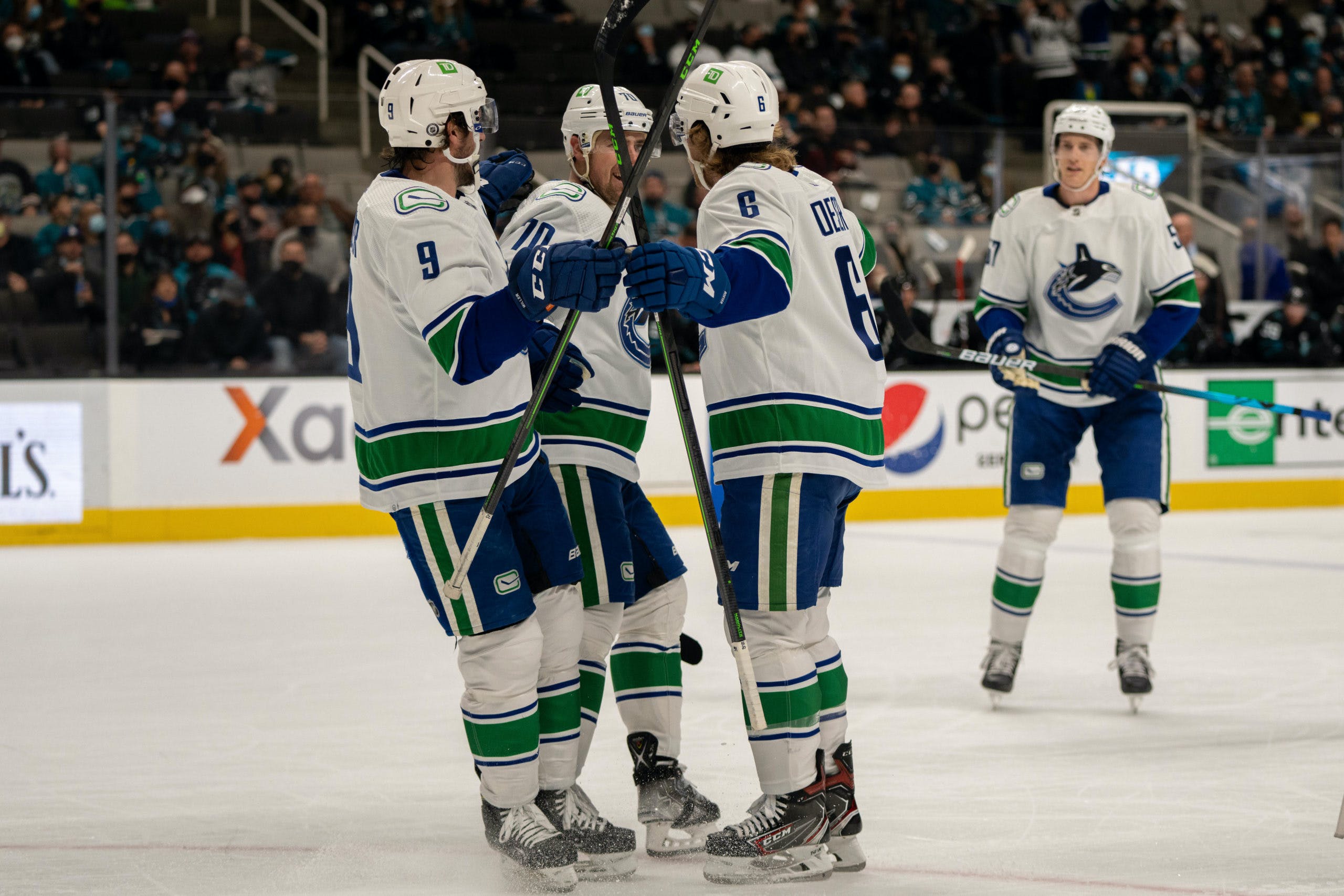 By Aleem Kheraj
11 months ago
Let’s face it. This team just isn’t good enough in its current form. The 7-4 clobbering at the hands of the Ducks proves that the Vancouver Canucks need an identity change and to shake off the shrapnel of the previous regime once and for all.
After the 7-0 cinderella run the Canucks amassed to start Bruce Boudreau’s tenure as head coach, we were all left wondering the possibilities of the “what if”.
What if this team stays red hot?
What if Travis Green was the problem?
What if this Canucks team is actually good?
However, since that run, the team has been very average, posting an 8-8-3 record. That’s barely good enough to be a legit playoff contender, let alone a real Stanley Cup threat. At the team’s current pace, the Canucks will likely finish in the all too familiar dreaded “red zone” of not being good enough to be in the playoffs and not quite bad enough to be a lottery team.
The fan base’s tolerance is wearing thin with this group with year-after-year underperformance even though the team spends to the cap ceiling. There is no doubt that the team’s bottom line is being impacted due to the lacklustre attitude many fans have about this current team.
This is why the Canucks need to do something at the trade deadline to inject life into the market.
Jim Rutherford’s hiring was sold to fans as finally having someone who has a genuine long-term vision, something this market has desperately needed for many, many years. Signs of that vision will need to be evident as the new regime approaches its first major milestone: the trade deadline.
There has been no shortage of rumours surrounding many notable Canuck players, including Brock Boeser and JT Miller. However, what has been interesting, is that many Canuck faithful are not balking at trading one and/or more of their core pieces to better the team’s prospects in the future. Usually, fan bases create a storm when the team is potentially trading away its top players, but for the most part, fans are seeming to embrace it.
This proves a couple of things. One, Canuck fans are knowledgeable, they understand that in order to actually turn the tide of the organization, it needs to capitalize on assets when they are at their peak. This team has notoriously been known for holding onto players for too long and getting nothing in return when the asset’s play unsurprisingly deteriorates. And two, fans are craving some direction. Whether it’s a full-on rebuild or a proper re-tool, the team needs a proper vision it plans to actually execute on.
The team’s cap uncertainty is no secret; and with Boeser’s $7.5M qualifying offer looming and Horvat and Miller’s contracts coming up in short order, there is little chance the team can retain all of these assets. Therefore, in order to maximize the potential return, now is the best time to sell some key talents with an eye to the future.
This is something the previous regime failed to realize and execute on. Too many times, the organization chased sneaking into the playoffs which has now left the team in cap hell with a bare cabinet of potential prospects. A trade that brings in picks and prospects is something this team desperately needs to ensure future long-term success.
With only one month until the deadline, Rutherford and co. have some hard-pressed decisions to make and fans will have a keen eye. However, one thing is for certain. The Canucks need to make a splash. Rutherford and Allvin need to prove that they are not like the previous regime and are willing to make the necessary hard decisions to fuel their vision for the team. If the Canucks stand pat and do nothing, the team could be in for one heck of a rollercoaster ride with their fanbase.
Uncategorized
Recent articles from Aleem Kheraj