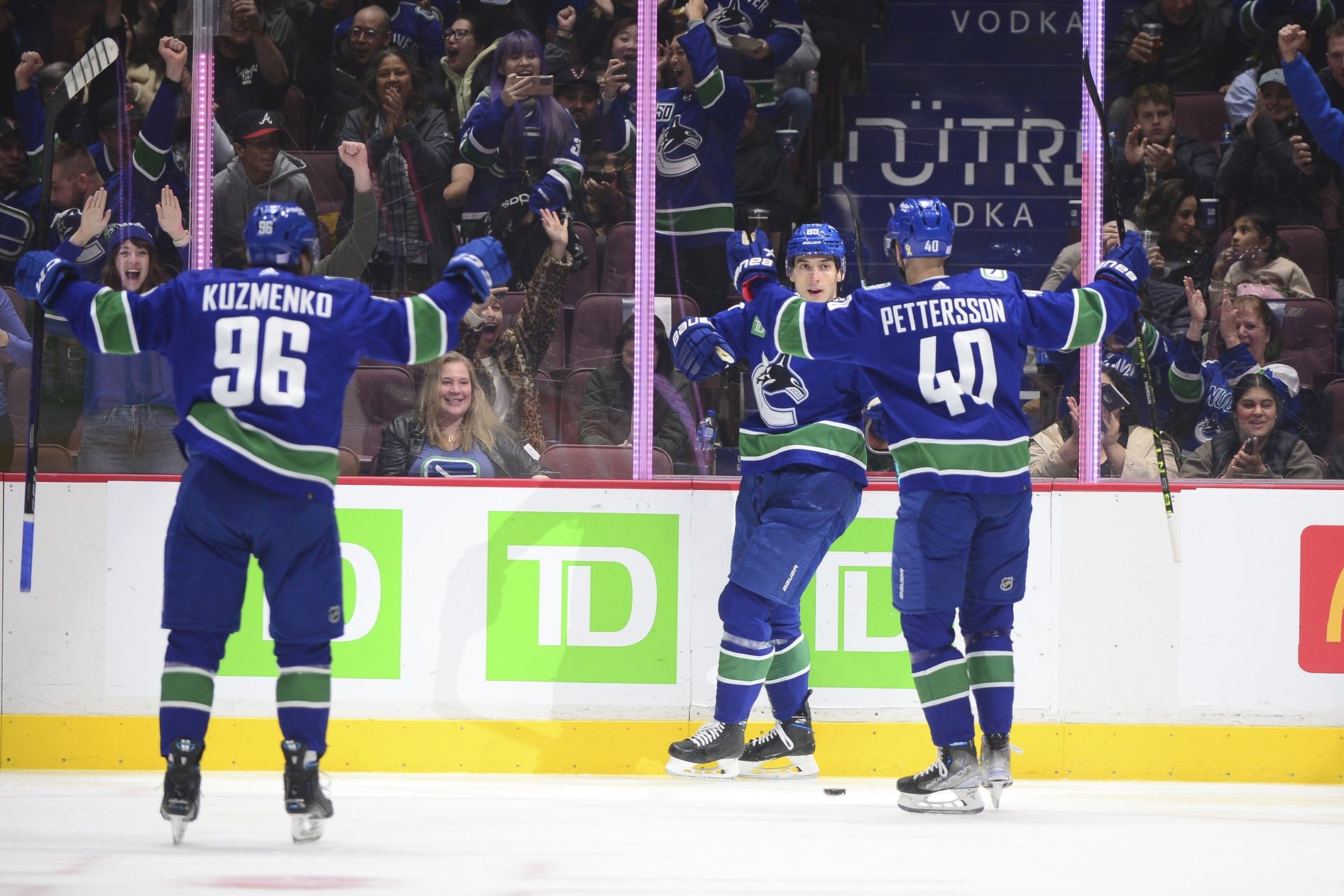 By Stephan Roget
2 months ago
Last week was a big one for the Vancouver Canucks, who picked up three wins out of four against conference rivals and — against all odds — got themselves right back into the playoff race.
But if it was a big week for the Canucks, it was an absolutely massive one for the line of Andrei Kuzmenko, Elias Pettersson, and Ilya Mikheyev. That unit combined for eight goals and 17 points on the week, an average of 4.25 per game.
With that performance, the trio has not only cemented their status as the Canucks’ definitive top line, but as one of — if not the  — most productive lines in all of hockey, period.
According to MoneyPuck, Kuzmenko, Pettersson, and Mikheyev have played approximately 132 minutes together thus far in 2022/23, which makes them the Canucks’ most consistent line and the 29th-most consistent line in the NHL.
And that’s about the lowest they’re going to rank in any statistical column from here on out in this article.
In terms of raw production, Kuzmenko-Pettersson-Mikheyev have been on the ice for 14 Vancouver goals, the third-highest total by any line in the league. The only two lines to have scored more have been the Jason Robertson-Joe Pavelski-Roope Hintz trio in Dallas with 19 and the Jack Eichel-Chandler Stephenson-Mark Stone line in Vegas with 16.
Both of those lines, however, have played more than 80 minutes more together than Kuzmenko-Pettersson-Mikheyev have.
When it comes to goals against, the Canucks’ top line have only surrendered four, meaning one for approximately every 45 minutes they spend on the ice together. Again, only the Dallas and Vegas top lines have a better ratio than them in this regard.
Given all that information, it shouldn’t take too much to figure out that the Kuzmenko-Pettersson-Mikheyev must pace the league in all per-minute-based figures, and by a long shot, at that.
It’s true.
Through those 132 minutes together so far, the Canucks’ top line has been scoring at a clip of 6.38 goals per 60 minutes. In other words, they’re scoring nearly a goal-and-a-half for every ten minutes they spend on the ice.
That’s a simply remarkable stat, and it is indeed the highest rate in the league by a considerable margin. Second-place falls to the St. Louis line of Josh Leivo, Ryan O’Reilly, and Brandon Saad, who have only played 81 minutes together and have averaged 5.89 goals per 60 minutes.
Third-place goes to the Florida line of Matthew Tkachuk, Aleksander Barkov, and Carter Verhaeghe with 5.8 goals-per-60.
No other line has more than 5.3 goals-per-60.
That means that, not only are Kuzmenko-Pettersson-Mikheyev outproducing every other NHL line on a per-minute basis, they’re doing it to the tune of a full extra goal-per-ten-minutes over all but two of them.
That’s not just dominance, it’s exceptionalism.
Their goals-against-per-60, for the record, is a slim 1.82, good enough for 26th best in the league overall, and 17th amongst lines that have played at least 100 minutes together.
Let’s not lose sight of what that means: the Kuzmenko-Pettersson-Mikheyev line is arguably one of the best defensive lines in hockey, in addition to being inarguably the best offensive line in hockey.
A quick traipse through the analytics shows that the still-unnamed Canucks trio don’t just have the results, they also have the underlying numbers to prove that they’re not just getting lucky.
The line’s expected goals rate is 60.9%, good enough for 17th best in the league. That means that they should have been expected to score at least seven goals so far, which is half of what they’ve actually got, but either way they’re well within the upper tiers of the NHL.
And as a naturally efficient unit, the fancy stats should be expected to skew against the Kuzmenko-Pettersson-Mikheyev line, anyway. Most analytic models are built heavily upon shots, shot quality, and scoring chances, but the Canucks’ line makes the absolute most of every opportunity, keeping their raw shot and chance numbers down.
To wit, the Kuzmenko-Pettersson-Mikheyev line has only needed to make 121 shot attempts in order to score 14 goals. That’s shot attempts, by the way, not shots. This line is needing fewer than ten shot attempts to score each goal, and that’s just silly.
The number of those shots to go unblocked is only 96. A total of 14 goals on 96 shots gives this line a collective shooting percentage of 14.6%. (And that’s a group stat we just came up with, so don’t expect to read it anywhere else.)
A player scoring at that individual rate would be considered a sniper. What’s it mean when an entire line is doing it?
Good things, if you’re the Vancouver Canucks.
Say what you will about the offseason that the Canucks had and their up-down start to the season so far. What is clear is that, in Kuzmenko and Mikheyev, the Canucks have gone out and acquired the perfect wingers for their franchise centre.
How rare is it for just one free agent to arrive on a team and fit in so seamlessly onto the top line? How rare is it for two to do so in the same season?
We can’t think of any other examples, and we’re not going to waste too much time pondering it.
Clearly, and as the numbers tell it, Kuzmenko-Pettersson-Mikheyev are in a class of their own.
Editorials
Recent articles from Stephan Roget