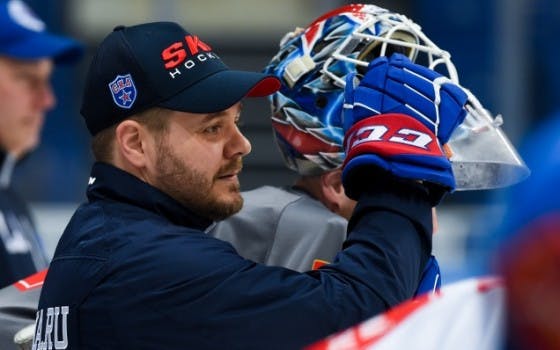 By David Quadrelli
5 months ago
The Vancouver Canucks have signed Marko Torenius as the new goaltending development coach and goaltending coach of the Abbotsford Canucks, the club announced Tuesday morning.
The job was vacated when Curtis Sanford left to take a well-deserved NHL coaching job with the Toronto Maple Leafs.
Torenius, a native of Helsinki, Finland, has spent the past six seasons as the goaltending coach for SKA St. Petersburg.
He is credited — along with Rashit Davydov — as one of two goaltending coaches to develop New York Rangers goaltender Igor Shesterkin during Shesterkin’s five years with SKA.
“We are very happy with the staff that has been assembled for the upcoming season,” said Canucks GM Patrik Allvin. “Ian Clark and Marko Torenius will be a great tandem in strengthening and developing our goaltending pool.”
“Marko brings a wealth of experience to our group,” said Abbotsford GM Ryan Johnson. “He has worked with and developed some of the best goaltenders in the world, and we are ecstatic that he is bringing his talents to the Canucks organization.”
Torenius has an exceptional understanding of modern-day goaltending and movement — as outlined in this interview he did with InGoal Radio — and should be a great fit in Abbotsford.
Based on Torenius’ philosophical approach and what we know about him, this appears to be a hire that Canucks director of goaltending Ian Clark certainly approves of.
Not that long ago, Clark arranged for Canucks Finnish prospect Aku Koskenvuo to skate with Torenius in Finland.
Torenius will now be immediately tasked with further developing 21-year-old Latvian netminder Arturs Silovs, whose natural abilities and skill set have many in the Canucks organization believing he can be a star one day.
Prior to joining SKA, Torenius spent parts of two seasons as goaltending coach of the KHL’s Sibir Novosibirsk and seven seasons as team manager and goaltending coach of the Espoo Blues of the SM-liiga.