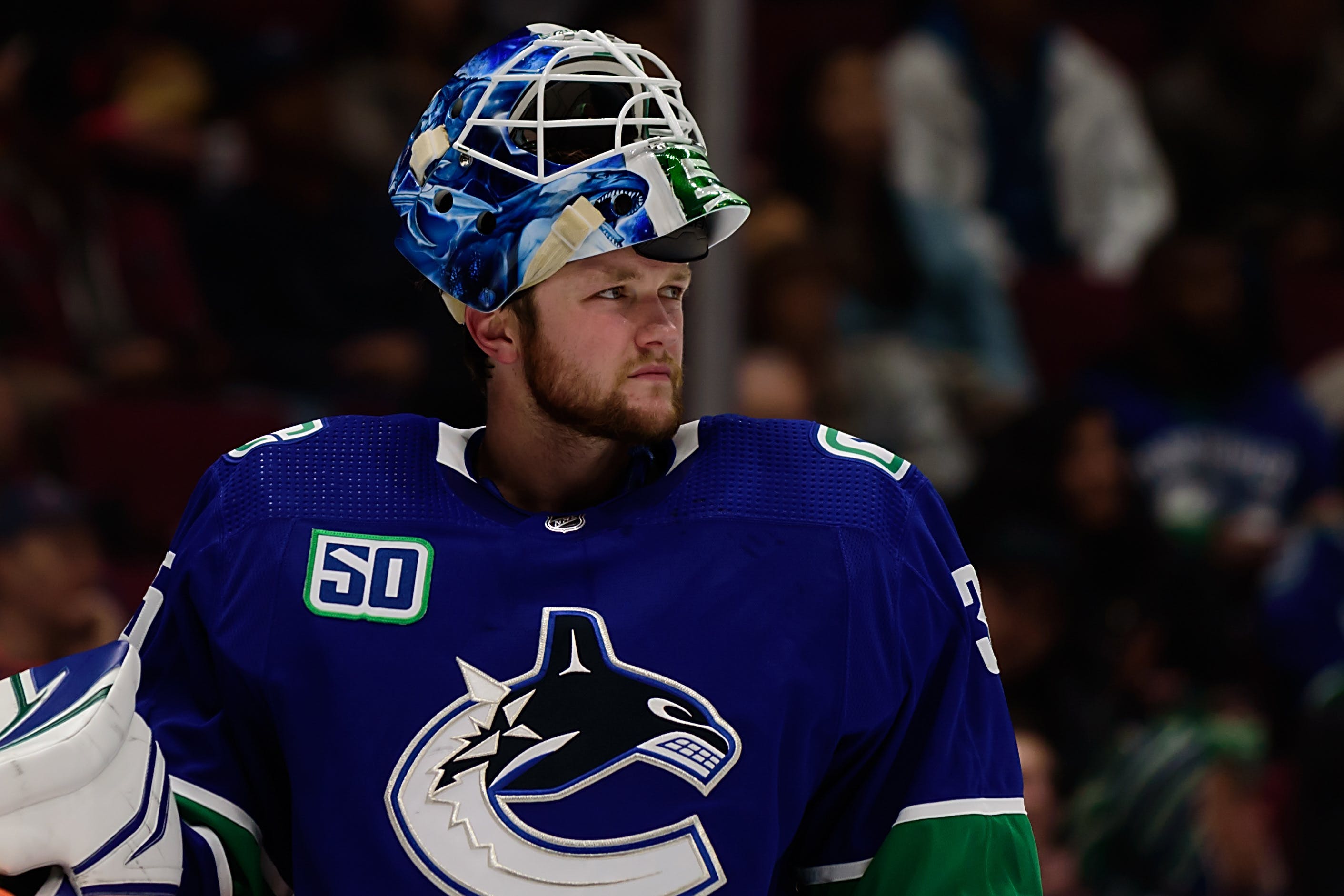 By David Quadrelli
10 months ago
Folks, this is a story for the ages.
Vancouver Canucks goaltender Thatcher Demko joined the Spittin’ Chiclets podcast and recalled the time he was robbed at gunpoint while playing in Utica as a member of the Comets.
Here’s the full transcript of Demko’s story:
Parts of this story have been edited for clarity.

“Dude, I got robbed at gunpoint in my own crib. It was actually after the gold medal game of World Juniors — I think it was the year that US beat Canada in a shootout… I was living with Jordan Subban at the time and Subby had gone to bed around like 10:30 11 o’clock or whatever, so I was a couple hours behind him.”
“I was just dozing off and the back door of our house didn’t lock, so I heard the back door open and I was like — you know — Subby and I had banter back and forth as roommates so in my head I’m like ‘what the f*** is Subby doing?’ like I’m trying to fall asleep. And I hear like wet shoes on the hardwood floor and I’m like, ‘that’s kind of weird’, maybe Subby’s getting something. So I called him, and I could hear him in his room across the hall, and I can also hear like noises out in the living room.”
“I don’t know, you always hear s*** in your house and you go out and check and there’s nothing there. So I just got out of bed in my boxers and I’m like walking down the hall and this dude turns the corner, he’s got like, all this s*** in his arms and I was like, ‘what the f*** are you doing?’ And he’s like, ‘I’m taking your s***’. I was like, ‘woah, okay goddamn do you need a hand or something?'” Demko said with a laugh. “It definitely wasn’t his first time doing it.”
“I was rattled, he only ended up taking the Xbox’s but I followed him out into the snow and I was still in my boxers and I like put my hand on him and was like ‘hey man, if you just give us the stuff back I won’t call anyone, like no harm, no foul, whatever. He kind of switched the stuff over into his other arm and pulled a gun on me, and I was like ‘hey man, go ahead’.”
“So he got in the car and they started driving away. I ran inside and grabbed my phone and chased after him and I took a couple pictures of the license plate — actually I’ve still got them on my phone. When the cops showed up, I just showed them the plate numbers and they found the guy in like 10 minutes.”
“So we ended up going to the police station and had a game the next day. I remember I called Greener [Travis Green] cause he was my coach at the time, and I called Greener at like four in the morning, I’m like, ‘hey, I just got f****** robbed, like I’m in a police station, like this is crazy and I just wanted to let you know.’ And he’s like ‘alright I’ll see you for morning skate.’ F***,” Demko said with a laugh when retelling that part of the story.
“It was a wild experience, man. I got lucky. I mean, it’s kind of stupid chasing after him in hindsight, but you know, you always watch these movies and you’re like, ‘f***, if I ever got robbed I’d just beat the shit out of the guy’ but when it actually happened, it’s kind of like, I froze, man. I was like, I don’t know what the f*** to do here.”

But the story gets even crazier, as Demko explains why he and Subban’s back door wasn’t locked in the first place.

“We were bitchin’ at our landlord like the whole year really. We were like, ‘hey, like this f****** door doesn’t lock’. She was the sweetest woman, she was like 95, she went to church like three times a week, and she was like ‘yeah, yeah I’ll check it out’. And you can’t really lay into her, you know? She was too nice.”
“The funny thing actually was it ended up being her son who set us up to get robbed — it was so set up. Like, the guy had a van waiting, so they were gonna swipe the whole house because we played the next night and then we were supposed to go out on the road.”
“This is what the DA ended up telling us, he was like, the guy [the landlord’s son] kind of got caught up in this drug predicament where he couldn’t pay this guy and he was like, ‘hey, these guys [Subban and Demko] are going on the road, they’re not gonna be there,’ but he mixed up the date by one day. He’s like, ‘the door doesn’t lock, you can go swipe the whole house and we’ll call it even.’ The guy just messed up the date by one day and ended up getting I think 10 years.”
“We had to go on trial and everything, like I had to testify and go in front of the jury and stuff… It was actually worse than the robbery, honestly. You’re going in and like, I don’t know, you don’t want to be a rat or anything, you know? I don’t know, it’s tough calling the guy out right in front of him. They made me like stand up and point him out, like physically point out and be like, ‘this is the guy that did it'”

You can listen to the full episode of Demko’s podcast appearance here.
Uncategorized
Recent articles from David Quadrelli