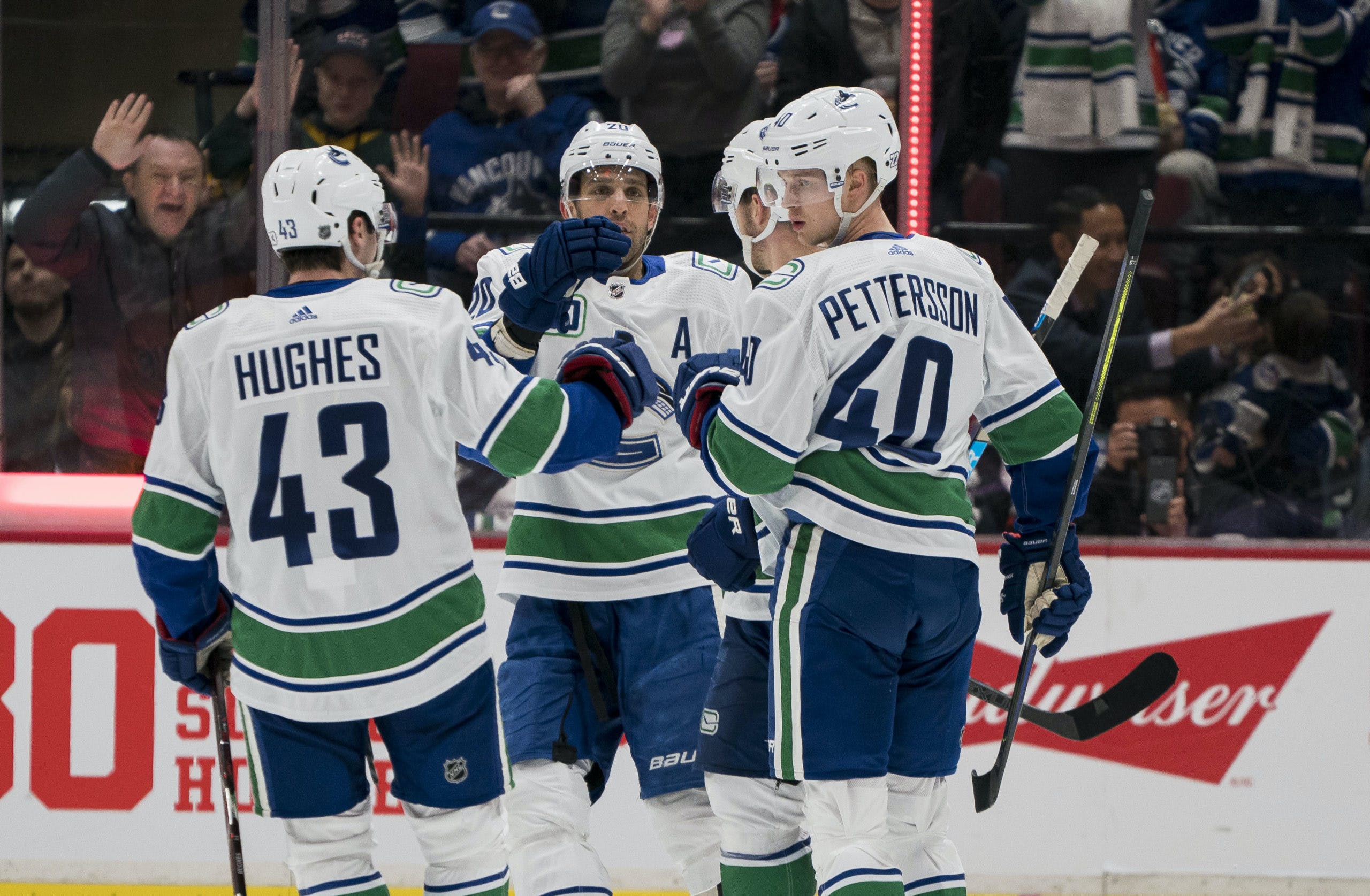 By Josh Elliott-Wolfe
1 year ago
It’s been a long time coming, but after months of hand wringing and negotiations, it seems like Elias Pettersson and Quinn Hughes have finally signed their next contracts with the Vancouver Canucks.
Hughes’ contract reports came down first:
Followed quickly by details on Pettersson’s deal:
The big question now is, did the Canucks get fair value on their two young stars?

Starting with Hughes, there have been some very recent comparables that both sides of the negotiation would have been using.

The most direct comparable is obviously Cale Makar as the two have been pitted against each other often throughout their short careers. The difference is that while both players were relatively competitive in their rookie seasons… 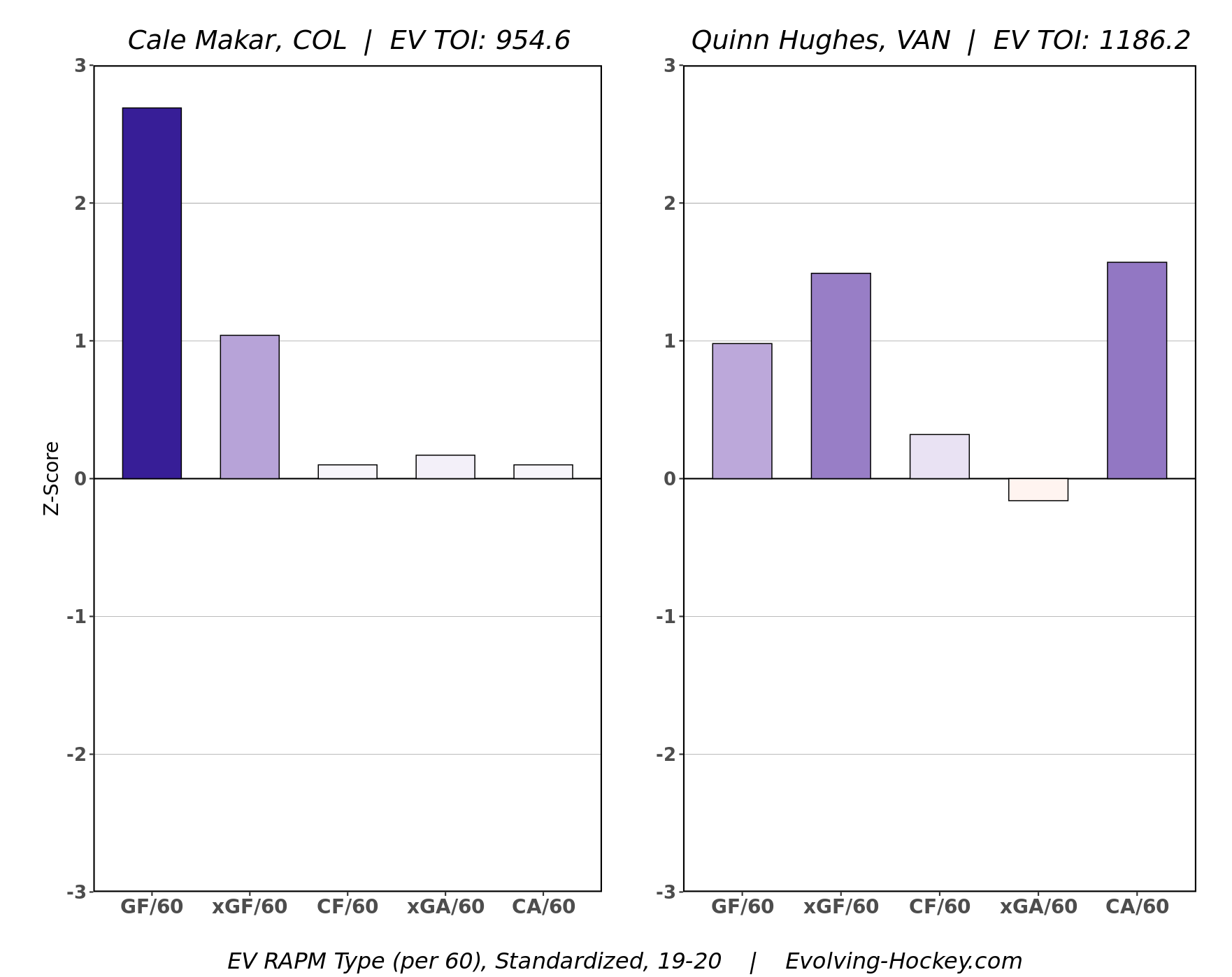 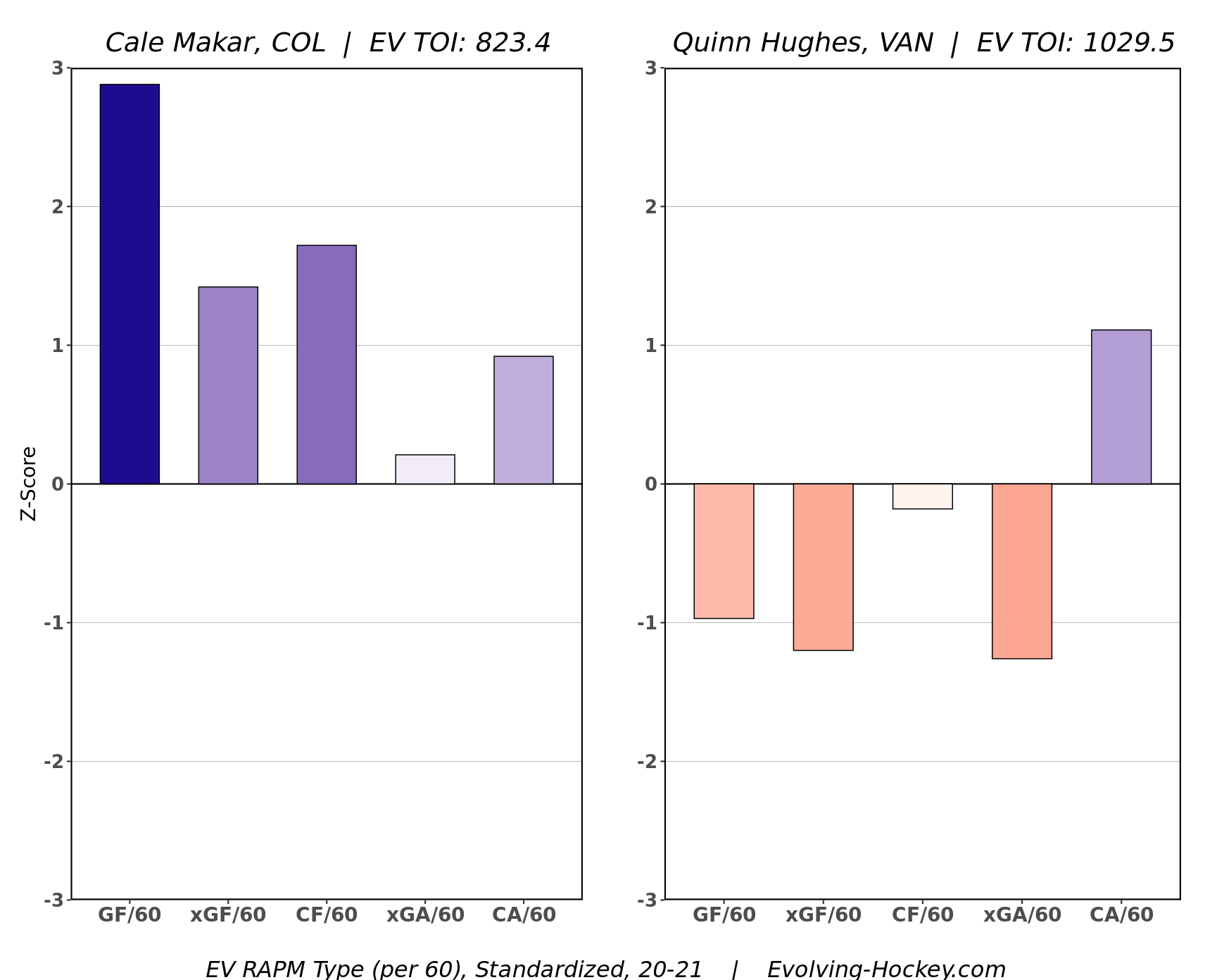 It is fair for the Canucks to bet on a bounce back as the team improves and Hughes continues to round out his game, but the argument could be made that there is bigger than a $1.25 million dollar gap between the players. That is the risk the Canucks are taking in signing the contract, but there is also the very real possibility that Hughes has more success this year on a team that has raised the talent floor of their roster. The last two or three years of Hughes’ deal, specifically, could end up being where the Canucks get the most value if the defenceman starts trending upwards again.
Also, the Canucks don’t have the benefit of being a Stanley Cup contender like the Avalanche do, which can generally bring the price of any contract down. On top of that, it’s hard for any player to make too much in Colorado when Nathan MacKinnon has the most team-friendly deal in the NHL.

When it comes to Dahlin, the Buffalo Sabres may be struggling more than the Canucks, but they also had much more cap space to afford an overpayment. It’s hard to say that Dahlin has lived up to his potential so far in Buffalo, though it’s hard for any player to thrive in an environment like the Sabres have had throughout the past few seasons. They obviously paid Dahlin for what he could potentially be, but based on past performance, he probably should not have commanded $6 million per season over three years, especially when he remains an RFA once the contract expires.
That contract was probably a negative for the Canucks during negotiations, as not only was it signed within ten days of the Hughes news, but it was much more player-friendly than the Makar deal. Once Dahlin signed for that much, it was tough to see how the Canucks would be able to get Hughes around the same price if they were aiming for a long-term contract. Because of that, there is probably a bit more value, especially long-term, in the reported Hughes deal than there is with Dahlin with Buffalo.

With Heiskanen in Dallas, the Stars were the only team that went the for the full eight years at $8.45 million per season on the second contract. They bought four UFA seasons with that deal which likely drove the price up a bit, but Heiskanen is a very close comparable for Hughes as well. Heiskanen may not be as dynamic as Hughes is offensively (though he’s no slouch either) but Heiskanen does play a more well-rounded game and has another full season of experience under his belt.
That could benefit the Canucks as there’s a good chance that Hughes would prove that he deserves more money than Heiskanen in that season, but that’s the benefit of the Canucks allowing Hughes to burn a year off his rookie deal at the tail end of 2018-19. Overall I would say the value in the Heiskanen and Hughes deals are very similar, though Hughes does have a bit more upside.

The final comparable signed this summer was Zach Werenski’s contract in Columbus. This one is different than the other four as Werenski signed a three-year bridge deal with the Blue Jackets before signing a six-year contract at $9.58 million per season this Summer. Werenski being 24-years old means the Jackets have bought five UFA years, which again will drive the price of a contract up.
The reason this deal is comparable is because Werenski is a benchmark of what Hughes could be on the back-end of his contract. Werenski’s second contract was a three-year deal worth $5 million per season following a year where he put up just over .5 points per game and was sub-par defensively: 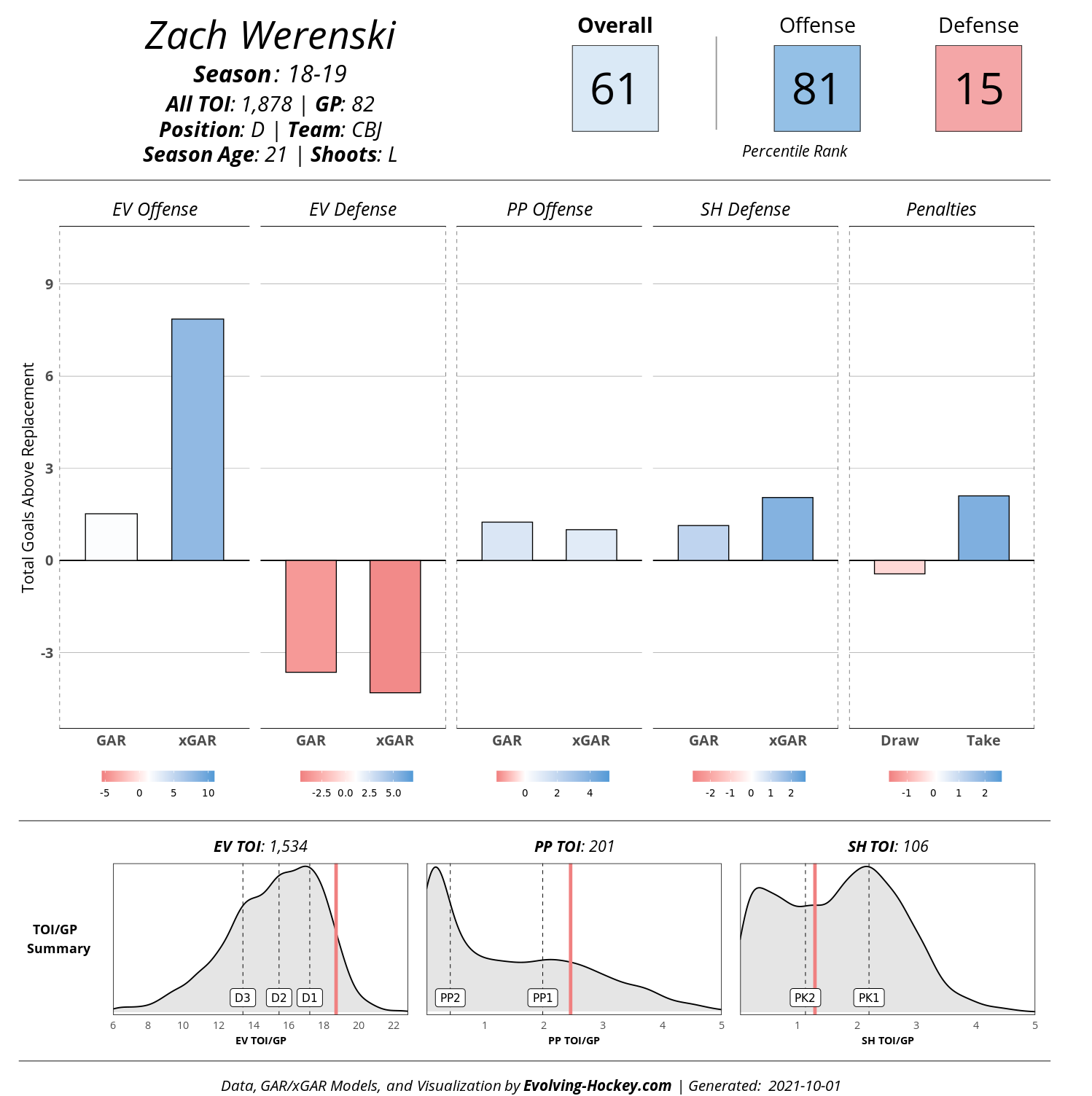 Compare that to Hughes last season, who put up .73 points per game and struggled defensively: So obviously the Blue Jackets decided to wait and see what Werenski turned into, which drove the price up for the six-year contract he signed this past summer. Werenski not only improved offensively over the years, but started playing better defensively as well: 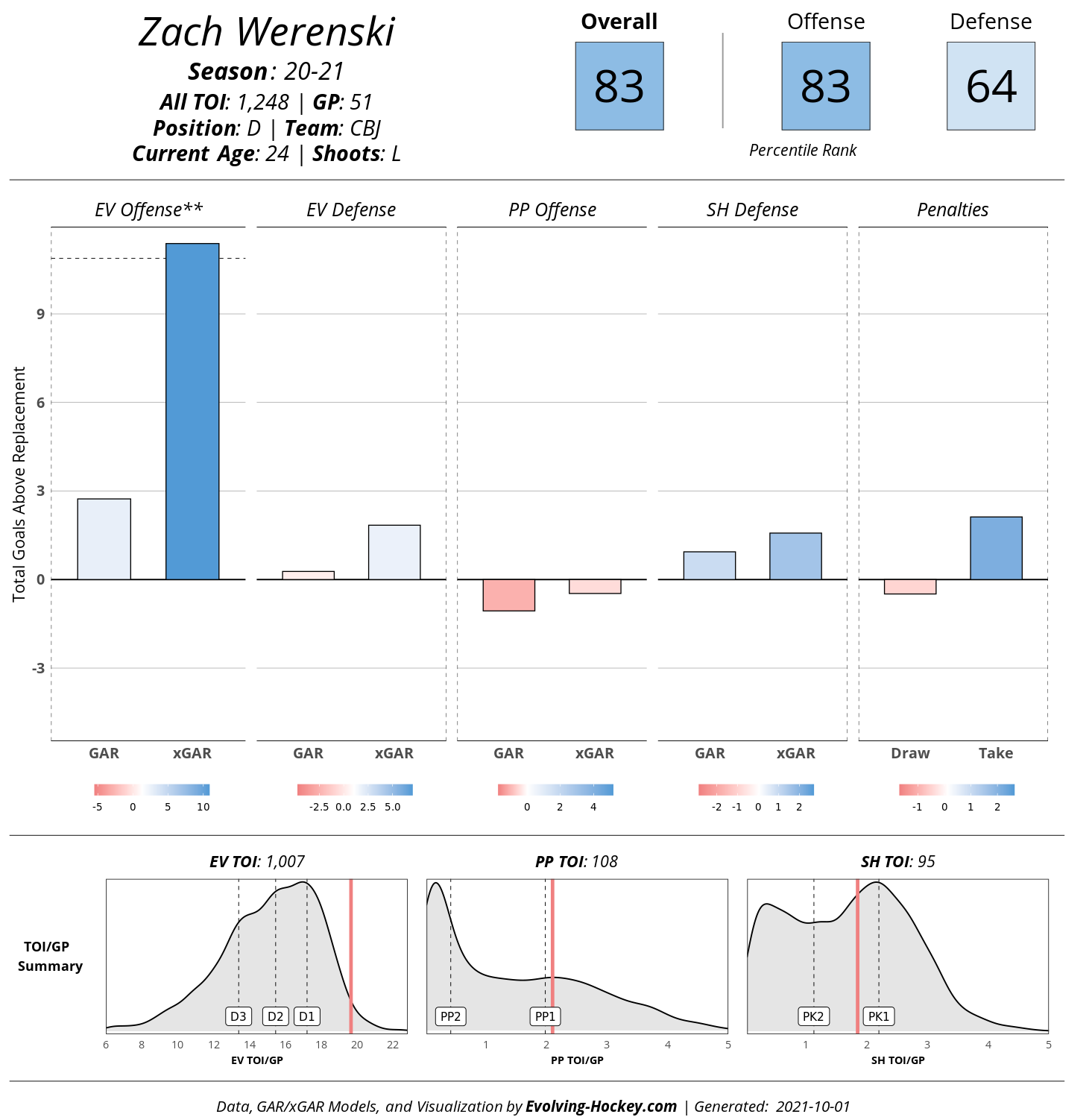 There is potential for similar growth in Hughes’ game, especially if the Canucks can find someone to consistently play on his right side. If Hughes can grow in a comparable way to Werenski within the first two or three years of his new contract, those remaining years could be where the Canucks really make up the value.
Compared to his peers, Hughes falls relatively in line value-wise with the other contracts, though Makar is likely the real steal of that group. The real potential for the Canucks to find more value on Hughes is the final three years, which coincidentally, is when Pettersson will be looking for his third contract.

While Hughes’ value may come in the second half of the contract, Pettersson will be able to immediately perform at a $7.7 million dollar level (or more) if he picks up where he left off last year. Not only is Pettersson elite offensively, but he is one of the best young centers defensively in the league as well, as evident by his first three seasons in Vancouver. 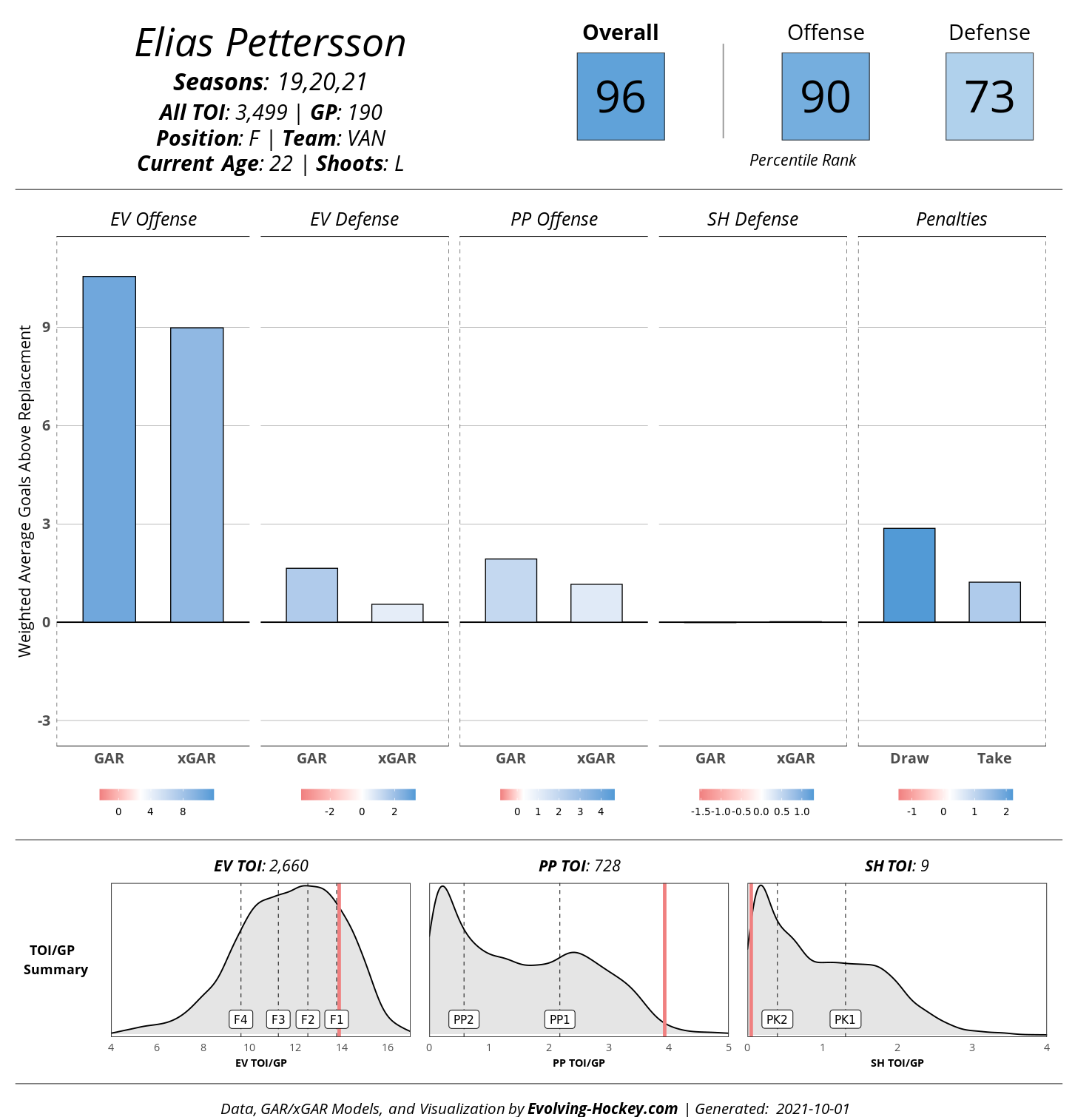 Pettersson being able to match his contract’s value is great for the Canucks in the next three seasons, but it will also make his next contract all that more expensive.

Point signed a three-year bridge deal worth $6.75 million per season in Tampa Bay in 2019 and has already signed his next contract for eight years at $9.5 million per season.
Point had a very similar track record to Pettersson on his entry-level deal: 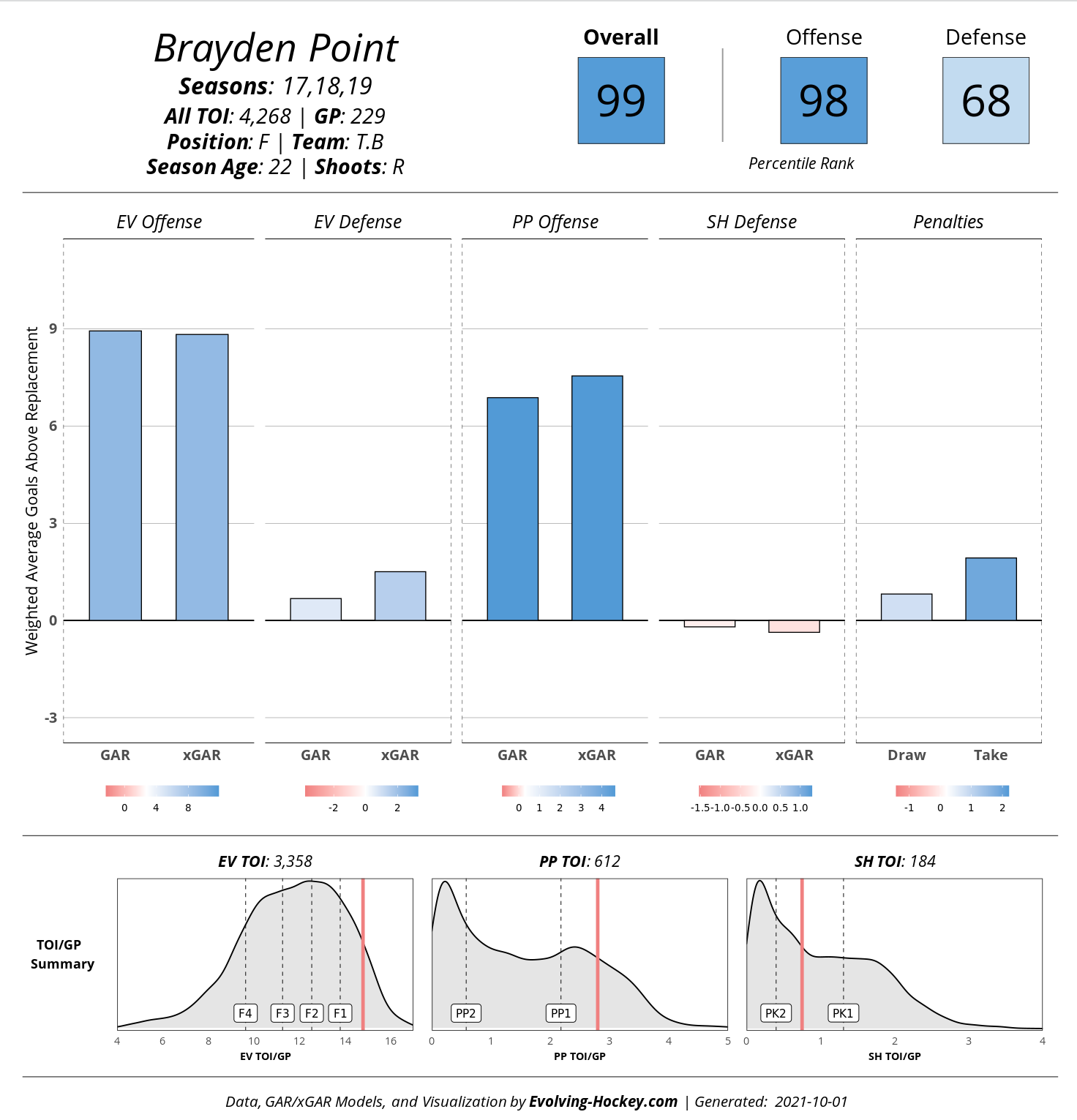 The Lightning did get a bit of a better deal on their bridge deal with Point as he took up around 8.3% of Tampa’s cap space, whereas Pettersson is taking near 9.5% of the Canucks’ cap space heading into the season. The difference is the Lightning were already threatening to win the Stanley Cup and had a roster full of elite players, so Point was likely more willing to take a little less to make sure the rest of the team could stay intact. Point has obviously stayed elite throughout the past couple years, but so have the Lightning, and because of that it seems like he will likely still be a bit of a steal for Tampa Bay even at $9.5 million per season starting in 2022-23.
The Canucks obviously don’t have that same guarantee with Pettersson, but that Point deal will likely be a comparable for the Canucks when they start negotiating Pettersson’s third contract. Again, the value on Pettersson’s new deal is likely already a good deal for what he provides for the team, especially without the supporting cast of Point in Tampa.

The other main comparable would be Barzal with the Islanders. Both Pettersson and Barzal are near point-per-game players and have been steady throughout their first few years in the league, though Barzal struggled more defensively on his rookie contract: 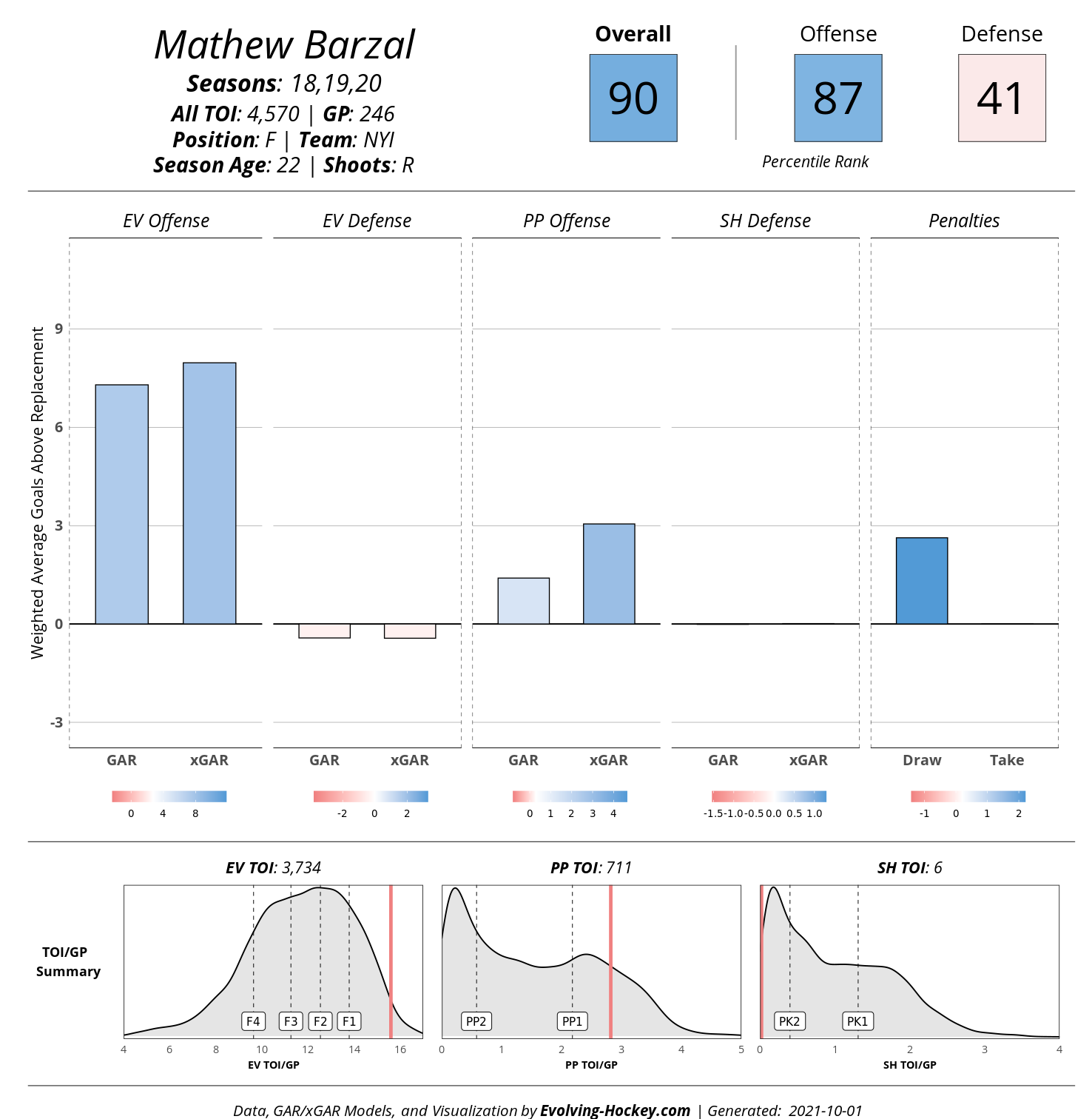 Barzal signed at $7 million per season over three years and is in the second year of that contract. This one is probably a more direct comparable for Pettersson as the Islanders don’t have the same benefit that the Lightning do when it comes to signing team-friendly deals. Pettersson has shown that he is a better all-around player than Barzal already so that’s likely why Pettersson makes $700k more per year.
Personally, I thought the Pettersson deal was going to come in north of $8 million per season regardless of term, so in my eyes, it’s a win for the Canucks to get that deal done for the price they did, especially with Brock Boeser’s deal expiring at the end of this season. The drawback is that the Canucks are going to be in for a very difficult negotiation a few years from now when they have to try to lock Pettersson up into his thirties. The contract does have the potential to be a steal over the next three years though, which could give the team some much-needed flexibility cap-wise.
The Hughes deal does have the potential to be a bit of an overpayment, especially in the short-term, but if he keeps trending in the right direction the Canucks may be getting the better end of the deal by the end of the six years. Combined, getting both Pettersson and Hughes for around $15.5 million per season is likely fair value based on other contracts handed out to comparable players over the past few seasons.
The big win for the team was getting the deals done before we got too close to the season, as the Canucks will need their two biggest pieces to be on top of their game if they want to get back to the playoffs.
Uncategorized
Recent articles from Josh Elliott-Wolfe