As Canucks’ Eastern road trip looms, the time for moral victories is over 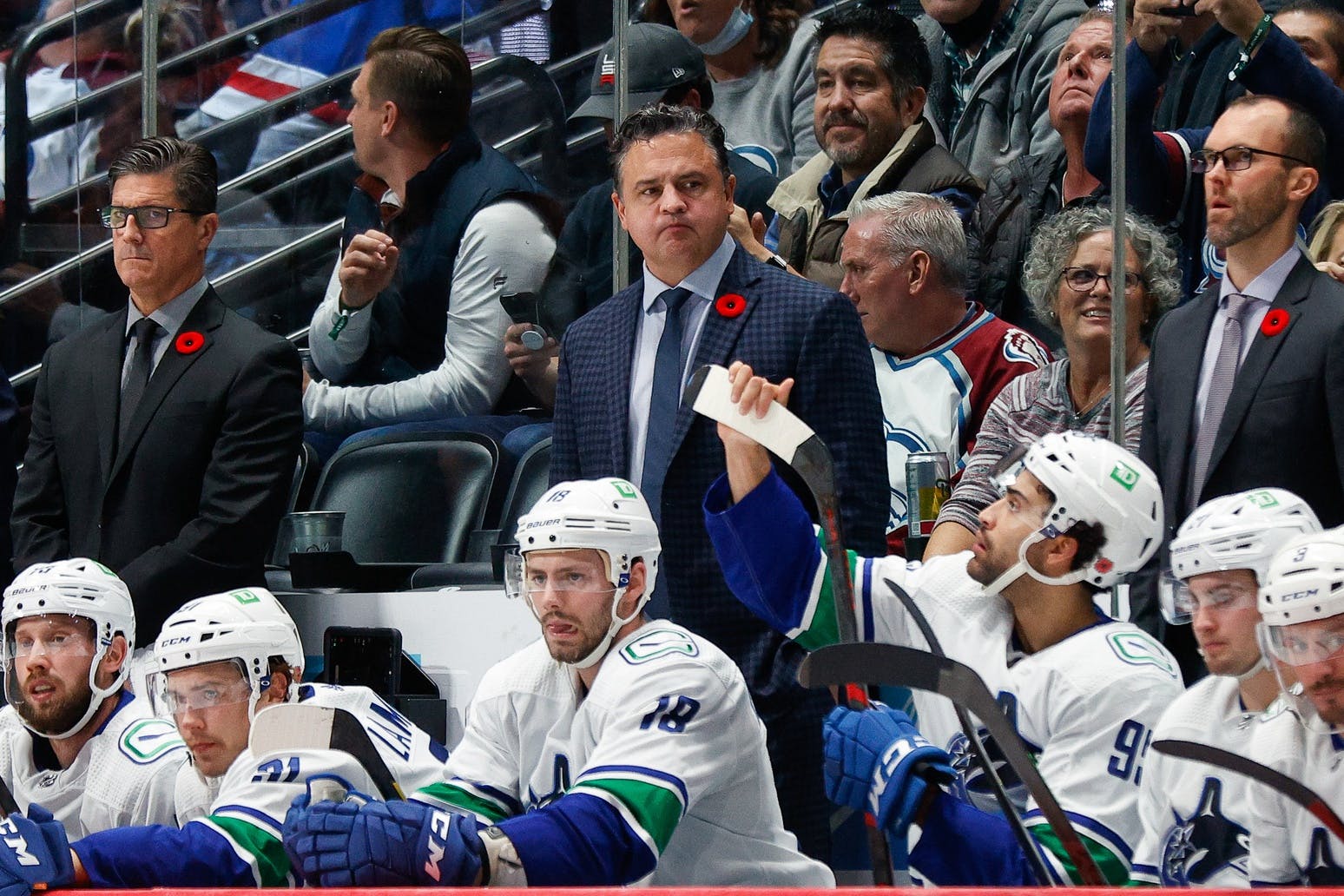 By Lachlan Irvine
1 year ago
The Canucks shutout loss at the hands of Marc-Andre Fleury and the Chicago Blackhawks on Sunday may not have made a statement about the overall effort from the losing side. But it did tell us just how small the expectations for this team currently are.
If you asked Travis Green, the overall effort he saw from his team in the 1-0 defeat seemed to make up for coming away empty handed. “It’s frustrating that we lost tonight. I’m not disappointed in how we played,” Green said after.
“Probably take that game every night, probably win it eight or nine times out of 10.”
Those sentiments were also echoed by a lot of fans comparing Sunday’s effort to other recent losses. “But they played better than the Hawks! They hit a few posts! It just was just a game that didn’t go their way, moral victories right?”
But the truth is, the moral victory ship left the docks a while ago.
Every team is entitled to a few mulligans each season; the better you are on a regular basis, the more off nights you earn the benefit of the doubt for as the year moves along. But for clearly struggling teams like the Canucks, there comes a point where moral victories are straight up meaningless without a few actual wins stacked around them.
Sunday night against the 26th placed Blackhawks was that point for Vancouver. The bar of expectations has never been lower for the current Canucks core, and yet they failed to score a single goal.
Despite peppering Marc-Andre Fleury with 40 shots on goal, Natural Stat Trick credited the Canucks with just nine high danger scoring chances, six of which came in the first period. Compare that to the Blackhawks, who had six high danger scoring chances on 24 shots, including three in the final frame. 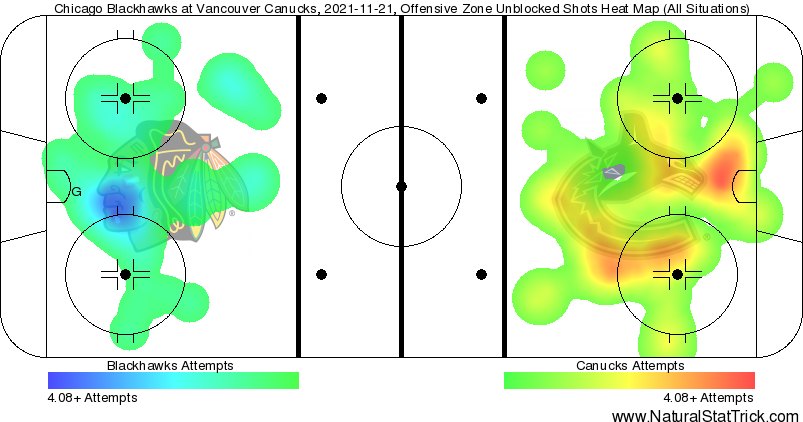 Shot heatmap courtesy of Natural Stat Trick.
As soon as Brandon Hagel deflected in the eventual game winner early in the third period, the first 40 minutes where Vancouver dominated Chicago stopped mattering. The question from then on was how the team would respond, with 15 minutes left against an exhausted Hawks team playing its second game in as many days.
The Canucks answered with a period that featured an abysmal eight minute stretch between shots on net, and a sequence during the final minute of play where Alex Chiasson spent a little too long as the sixth man when the Canucks were desperate for a goal.
It’s clear Vancouver is in desperate need of positives to build off of, and their best opportunity is potentially just arriving in the form of a five game Eastern road trip, beginning in Pittsburgh on Wednesday night. The opponents Vancouver will face over the next week could prove to be the ultimate litmus test for the current roster, both in skill and mental resolve.
The first leg of the journey pits them against the Penguins and Blue Jackets, the two clubs currently holding onto both of the Eastern wild card spots. The final three games take the Canucks through the Atlantic Division against the Bruins, Canadiens and Senators, all of which currently sit out of the playoff picture altogether.
If Vancouver wants to put fans’ minds at ease, it’s going to take regular strong showings and a winning record over the next five games to accomplish that. Regardless of how much they’ve struggled all season long, there’s still too much talent across the Canucks’ lineup for “good enough” to be considered successful. Until they hold themselves to a higher standard and start expecting real results, no one else will.
The time for moral victories has passed. It’s time to get a taste of the real thing before it’s too late.
Uncategorized
Recent articles from Lachlan Irvine