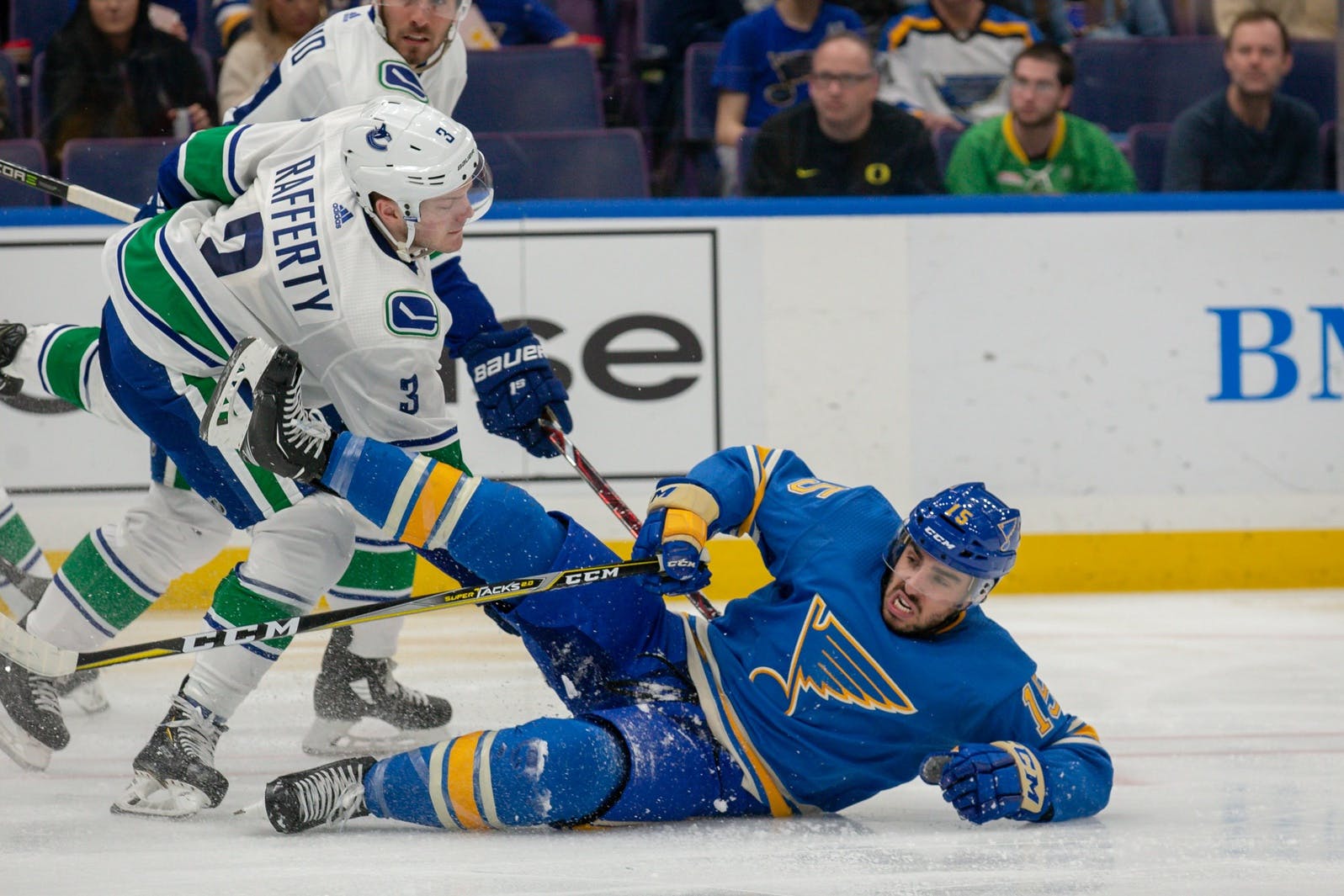 By Stephan Roget
1 year ago
The super-dense stretch-run is upon us.
Depending on when you’re reading this, the Vancouver Canucks will either have 14 or 15 games left on the docket, to be squeezed into the next three-and-a-half weeks.
And no matter how well their improbable run at a playoff spot continues, the Canucks are going to be facing a crisis of exhaustion, fatigue, and possibly injury as they close out the 2021 season.
But our misunderstanding of foreign languages teaches us that with any crisis there must also come opportunity, and that’s certainly no different than the Canucks.
While regular skaters are probably looking at the remaining schedule and groaning, there are also those on the periphery of the team, those prospects who have been developing patiently in the wings, who are looking at it and grinning — because they know that the condensed schedule is the chance they’ve been waiting for.
Simply put, not getting these folks into the lineup for at least a game or two down the stretch would mark a unique opportunity missed. Doing so wouldn’t just give these players an audition, it would also allow the Canucks to see what sort of talent they might have lined up for next year, on top of allowing them to engage in some much-needed load management of their veterans.

Way back in November of 2020, we had Rafferty ranked as the Canucks’ sixth-best prospect, and it wasn’t hard to see why. Rafferty got a relatively late start to the professional game, playing three full seasons at Quinnipiac University before joining Vancouver as a free agent a couple of months before his 24th birthday. But since then, he seemed to do everything right. In his rookie campaign for the Utica Comets, Rafferty clocked in with a ridiculous 45 points in 57 games, good enough for an appearance in the AHL All-Star Game and a place on the year-end Second All-Star Team.
Earning accolades from the organization that signed him, however, has been a more difficult endeavour for Rafferty. Despite that dominant rookie season, Rafferty wasn’t called up at all last year — and when GM Jim Benning was given the opportunity to talk up his prospects, he seemed to give shoutouts to everyone but Rafferty.
He’s been with the Canucks for the entirety of the 2021 season, but almost exclusively as a member of the taxi squad. Rafferty has played exactly one game of any kind in the last calendar year, a January 21st matchup against the Montreal Canadiens in which he notched his first NHL point.
So what gives?
Clearly, the organization has reason to believe that Rafferty’s offensive dynamism will not transfer from the minors to the big leagues, otherwise one would expect him to have received more of a shot this year — especially with names like Guillaume Brisebois and Jalen Chatfield making it into the lineup before him.
And, sure, this market has seen its fair share of star AHL defenders unable to cut it in the NHL: Marc-Andre Gragnani, Derrick Pouliot, Philip Holm; the list goes on.
But either way, shouldn’t they try to find out for certain? Especially given that the now-25-year-old Rafferty is a pending UFA?
There may only be a slim chance that Rafferty can skate a regular shift in the NHL in the long-term, but at this point, that’s a chance the Canucks can definitely afford to explore.
We’ve seen what they have in Chatfield, now let’s see what they have in Rafferty before it’s too late.

Lind is a player who is used to waiting. On draft day, he went so long without selection that Benning famously wondered, “Why isn’t anyone taking Kole Lind?!” Nearly four years later, Lind is still waiting for his first NHL action.
But he won’t be waiting much longer.
With Lind officially on the taxi squad after a second consecutive breakout season with the Comets, there’s a large contingent of the fanbase who have taken to checking Brendan Batchelor’s line reports on the daily — and then cursing when Lind’s name isn’t listed.
This season, Lind proved himself as a long-term option at center, becoming Utica’s top pivot and bumping his production up to a point-per-game pace. Combined with his tenacity, truculence, and two-way sensibilities, there are those who think Lind will soon be the Canucks’ best option at 3C.
What’s the harm in giving him an early taste of the NHL pace, with an eye toward him coming into training camp and competing for a job at the center position? What’s the harm in making extra sure he’s worthy of expansion protection?
And what’s the harm in giving the fans what they want?

Rathbone spent a good chunk of the early season on the taxi squad, never managing to get into an NHL game, and was then sent down to Utica, where he responded with an eye-popping nine points in eight games. To wit, that production has Rathbone ranked seventh overall in Comets scoring, with each player ahead of him on the list having played at least five more games than he.
Following the Canucks’ post-COVID return-to-play, Rathbone was recalled back to the taxi squad, and there he’s remained — but one has to think that his time is nigh.
The presence of Quinn Hughes, Alex Edler, and Olli Juolevi on the left side is currently keeping Rathbone on the outside looking in, but even if all three of them stay healthy down the stretch, it should definitely be in the plans to give them each a night off or two and slide Rathbone in to replace them.
Given how quickly Rathbone has adapted to the pro game, it seems prudent to get him up to NHL speed as soon as possible, because that’s the speed he’s going to be playing at for a long, long while.

No player has seen their intraorganizational stock soar in 2021 like Gadjovich. As of this writing, Gadjovich has a preposterous 12 goals in 17 games for the Utica Comets — and we say “as of this writing” because there’s a decent chance he just scored again while we were typing this.
Gadjovich’s 14 points is good enough for third in Comets scoring, and those 12 goals have him in a tie for sixth overall in the entire AHL. On top of all that, Gadjovich is a constant presence in front of the net, consistently physical, and tougher than a stale Tootsie Roll.
Add in the fact that Gadjovich loses his waiver exemption as of next season, and you can see why most have him penciled in on the Canucks’ fourth line for the start of 2021/22 — if he isn’t snagged by Seattle first, that is. Hey, maybe an extremely successful cameo could even earn him one of those coveted protection slots!
Gadjovich hasn’t been called up as of yet, and he would have to sit through quarantine before hitting the ice in Vancouver, so the front office should ensure he’s actually going to play before they make the decision to recall him. But doing so might be worthwhile, if for nothing more than to give Gadjovich a taste of the job he’ll be performing next season — and a reward for scoring all those goals.

Since being drafted 174th overall in 2015, Jasek has never really been considered a legitimate prospect for the Canucks — but that may have been a case of not enough attention paid. Through three seasons with the Utica Comets, Jasek has slowly but surely developed into a player with genuine upside. In 2021 alone, he headed back to the Czech Extraliga for 12 points in 19 games before returning to the Comets to post another 15 in 18. He’s also proven his versatility, finding success at center and on the right wing.
The Canucks retain Jasek’s RFA rights, so long as they make him a qualifying offer this offseason. Before they do, it might be worth seeing how he adapts to the pace of the NHL game — though it should be noted that he’d need to clear quarantine before joining the Canucks, which could hurt his chances.
Jasek might have to wait until training camp to start making some real progress up the depth chart.

Silovs just turned 20 last month, so it’s perfectly alright that he has yet to play an NHL game. Most didn’t expect him to arrive in the big leagues anytime soon. But after playing 36 games for the Barrie Colts in 2019/20, Silovs has suited up just 9 times in total across four different leagues, and that’s just not enough for a developing goalie.
Getting Silovs into some game action should be a priority, and with Thatcher Demko reportedly suffering from a minor injury and Mike DiPietro already dispatched to Utica, an NHL start may just be in Silovs’ imminent future.
Whether or not he’s actually ready for that remains to be seen.

The aforementioned DiPietro got sent down to Utica just days before he might have finally got to dress for the Canucks, and that’s rotten timing. But there’s little chance the Canucks want him to go through quarantine for a week right after clearing the three-day required to join the Comets, so it’s a good bet that DiPietro stays there for the remainder of the 2021 season.
The same goes for Guillaume Brisebois, still just 23 despite seeming as though he’s been around for a decade. At least Brisebois got in a single game before his demotion.
There’s not nearly as much impetus to get older players like Ashton Sautner, Tyler Graovac, or Madison Bowey into the mix as there is for their younger counterparts, so expect them to wait until an injury opens up a spot for them.
The trio of Jett Woo, William Lockwood, and Carson Focht are each earning rave reviews for their rookie performance in Utica, but that’s where they should stay for the rest of the 2021 season. They’ve still got a lot to learn at that level, and shouldn’t expect an NHL audition until well into 2021/22 at the earliest.
On that front, the Raffertys, Rathbones, and Linds definitely have first dibs.
Uncategorized
Recent articles from Stephan Roget