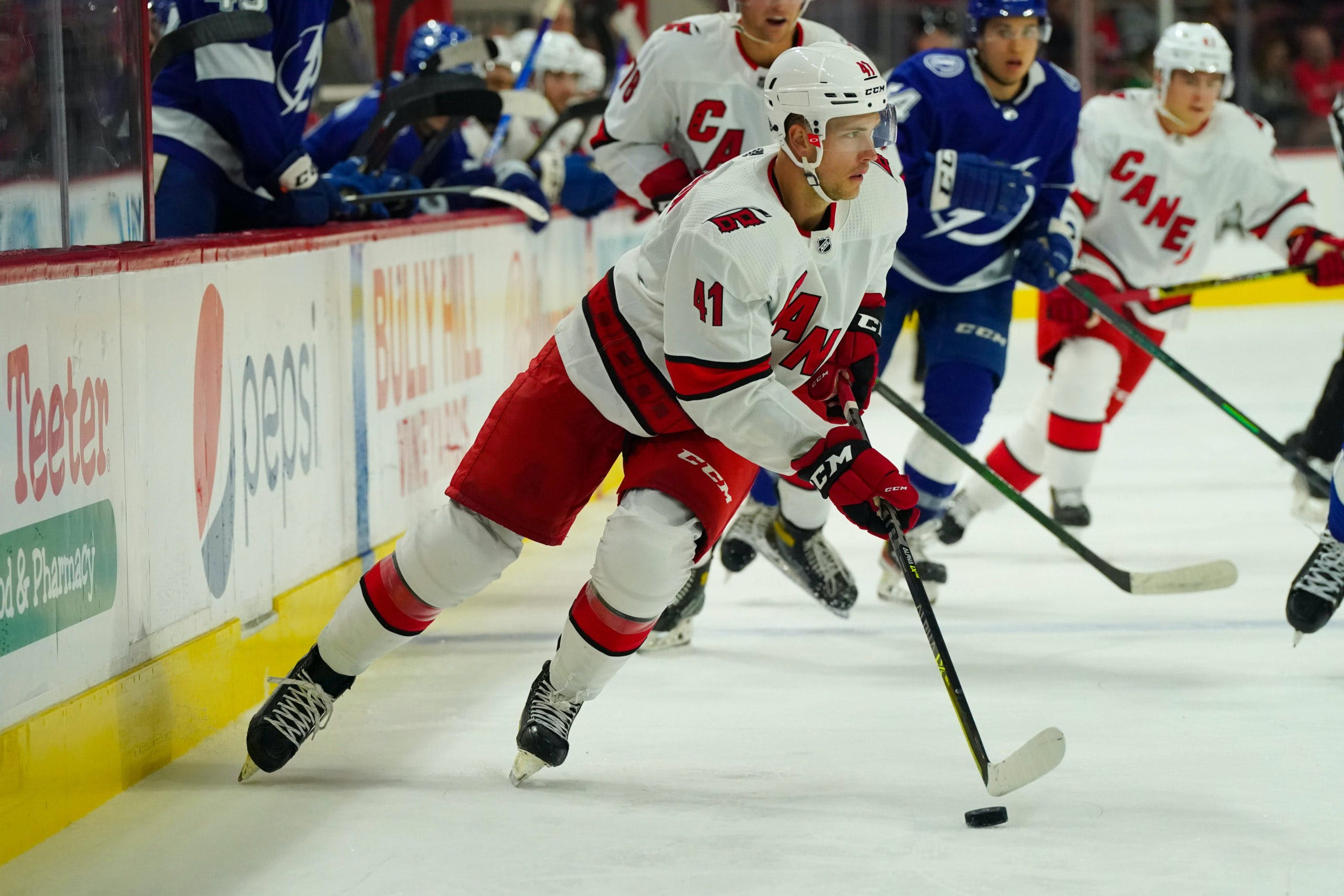 By David Quadrelli
1 month ago
Late Friday afternoon, Vancouver Canucks general manager announced that the club had recalled right-shot centre Lane Pederson from Abbotsford.
The Canucks acquired Pederson, 25, from the Carolina Hurricanes, along with Ethan Bear in exchange for a fifth round pick in late October.
Pederson immediately reported to Abbotsford, and not much was known about him beyond the fact that he’s the longtime boyfriend of Luke Schenn’s sister.
Pederson made himself known quickly, however, and hasn’t taken his foot off the gas since arriving in Abbotsford. Through 18 games on the farm, Pederson has potted 17 goals and added seven assists in the process.
That goal tally is already the second-highest mark of his six-year AHL career. Pederson’s 23 goals in 2018-19 with the Tucson Roadrunners is his career-high, and he’s already only six away from matching that number. It’s also worth mentioning that it took Pederson 67 games to hit that mark, and if he keeps up his current pace, he’ll hit 23 in no time.

What to expect from Pederson at the NHL level

As you may have expected, Pederson is rocking a sky-high shooting percentage of 38.6% so far this season. But there’s more to it than that.
On top of having a top-ten shooting percentage in the AHL since joining Abbotsford, most of Pederson’s success has come on the power play, where he holds down the JT Miller spot on the wall on Abbotsford’s first man advantage unit.
Pederson has seven goals at 5v5 this season, and the Canucks only have a +4 goal differential with him on the ice at 5v5. That suggests that he’s not going to light the world on fire with his defensive play, and that unless the Vancouver Canucks plan on using him on the power play, he may struggle to translate his offensive success over to the next level.
Cody Severtson, who watches and tracks data of every Abbotsford Canucks game, said this about Pederson:
“Personally, based on his stats when he was with Arizona, I think he can be a perfectly serviceable 4th line center, who may be an upgrade on Nils Aman when it comes to offence — but I think Aman is still the better 4LC option. Aman has shown better defensive awareness and two-way engagement in his rookie year at the NHL level than Pederson has at the AHL level this season.
“Pederson has been perfectly fine at the AHL level, taking advantage of his position on PP1 in the Miller spot. But like Jonah Gadjovich’s final season in the AHL with Utica, a boiling-hot shooting percentage is not a good indicator of translatable NHL skill, nor a guarantor of success.”
One has to wonder if Pederson is here to stay in Vancouver. He will need to pass through waivers in order to be sent back down if he plays at least ten games or is up for 30 days, and it’s hard to imagine that his AHL production has gone unnoticed by the rest of the league.
Nils Aman, on the other hand, doesn’t require waivers at all, and could greatly benefit from playing a ton of minutes down in Abbotsford. Aman’s play has been fine, but it’s not hard to imagine that the NHL club would want to get an extended look at Pederson at the next level after such a terrific start in Abbotsford.
The other thing to consider is that Pederson’s call up could be similar to Christian Wolanin’s of a couple weeks ago, where the player is simply called up as a plan B if one of the Canucks’ regulars is considered a game-time decision.
Both Elias Pettersson and Brock Boeser missed Canucks practice on Friday with an illness, but head coach Bruce Boudreau did say that he expects both to be at morning skate Saturday morning and that both should be good to play vs. Winnipeg.
So will Pederson get a look? If he does, for how long? And what does all of this mean for Nils Aman, and even Sheldon Dries, who was 1/3 of the Canucks’ strongest line on Wednesday night in Calgary? We’ll have to wait and see, but if we do see Pederson suit up, don’t expect to see him light the lamp too much.
Editorials
Recent articles from David Quadrelli