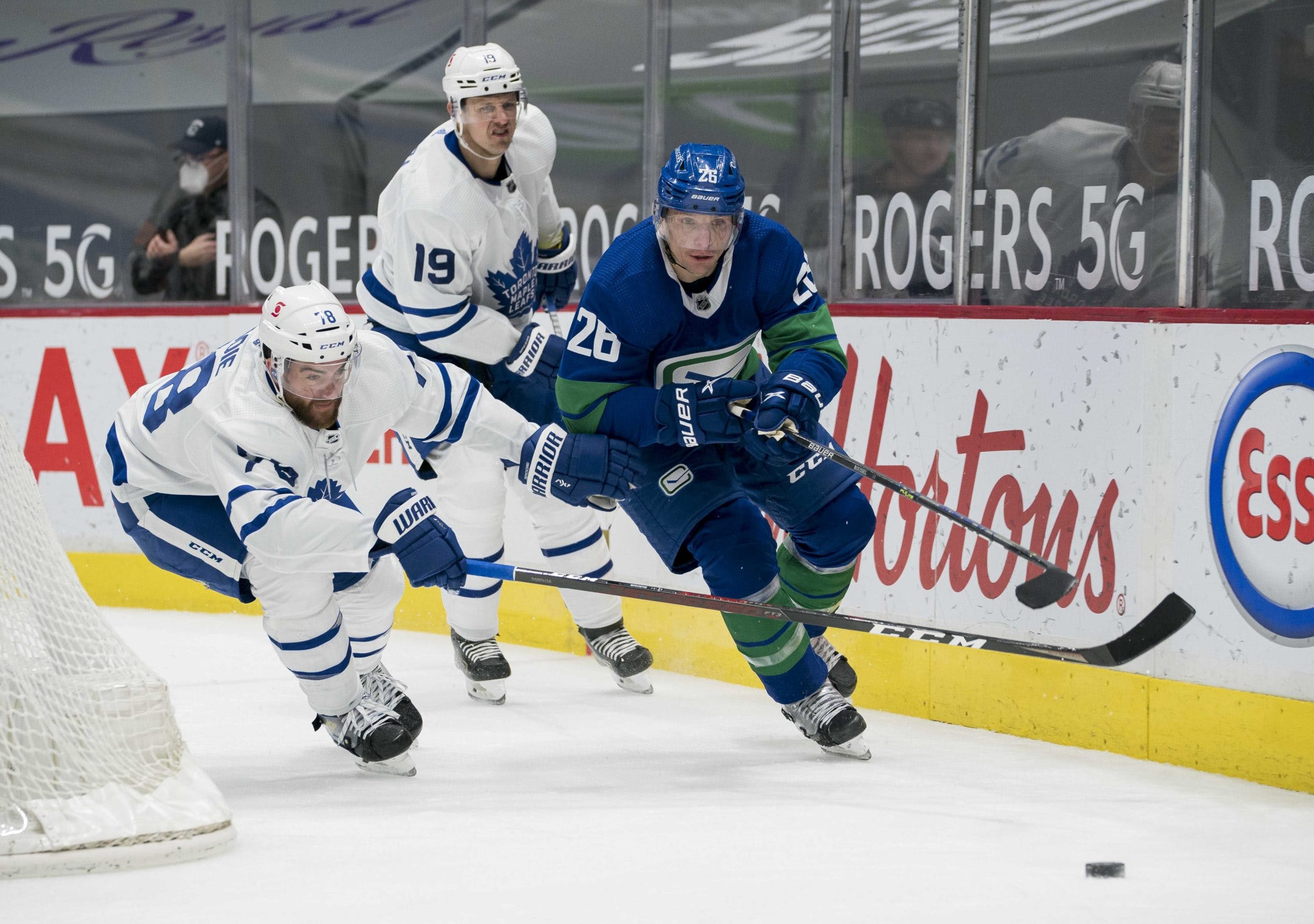 By Faber
1 year ago
When it comes to bounce-back potential, Antoine Roussel is a prime candidate for the 2021-22 season.
He is not likely to be worth the three million dollars that he will be paid next season but his contributions on the penalty kill while being an effective fourth-line player does carry some weight.
On the contrary, his contract situation makes him a prime candidate to be buried in the minors to give some players on entry-level contracts a shot in the Canucks’ bottom-six.
I’m more in the camp of having him play the final year of his contract on the Canucks’ fourth line. The big question is: what version of Roussel will we see in 2021-22?
He has battled injuries over the past five seasons and is not the same player who could contribute in the Canucks’ middle-six back in 2018-19. The injuries have slowed him down and speed is a key to Roussel being an effective player. He needs to be able to forecheck hard on every shift to be effective.
Roussel finished the season out of the lineup with an MCL injury. He told the media that he had lost five or six pounds over the COVID outbreak and believed that his lack of strength might have contributed to him re-injuring his MCL in his second game back from the extended COVID break.
This past season saw Roussel be a contributor on the penalty kill after he did not get any shorthanded time during his 41 games in the 2019-20 season. Getting back to the PK was something Roussel wanted to do.
“You always want to have an extra role on the team,” Roussel told CanucksArmy. “Guys were better than I was for a stretch and then I lost my spot there.”
A full offseason of healing and building strength will be key for Roussel. He won’t get back to the speedy winger that he was in his 20’s and now at the age of 31, his body has taken some damage but is not yet broken. There’s room for him to come into the Canucks’ lineup and be an effective fourth-line player who eats up some minutes as the winger on the second penalty kill unit while Vasily Podkolzin works his way into the mix.
There is a situation where Roussel ends up playing alongside Podkolzin on a third line if he is able to win the job out of camp. Roussel’s biggest offensive strength is his passing ability and he has done a pretty damn good job of maintaining a positive goal differential in his time with the Canucks.
Through his first three seasons with the Canucks, he has held a positive control of the goal share in each season and has had more primary assists than secondary assists at five-on-five in each season, including 16 of his 20 assists being that of the primary variety back in 2018-19.

In the end, it’s all going to come down to his health next season. This past year, his health kept him out of the lineup for most of the second half of the season. His weakened knee could be a nagging injury that limits his ability to play consistent games throughout the season. I like the idea of him being a fourth-line player who potentially gets rotated up to the third line or out of the lineup for an energy player like Zack MacEwen or Jayce Hawryluk.
There’s nothing anyone can do about the fact that he is making three million dollars this season. His cap hit is tough to swallow and if buried in the AHL, he would provide $1,075,000 of cap space and that could be filled with a player like Will Lockwood for $232,500 in added cap space or a player like Matthew Highmore, who would provide an extra $375,000 of cap space if he is on the roster instead of Roussel.
I have time for both arguments but neither Lockwood nor Highmore has played PK minutes and NHL experience seems to be very important for who Travis Green plays on his shorthanded groups.
Roussel will need to prove himself at camp. He’s an excellent help around the rink and from my observations at practices and training camps, Roussel is massive help before and after practices for the shooters and goaltenders.
He’s excellent in the community and so much fun to deal with in the media. It’s a contract year for him and I’m sure he is working hard this offseason so that he can extend his NHL career after this season.
Roussel is annoying to play against and with the added PK worth, he has value on a fourth-line. We will have to wait and see how he looks at camp. He might be on the outside looking in but has the veteran bump that jumps him over others in the mind of Travis Green.
Maintenant, c’est juste un jeu d’attente avec Antoine Roussel.
Uncategorized
Recent articles from Faber