Call it a healthy scratch or ‘load management,’ the Canucks need to start sitting veterans 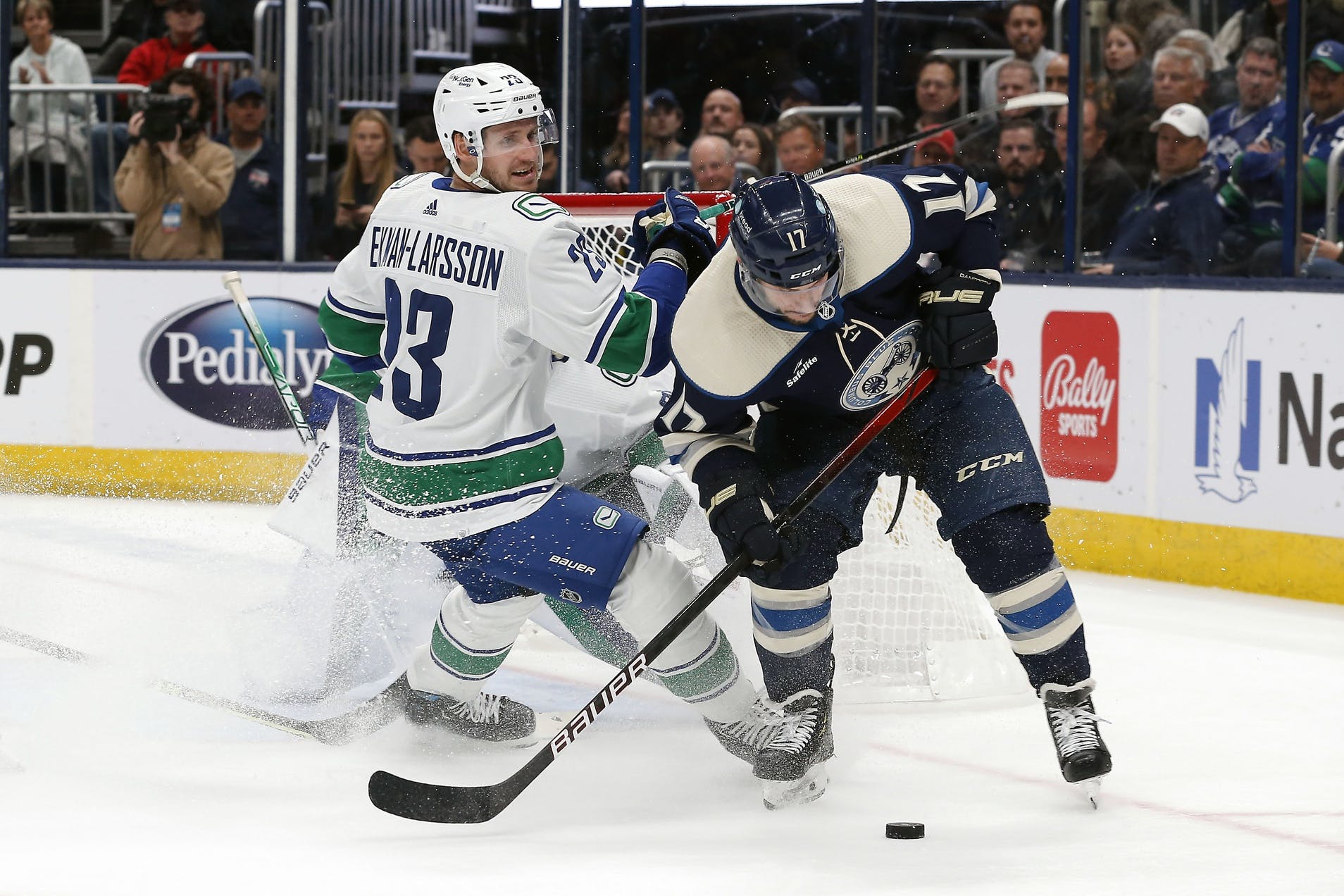 By Stephan Roget
1 month ago
Welcome to our editorial content, brought to you by NHL odds site Betway!
Things are tough all over for the Vancouver Canucks, but at least they’re finally getting healthy again.
Of course, this being the Canucks that we’re talking about, even getting healthy comes with its own set of issues.
On Tuesday night, both Riley Stillman and Quinn Hughes returned from injury. At the same time, Ethan Bear made his Vancouver debut. As a result, both Jack Rathbone and Kyle Burroughs came out of the lineup, and Guillaume Brisebois was both scratched and demoted to the AHL in one fell swoop.
Given Rathbone’s recent strong showings, and Burroughs’ trademark work ethic, that those two wound up in the press box proved decidedly controversial.
Scratching Rathbone in particular was cause for some serious consternation. The Canucks have exactly one NHL-ready prospect in their entire organization, and it’s Rathbone. He already spent the first five games of the season watching from above, and to see him on the outside looking in is frustrating to many. It is, at the very least, not an effective way to develop a young player — not to mention the fact that, to many observers, Rathbone seems to have earned his spot in the lineup.
It’s certainly not an ideal situation.
And it seems like a problem that is only going to become more prominent.
Later this week, Brock Boeser is set to return to the lineup. That will necessitate the scratching of another forward, and at this point the two most likely candidates are Nils Höglander and Vasily Podkolzin, the team’s youngest players.
For a team that’s currently shaping up to finish in the bottom tier of the NHL standings, that’s just not what one wants to see. Especially not when there’s a far better solution staring the Canucks in the face.
It’s long past time for the Canucks to start scratching some veterans, both on the merits of their play and for the purpose of giving their youth opportunity to grow.
In saying this, we realize that it’s fairly unlikely for this to happen. Bruce Boudreau is a player’s coach, and that’s why people love him. When it comes to deciding between an unproven youngster and a known-quantity veteran, Boudreau is always going to default to the vet.
That’s why it might be useful for the Canucks to put a positive spin on veteran scratches by borrowing a term from the NBA: load management.
Think of it this way: several Vancouver veterans are clearly not playing up to snuff in the 2022/23 season. In order to get them back to where they need to be, it’s reasonable to consider some time off as a potential solution. It’s as much about bodily maintenance as it is about mindset. There’s something to be said about “resetting” one’s perspective by watching a game or two from the upper deck.
It also sends an important message that ice time is earned, not given.

The candidates should be fairly obvious. First and foremost on the list is Oliver Ekman-Larsson, who might just be the worst-performing member of the Canucks’ blueline through ten games. He’s certainly been outplayed by the likes of Rathbone and Burroughs.
We’re not advocating for taking OEL out of the lineup permanently; the economic reality of his exorbitant contract makes that incredibly unlikely. We’re just saying that it currently makes a lot more sense to have him sit out for a game or two than it does Rathbone.
If everyone can see that Ekman-Larsson is struggling, and yet he continues to play ahead of others solely based on his salary and experience, what does that say to the rest of the team?
Next on the list is probably Tanner Pearson, who has picked up a nasty habit of taking ill-timed minor penalties of late. Had one of Podkolzin or Höglander put the team shorthanded anywhere near as often, they’d already be in the press box. What’s wrong with giving Pearson the same treatment, especially when his overall play on the ice also warrants it?
The fact of the matter is that future considerations should be as high a priority, if not higher, for the Canucks than the present day. Already, the playoffs are a long shot. The team is somehow off to an even worse start in 2022/23 than 2021/22, and team culture has a lot to do with that.
Scratching the worst-performing players, regardless of salary or tenure, sends a clear message of accountability.
Defaulting to scratching the team’s youngest players, time and time again, sends the opposite message.
Never mind the actual, tangible benefits of time off. Load management is a real thing, and it’s worked wonders for some of the NBA’s most prominent veterans. Older players do seem to get something out of missing the odd game, allowing them to keep their bodies in prime condition and keep a fresh perspective on the game.
Young players, conversely, generally need to play to develop.
Sitting down someone like OEL, in this 13th NHL season, and telling him that he’s being scratched for the first time in his career won’t be easy — especially not for someone like Boudreau. But that doesn’t mean that it shouldn’t happen.
The Canucks have spent long enough deferring to experience, and look where it has got them. If the team is to experience real growth and change, it’s going to be the youth leading the charge. Players like Ekman-Larsson, Pearson, and even JT Miller aren’t going to get any better from here on out. If the Canucks are to get better, it’s going to require the further development of their young talent.
And that young talent isn’t going to develop from the press box.
Editorials
Recent articles from Stephan Roget