Buyout Watch 2023: Which contracts should the Canucks relieve themselves of this summer, if not OEL’s? 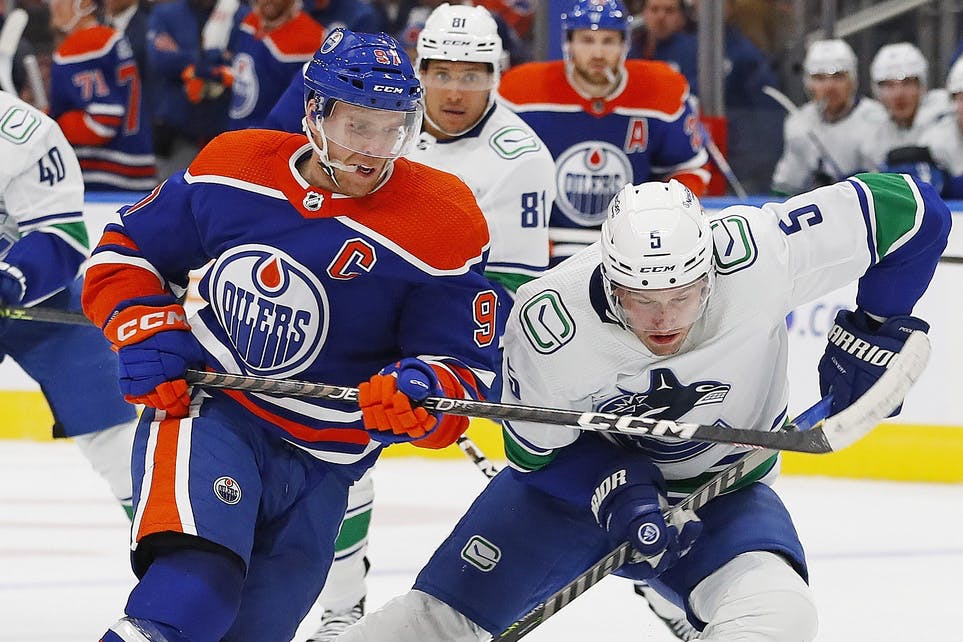 By Stephan Roget
24 days ago
Buyouts.
They’re long, drawn out, painful, and always a sign of regrettable decisions made in the recent past.
In other words, they’re perfectly emblematic of the Vancouver Canucks and the 2022/23 season.
News broke earlier this week that, should they prove unsuccessful at moving out some of their least desirable contracts, the Canucks would consider making multiple buyouts during this upcoming offseason.
Rick Dhaliwal specifically noted that, while his might be the first name to jump to mind on this topic, Oliver Ekman-Larsson is not currently being considered as a buyout candidate.
But if not OEL, then who?
Via our friends over at PuckPedia, today we take a look at seven other 2023 buyout candidates to determine whether any of them would truly be worth the trouble.

If there’s a single best buyout candidate to be found, it’s not on the Canucks’ active roster. It’s on LTIR, where Poolman remains and has spent the majority of the 2022/23 season. At this point, it’s debateable whether or not Poolman should really be considered a full-time NHL defender, and it seems highly likely that his ongoing injury concerns will prevent him from ever returning to form.
Either way, few are expecting him to ever live up to the $2.5 million AAV on the final two years of his contract. Buying him out this summer saves $2 million on the cap for each of those two seasons, and then costs an extra $1 million for the two seasons thereafter, starting in 2025 after the cap ceiling should have gone up considerably.
If the team believes that Poolman will stay on LTIR for here on out, that’s still probably the preferable option, all things considered. If they think he’ll make at least another attempt at a comeback, buying him out is the safest bet.

As the Canucks’ oldest forward currently under contract for next season and with the team looking to get younger, Pearson makes some sense as the odd man out. That’s especially true if one believes, as many do, that Pearson has recently lost an important step.
There is some relief to be found from a Pearson buyout; $1.833 million of it next year, to be exact. That would be followed by a one year cap penalty of just $917K. But Pearson has a $1.5 million signing bonus somewhere in the mix, and that makes his buyout conditions less than optimal.
Were the Canucks to simply trade Pearson at a full 50% retention, it would result in a $1.625 million cap hit for the 2023/24 season only, and there’s a good chance they would even garner somewhat of a return in that scenario. That’s the wiser move to make when it comes to Pearson, so long as a buyer can be found.

Seeing how often Stillman makes it into the lineup despite being the Canucks’ statistically-worst defender, it’s fair to assume that the team has yet to admit that it made a mistake in acquiring him. That casts some serious doubt on the notion that they’ll then turn around and buy him out a few months from now — but a lot can change before June.
If they do decide to buyout Stillman, they can do so almost consequence-free. Because he’d still be under the age of 26, Stillman only has a 33% buyout modifier, meaning buyout penalties of just $225K for the next two seasons. That’s a savings of $1.25 million in 2023/24 and less than a quarter million on the books the season after.
It’s worth noting, however, that the exact same cap savings could be yielded in 2023/24 by just burying Stillman in the minors, and then they wouldn’t have to worry about a 2024/25 penalty at all. That seems a far more likely outcome.

After another string of disastrous performances, the subject of getting rid of Myers sooner rather than later has been raised once again. If that’s going to happen, however, it’s going to have to happen via a trade, because Myers’ contract is effectively buyout-proof.
Because of that $5 million signing bonus still to be paid, if the Canucks were to buy out Myers’ contract this summer, they would still be hit with a $5.33 million hit for the 2023/24 season. That’s a savings of just $667K, followed up by a $333K penalty the following year. There’s just no scenario in which that’s worthwhile, especially when burying Myers in the minors would literally result in more cap space and no penalty.
Even trading Myers with a full 50% retention leaves the Canucks with far more cap flexibility than a buyout. This one ain’t happening.

Now, we get into the less-obvious candidates. Though many already find Boeser’s three-year extension — which just kicked in this season — to be a regrettable one, the assumption still is that Boeser holds at least some trade value. He is an established top-six player with plenty of prime years left, and the talent is undeniable.
Should the Canucks be unable to trade Boeser and still want to create some cap space, a buyout is an option, though not a terrific one. Boeser will be 26 this summer, just missing the cut-off for a 33% buyout. The subsequent breakdown yields major cap cushions of more than $4 million for each of the next two seasons, followed by $2.2 million penalties for two seasons thereafter.
That’s a lot of immediate flexibility, and those penalties won’t come until the cap ceiling is much higher. This might not be a perfect solution to the team’s cap woes, but it is a solution.

Speaking of regrettable extensions, Garland is in the second year of  a five-year deal and is really starting to look like he might not be worth his $4.95 million AAV. His scoring pace has dropped, and so has his compete level, and he just doesn’t look like the same player that he did in his first season with the Canucks.
But buying out four years of a contract is a big commitment. The Canucks would get more than $4 million in extra space for the next two seasons, more than $3 million in 2025/26, and then three straight years of a $1.8 million+ penalty thereafter.
That’s a long time to be penalized for, even with the cap ceiling virtually guaranteed to have risen considerably by then. Still, the space gained is far more than would be gleaned from trading Garland at a full 50% retention ($2.475 million), so it’s at least food for thought. If the team decides that Garland is the one to go, deciding between a trade and a buyout will be dependent on the potential return.

Really speaking of regrettable extensions, we land on JT Miller. Let’s start with the obvious: there’s no real chance that the Canucks will buy out a seven-year contract before it has even begun. That’s just not going to happen, especially not a contract that is so laden with signing bonuses. This option never even hits the table, and for some reason PuckPedia won’t even spit out the numbers for us, which really says it all.

For the sake of completion, we’ll mention OEL’s buyout details here.
Buying out Ekman-Larsson’s contract is a complicated endeavour, resulting in cap relief and penalties for both the Canucks and the Arizona Coyotes, who still retain a portion of the remaining five years on his deal.
From the Canucks’ perspective, however, there’s plenty of appeal. Buying out Ekman-Larsson yields a convenient $7.11 million in space for the 2023/24 season, which drops to $4.91 million the year after and then $2.49 million for the next two. Then, the Canucks get hit with four straight seasons of a $2.13 million penalty, still significant even with a higher cap.
Is that worth it? That’s hard to say at this juncture, but in looking at the list above, we’d still say that buying out Ekman-Larsson makes more sense than buying out anyone else, save Poolman.
Editorials
Recent articles from Stephan Roget