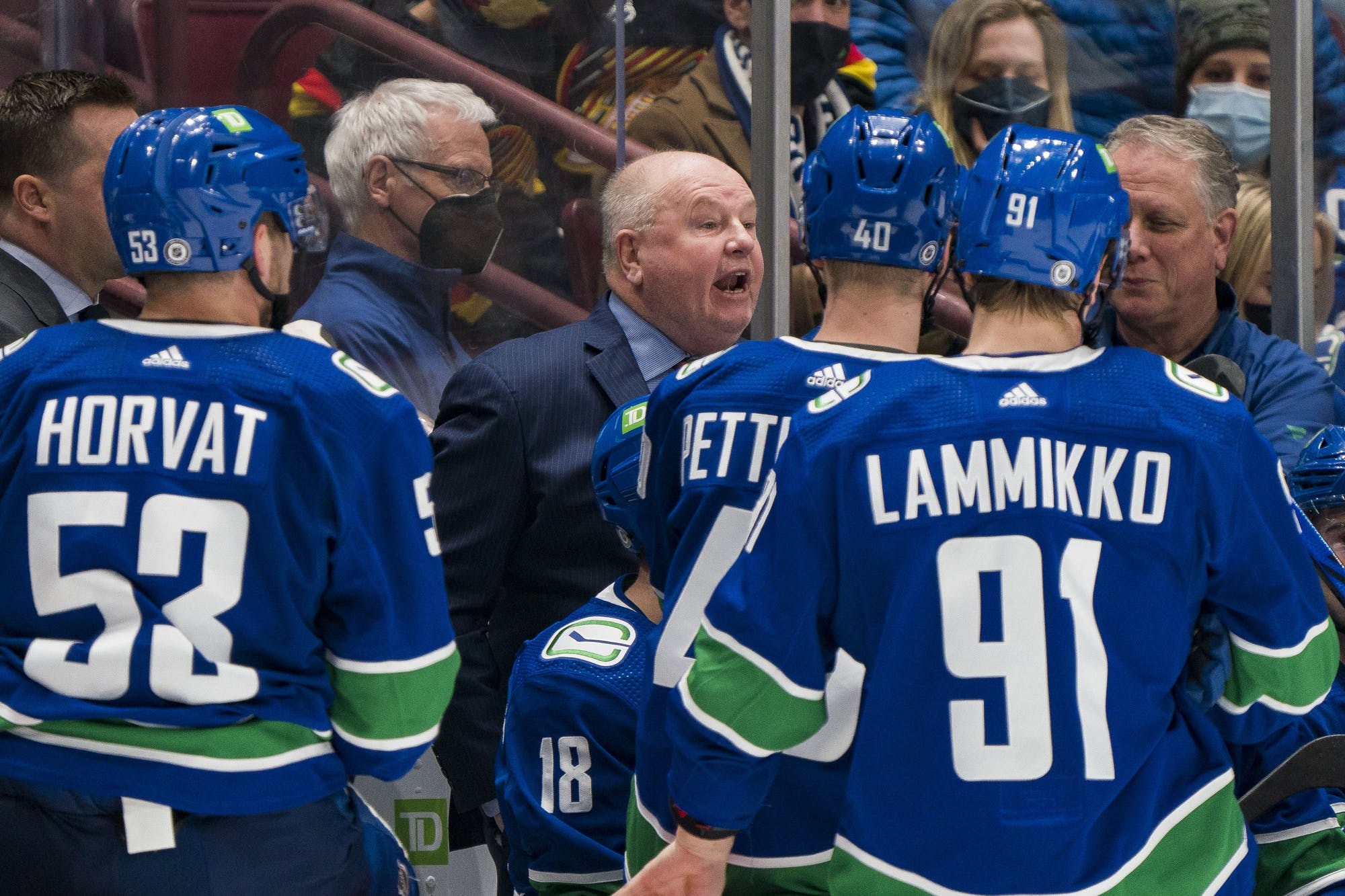 By Lachlan Irvine
2 months ago
With the Canucks’ season opener less than a month away, Bruce Boudreau won’t be wasting any time putting together the team he wants when training camp opens in Whistler this morning.
After coming to Vancouver midway through last season, the head coach is getting his first opportunity to build a full game plan from Day 1. And in talking with the media yesterday, Boudreau laid out his clear-cut plans for how the Canucks’ coaching staff will be approaching the forward line rushes at the beginning of camp today.
“In tomorrow’s practice we’ll have at least four lines that we’re hoping look like opening night,” Boudreau said. “But the next day they may all be changed, so who knows.”
Several new forwards joined the Canucks during the offseason, including Andrey Kuzmenko, Ilya Mikheyev and Curtis Lazar, leaving plenty of room for speculation on where each forward fits in under Boudreau’s system. But some choices are much easier than others; having Elias Pettersson, Bo Horvat, and J.T. Miller centre the top three lines is pretty well set in stone, but the wingers they’ll get are still a mystery.
When asked how many different line combinations he’s had in mind, the coach had a somewhat tongue-in-cheek response.
“How high a number can you think?”
But the name of the game for Boudreau this season seems to revolve around using players on off wings or in non-traditional spots if it sparks team chemistry.
“The only thing I really know is that we want to start with Bo, Petey, and J.T. up the middle. Everybody else, we’ve had lineups where they’re playing the left side and the right side,” Boudreau said about the team’s forward depth. “I talk to all of them about how they like playing, or if I plan on moving them to a different spot.”
That type of adaptability could prove to be extremely useful in the event of injuries and call-ups over the year. And during a gruelling 82-game season, those situations are all but a guarantee.
“Hockey is one of those things where line changes happen on a daily basis almost,” Boudreau said. “One injury could mean three different line changes.”
But that doesn’t mean Boudreau is planning to shuffle the lineup cards every single day. The units he’s chosen to open camp with are going to be close to the ones used when the Canucks open the preseason with a pair of split-squad games against the Calgary Flames on Sunday.
“The tough one will be Sunday because we’ve got to put two teams together and X amount of veterans in each game,” Boudreau said. “But in the preseason at least for the first couple games, the lines that we have out there we’re going to try to keep together as a unit. Rather than saying, ‘Okay, J.T., you’re playing, but Boeser is not playing so we’ll put another guy up’. I’m trying to keep the lines together to keep some familiarity with them.”
The planning Boudreau has done goes beyond just the NHL club. The head coach watched the Young Stars Classic in Penticton from the sidelines but could see the chemistry building between potential teammates for the AHL affiliate in Abbotsford.
“For example, in Penticton, there was a line of Wouters, Klimovich, and Nielsen, and they played well together. So why wouldn’t I keep them together here? So we’re going to do that.”
Boudreau didn’t give away too many details on Monday about the NHL lines he’ll be starting with, but a few different tidbits could be gleaned from where the puzzle pieces are fitting. Besides mentioning a scenario where Miller and Brock Boeser are paired on a line together, he also brought up the likelihood of seeing Conor Garland on left wing.
“I saw him play the last 10 games on the left side last year, and I thought he did a really good job. Then things started to open up for him,” Boudreau said about Garland. “So if he’s okay with it, let’s try him on the left side, and let’s see if maybe somebody else can play the right side on that line. So that’s an experiment that we’re going to try right off the bat.”
But even though experimentation will be something to watch for over the next few days in Whistler, Boudreau’s had the time with the majority of the Canucks’ roster to see what works and what doesn’t. So don’t be surprised if the same lines fans will see today in Whistler remain nearly unchanged by the time the puck drops in Edmonton on October 12th.
Content
Recent articles from Lachlan Irvine