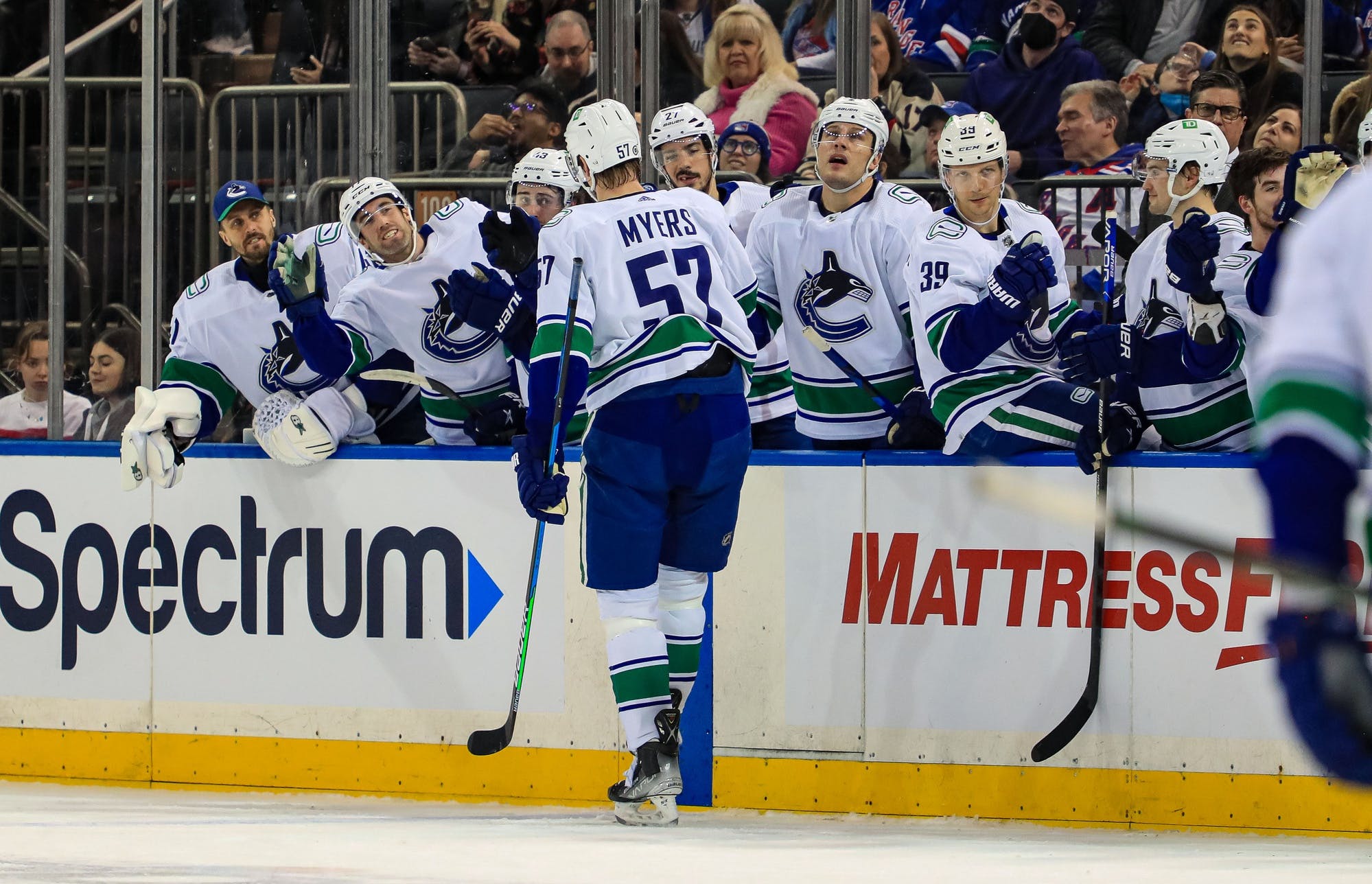 By Stephan Roget
9 months ago
Three weeks to go until NHL Trade Deadline 2022.
We’ve spilled plenty of digital ink already positing potential deals between the Vancouver Canucks and various trade partners, but we’ve yet to really look at the BIG picture.
You see, when it comes to hockey trades, it takes more than two to tango, and every transaction, really, involves more like 32 teams — your own team, the team you’re trading with, and the 30 other teams you don’t trade with.
As the Canucks explore the trade market for their myriad tradeable assets, they’ll have to measure the intentions of the other franchises carefully. Not only will the Canucks need to worry about how many different teams are interested in buying their pieces, they’ll also have to worry about all the other teams that might be selling similar pieces of their own.
The more buyers on the market, the higher the returns should be.
The more sellers on the market, the lower.
That’s just basic economics, and with that in mind, we’ve broken down the basic shape of the market heading into the 2022 Trade Deadline.

Who are the Canucks offering?: JT Miller, Brock Boeser, Conor Garland
This is the big-ticket right here, where the Canucks have the most to sell, and the other teams have — theoretically — the most to give back in return. The Canucks won’t deal all three of these players, but they’ll almost certainly deal at least one of them, and maybe two.
Who’s buying?: Boston Bruins, Colorado Avalanche, Edmonton Oilers, Los Angeles Kings, Minnesota Wild, Nashville Predators, New York Rangers, Pittsburgh Penguins, Toronto Maple Leafs, Washington Capitals
Every playoff-bound team would probably like to add a top-six scorer if they could, but only so many have the roster and cap space to do so. Still, the list is a lot longer than one might expect, and that’s got to be encouraging for the Canucks.
Who’s also selling?: Anaheim Ducks (Ryan Getzlaf), Arizona Coyotes (Phil Kessel), Colombus Blue Jackets (Patrik Laine), Dallas Stars (Joe Pavelski), Detroit Red Wings (Tyler Bertuzzi), Montreal Canadiens (Jonathan Drouin), Nashville Predators (Filip Forsberg), Philadelphia Flyers (Claude Giroux), San Jose Sharks (Tomas Hertl), Winnipeg Jets (Andrew Copp)
There are also, unfortunately, more top-six forwards on the market than there usually are this time of year. None of them are of the same quality as a Miller, and only a handful are in the same territory as Boeser and Garland, but the options will provide at least some leverage to the teams negotiating with the Canucks.

Who are the Canucks offering?: Jaroslav Halak, Spencer Martin (maybe)
Even with that $1.25 million bonus achieved, the Canucks will still try to move Halak for whatever return is possible. If that fails, or if Halak invokes his NMC, then the Canucks might explore the market for Martin, but they’d probably rather not.
Who’s buying?: Colorado Avalanche, Edmonton Oilers, Los Angeles Kings, Nashville Predators, New York Rangers, Pittsburgh Penguins, Toronto Maple Leafs, Vegas Golden Knight
There are plenty of contending teams looking for a solid backup, an upgraded backup, or — in the case of the Oilers — a starter.
Who’s also selling?: Chicago Blackhawks (Marc-Andre Fleury), Columbus Blue Jackets (Joonas Korpisalo), Dallas Stars (Braden Holtby, Anton Khudobin), Montreal Canadiens (Jake Allen), Philadelphia Flyers (Martin Jones), San Jose Sharks (James Reimer),
The Canucks should have this market cornered. Aside from Fleury, who will be expensive to acquire, Halak looks like the best backup available. Of course, there’s still that pesky NMC in the way…