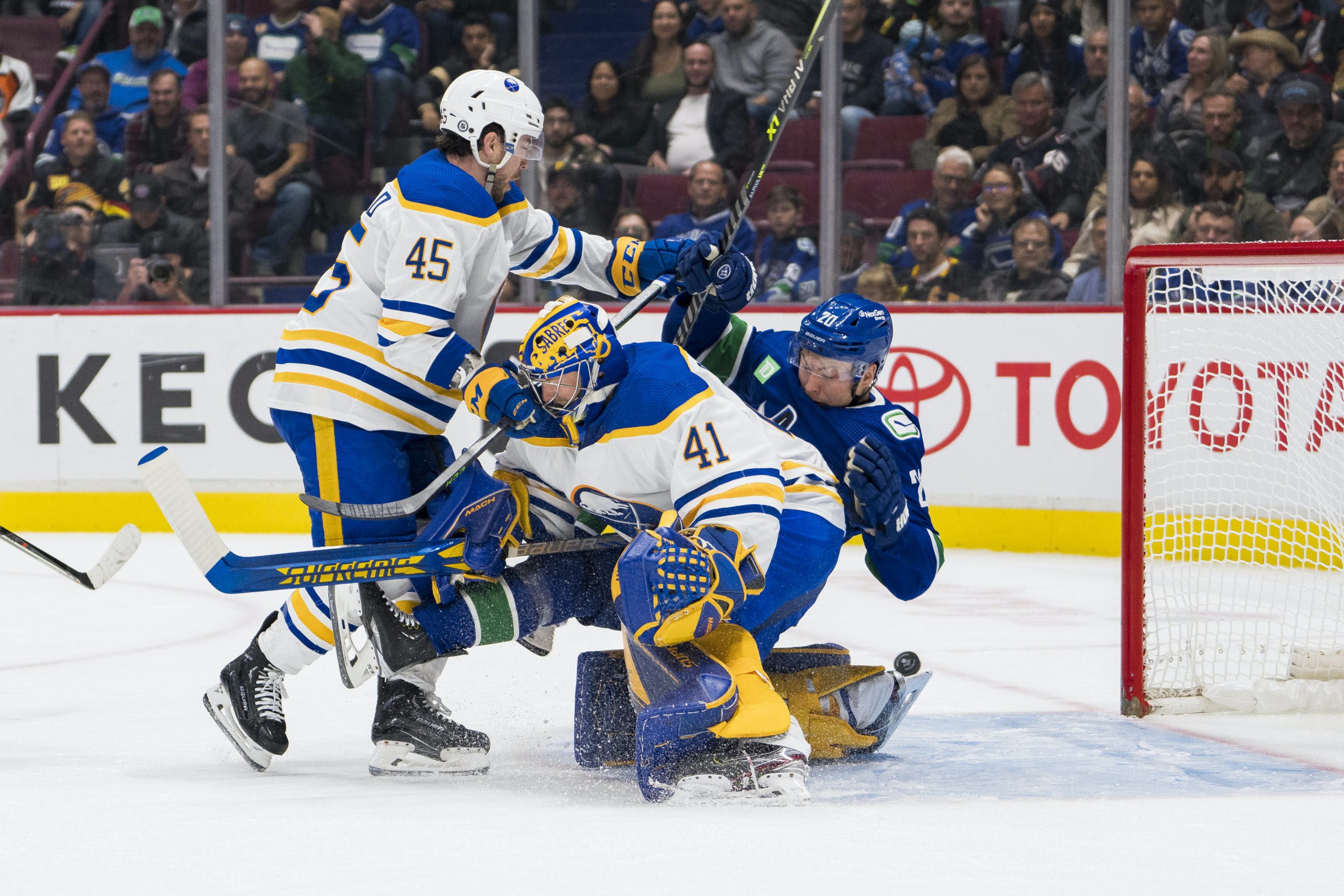 By Isabella Urbani
3 months ago
The Vancouver Canucks are seven games into the NHL season and are getting worse results than last year. However, this time around, the Canucks’ impassioned play that ended Travis Green’s tenure has plagued the team’s first start of the season under head coach Bruce Boudreau.
This time last year, the Canucks had a 3-3-1 record through their first seven games. This season, the Canucks have yet to win a single game. On the plus side, they aren’t completely pointless! They managed to strangle two points in overtime losses against Columbus and Minnesota, ignoring the fact that they had the lead in both games heading into the third period. But hey, I suppose both of the slogans the Canucks have used this season make sense now.
“Unfinished Business”: Being unable to close out a game with a lead; and “Our Pursuit”: The ongoing hunt to win game number one.
The start to this season alone is beyond frustrating, but considering the Canucks’ gamble to sign 99-point producer JT Miller to a hefty seven-year deal, it feels like the team is stuck in yet another perpetual loop of ‘where do we go from here?’
On paper, this Canucks lineup is an upgrade from last year just with its new additions. You possess an actual scoring threat on the penalty kill in Ilya Mikheyev; a heavy shot with developed KHL player Andrei Kuzmenko, who of all teams in the sweepstakes, decided on Vancouver; sandpaper in Dakota Joshua; and a hard-nosed, get-in-your face type player in Curtis Lazar.
All excellent additions in some aspect of President Jim Rutherford’s mission to make the team younger, faster, and more physical. Well, that’s translated onto the ice in some regards, especially with the budding chemistry between Pettersson and Kuzmenko, but regardless, the team is still heavily underperforming.
Using the “difficulty” of matchups isn’t a valid excuse to explain this season’s results, either. Both this year’s and last year’s teams faced off against the Oilers, Flyers, Wild, and Sabres in their first seven games, with two very different outcomes. While Boudreau’s current squad went pointless against all three teams, Green’s team at least picked up a point against the Oilers and beat the Flyers. The Sabres and Wild? They too eerily lost against them in a similar fashion: 5-2, and 3-2 respectfully. Sure, they’re slightly different teams than they were last year, but you get the point.
Why bring up Green and Boudreau?
While the consensus last year was to clean house, fans can expect that the same will not happen just one season later. Now, the problem becomes damage control — which the Canucks hoped to avoid with Boudreau leading the team from the jump. Aside from Miller and Horvat contract negotiations, Boudreau’s first training camp with the Canucks was the main talking point heading into this season’s preparations. If he could turn the Canucks from a morale-stricken club to a borderline playoff contender in sub-60 games, imagine what he could do in 82? Not many people, if any, expected this bad of a start.
While it’s still early in the year, no other team is winless, even Arizona. Second, unless you’re the 2019 St. Louis Blues, it’s next to impossible to start the season so poorly and expect to make up ground on winning teams along the way. Needless to say, you want to have to control your own destiny, not count on slip ups from other division teams. Just to highlight how poorly the Canucks are doing right now, even under Green last season, the Canucks never had a seven-game losing streak at any point.
Another ongoing theme that transferred from last year to this year is terrible inconsistencies in performance and lineup. The team’s top players are not clicking at the same time: it’s a constant two-way battle of extremes. While Pettersson was under a dry spell for the first chunk of last year’s season, Miller was willing the team forward. While Pettersson is back to form and averaging a point per game, Miller was on the ice for the first eight goals against the Canucks this season.
Another noticeable drop-off this season has been goaltending. I would say defence, but that’s no surprise from last year. Despite not making the playoffs, the Canucks were the eighth-best team in goals against, much to the Vezina-voted play of Thatcher Demko.
While letting Jacob Markstrom walk was certainly the most beneficial move for Demko’s development, the team suffered backup blunders two years in a row with Braden Holtby and Jaroslav Halak. Rutherford and Co. are hoping that Spencer Martin can serve as a reliable backup goalie that can lighten Demko’s workload once and for all this season. Although the five-game road schedule to begin the year didn’t yield the easiest split for this year’s goalie tandem, Martin should have played more.
This isn’t to say that Demko has been responsible for the Canucks’ losses. Because frankly, this team is capable of scoring at least three goals a game, and they are not. But even Demko would admit that he likely hasn’t been on his A-game to begin the new season.
It’s no secret that the Canucks rely heavily on Demko in order to pick up wins, so him not being at his best leading to these results really doesn’t come as much of a surprise.

This season, the Canucks have turned into the nighttime special of the Toronto Maple Leafs by blowing multi-goal leads, whereas last season, a lead didn’t come easy for the Canucks.
The general pattern in Vancouver’s first seven games was if they didn’t score first, they wouldn’t win. They only came back once against Seattle, and even if they did score first, it didn’t guarantee they would win that game. In general, the Canucks were chasing their opponents and managed to pick up points by scoring equalizers late into the final frame to keep the game going. While both this year’s and last year’s teams have managed to go past regulation in two of their first seven matches, this year’s squad has done so by surrendering leads late.
So, what do these maddening losses come down to? If only I knew Faber’s DAWG formula. But let’s draw our attention to a couple of stats that demonstrate where the Canucks are taking significant steps back.
Last year goals for through seven games: 20
This year goals for through seven games: 18
This year’s team, no question, should be toppling last year’s team in goals.
Last year’s goals against through seven games: 21
This year: 30
More goals are going in with fewer goals to show for, which is just a recipe for disaster.
Third period goals for through seven games last year: 7
Third period goals for through seven games this year: 2
Now we’re getting to the real culprit.
Third period goals against through seven last year: 8
Third period goals against through seven this year: 15
Goal differential in third periods through seven games last year: -1
This year: -13
While the Canucks have far more first-period goals this season, these markers don’t hold much weight unless they can actually make those goals stand.
Penalty kill percentage through seven games last year: 76%
This year’s PK percentage: 57% (worst in the league)
The Canucks’ penalty kill was hovering around the late 60s at its worst last season. Far too many tying and go-ahead goals this season have come on opponent power plays.
Last year’s power play through seven: 23%
This year’s PP through seven: 16%
With additional scoring threats on the first power play like Kuzmenko, the Canucks’ power play should be competing for one of the best in the league, not among the bottom.
Here we are at square one: crunching the numbers, altering the lines, and throwing jerseys out on the ice. What makes this year’s failures even more magnified, all things aside, is last year’s reluctance and lack of urgency to turn things around. By the time Boudreau had the reigns, it was going to take the team more than a Hail Mary and great stretches of play to claw into the playoffs.
The Canucks are heading in that exact same trajectory, and right now, it’s way worse, expectations excluded. If the answer isn’t changing management, will it be in liquidating players?
At what point does management say, ‘we’ve got to go back to the drawing board’?
Things need to change. It’s the obvious answer. But seven games in, if that’s the question being posed, your season is already hanging in the balance and you may already be running out of time.
Editorials
Recent articles from Isabella Urbani