As the Bo Horvat situation develops, the Canucks need to keep an eye on similar negotiations in Detroit and St. Louis 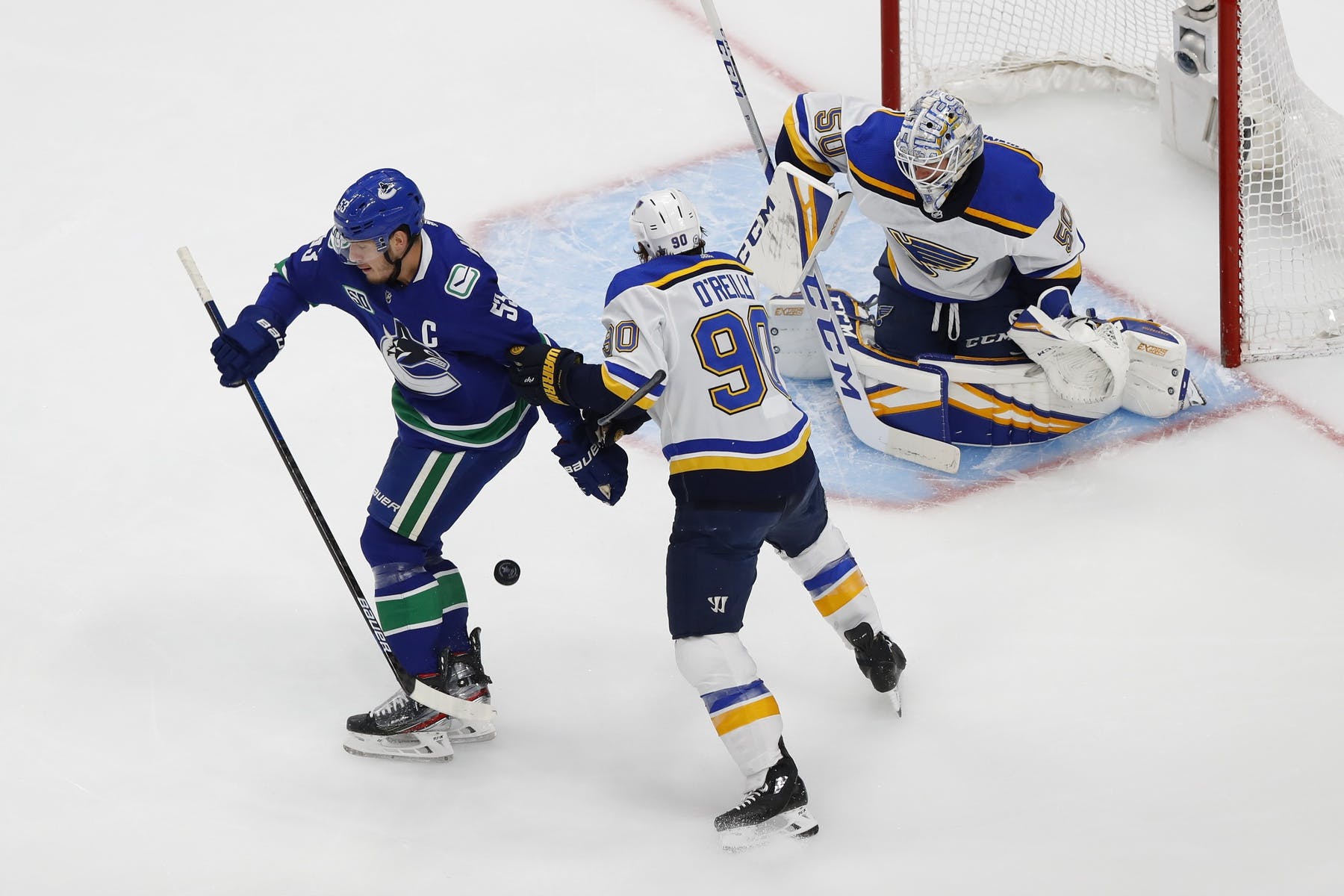 By Stephan Roget
1 month ago
Riddle us this, loyal readers:
‘Team X’ has a captain who is a pending UFA at the end of the 2022/23 season. Said captain is a centre with high-end offensive skills, a strong two-way reputation, leadership abilities, and renowned character. Unfortunately, said captain remains unsigned, and is now most likely to find a new home in the near future, either via trade or free agency.
Now, who is ‘Team X?’
Is it:
The answer — as with any good riddle — is a bit of a trick question, because it’s actually all of the above.
Vancouver’s current situation with Bo Horvat is well-known to anyone regularly visiting this site. But call it the ultimate case of Canuck Luck that even in a scenario in which they’ve put their all-star centre captain to market, he’s not even the only all-star centre captain available.
The presence of Dylan Larkin and Ryan O’Reilly on the same market could very well complicate matters for the Canucks.
Larkin is the clearest comparable of the two. Like Horvat, Larkin is in the midst of the best offensive season of his career, sitting on 31 points in 31 games as of this writing. Like Horvat, Larkin has served as captain from a young age, and through some tough times. Like Horvat, Larkin has a reputation for two-way hockey that hasn’t always been deserved, but has definitely rounded out in recent seasons.
Both players are coming off of very similar contracts. Larkin had been signed for five years at a $6.1 million AAV, whereas Horvat was making a $5.5 million AAV over six years. Both are going to get massive raises this offseason, one way or another, though Larkin seems the more likely of the two to receive that raise from his current team.
Larkin, it should be noted, is more than a year younger than Horvat.
The O’Reilly comparisons are a little harder to draw, but they’re there all the same. At 31, O’Reilly is hitting free agency at a significantly later age than Horvat or Larkin, and is thus well beyond his best days. As of this writing, O’Reilly has just 15 points in 34 games, easily his worst offensive pace since his sophomore season, to go along with a staggering -26. The man they call “ROR” is also the highest-paid of the group, coming off a seven-year, $7.5 million AAV contract.
With all that stated, it’s fairly clear that O’Reilly will have less value, on either the trade or free agent market, than Horvat or Larkin. Then again, reputation goes a long way in hockey, and O’Reilly’s reputation is arguably stronger than either of theirs. For all their vaunted leadership abilities, O’Reilly has actually led his team to the promised land, winning the Stanley Cup in 2019 and picking up the Conn Smythe Trophy as playoff MVP along the way.
And where Horvat and Larkin are just kind of known as decent defensive players, O’Reilly has the hardware to prove it, with the 2019 Selke Trophy in his cabinet and a 2020 Selke nomination to go along with it.
O’Reilly’s intangibles put him, at the very least, in the same general value ballpark as Horvat and Larkin.
Other upcoming UFA centres worth mentioning here are Jonathan Toews, Jordan Staal, Joe Pavelski, and Sean Monahan, but for various reasons, they’re not really in the same discussion.
So, what does it all mean for the Vancouver Canucks, around whom our universe revolves?
If contract negotiations are indeed ongoing in Vancouver, either player could serve as a direct comparable for Horvat should they sign extensions of their own. In this case, it is Larkin who the Canucks should really be focused on, as his own contract is expected to be in the same range — and maybe even represent the upper limit — of Horvat’s own.
But the far greater impact of the Larkin and O’Reilly situations on Vancouver will come if they are not themselves extended, and if they each officially hit the trade block in the weeks leading up to the 2023 Trade Deadline.
Should the Canucks decide to trade Horvat, they will obviously want to maximize their return. Usually, that’s done by initiating a bidding war, and there’s certainly potential for one to erupt over Horvat’s services.
That said, nothing scuppers a bidding war quite like a surplus of supply. When the teams you’re hoping to have bid against one another for your player also have the ability to bid for other, similar players, it can complicate the whole thing, and it can definitely lead to less value returned all around.
That’s why the Canucks need to keep a close eye on Detroit and St. Louis. Whether Larkin or O’Reilly re-sign or not, it’s all going to be about the timing. Trade Horvat now, and watch a more desperate team pay up twice as much for Larkin closer to the deadline. Wait too long to trade Horvat, and watch another team go with O’Reilly instead, leaving the Canucks scrambling to find another suitor.
A best-case scenario for the Canucks would be Larkin and O’Reilly both being removed from the market well ahead of the Trade Deadline, either by extension or by trade. That would leave the Canucks with plenty of time to rouse up an unencumbered bidding war. But with each day that passes beyond the holiday roster freeze, that outcome becomes less and less likely.
Like we said, call it the ultimate case of Canucks Luck.
Editorials
Recent articles from Stephan Roget