By Faber
21 days ago
It’s Tuesday and that means it’s time for another Blackfish Prospects Report here at CanucksArmy!
We will look back at the week that was for Canucks prospects and see how the draft picks and young players have been performing as well as note the interesting storylines that go along with these young players.
Let’s dive into what has happened over the last seven days.

Sweden always gets its own heading

Death, taxes, and Canucks prospects playing in Sweden.
We will start with right-shot defenceman Filip Johansson, who Patrik Allvin spoke about when we asked him if any defence prospects will be coming over to play pro hockey in North America next year. Allvin told us they wanted to have Johansson here this season but respected his wish to play the 2022-23 season in Sweden.
Johansson is continuing to get a lot of minutes in the SHL this year. He played 21:43 on Thursday and had three shots on net in the game. He played 21:09 on Saturday and had impressive numbers when it comes to possession. His Corsi percentage was 74% in the game and even more impressive was his expected goals for percentage as he was on the ice for 2.01 xGF and only 0.25 xGA — that’s good for a 89% control of expected goals.
We like what Johansson is doing offensively and he is continuing to be relied upon as a primary puck mover in the SHL. There weren’t any big highlights we wanted to get to from his two games but here’s a strong shot on net that he had during Saturday’s game.
Hearing that he is going to be coming over to North America next season is good news. We hope that he can continue his success from the SHL to the AHL next year and maybe even make the jump from SHL to NHL as seamlessly as Nils Aman has this year.
Through 20 games, including both SHL and Champions League play, Johansson has attempted 121 shots, has 56 shots on net, four goals and nine assists. He is averaging 19:43 of ice time this year.
Here’s a look at Johansson’s shot chart. 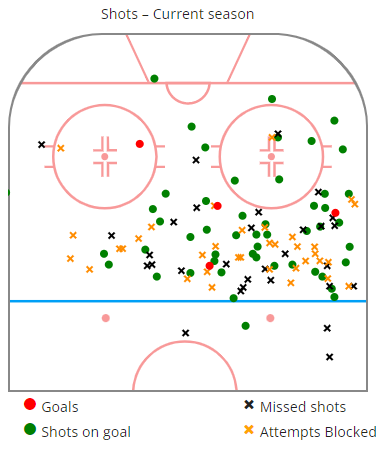 Lucas Forsell has been loaned to an Allsvenskan team after not seeing a ton of consistent minutes in the SHL and being too good for the J20 league. He played on the second line on Saturday with his new club BIK Karlskoga and set up the game-winning goal in the final minute of regulation.
Elias Pettersson (D-Petey) played in three SHL games this week. He played 4:34 on Tuesday, 4:44 on Thursday, and 1:15 on Saturday. He has been invited to play in the 4-nations tournament with Sweden in preparation for the World Junior Championships and though the low SHL minutes are not ideal, at least he is playing games in Sweden’s top league.
It’s now time for the Canucks’ top prospect, Jonathan Lekkerimäki.
He had an assist on Wednesday and played in a total of three games this week.
Here’s the assist.
It feels like Lekkerimäki has turned the corner when it comes to his play at even strength. He was dominant on Saturday and posted an 80% Corsi while having an 88% xGF percentage in the game.
Lekkerimäki was also selected to Sweden’s squad for the 4-nations tournament and will participate in the WJC primer that begins on November 7th and wraps-up on November 13th.

Off to school in the NCAA

Aidan McDonough had two goals on Saturday in a 4-1 win over Maine.
He is now up to six goals and four assists in 10 NCAA games this season.
Jacob Truscott is continuing to put up points as the top-pairing guy for Michigan.
Truscott is playing the left side on a pairing with Luke Hughes and not has nine points in eight games. He added two assists on Saturday and one assist on Friday in games against Western Michigan.

Linus Karlsson scored a between-the-legs goal on Friday night in Abbotsford’s home opener. He is now up to eight points in six AHL games and looks like the best player on that AHL roster.
Connor Lockhart had five points over two OHL games this past week.
Here’s one of his better assists from the week.
He had two goals, one was an empty netter and this is the other goal he scored.
Lockhart is now, once again, back at the top of the league for scoring.
He has 18 points in 12 games, which ties him for third in the OHL.
We also saw a goal from the OHL defenceman, Kirill Kudryavtsev on Friday night. It was a full-rink sprint as the left-shot defenceman made his way through the neutral zone and found an unbelievable amount of space to get a shot off.
The two Liiga defencemen, Joni Jurmo and Viktor Persson, each had a quiet week over the last seven days. They had a few Liiga games each but didn’t really catch our eye with anything.
Danila Klimovich was a healthy scratch on Saturday night in Abbotsford. AHL head coach Jeremy Colliton said that there is a lot of competition out there for ice when we asked him about why Klimovich was chosen as a healthy scratch. We will follow along with Abby and see if this becomes a trend…
That wraps up our weekly Blackfish Prospect Report. If you want to hear from a certain prospect, let me know in the comments. If there’s a player that I’m not talking about enough, let me know in the comments as well.
This article is about giving YOU what you want when it comes to prospect coverage.
If you have any requests, please let me know in the comments. See you all next week.
Editorials
News
Recent articles from Faber