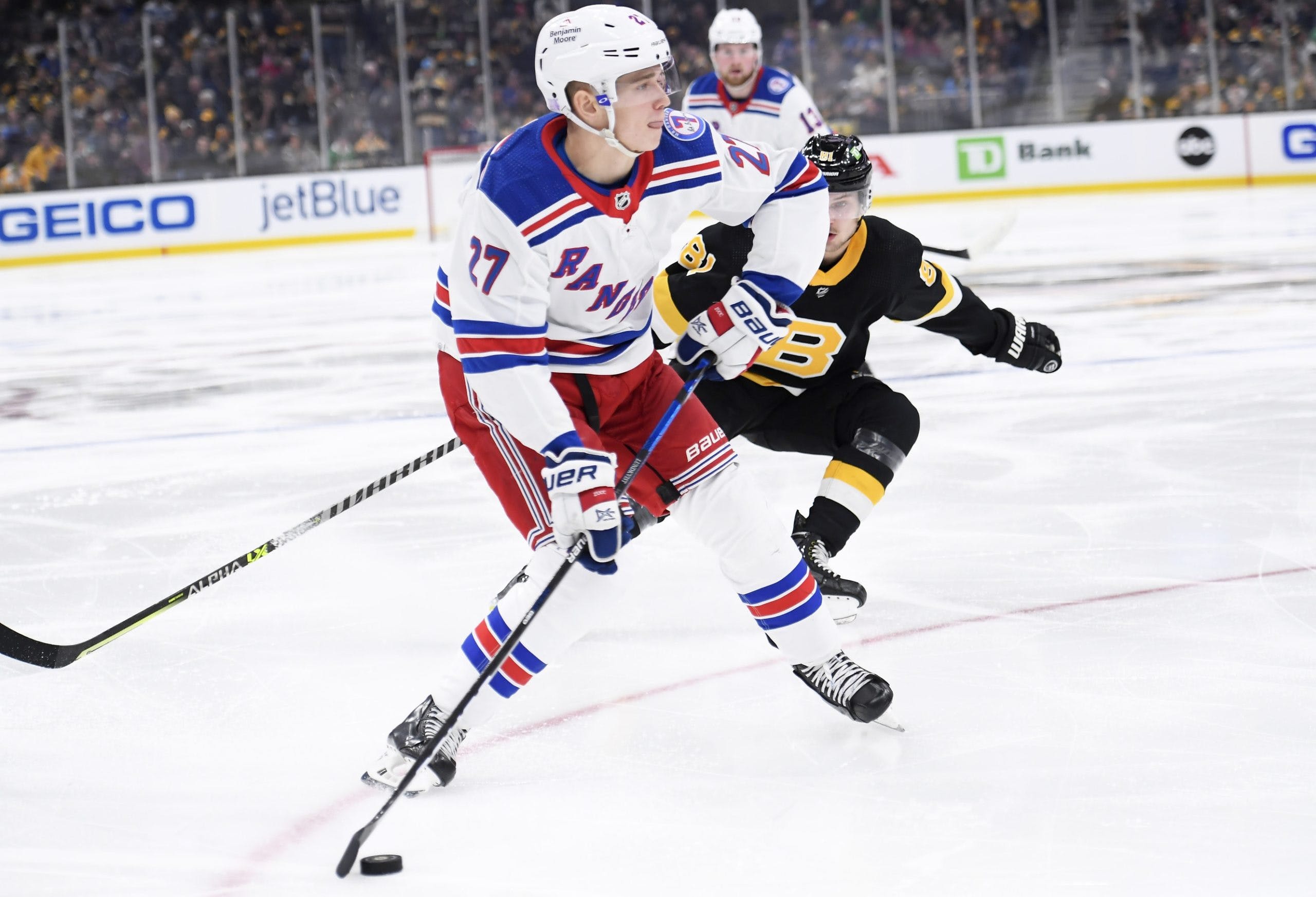 By Lachlan Irvine
2 months ago
The Canucks’ bid to corner the market on NHLers named Nils wasn’t meant to be.
On Monday afternoon the New York Rangers traded defence prospect Nils Lundkvist to the Dallas Stars for two conditional draft picks, a 2023 first and a 2025 fourth. The 22-year-old Swedish defender had been drafted 28th overall by New York in 2018, and split last season between the Rangers and their AHL affiliates, the Hartford Wolf Pack, scoring four points in 25 NHL games and 15 points in 34 AHL games.
Lundkvist’s chances of cracking a deep Rangers right side that includes Adam Fox, Jacob Trouba and Braden Schneider were incredibly slim, which led his camp to ask the Rangers for a trade to a team with more NHL opportunities on the blue line. Based on a report three days ago by Rangers writer Vince Mercogliano, Lundkvist was prepared to sit out of New York’s training camp to force the team’s hand, and the Rangers quickly acquiesced.
Dallas presented exactly the chance Lundkvist is looking for. Behind All-Star Miro Heiskanen, only Jani Hakanpaa and Colin Miller sit in front of Lundkvist on the Stars’ right-handed depth chart.
But the price to land the former 2018 first-rounder wasn’t cheap. Despite little leverage, Rangers GM Chris Drury managed to snag a top-10 protected first-round choice in the 2023 draft – which could roll over to an unprotected first in 2024 – and a fourth-rounder in 2025 for a player with just 25 NHL games under his belt.
For Stars GM Jim Nill, the cost was outweighed by the belief that Lundkvist can help the Stars win sooner than later. With a core split between two different eras, Dallas is hoping a more youthful makeup will ease the workload for veterans like Joe Pavelski and Ryan Suter while helping the Stars keep up in the increasingly speedy Western Conference.
Compare that situation to the Canucks, who were also in on the Lundkvist sweepstakes as recently as yesterday morning. Considering Vancouver’s shallow prospect cupboard and lack of guaranteed playoff success, it’s doubtful that Patrik Allvin would’ve been willing to part with a first-round pick to get a deal done. But the eventual trade does give us a window into the going rate for a young, right-handed defender, and it might be out of the Canucks’ realistic price range.
In the same report where Sportsnet’s Elliotte Friedman discussed the Canucks’ interest in Lundkvist, he mentioned Carolina’s Ethan Bear as another target for Vancouver. The 25-year-old defender’s $2.2 million cap hit is the biggest sticking point due to Vancouver’s lack of cap space, but given Bear’s larger NHL resume compared to Lundkvist, the cost to acquire him is likely about to go up.
With the UFA market completely barren at this point in the offseason, the Canucks are running out of viable options to improve their defence. If Vancouver can swing a deal that includes current roster members rather than future ones (like the trade options our own Stephan Roget suggested) there might still be a reasonable package out there for Bear or a defender of equal talent.
Who do you think won the Nils Lundkvist trade? Do you think the Canucks should’ve made a bigger pitch to acquire him? Let us know in the comments below!
Content
Recent articles from Lachlan Irvine