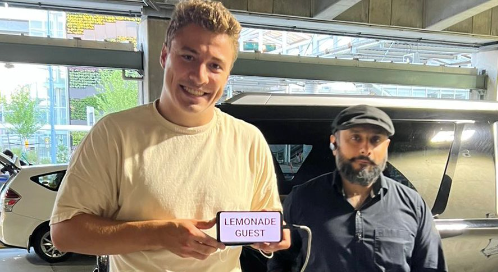 By David Quadrelli
5 months ago
If you needed any indication that Vancouver Canucks training camp is just around the corner, this should make it clear as day.
Folks, Andrey Kuzmenko has officially arrived in Vancouver.
The top European free agent of the offseason, the 26-year-old Kuzmenko announced his decision to sign with the Canucks in June, and the contract was made official by the club on the first day of free agency in July.
Kuzmenko, who tallied 53 points in 45 games with SKA St. Petersburg of the KHL this past season, has legitimate top six upside, and boasting a strong two-way game, should have no problem slotting right into the Canucks’ lineup on a top nine scoring line.
And as a sidebar, how nice is it of Roberto Luongo to take time out of his busy schedule to pick up Kuzmenko from the airport to make him feel right at home in Vancouver? Or maybe that’s just a doppelganger? We really can’t tell.
We reached out to Kuzmenko’s agent Dan Milstein to check in on what the meaning behind “Lemonade Guest” is, and he told us it’s a very funny story and urged us to ask Kuzmenko about it at training camp.
So stay tuned for that…
Our guess is it has something to do with this story that Milstein told on Donnie and Dhali:
For our full breakdown of Kuzmenko’s strengths, weaknesses, and what we believe he’ll ultimately bring to the Canucks’ lineup, click below.