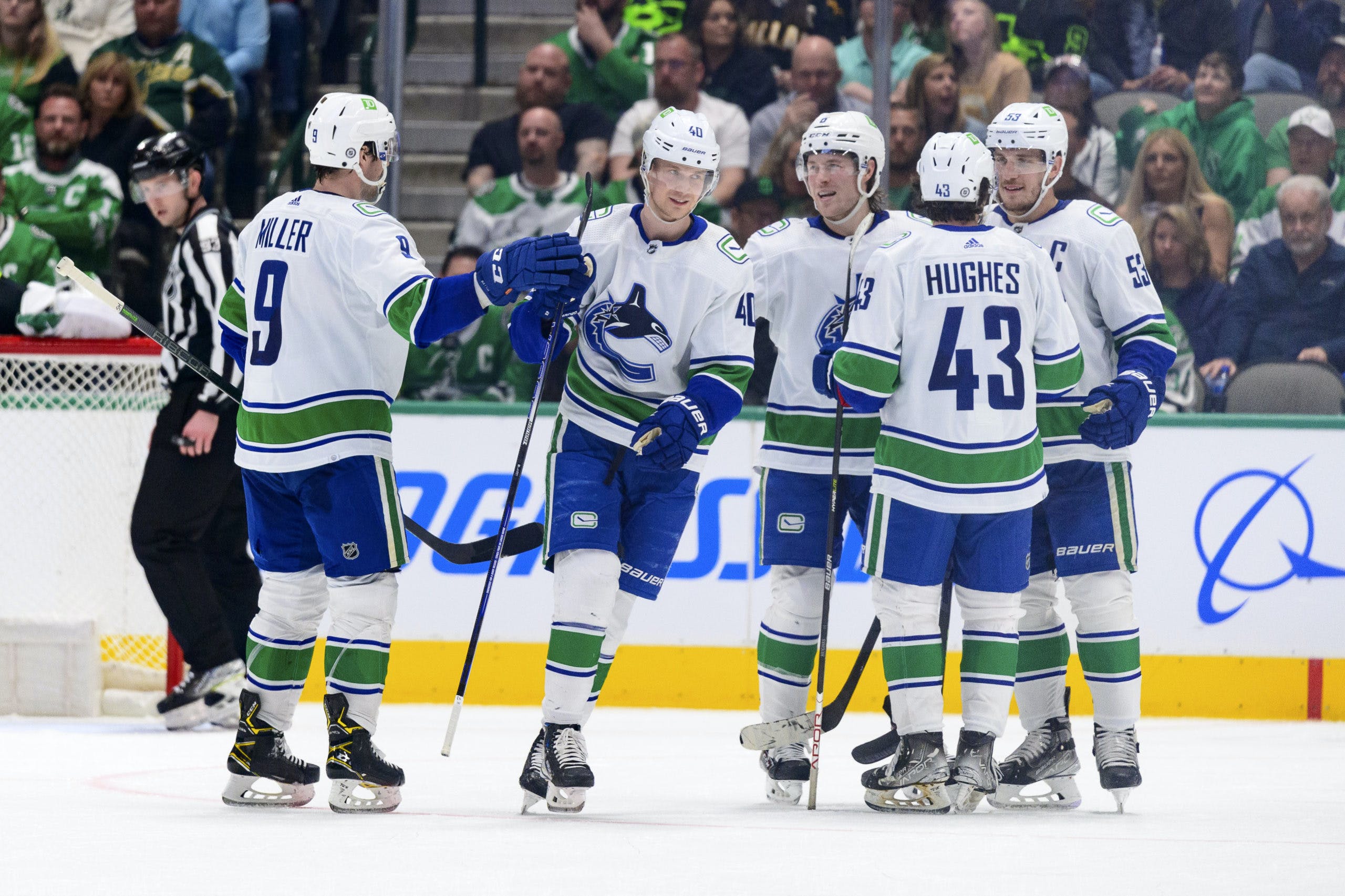 By Noah Strang
5 months ago
As it stands, the Vancouver Canucks have made considerable upgrades to their forward group. After a late-season push saw them fall just short of the playoffs last year, the Canucks have only gotten better up front and will hope that the upgrades are enough to push them into the postseason.
One advantage that the Canucks hold that works towards their goal of achieving the postseason is that they compete in the relatively weak Pacific Division. Last year the Pacific Division only had two teams that recorded at least 100 points. In contrast, the Metropolitan had four, the Atlantic had four, and the Central had three as well as the two wild card teams in the Western Conference.
That’s not to say the same thing will happen this season. Plenty of Pacific Division teams have had tons of turnover and there will be several new faces playing in the division, as well as familiar faces that have gone elsewhere.
Besides goaltending, the Canucks’ forward group will be relied upon to win games. Will it be enough against Pacific Division foes?
Here’s a complete ranking of each team’s forward group. Each team was graded on three metrics (best player, best line, best depth) and rewarded points based on its ranking. The final results will be tabulated at the bottom. Score it like golf where the lowest number wins.

It’s hard to grade Terry who had a scorching hot start to the season last year and finished with 37 goals. The Ducks have a collection of young talent up front that know how to put the puck in the back of the net, even if they’re still learning some of the finer points of the game. It will be interesting to see if Terry can replicate his success this year.

There’s a chance that this ranking looks really stupid a year from now as both Zegras and Terry could take big leaps forward. However, as it stands, the Ducks are still too young to contend with the other teams on this list. Henrique is not a first line player and could be moved sometime during this season to a team making a playoff push.

The Ducks aren’t very deep as they’re still in a rebuilding phase and offering lots of opportunity to young players. They do have some interesting young players like Isac Lundeström, a 22 year-old centre and former first-round pick that scored 16 goals last season. However, as a unit, the Ducks are lacking talent in their bottom-six.

For a minute it seemed as if the Calgary Flames were headed towards a rebuild after they lost Johnny Gaudreau and Matthew Tkachuk demanded a trade. Instead, they managed to flip their young power forward for a package that include Huberdeau, a gifted playmaker that scored 115 points on a high flying Panthers team. We will see how his production translates after moving from a team that scored 4.1 goals-per-game to a team that scored 3.5 last season.

The Flames would have ranked higher on this list with their roster from a year ago. They still slot in third because of Huberdeau’s playmaking abilities and Lindholm’s presence in the middle. The centreman managed to score 40 goals last season while also playing great defence. All in all, a very solid top line that should give opponents plenty of trouble.

Take a look at the Flames’ top-six and you’ll likely be very interested in some of the possible combinations. Shift your vision to the bottom-six and things begin to get ugly. They still have the albatross of a contract that is Milan Lucic and have the disappointing Sean Monahan who has never been able to regain his form.

There’s no debate that Connor McDavid is the best player in the Pacific Division, or the entire league for that matter. Even teammate Leon Draisaitl would have finished atop this category. There’s not much that hasn’t been said about McDavid who is the best player the league has seen in a long time.

With the ability to play two of the top five best forwards in the world on the same line, it’s no surprise that the Oilers finish first in this category as well. The franchise’s willingness to turn a blind eye to Evander Kane’s personal life has paid off for them on the ice, though also speaks to the culture of the organization. When this trio is on the ice together, play is rarely in the Oilers’ end.

It’s no secret that the Oilers don’t have a ton of forward depth. The additions of Kane and Zach Hyman over the past ~12 months have helped bolster the group, but beyond McDavid and Draisaitl there isn’t a ton to get excited about. The signing of Mattias Janmark during the offseason will hopefully add some speed, though there are still plenty of holes.

The Kings’ best forward is a debate between sniper Kevin Fiala and longtime centreman Anze Kopitar. Fiala is closer to his prime and thus he gets the nod here. Canucks fans will be familiar with Fiala as he gave the team nightmares when he was a member of the Minnesota Wild. He possesses a great shot and adds a high-end scoring threat to a young and up-and-coming Kings team.

The Kings have managed to build a solid first line. Trading one of their many defence prospects for Kevin Fiala helped them add the high end scoring threat to add to Kopitar’s flank. Kempe is also one of the more underrated players in the Pacific Division as he scored 35 goals last season.

The Kings have some interesting pieces in their bottom-six and plenty of breakout candidates. Quinton Byfield will likely start the season in that area and — as a former number two overall selection — will be expected to work his way up the lineup. Arthur Kaliyev is another young player that scored 14 goals last season and is still in his early 20s.

Last season marked a breakout year for Meier who established himself as one of the best goal scorers in the Pacific Division. He scored 35 goals and added 41 assists, finishing only a single point under the point-per-game mark. He scored five goals in a single game in January of this year and can put a puck in the back of the net at any time.

This line is a left winger away from moving up the list. Both Meier and Hertl are dangerous offensive threats, each scoring at least thirty goals last season. Barbanov played his first full NHL season last year and did manage 39 points. That’s nothing to laugh at but not close to some of the other names on this list.

The Sharks have a lack of depth with several weak players slated to get solid minutes. 34 year old Nick Bonino is going to play a middle-six role. The Sharks are hampered by plenty of terrible contracts and have not been able to add supporting pieces as a result.

The Seattle Kraken were a tough team to pick a best player for because of a distinct lack of star power. Newly acquired Oliver Bjrokstrand had a good season in Columbus last season, almost scoring 30 goals. Schwartz is also an electric forward who missed lots of games last season. Neither is good enough to raise Seattle from the bottom.

Heading into last season, many experts predicted the Kraken to be competitive for a playoff spot, yet they fell well short. Again this year, the Kraken look solid on paper. That first line is nothing to sneeze at but it remains to be seen how they will perform. One thing that resonates throughout the Kraken forward group is the absence of a true star, something that other teams in the division have multiple of.

For all the talk about the Kraken’s lack of star power, there is solid depth throughout the lineup. This is partly due to the nature of the expansion draft that allowed the Kraken to fill out a team of solid if unspectacular players. With middle and bottom six players like Brandon Tanev, Alexander Wennberg, and Yanni Gourde, the Kraken have some very good role players.

J.T. Miller is coming off a career season where he scored 99 points and was the Canucks most impactful forward. You can make the  argument that he should be second on this list after the season he had. The biggest question about Miller is which team he will be playing for next season.

The Canucks have so many options with their forward lineup but one of the most potent still looks to be the “Lotto Line”, at least on paper. Every player on this line is a threat to score thirty goals and very well could this upcoming season. This is one of the most balanced lines in the Pacific Division as each player is a legitimate first liner.

The Canucks ranking first in depth should come with an asterisk that it could all change if management trades some of the pieces, a scenario that still seems fairly likely. As of today, the Canucks have strong depth throughout the lineup. They have plenty of good wingers with a mix of veterans like Tanner Pearson and young players like Vasily Podkolzin and Nils Höglander. The forward group is not of concern for the Canucks.

This was one of the hardest teams to grade. When healthy, Jack Eichel is one of the best centres in the league. While he’s never put up a 99 point season like Miller just did, he has suffered through injuries and the situation in Buffalo. The Golden Knights also have Mark Stone whose two-way game would place him high on this list.

The Golden Knights likely first line features both Jack Eichel and Mark Stone. That’s a scary duo for any team to go up against, though both players struggled with injuries last season and failed to show a ton of chemistry in the limited minutes they did get together. However, the pure talent that oozes from this line is too much to ignore. The speedy Chandler Stephenson is also not one to forget about as he had 64 points in 79 games last year.

The other expansion team ranks high in the depth category. What a shocker. While the Golden Knights forward group isn’t as deep as it once was, they still have lots of solid players under contract. Keegan Kolesar was just re-signed to a multi-year deal that will keep the power forward in the desert. Nicolas Roy is another bottom-six forward that would play on many Pacific Division team’s second line.