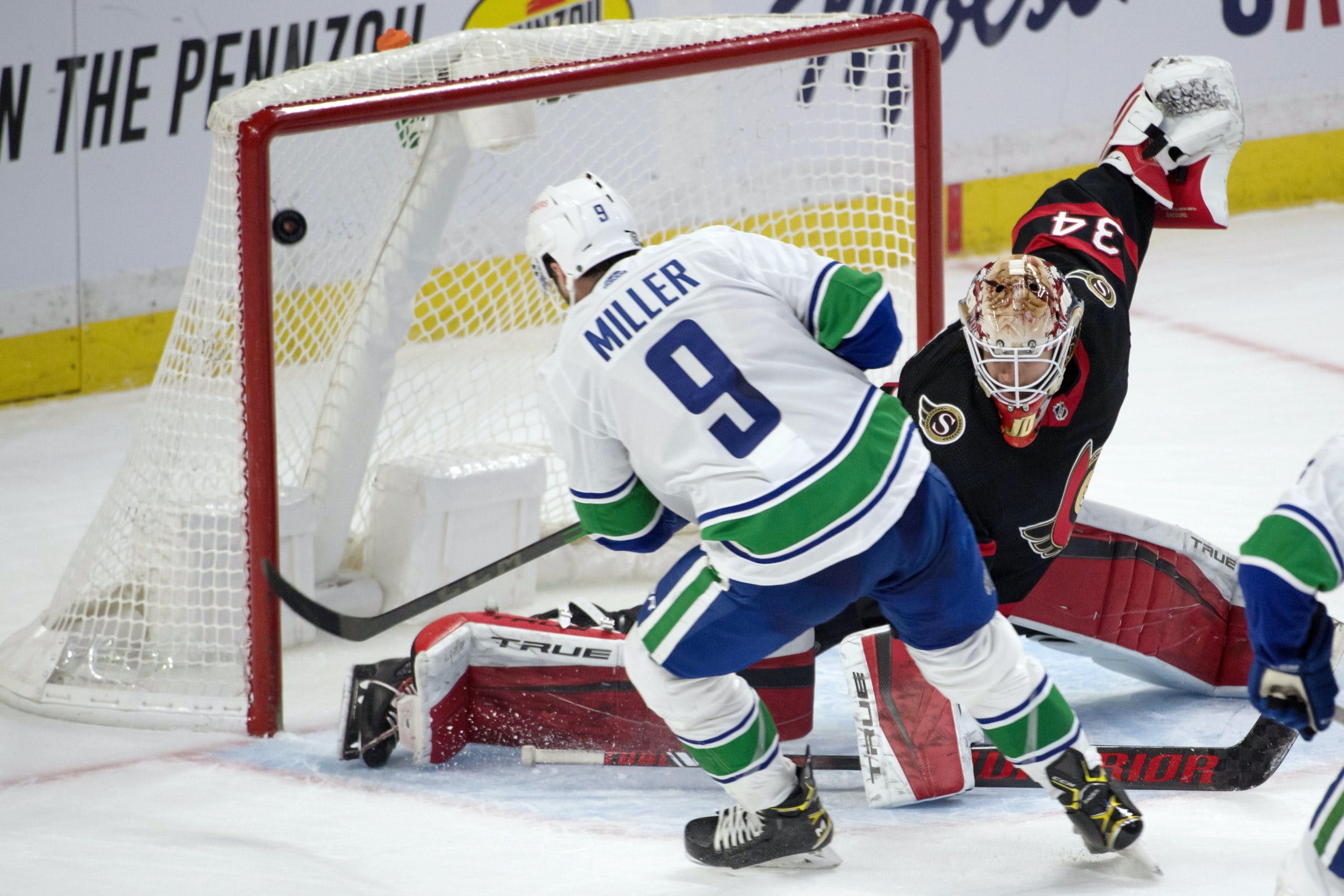 By Bill Huan
1 year ago
One of the most important questions for the Vancouver Canucks heading into next season is where J.T. Miller will play in the lineup. The 28-year-old got an extended look at centre after Elias Pettersson suffered a season-ending injury, which made many fans wonder if he should be the team’s 3C instead of a top-line winger.
Now, there are many factors that will impact Miller’s position that we can’t consider yet, such as potential free-agent signings and trades. Even so, we have enough data of him playing centre to provide a general picture of how “3C Miller” could impact Vancouver. As you’ll soon see, the team should be fine offensively, but questions remain on defence.

After Pettersson went down with his injury on March 2nd, Miller was deployed down the middle and produced admirably when looking at his raw stats.
However, he still had Brock Boeser on his wing most of the time, which won’t be the case if he does slide down to the third line. A more accurate representation of Miller’s production would be when he’s away from both Pettersson and Boeser, and the numbers at five on five aren’t as pretty.
The Lotto line has unsurprisingly dominated opponents whenever they’ve been intact. However, their numbers take a huge dip when Miller is playing elsewhere, which is one reason why Travis Green has been so reluctant to separate them over the past two seasons.
The good news is that Nils Höglander will likely replace Miller should the latter play 3C, and the young Swede has already become one of the team’s best play drivers. In fact, Höglander led Vancouver in corsi this season at 50.43% and was second to Pettersson in expected goals at 49.90%, all while playing tough matchup minutes. He was also second on the Canucks in five on five points with 26, only behind Boeser who finished with 28. Höglander will be a downgrade to Miller, but a line featuring him, Pettersson and Boeser remains a dominant trio given their play-driving abilities and two-way intelligence.
Miller, on the other hand, is a more interesting case. Although there isn’t any data that specifically outlines his production when he plays centre, we can safely assume that Miller’s deployed as a pivot whenever he’s away from Pettersson given that he rarely plays on Bo Horvat’s wing. Looking at the table, the Canucks have scored 1.61 goals per 60 minutes when he’s separated from Pettersson and Boeser, which is still a middle-six rate but far below what we’ve accustomed to seeing.
Fortunately, there are signs that indicate he will experience an uptick in production; the team’s on-ice shooting percentage is 6.32% when Miller plays away from the top line, which is an unsustainably low figure that is bound to increase. If Vancouver is able to finish more of their chances, then Miller’s production will creep closer to his 2.07 expected goals number, which is a decent top-six rate.
Miller also started many of his shifts in the defensive zone, as he took 42% of his draws in Vancouver’s end as opposed to 30% in the neutral zone and 28% in the offensive zone when he wasn’t paired with Pettersson or Boeser. In comparison, the Lotto Line started a whopping 72% of their faceoffs in the offensive zone, and this explains Miller’s drop-off in points. It’s worth noting that the majority of shifts come on the fly during line changes, but his zone starts still indicate that Miller has been utilized in a defensive role when he’s been off the top line, so it’s unreasonable to expect him to produce the same offensive totals.
Factoring in everything, Miller will still likely produce at a credible top-six rate as the team’s 3C given his power-play usage and some positive regression to his expected goals figures. Vancouver’s first and second-line will undoubtedly take a hit but they’ll have a reliable third-line too, which is an interesting trade-off to consider.

What about the defence?

During Miller’s first season in Vancouver, he was a force on offence while being reliable in his own end. However, his two-way game deteriorated this year, much to Braden Holtby’s chagrin. Although his 2.34 goals against per 60 is an impressive number, Miller’s expected goals against has actually been 2.96 when he’s off the top line. That latter number is a much better representation of his defensive impact since Canucks goalies have sported a save percentage of .937% when he plays separately. Similar to how his 6.32% on-ice shooting percentage is unsustainably low, a .937 SV% is equally unsustainably high, and there’s no way that any goalie will continue bailing Miller out given that his defensive game this season was underwhelming to both the eye test and stats.
In order to pinpoint what went wrong with Miller’s defence, I went back and rewatched the Canucks’ final two home games, which gave him 27 games to get acclimated to playing centre following Pettersson’s injury in early March. The first thing that stuck out was the amount of times Miller would lose track of his man, often leading to a scoring chance against. In the first clip below, he drifts into the middle of the ice and doesn’t realize that Mikael Backlund is making a backdoor cut to the net.
This could’ve easily been a tap-in goal if Johnny Gaudreau made a cross-ice pass. Even without that happening, Backlund still got off a wide-open shot, albeit from a bad angle.
Miller also tends to prematurely exit the defensive zone at times, even when the Canucks are still under pressure. This habit is especially problematic for centres since they’re usually tasked with being the low forward to support breakouts and often acts like a third defenceman. As you’ll see in the next clip, Miller exits Vancouver’s zone (and the frame entirely) while Quinn Hughes is being pressured, leading to a turnover and shot from Backlund, who was once again Miller’s responsibility to cover.
Now, this play definitely wasn’t all on him, but Hughes could’ve had another passing option if Miller had skated towards the open ice in front of the net and provided more support down low, which is what centres are supposed to do.
Another reason why Miller’s defence deteriorated was due to a lack of effort at times. Fans  noticed his occasional lethargic play all year long, and the consequences were usually felt in Vancouver’s own zone.
Here, he forgot that social distancing isn’t needed on the ice and gives Johnny Gaudreau too much room to operate, resulting in a scoring chance for the Flames. Miller’s defensive intensity was simply not there for large stretches of the season, and it often led to the Canucks playing five on four in their own zone while he took his time skating back without any urgency.
Now, depending on your perspective, this might not be as big a problem as it seems; Miller was lauded for his motor during the 2019-20 season, and if he could get that back, then his two-way game will undoubtedly be boosted as well.
Unfortunately, it’s much harder to improve a player’s defensive awareness, so Miller will likely still experience brief lapses in judgement like the ones shown in the first two clips. His shortcomings are reflected in his stats as well, as the Canucks have conceded more expected goals against at five on five than league average in both of Miller’s seasons in Vancouver. 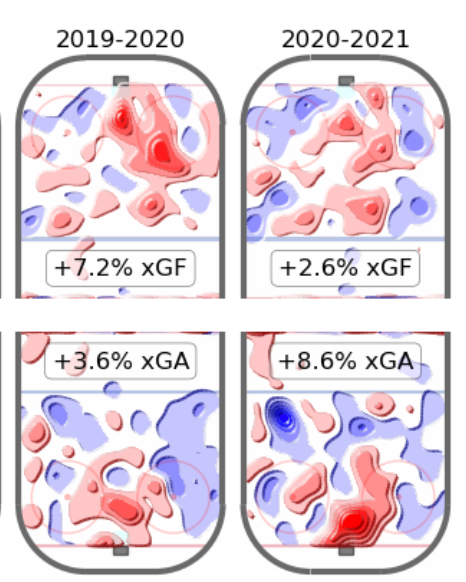 The red spots on the bottom graphs show the locations where Vancouver tends to concede the most shots against, and it’s evident that Miller hasn’t done a great job of protecting the net-front whenever he’s on the ice. The difference between this year and last is that Miller was largely able to outscore his defensive shortcomings in 2019-20, which wasn’t the case this season.
With that said, Miller has actually been a positive defensive player before, and as recently as his 2018-19 campaign in Tampa Bay. However, those results were produced when he wasn’t expected to carry such a large offensive load, so it’s unrealistic to expect him to reach those heights again given the Canucks’ lack of scoring depth.
Of course, one reason to slot Miller in as the team’s 3C is to allow him to play against weaker opponents. The issue here is that quality of competition doesn’t actually impact a player’s performance all that much, so it’s unrealistic to expect Vancouver’s third line to turn into Pittsburgh’s vaunted HBK line during their cup runs or the Lightnings’ current trio of Barclay Goodrow, Yanni Gourde, and Blake Coleman.
A more reasonable projection of Miller’s impact as a potential 3C would be a line that would be roughly break-even in goals share. If this sounds underwhelming, it’s important to remember that Miller has put up lacklustre numbers when not paired with Pettersson and Boeser, and he’ll be playing with less talented linemates as well. Moreover, the value of this hypothetical third line will mostly be produced through Miller’s offence, as his defensive contributions are average at best even if he improves his two-way efforts.

Before the Canucks can make a final verdict on where to play Miller, there are a few more factors that will impact the team’s ultimate decision.
If those factors don’t come to fruition, it’s still worth trying Miller at 3C just to see if the results are positive. The first line will continue being productive given Pettersson and Boeser’s chemistry along with Höglander’s versatility, while Horvat has made a career out of carrying the second unit no matter who his wingers are. Just remember to temper your expectations of Miller as a 3C since his playstyle and stats show that he’s better suited to the wing, especially alongside Pettersson. Even so, a reliable third line is still far better than what the Canucks have deployed in recent seasons, and the team will need to decide if icing a more balanced top-9 is worth breaking up one of their only competitive advantages: the Lotto Line.
Stats courtesy of Natural Stat Trick and HockeyViz.
Uncategorized
Recent articles from Bill Huan