Advanced stats from the World Juniors: Elias Pettersson has been excellent while Jonathan Lekkerimäki took a step back against better competition

By Faber
28 days ago
We are on to the quarterfinals of the 2023 World Junior Championship in Halifax and Moncton.
All three of the Canucks prospects have advanced to the playoff round and have had a different experience at the WJC so far.
Let’s quickly get the Finnish goalie out of the way before we dive into the two Swedes.
Aku Koskenvuo was drafted in the fifth round of the 2021 NHL Entry Draft. He is a 6’4″ beast with great movement, flexibility, and athleticism. Long term, Ian Clark and the Canucks are hoping to mould the naturally talented youngster into something special.
As for this tournament, Koskenvuo has been average at best. He allowed six goals on 30 shots against the Americans and was beaten three times on 27 shots by the Swiss in a 3-2 overtime loss. It hasn’t been a great tournament for him, but whatever, he’s a goalie and goalies are either hot or cold. Clark will get to work with him soon enough, and Koskenvuo is very firmly a long-term project.
Now for the position players, we have some interesting advanced stats on both Elias Pettersson (D-Petey) and Jonathan Lekkerimäki.

The 2022 third-round pick has done nothing but impress since he was drafted.
He’s playing physically, doing a good job retrieving the puck in his own end, and has shown that he can break out the puck by skating it himself or passing it off to a forward.
His possession numbers and expected goal stats have been good up to this point in the tournament. 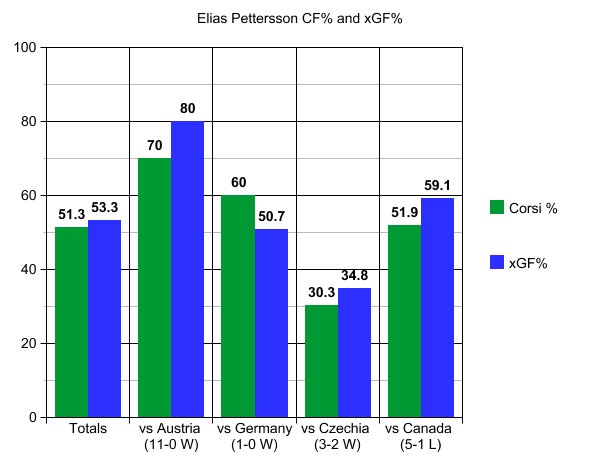 Pettersson is holding a 51.3% Corsi through the opening four games of the tournament and a 53.3% control of expected goals.
The most impressive game had to be the Canada game, where Pettersson held a 59.1% control of expected goals, the highest xGF% of any Swedish defenceman. In the big moment, Pettersson stepped up, and you love to see that at a tournament like this.
Pettersson didn’t have a great game against Czechia and got caught reaching to cover the slot on one of Czechia’s goals. For the most part, his defensive play has been very impressive as he’s using his long reach to disrupt possessions. When he closes in, he’s also been able to hit players off of the puck.
All in all, it’s been a good start for Pettersson, who has been in a third-pairing role for every game this tournament and will be eligible to play at next year’s World Juniors.

It was a promising start to the tournament as Lekkerimäki found the back of the net early.
He followed that up with a very strong possession game against the Germans — posting an 83.3% control of shot attempts and a 60.2% control of expected goals. 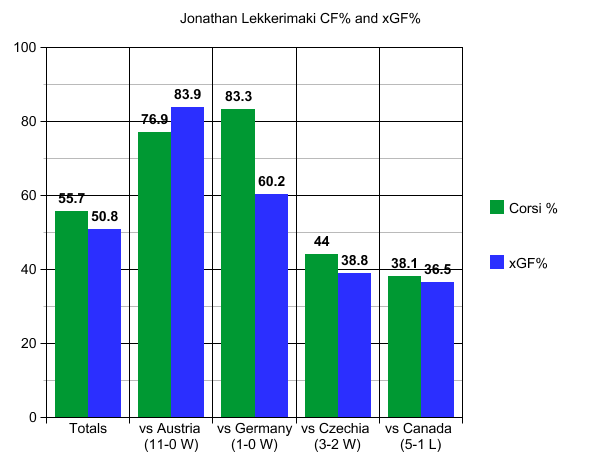 After those two strong games against weaker competition, Lekkerimäki began to struggle in the Czechia and Canada games.
After Sweden lost two of their top-six forwards, Lekkerimäki came up big for Sweden at the end of the Czechia game as his effort level showed well and he set up the game-winning goal in overtime.
Though the Czechia game saw ups and downs, the Canada game was where Lekkerimäki looked at his worst.
In the biggest game of the tournament so far for Sweden, Lekkerimäki had a weak performance and the reaction from Swedish fans on Twitter was pretty intense.

We still believe that there’s a lot of talent in Lekkerimäki’s game, but he needs to be less of a floater who is looking for shots and more of a hockey player who hunts for possession. It seems to be the same song and dance when we watch Lekkerimäki play. The kid could really be something, but he has not been able to take control of a game up to this point in the tournament.
Luckily for him, there’s still time for him to turn it around. Sweden battles Finland at 8:00 am on Monday and this is a good opportunity for Lekkerimäki to win back some Swedish fans as well as show Canucks fans why he deserved to be picked with the 15th overall selection in the 2022 NHL draft. We want to see Lekkerimäki challenged against these stronger teams, but this tournament is not the be-all, end-all for him. Lekkerimäki can play in next year’s tournament but the hope was that he could play well this year after having a tough start to his Allsvenskan season over in Sweden.
A big game against Finland would do wonders for people’s view of the 18-year-old winger.
Editorials
Recent articles from Faber