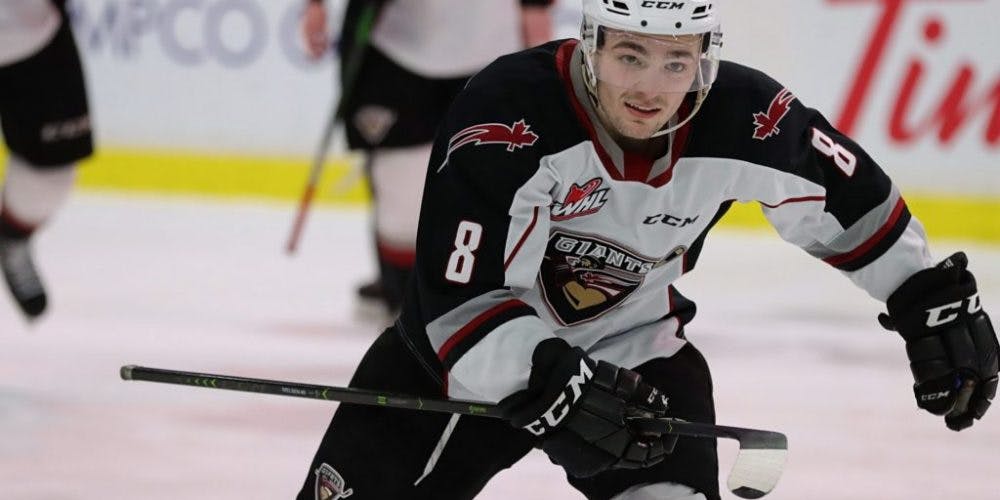 By Faber
1 year ago
After a strong 20-year-old season with the Vancouver Giants, winger Tristen Nielsen has signed an AHL contract with the Abbotsford Canucks and is excited to get to camp and show what he can do.
Nielsen scored 15 goals and added 17 assists in 22 games last year with the Giants and was ecstatic to hear the news that his signing announcement became official on Friday morning.
“I was just at the gym, and my phone kind of started blowing up,” Nielsen told CanucksArmy. “Then I saw that it was announced and I’ve just been texting my family, friends and coaches and saying thank you to everyone so it’s been an exciting morning.”
Signing with the Abbotsford Canucks was a dream come true for Nielsen, who has made Vancouver his home and fallen in love with the west coast lifestyle after growing up in Fort St. John and playing in Calgary during his early years in the WHL.
“Oh man, I love Vancouver,” chuckled Nielsen as he began to gush about the city and surrounding area. “It’s the best city I’ve ever been to. I love that area, I love how warm it is, I love that there are lakes around it, I love the ocean, I love the food, everything’s just kind of better there than where I’ve been in the past. I don’t really like the cold anymore. I grew up in Fort St. John, so I got enough of it when I was young, I don’t need that anymore.”
As one of the leaders of the Giants last season, Nielsen played right wing on the first line and says that he is comfortable playing on either side of the wing but likely won’t be taking any faceoffs any time soon.
“I’ve been a winger since I was about 16. I was told that I couldn’t be a center because I was too small so I got to switch to the wing and I’ve been there ever since. I like playing on my off-hand side and I like wing way more (than centre) to be completely honest.”
One of the reasons why Nielsen likes the wing so much is likely due to the chances it allows him to show off his best trait, his speed. It’s been noted around the league that Nielsen was one of the fastest skaters in the WHL last season and that speed helped him break away from defenders so that he could get his strong shot off.
“My speed is definitely my best attribute,” said Nielsen. “I’m very fast and I’m not afraid to go to the dirty areas but I also have a good, heavy shot, so my speed helps me get that away. I think my speed allows me to get open to use it so I think those would be my two biggest strengths.”
Nielsen also scored two shorthanded goals this past season and told CanucksArmy, “killing penalties would be a great place to start. Obviously, everyone wants to play power play time but that is earned, not given. Killing penalties works well for me because I’m not afraid to get in front of a shot, but I’m also fast enough to get back and fast enough to break away on a shorthanded rush if there’s a little bobble at the point or whatever it might be.”
As for his expectations, he has none but to be competitive at camp and earn a job.
“This year will be different,” said Nielsen. “I don’t really know what to expect, to be honest. I’ve never been to a pro camp, I was always cut short before them but I’m just looking forward to going in and, and just not have any expectations or high hopes in the sense that if I can just take it one day at a time and be the best I can be in any given situation then things will work out.”
As for connections to the team, Nielsen played with Carson Focht in Calgary. He knows Chase Wouters pretty well and has trained with a couple of the local kids in Kyle Burroughs and Devante Stephens. He also has a memory as a young teenager when Justin Dowling used to skate with him and would have all of his NHL gear on and Nielsen thought that was so cool and it motivated him to get better every day.
It’s great to see the Canucks staying local with a lot of their signings and this kid obviously loves to play in the Vancouver area. He will fight for a spot this season and if his game can translate to the AHL level, his speed and willingness to do anything to win will be a good youth boost to the Abbotsford Canucks’ bottom-six.
Uncategorized
Recent articles from Faber