By Cody Severtson
5 days ago
The Abbotsford Canucks’ first homestand of the season was not great.
Over three weeks, the Farm took on a trifecta of Pacific Division Rivals: 4th-place Coachella Valley Firebirds, 9th-place San Diego Gulls, and 10th-place Henderson Silver Knights.
They won three out of six games, earning seven points out of a possible twelve.
Now, the Farm heads east to begin a six-game Canadian road swing, starting with the third-worst team in the AHL, the Laval Rocket.

The Montreal Canadiens’ AHL affiliate is bad.
Like, really bad!
The Rocket are currently third-last in the AHL with a 3-8-3-0 record, a .321 points percentage, the third-lowest goals scored per game, the third-worst penalty-killing percentage, and the third-highest goals allowed per game.
Wait a minute. This team preview sounds eerily similar to last week’s.
During last week’s prediction, we predicted an Abbotsford series sweep of the Henderson Silver Knights. Instead, the Farm split the series with two very dull low-scoring games, scoring four goals while giving up four.
After the weekend, the Laval Rocket sit just barely above the Silver Knights in league standings by points percentage.

2022-23 AHL Standings as of 11/15/2022
You won’t see a series-sweep prediction for Abbotsford this week. Despite being ranked third-last in the AHL, the Laval Rocket and Abbotsford Canucks are comparable.

Though the Rocket have struggled mightily to prevent goals at even strength and on the penalty kill, the Laval Rocket have had no problems scoring goals. After fourteen games, the Rocket sit with the tenth-highest goals scored per game in the AHL.
The Rocket have four players on their roster who have scored four or more goals. The Canucks only have one, and Vancouver just called him up for their 5-4 victory in Buffalo.
On the bright side, the Laval Rocket are on a bit of a skid heading into their Wednesday matchup. The Habs’ AHL affiliate is on a three-game losing streak and is currently 1-5-0 through November. In six games played this month, they have scored 18 goals while giving up 26.

Last week, due to Henderson’s awful power play and position in the standings, we predicted an Abbotsford series sweep against the Silver Knights with a dominant goalscoring performance at 5v5.
Instead, they split the series with two very dull low-scoring games, scoring four goals while giving up four.
IN THEORY, the Farm should come away from the games against the Rocket with two victories. But this team has consistently disappointed in winnable games. So, we’re predicting another 50/50 series split.
Hopefully, there will at least be a lot of goals to make up for it!

Sandwiched between the two games against the Laval Rocket is a quick detour to the centre of the universe against the Toronto Maple Leafs’ AHL affiliate, the Toronto Marlies. How this back-to-back impacts the Leafs remains to be seen.
The Toronto Marlies are quite the opposite franchise of the Laval Rocket currently.
They’re good.
Like really good.
Through twelve games played, the Marlies sit second in the AHL by points percentage, third in goals scored, and third in goals scored per game, with the number one power play.

One thing’s certain: the Abbotsford Canucks must stay out of the box. They’ve been one of the best teams at keeping out of the box this season, with the fifth-lowest number of times spent shorthanded in the AHL.
At 73%, the Farm’s 28th-ranked penalty kill is no match for the Marlies’ monstrous power play, clicking at 31.5%
The Abbotsford Canucks’ defensive structure will be put through their toughest tests over these next four games. 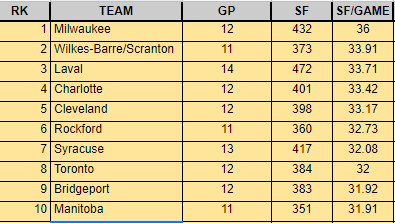 2022-23 Abbotsford Canucks: shots for/game
The Laval Rocket and the Toronto Marlies are among the best teams in the AHL at generating shots per game. Fortunately, through their ten games this season, the Abbotsford Canucks have the third-best rate of shots allowed per game in the league!
Sadly, despite the low rate of shots allowed, their goaltending struggled to keep what shots that do get through out of the net.

When we last predicted a series sweep against one of the bottom feeders, we forgot to factor in that this is a Vancouver Canucks affiliate, and we should always expect the dumbest/weirdest/most obvious result instead of the most logical.
We’re predicting that the Abbotsford Canucks will probably lose both games to the Laval Rocket but win both against the Marlies in a dominating fashion.
Editorials
Recent articles from Cody Severtson