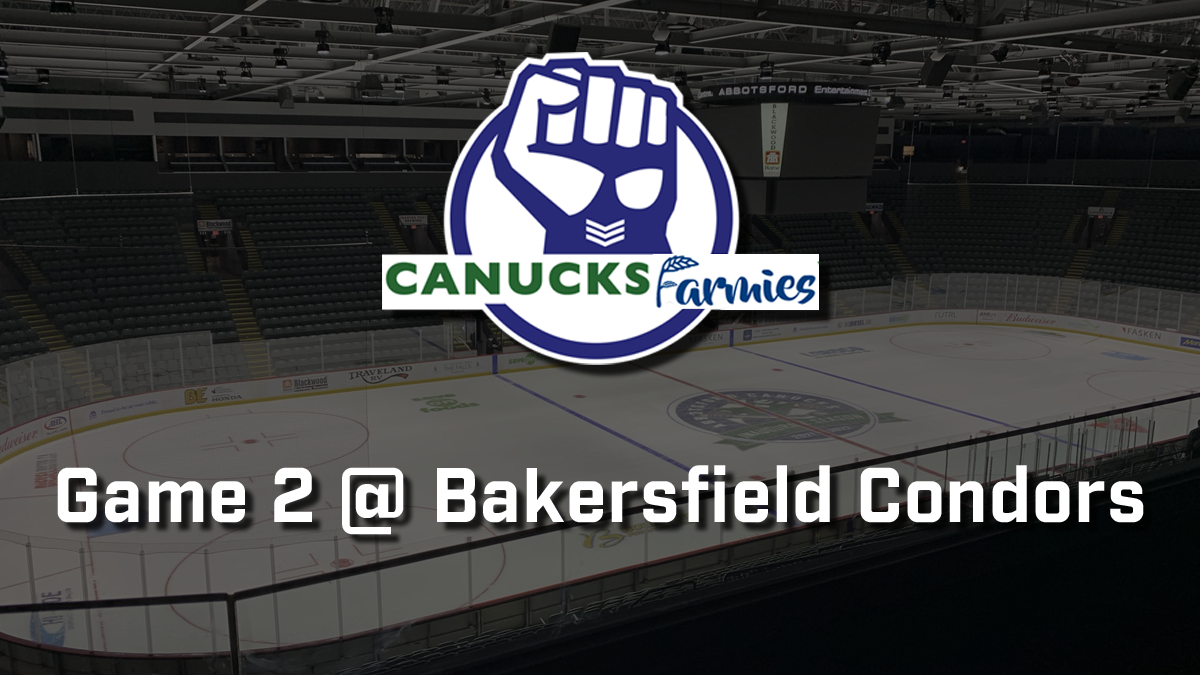 By Cody Severtson
1 month ago
After a stunning 8-2 loss to the Ontario Reign, the Abbotsford Canucks went North, up the I5, seeking vengeance against the team that swept them in last year’s Calder Cup Playoffs.
While it was no “Game 8” against the Bruins, it was nonetheless a gutsy back-and-forth effort by an inexperienced group seeking their first victory of the season!

1st Period
The first five minutes of the game could not have played out differently than they did against Ontario. While this one didn’t include four goals in five minutes, it had its fair share of defensive lapses and dangerous looks.
After avoiding suspension for his dicey hit from behind on T.J. Tynan, Danila Klmiovich started the game with a lackadaisical effort inside the defensive zone.

When you’re JT Miller, you can afford to plant your feed and attempt the one-handed stick-lift check.
When you’re Danila Klimovich in the AHL? You need to move your feet more and commit a bit harder to thwarting offence.

Fortunately, the young Belarusian made up for his earlier effort with a solid stretching poke check to disrupt a Bakersfield zone entry.
Both teams traded quite evenly until another lapse in d-zone coverage resulted in a Condors goal.
Goal: 1-0 Bakersfield Condors
Michael Kesselring from Luke Esposito and Dino Kambeitz

Poor Arturs Silovs had no chance on the opening goal. On just his fourth shot faced, a brutal two-man screen from Graham McPhee and his check, Noah Juulsen, gave Kesselring all of the space on the planet to pick his corner.
The Canucks spent quite a bit of time in the offensive zone but struggled mightily to find shooting lanes. Whenever the Condors’ entered the Canucks’ zone, they consistently found dangerous looks.

Arturs Silovs, tight to his post, made the first “huge save” of the game with a snapping glove stop on Samuel Dove-McFalls’ one-timer. The Condors’ forechecking pressure gave the blueline tandem of Noah Juulsen and Guillaume Brisbois plenty of fits.

Dove-McFalls (an incredible hockey name, by the way) was all over the Juulsen/Brisebois tandem throughout the first period. Dove-McFalls had generated two of the period’s most dangerous scoring chances between two shifts.
With less than six minutes remaining in the first, Vinny Arseneau continued his journey toward the AHL equivalent of a Selke Award with a nasty shot-block off the shin.

Undeterred by the Condor’s power play tally, Marc Gatcomb drew a penalty less than one minute later to give the Canucks their first power play of the night.
PP1: Bains, Stevens, Regush, Karlsson, Kalynuk

The second power play unit immediately cut the deficit off the faceoff draw. Channelling the DAWG within him, Tristen Nielsen won the faceoff back to Klimovich, whose shot rebounded to Arseneau for the tap-in goal.
The fourth line nearly even things at two apiece off a beautiful cross-ice pass from Yushiroh Hirano to Juulsen for a tap-in attempt.

Hirano has been a very effective contributor on the Farm’s fourth line in limited action. Through two games, he’s generated some quality looks through very smart passing plays off his forechecking pressure.
The game nearly got spicy when John Stevens uncorked a wrister over the glove of Calvin Pickard.

Unfortunately, the referees deemed that the puck crossed the line after the buzzer.
Canucks’ luck, am I right?
2nd Period
Goal: 2-2 Tie
Carson Focht from Tristen Nielsen and Brady Keeper

After a mad scramble outside the Pickard’s net, the Farm evened things at two apiece off a wicked wrist shot from Carson Focht.
Focht struggled to find a regular roster spot during his sophomore season in Abbotsford, missing 18 games as a healthy scratch, including a brief stint in the ECHL with Kalamazoo. With the Farm’s current depth issues, if Focht can produce at a regular rate, he could finally secure that spot in the regular rotation sooner than later.
During an extracurricular play that would make Steve Mazzagatti proud, Juulsen drew a roughing minor against Bakersfield’s Klim Kostin to give Abbotsford their second power play of the game.

He also went to the box for fighting, which given the video evidence, is an incredible piece of game management by the referees.
The power play generated some solid looks but ultimately failed to break the tie.
After a relatively even period, midway through the second. Tristen Nielsen harnessed the DAWG within him for a one-timer blast on Pickard.

Less than one minute later, the Canucks found themselves on their third power play of the night.
The first power play unit displayed some pretty passing but generated little in the way of shots on goal. The second power play group saw Klimovich uncork a wrister over Calvin Pickard’s head. But, once again, the power play units failed to generate any significant offence.
The Farm then returned to the power play after an incredibly obvious holding penalty from Christian Wolanin.

You have to be a bit more subtle than that, Christian!
PK: Wouters, Lockwood, Juulsen, Brisebois
In a very captainly effort, Wouters won the opening PK faceoff to Brisebois, who immediately dumped the puck to force the Condors outside the d-zone.

Abby’s PK looked quite strong but did need to lean on Silovs for one absolutely massive save on Greg McKegg late into the PK.
Might need some reconsideration from Chris Faber here because Silovs’ DAWG/60 was clearly through the roof after the first two periods!
3rd Period
After exchanging early chances, Hirano accidentally threw a reverse hit into Klimovich behind Calvin Pickard’s net.

Fortunately, Klimovich could skate to the bench unassisted and eventually return to the ice for regular shifts.
More penalty trouble for both teams resulted in a prolonged string of power play exchanges between both teams.
During their first turn on the power play, the Canucks’ struggled to adequately set up inside the offensive zone, generating zero shots on goal.
After their power play attempt, the Condors hemmed in a tired second-power play unit inside the d-zone. The relentless pressure from the Condors led to another penalty taken by the Canucks.

While the hooking penalty was unfortunate, we still applaud Klimovich for his commitment to sticking with Kesselring behind Silovs’ net on the play.
With less than fifteen seconds remaining on their third penalty kill, Chase Wouters put the Canucks’ onto their fourth kill after hauling down Dino Kambeitz.

The Condors were relentless with their pressure on the man-advantage. But the Farm’s penalty killers held their ground, holding the Condors to only two shots on goal.
Bakersfield’s Filip Engaras then took a penalty for tripping, which resulted in more of the same power play struggles from the Canucks.

With three minutes left in the game, Hirano drew a high-sticking minor against Dove-McFalls.

Arshdeep Bains then took a penalty for holding the stick immediately off the faceoff draw.
To say the third period was tedious to watch is a massive understatement.
Though the game was at 4-on-4, the final few minutes of the period felt like a power play for Bakersfield.
Overtime
Starting overtime for Abbotsford were a trio of Nielsen, Stevens, and Kalynuk.

Early into the 3-on-3, Nielsen pulled off a spinorama on his way to the net that would make Wyatt Arndt blush.
Arshdeep Bains nearly won the game for Abbotsford with a great forechecking effort to strip the puck away from Michael Kesselring.

Bains won the board battle and dropped the puck back to Juulsen, who found John Stevens alone in the left circle. Despite fumbling on his backhander, Stevens’ attempt nearly crossed the goal line after taking a fortunate bounce off Kesselring’s stick.
However, despite the goal-line save, Condors netminder Calvin Pickard would go from hero to zero in less than a minute after making the absolutely baffling decision to throw the puck down in front of two Abbotsford skaters.
Goal: 3-2 Abbotsford Canucks
Linus Karlsson [from Calvin Pickard]

The Farm returns next Friday for a road trip to the newly christened Acrisure Arena, where they’ll take on the Seattle Kraken affiliate, the Coachella Valley Firebirds.
News
Recent articles from Cody Severtson