7 young players and serious draft capital: What can the Arizona Coyotes offer the Canucks for Tanner Pearson? 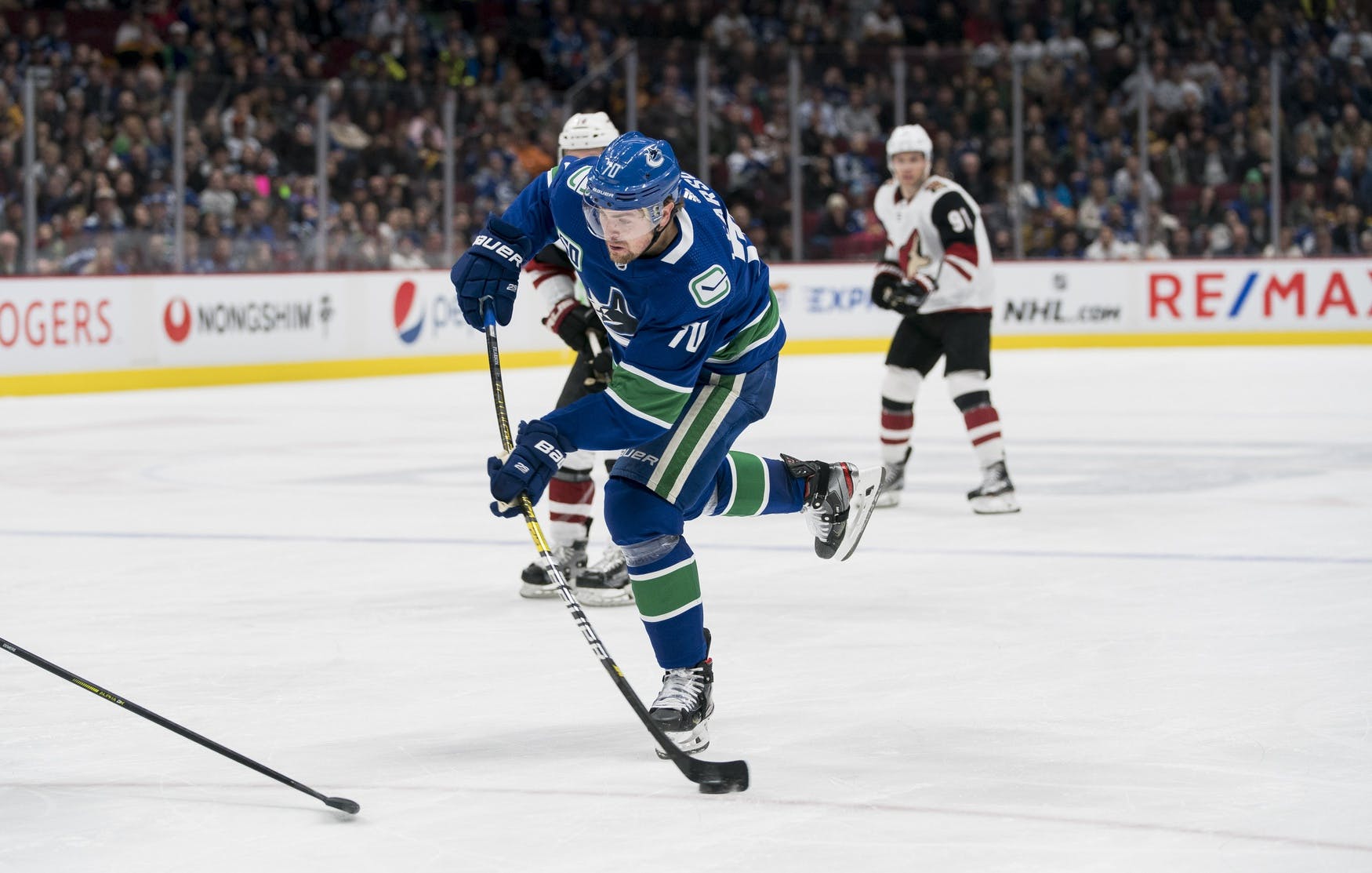 By Stephan Roget
1 year ago
As the Vancouver Canucks have begun to swirl around the bottom of the NHL standings, so too have rumours begun to swirl about various players leaving town. As of this writing, we’re less than six weeks away from the 2021 NHL Trade Deadline, but the reality of international travel and quarantine might mean we’re actually much closer to the bulk of the transactions than that.
In weeks past, we’ve covered the feasibility of Adam Gaudette to Nashville and Jake Virtanen to Anaheim rumours. This week, we’re here to talk about a potential deal that’s much more in line with a traditional deadline “sell” — the trading of pending UFA Tanner Pearson to whichever team is willing to pony up the most in return for him.
According to the latest scuttlebutt, that team might just be the Arizona Coyotes.
Unlike the cases of Gaudette and Virtanen, there are no real complications when it comes to moving Pearson. As a pending UFA that GM Jim Benning and Co. cannot realistically afford to re-sign, there’s nothing to be gained by keeping him past the point at which the team realizes they’re out of the running. If his cap hit proves any sort of issue for the Coyotes, the Canucks can easily retain up to half of his salary. Pearson has no no-trade or no-movement clauses to speak of, so there’s nothing stopping a move.
Really, the selling of Pearson is as simple as putting him on the market and allowing other teams to outbid one another for his services. But if the Arizona Coyotes are really the first potential buyer to throw their proverbial hat in the ring, let’s spend some time going over what they might have to offer.

Why the Coyotes want Pearson

This one isn’t much of a mystery.
The Coyotes find themselves just a couple of points out of a playoff spot. At the same time, their goals-per-game ranks 27th in the league at a paltry 2.57, a rate well below even that of the lowly Canucks.
With more than half of Arizona’s backend on expiring contracts and some important raises to be handed out this offseason, the Coyotes are specifically looking for a player that can add immediate offence without complicating the salary cap beyond this year.
Pearson, for his part, had scored at a roughly 30-goal pace with the Canucks before this season, putting up some of the best numbers in his career. In fact, before his recent dry spell, Pearson had led all Canucks in goal-scoring since his acquisition.
If Pearson goes to Arizona, he immediately jumps onto one of their top two lines, where he’ll complete a top-six that already sports names like Conor Garland, Nick Schmaltz, Clayton Keller, Christian Dvorak, and Phil Kessel.

When it comes to selling at the 2021 Trade Deadline, the Canucks should be exclusively looking for draft picks or young prospects. Fortunately, that’s exactly what the Coyotes would be ready and willing to give up.

We’ve talked about Crouse before when discussing a potential Virtanen-to-Arizona deal, and we remain big fans of the young power forward. The former 11th overall pick enjoyed a long-awaited, though moderate, offensive breakout last season, but this year he’s regressed again and has only notched two assists through 18 games.
While, on the one hand, the last thing the Canucks need is another bottom-six forward, Crouse at least brings a punishing physical element that the Vancouver forward corps lacks, as well as a modicum of untapped scoring potential. Those same elements probably make him someone the Coyotes want to hang on to for a playoff run, but perhaps they can be persuaded to give him a fresh start.

Like Crouse, Fischer is a pick from the 2015 Entry Draft that has yet to pan out. Fischer’s best season came in his first full NHL year, when he put up 33 points through 79 games. His development has gone backward since then, and now he’s sitting on a single assist through 17 games.
While Fischer has the size to play a role in the bottom-six, he lacks the defensive acumen and physicality to constitute much of an improvement there for the Canucks. If they choose to target him, it’ll be in hopes of him still panning out as a top-six option — though that’s starting to look like a longshot.

As an expiring UFA and regular healthy scratch on the wrong side of 25, Lyubushkin doesn’t hold much value. But if the Canucks go into full-fledged sell-mode at the deadline, they’ll also be looking to deal defenders like Jordie Benn and Travis Hamonic. Lyubushkin is an intriguing potential replacement, one who can be auditioned through the remainder of the season and then sent packing if found to be inadequate.
Lyubushkin is interesting because of his habit of throwing bone-rattling checks, and his generally strong underlying numbers. Clearly, he’s in a situation right now where his coach prefers other players, so a new team might yield unexpected results for Lyubushkin.

As we get into prospects territory, Jenik is probably a bridge too far as a possible return for Pearson, but he bears mentioning anyway. Jenik is a third-round pick from 2018 who was putting up more than two points-per-game in the OHL last year before an injury ended his season even earlier than everyone else.
After a brief sojourn overseas to start 2021, he’s now making his professional debut with the Tucson Roadrunners and already has five points in seven games. Renowned for his shot and competitive drive, Jenik is the closest thing the Coyotes have to a prospect with genuine top-six potential without being a true blue-chipper, which makes him more attractive to the Canucks than a simple draft pick. For those same reasons, however, Arizona will be reluctant to move him.

The Coyotes have a couple of right-handed defensive prospects beginning to run out of runway, and Dineen is probably the better of the two. Though his junior offence hasn’t translated to the pro ranks and he’s only of average size, Dineen is a smart and cerebral defender who should be able to hold down a depth role in the near future and perhaps more in the long-term.
At 22 and yet to play a single game for the Coyotes, Dineen is almost certainly available.

Three years out of the draft and in his third NCAA season with his hometown University of Wisconsin, Emberson is admittedly a longshot prospect already. He appears to be a defence-first, and perhaps defence-only, sort of player, even at the college level, and that will limit his opportunities to move further.
That being said, his defensive acumen is strong, and such players do occasionally make it to the big leagues — eventually.

Pettersson’s big brother is in the midst of a late breakout season for the Vaxjo Lakers of the SHL, with 46 points in 45 games. However, the Coyotes only hold his rights until the summer, at which point he becomes an unrestricted agent, so he’s essentially valueless as a trade asset.
The senior Pettersson has reportedly drawn interest from several NHL teams. If the Canucks want to start negotiations early, they could always ask the Coyotes to throw him into a Pearson trade — though they do already have an “in.”

Forget it! Not only is Pearson probably not worth a first-rounder, but the Coyotes don’t even have one, having forfeited it through previous draft-related shenanigans.

Conditional First Round Pick in 2022

The Coyotes do, however, hold two first-round picks in 2022: their own, and Columbus’. Again, this almost certainly exceeds Pearson’s value, but perhaps there is something that could be worked out.
Conditions related to a player re-signing are no longer allowed, but the Canucks could ask for whichever of the Coyotes’ two picks ends up lower in return for a maximally-retained Pearson. That’s probably still too much, but you never know if you don’t ask.

This wouldn’t be the most exciting return available for Pearson, but it’s probably a fair one. Pearson doesn’t have the strong history of production outside of Vancouver to dictate a first round in exchange for his services.
A second is perfectly appropriate.

On the surface, what’s the difference between a second-rounder in 2021 and one in 2022? Nothing, except time.
The Canucks, with their core already in place, should absolutely push for a pick in the current year, so as to expedite the arrival of the player they select with it. 2022 is just too long to wait.

A third-round pick would be a disappointing return for a player of Pearson’s calibre. But if that’s all the Canucks can get for him, it’s still better than nothing. This would be a transaction of last resort.

To help you put together your own trade proposals, we’ve translated each of the assets we’ve mentioned into their numerical value relative to (an unretained) Pearson and charted them. Obviously, any retention to Pearson’s contract adds to his value.
What would you ask from Arizona in return for Tanner Pearson? Chuck a trade proposal in our comments section to let us know!
Uncategorized
Recent articles from Stephan Roget