7 potential players and draft capital: What can the Nashville Predators offer up for Adam Gaudette? 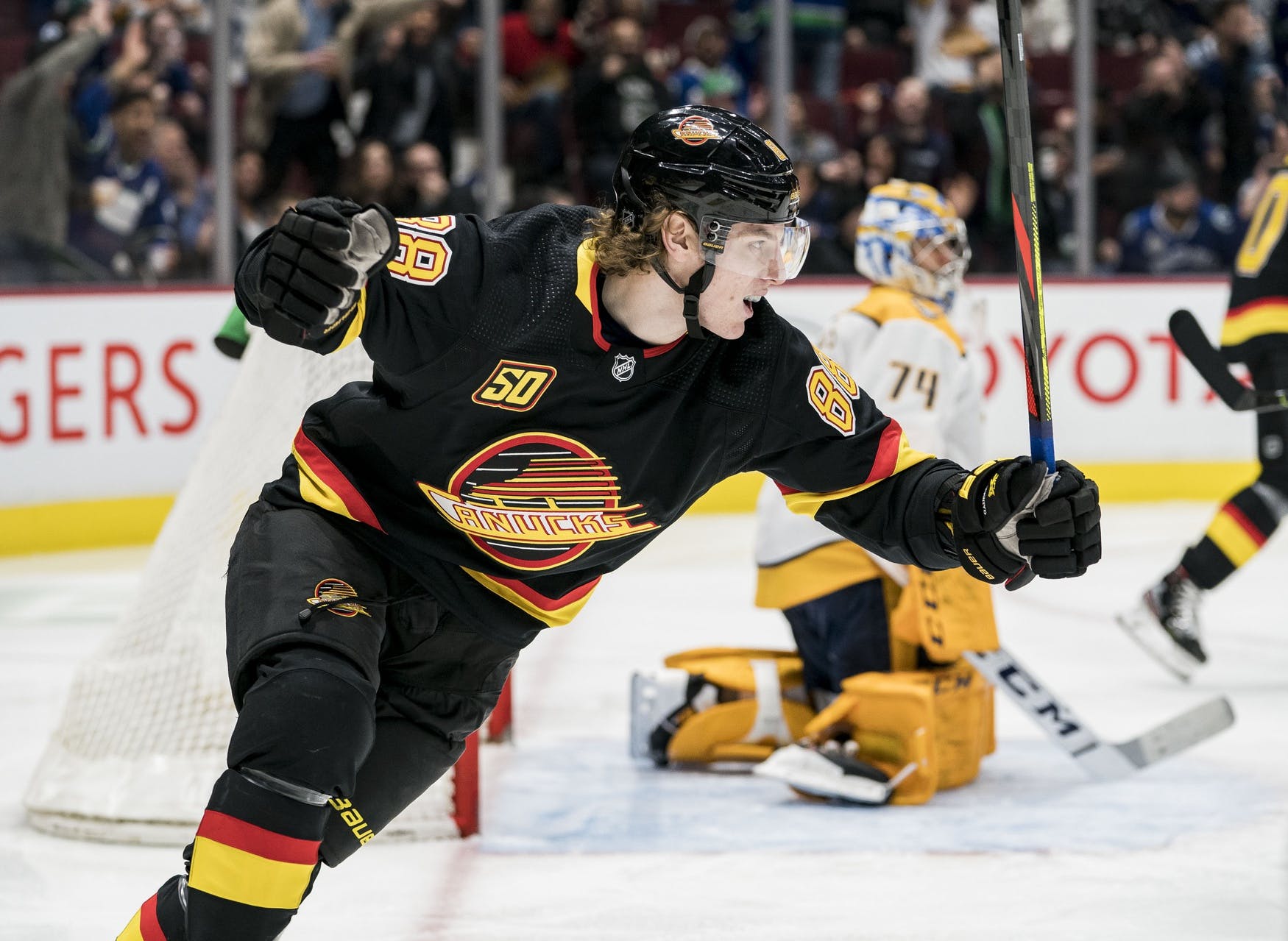 By Stephan Roget
1 year ago
There are so many rumblings coming out of Vancouver these days, you’d think the Juan de Fuca plate had finally slipped. There’s not a cold seat to be had in Rogers Arena, and when we’re not talking about firings, we’re discussing the potential departure of a whole host of players, but mainly Jake Virtanen.
One rumble, however, came from a little out of nowhere, and from about as good a source as one can find in the hockey world.
In his 31 Thoughts column, Elliotte Friedman devoted a whole one-third of a thought to the Nashville Predators and their reported interest in Adam Gaudette. And though they’re only noted as “one of the teams” looking into Gaudette, they’re the only one we know of by name, and the fact that they were deemed worthy of a specific mention almost certainly means that Friedman has heard something specific.
So, we’re going to try to figure out what specifically the Predators might be offering.

We’ve said it before, and we’ll say it again: the Nashville Predators are mired within that dreaded no-man’s land between legitimate contention and the sort of suckitude that leads to a rebuild. As such, they’re not quite “all-in,” but they are actively trying to make their club better in the present day.
Nashville still has a dynamite back-end, but their forward corps are a mess, especially at center where injuries to Ryan Johansen and Brad Richardson have them looking thin. That’s thrust Colton Sissons into a top-line role, and both Michael McCarron — yes, Habs bust Michael McCarron — and some guy named Sean Malone into the nightly lineup.
In other words, the Preds need NHL-quality centers, and that’s still ostensibly what Gaudette is. Sure, he hasn’t managed to stick there in Vancouver, but playing down the middle will be Plan A if Gaudette makes it to Nashville, with a wing assignment still the backup plan.
Right now, he’d step into Nashville’s top-six, before sliding down the depth chart upon Johansen’s return.

The Predators are an organization that always seems to have an abundance of depth, and that leaves them with plenty of tantalizing options for a speculative Gaudette transaction.
And before you even ask, Dante Fabbro is obviously the dream piece here…but it’s more of an “in your dreams” than anything. Same goes for truly top-tier prospects like Philip Tomasino, David Farrance, and Yaroslav Askarov. We’ll instead focus on more realistic targets.

Despite a rough couple of seasons as the team around him has struggled, Sissons has a well-earned reputation as the prototypical checking line center. That semi-expected offensive breakout never came, so he has no place in the top-six, but he’s arguably a better fit at center in the Canucks’ bottom-six than any of Gaudette, Brandon Sutter, or Jay Beagle. And at a cap hit under $3 million, he’s priced right for the job, though the Canucks would have to get creative to fit him in right now.
The term on that contract, however, might be an issue. Sissons is signed for five more seasons after this one, he’s already 27, and long-term commitments to bottom-sixers are generally to be avoided. In any case, it’s probably moot, because Nashville likely values keeping Sissons a lot more than they do acquiring Gaudette. If anything, they want to pick up Gaudette so that Sissons can get back to his rightful spot in the lineup.

Kunin, though a year younger, is a player not at all dissimilar to Gaudette. He played his first full campaign in the NHL last season, and got close to 0.5 PPG status with 31 points in 63 games, before adding two goals in four play-in games against the Canucks.
He’s also bigger, more combative, and more defensively responsible, while presumably holding a little more upward potential than Gaudette. He has plenty of experience on a checking line with Joel Eriksson Ek.
One possible downside is that, like Gaudette, Kunin may be more of a long-term fit at the wing than center, though that’s yet to be fully determined. There’s also the fact that he’s newly-acquired himself, and thus less likely to be moved, and the salary disparity between him and Gaudette.

Cousins a classic pest, the kind the Canucks have lacked in their lineup since Antoine Roussel was forced to change his style. Of late, Cousins has also been far more effective than Roussel, playing all over the lineup on some talented clubs and putting up points, including those same Golden Knights who defeated the Canucks in last year’s playoffs.
He is not, however, one to hold down a checking line all on his own, and that’s something that the Canucks need more than an agitator. We only bring his name up because his healthy scratch was mentioned by Friedman somewhat in conjunction with the Gaudette trade talk — though one has to hope Cousins wouldn’t be the centerpiece.

Trenin turned heads quite literally last season when the rookie forward dropped Zdeno Chara with a hard right, but there’s more to him than fists. Trenin experienced a major breakout at the AHL level in 2019/20 with 20 goals and 35 points in 31 games, and though he’s probably built for the bottom-six, it’s nice to know he can score, too.
He’s yet to develop a reputation as a true shutdown stud, but Trenin’s physicality and north-south tenacity have always had him described as “hard to play against.” The Canucks could always use more of that — beating up the Charas of the world is just gravy.

Like Trenin, Olivier has hit a lot of radars lately through his martial prowess, and in particular his affinity for jiu-jitsu-style blocks. And there’s no denying that chucking knuckles is a big part of Olivier’s game. But he’s also demonstrated enough skill and mastery of the physical side of the game to make him a fine candidate for a long-term energy role in the NHL.
Again, that’s more of a want than a need for the Canucks right now, and their bottom-six is already swimming with options. Olivier could constitute an improvement over some of those players, but not near enough to make him worth Gaudette.

After 36 points in 49 games as a KHL rookie in 2017/18, Tolvanen was one of the most-hyped prospects in hockey. But then he fell flat in three consecutive NHL auditions, and then he failed to produce at the AHL level, and then he went back to the KHL and flopped there, too.
In other words, Tolvanen’s stock has fallen considerably.
Still only 21, however, and still presumably in possession of all that talent, Tolvanen is about as good a reclamation project as one can find right now, and there would be little reason not to give him a crack at the Canucks’ top-six. Nashville could almost certainly be persuaded to move on from him, but they can also just hang on to him until the price is right.
Which raises the question: exactly how interested are they in Gaudette, anyway?

Following years of contention, the Predators don’t have an excess of thrilling prospects, and those they do have are nigh-untouchable. The absolute best that the Canucks could hope for in a Gaudette trade might be Afanasyev, who was drafted 45th overall in 2019 and has put up numbers everywhere he’s played — from the USHL to the OHL to the KHL to the World Juniors.
Even he’s probably a bit much to ask, and so is anyone ranked higher than him on the prospect depth chart.

Gaudette probably isn’t worth a first-round pick at this juncture, and he’s definitely not worth one from a team that is in legitimate danger of missing the playoffs. Nashville almost certainly holds on to this one until they know where it falls.

You might want to get more than a second-rounder for a player who scored 33 points in 59 games last season, but you’ll probably have to settle if you’re talking about a purely pick-based return. Nashville’s second-round pick has the potential to be close to a late first, and could be bang-on for Gaudette’s value.

No matter how you slice it, a third-round pick is simply not enough of a return to justify trading Gaudette. If that’s all the Canucks are offered, they should just keep him.

To help you put together your own trade proposals, we’ve decided to translate each of the assets we’ve mentioned into their numerical value relative to Gaudette and chart them.
What would you ask from Nashville in return for Adam Gaudette? Throw a trade proposal in our comments section to let us know!
Uncategorized
Recent articles from Stephan Roget