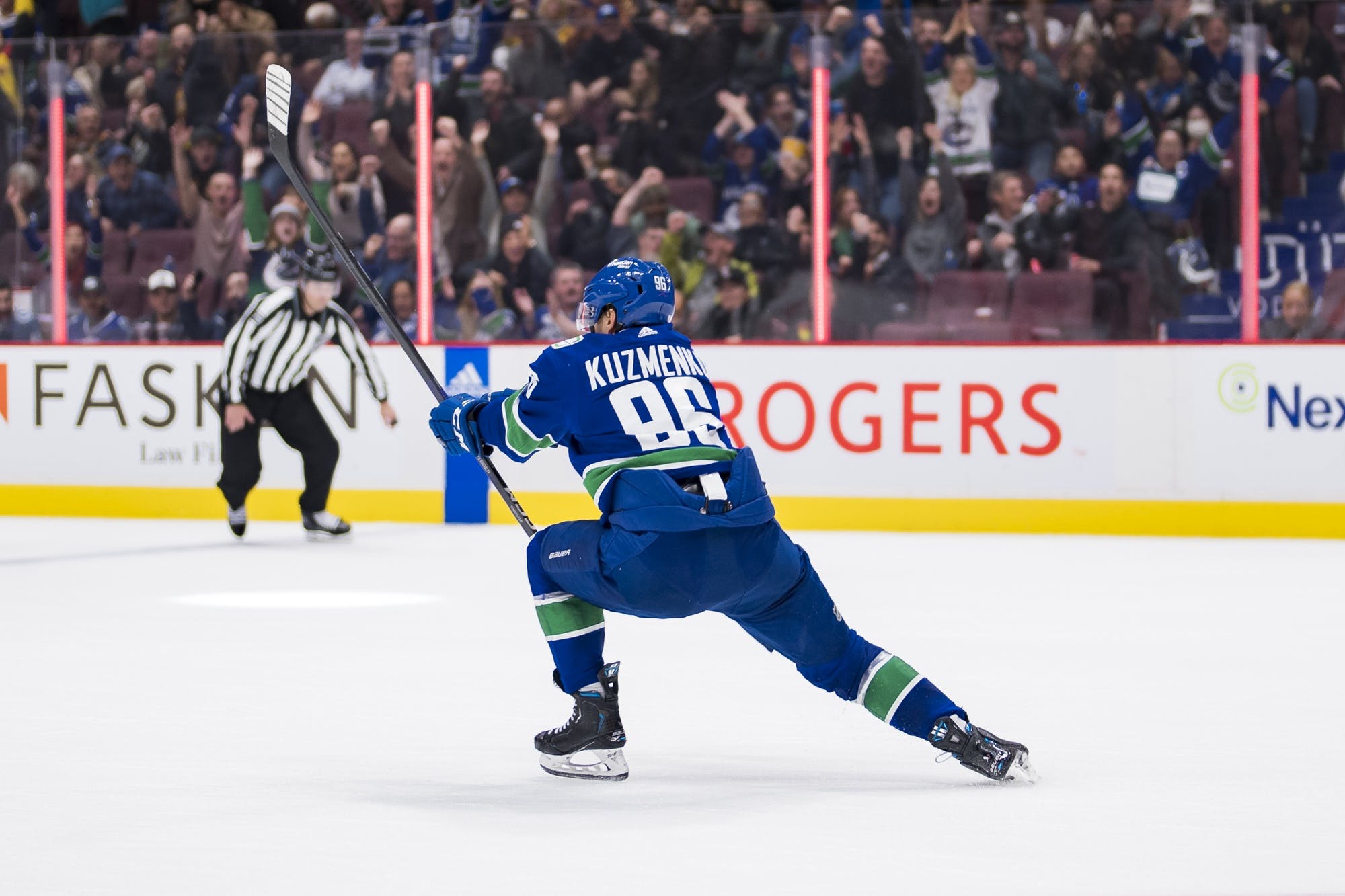 By David Quadrelli
12 days ago
Yesterday, news broke around the hockey world that the Vancouver Canucks’ brass and Andrei Kuzmenko’s agent Dan Milstein met in Florida to talk about a contract extension for the Russian winger.
Additionally, reports circulated that despite there being plenty of teams around the league interested in trading for Kuzmenko and his unique sub-$1 million cap hit, the Canucks indicated to those teams that they would like to keep this player. For now.
From what we gather, contract extension negotiations have been preliminary so far. Numbers have hardly been thrown around by either side, if at all to this point. But those negotiations are going to continue, and one would expect the Canucks would have a good understanding prior to the March 3rd trade deadline as to whether or not they’ll be able to keep Kuzmenko around.
Signing Kuzmenko to a deal that makes sense and has a low-risk factor is critical for the Canucks, who can’t afford any more bad money on their books, both literally and figuratively.
With that in mind, let’s examine some contract comparables for Kuzmenko, listed from “makes the most sense for the Canucks” to “makes a lot of sense for Kuzmenko, maybe not so much for the Canucks.”

Options: 2-3 years @ $6-7 million annually = $12-21 million total money
Comparable: Artemi Panarin
After two 30-goal seasons on his two-year ELC, the Chicago Blackhawks chose to sign Artemi Panarin for two years at a yearly cap hit of $6 million. It’s not a perfect comparable by any means — the deal was signed in 2017, after all — but it speaks to the larger question about sample size and why the Canucks may not want to commit long-term to Kuzmenko. Panarin, of course, went to free agency at the expiration of that contract and cashed in on a 7-year contract worth $81.5 million total with the New York Rangers.
Comparable: Victor Olofsson
And now for a more recent comparable. After potting 20 goals and 29 assists through 72 games last season — his third full season in the NHL — the Buffalo Sabres signed 27-year-old winger Victor Olofsson to a two-year deal with an annual average value of $4.75 million. If Kuzmenko’s production falls off a cliff in the next 40-or-so days, he may sign at this number, but at the time of this writing, Kuzmenko is just four points shy of the point-per-game mark.
If Kuzmenko goes the Panarin route and pots 30 this season and is just a few points off being a point per game player, the annual average value of his extension could very easily rise to $7.5 million over three years (keeping in mind this isn’t 2017 anymore).
We’ll hedge a bet that the truth is somewhere in the middle of these two short-term comparables for scoring wingers, which is how we ultimately landed on 2-3 years at $6 or 7 million for the short-term route. If Kuzmenko and his camp agree to go this route, he’d be betting on himself to set himself up for a similar cash in to the one Artemi Panarin had when he signed long term in New York. Which is why the next option could be more appealing for them.

Options: 4-5 years @ $5-6.5 million = $20-32.5 million
Comparable: Andre Burakovsky
Frank Seravalli penned an excellent column over at Daily Faceoff trying to come up with comps for Kuzmenko’s next contract. One of the comps he used as the “floor” of negotiations is Andre Burakovsky’s 5 year, $5.5 million AAV contract that he signed with the Seattle Kraken this past offseason. And while we may disagree that this is the “floor” contract when it comes to Kuzmenko’s extension, Burakovsky serves as a good comparable nonetheless.
Last season with the Avs, Burakvosky scored a career-high 22 goals and 39 assists through 80 games. Kuzmenko turns 27 in February, so they will be the same age at signing. Kuzmenko is on pace for 74 points this year, meaning a case can certainly be made for Kuzmenko to take a deal similar to this one, if not higher. If he hits unrestricted free agency, you can expect he’ll get offered this — if not more — from at least one NHL team. The Canucks may want it to be them, as a $5.5 million cap hit certainly doesn’t seem that bad for a near point-per-game player.
Everyone wins with this method! Right? Well, not exactly. The Canucks would be thrilled to get Kuzmenko signed at a cap hit south of $6 million, but there’s always the risk of a player’s offence drying up or becoming yet another difficult contract for the Canucks to move when signing anything above four years. Kuzmenko’s small sample size may cause the Canucks to be a bit gun-shy when it comes to this avenue — and rightfully so — but this may very well be what it takes to keep Kuzmenko in Vancouver.
Comparable: Brock Boeser
We know, we know. Brock Boeser only signed with the Canucks for three years this past offseason, not four.
What’s comparable between Boeser and Kuzmenko is their cap hit. After putting up 46 points in 71 games this past offseason, the Canucks decided to give Boeser $6.65 annually. Kuzmenko’s camp is almost certainly going to use this as a comparable, since it was signed just a few months ago by the regime they will be negotiating with.
Kuzmenko is almost certainly going to finish the season with better numbers than Boeser did last year, but let’s not forget that total dollars matter a ton here (hence why we included Boeser as a comparable at all). Boeser’s total contract value is $19.95 million, and a slightly higher figure — $24 million, to be exact — can be achieved for Kuzmenko’s camp by agreeing to a four-year deal at $6 million.
But do the Canucks want to commit three-plus years to another winger at over six million annually? Maybe not, but it could very well be the number that it takes to keep Kuzmenko in Vancouver.

Options: 6-8 years @ $5-6.5 million = $30-52 million
Comparable: Josh Bailey
We’re going to turn back to Seravalli’s column where he listed Josh Bailey as a mid-range comparable for what Kuzmenko’s next deal could be worth. Not necessarily with the Canucks, but what he could command on the open market come July 1st. Bailey’s contract was signed back in 2018, but the process in which the 6 year, $5 million annual average value contract could serve as the comparable here — and again, perhaps a warning for the Canucks.

“Bailey was on-pace for 70-plus points in the middle of his 27-year-old season when Snow jumped the shark and extended Bailey for six years. Only once in the years since has Bailey scored more points than assists he had in that 2017-18 campaign.”

Could he get this type of commitment on the open market? Probably. But the Canucks shouldn’t be looking to make this type of commitment to Kuzmenko after just one season in which they’ve spent the majority of the year wallowing near the bottom of the standings.
Comparable: Valeri Nichuskin
Nichushkin tallied 52 points in 62 games for Colorado last season and was a major driver of offence for the cup-winning Avalanche squad. This past offseason, they signed him to an eight-year deal with an AAV of $6.125 million ($49 million total).
This is the absolute ceiling of a comparable that will likely be used in contract negotiations between Kuzmenko’s camp and the Canucks. He almost certainly couldn’t get this type of dollar amount on the open market because he and Nichuskin are very different players. The only real comparison between the two is that Colorado acted fast to lock up a player off what was really a one-year sample size, as Nichuskin hadn’t broken the 30-point mark since his rookie season with the Dallas Stars back in 2013-14.
Obviously, the more realistic of the two when it comes to Kuzmenko and the Canucks is the Bailey contract. But even then, the only way the Canucks go for this type of long-term deal is if they really believe in Kuzmenko. And hey, having a near point-per-game winger locked up at five or six million after the cap has gone up? That has the potential to be the best contract in hockey! But it also has the potential to be one of the worst within the next 3-4 years. And simply put, that’s a risk the Canucks simply can’t afford to take.

Out of all the options listed, it feels like the deal that makes the most sense for both sides is to go short term. Kuzmenko gets to set himself up for a big pay day if he can prove himself over the course of three or four full NHL seasons, and the Canucks get to minimize their long-term risk while keeping a player they like.
So in the spirit of giving a hot take, we’ll say that if he’s extended in Vancouver, Kuzmenko’s contract will be for two years at $6.5 million.
All salary information courtesy of Puck Pedia.
Editorials
Recent articles from David Quadrelli