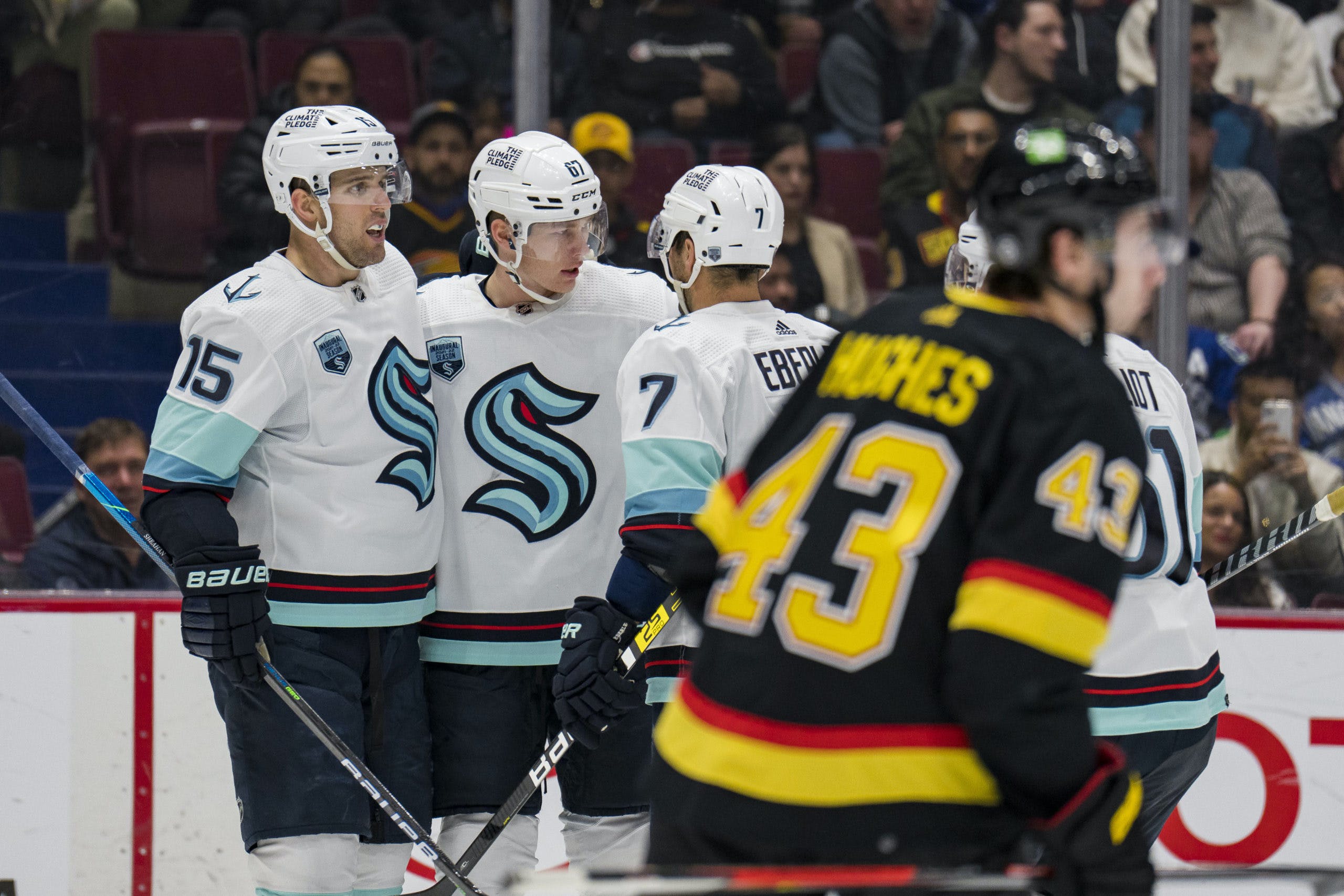 By Bill Huan
5 months ago
Look at the best teams in the NHL, and you’ll find many similarities.
Star power, decent goaltending, and solid depth. That last point is something Canucks fans are wholly unfamiliar with — it might as well be written in a different language.
In order to truly level up, every club needs good depth players that can play specific roles and provide secondary scoring. It’s even better if they can be signed for cheap, which is actually possible, seemingly unbeknownst to the old management team.
And with fourth-liners like Juho Lammikko and Matthew Highmore set to become RFAs this summer and trade rumours surrounding Jason Dickinson, it’s possible that Jim Rutherford and Patrik Allvin decide to go in a different direction if they like other options more.
So, here are a few players who can contribute to the Canucks in a bottom-six role. None fit the profile of the next Michael Bunting, but they can all be signed for dirt cheap (and have most, if not all of their deals buried in the AHL) and hold their own against depth competition.
*All stats reflect five on five numbers (except for points) from the 2021-22 season.

A former Penguin, Simon has ties to Rutherford and can be effective in a sheltered role. He’s had a unique career by becoming a UFA right after his entry-level deal expired since Pittsburgh didn’t qualify him, and has signed a number of league-minimum contracts since.
Simon has shown some offensive pop in the past by scoring 50 points in 135 games between 2018-20, but has bizarrely only put up 13 points in 83 games since. The good news is that Simon’s underlying numbers are very solid, so it’s worth taking a flier on him — especially if he can be signed short-term at roughly the league minimum again. 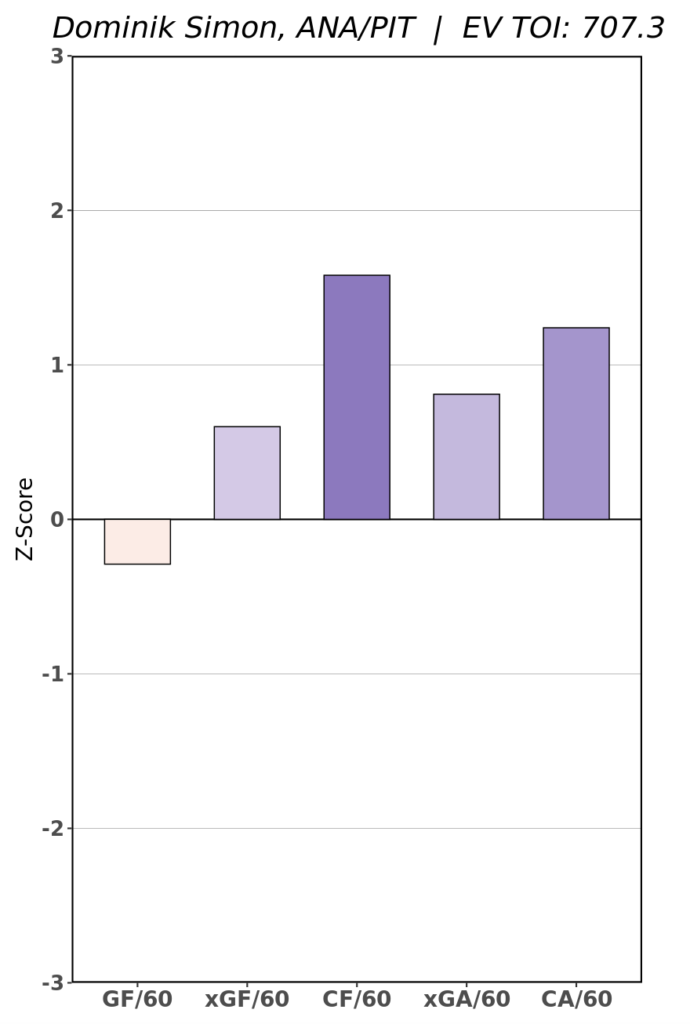 One thing to note, though, is that Simon’s numbers fell off a cliff after being traded to Anaheim. In Pittsburgh, he sported an expected goals percentage of 59.84% at five on five and controlled shots 59.04% of the time, which crashed down to 44.27% and 45.69%, respectively, after joining the Ducks.
Fortunately, outside of his short stint in Calgary, Simon has generally done a decent job of controlling play against soft competition, so we can exercise some cautious optimism that he can do the same when put in the right situations.

One of our personal favourite options, Lazar checks all the boxes. He’s a right-handed centre, is stout defensively, and can play on the penalty kill too. More importantly, the Canucks have been rumoured to be interested in him, making a signing a very real possibility.
Lazar’s 1.82 expected goals against per 60 ranked fifth in the entire league among all players who logged at least 500 minutes of five-on-five ice time… right behind four other Bruins. So, yes, his elite defensive numbers were a product of his environment, but the 27-year-old has been reliable in his own end throughout his career, as he’s never posted a goals-against per 60 or expected goals against per 60 of more than 2.50.
His actual numbers are inferior to his expected impact, but Lazar was still in the 73rd percentile in xGA/60 and there’s reason to believe he was slightly snakebitten; his PDO last year was 0.978 as a result of receiving below-average goaltending relative to the rest of the team, and Lazar’s shooting percentage was lower than expected too.
More importantly, he can be a reliable penalty killer. Again, much of that was a product of Lazar’s environment, but the Canucks aren’t in the position of being picky when they had the 30th ranked PK last year. 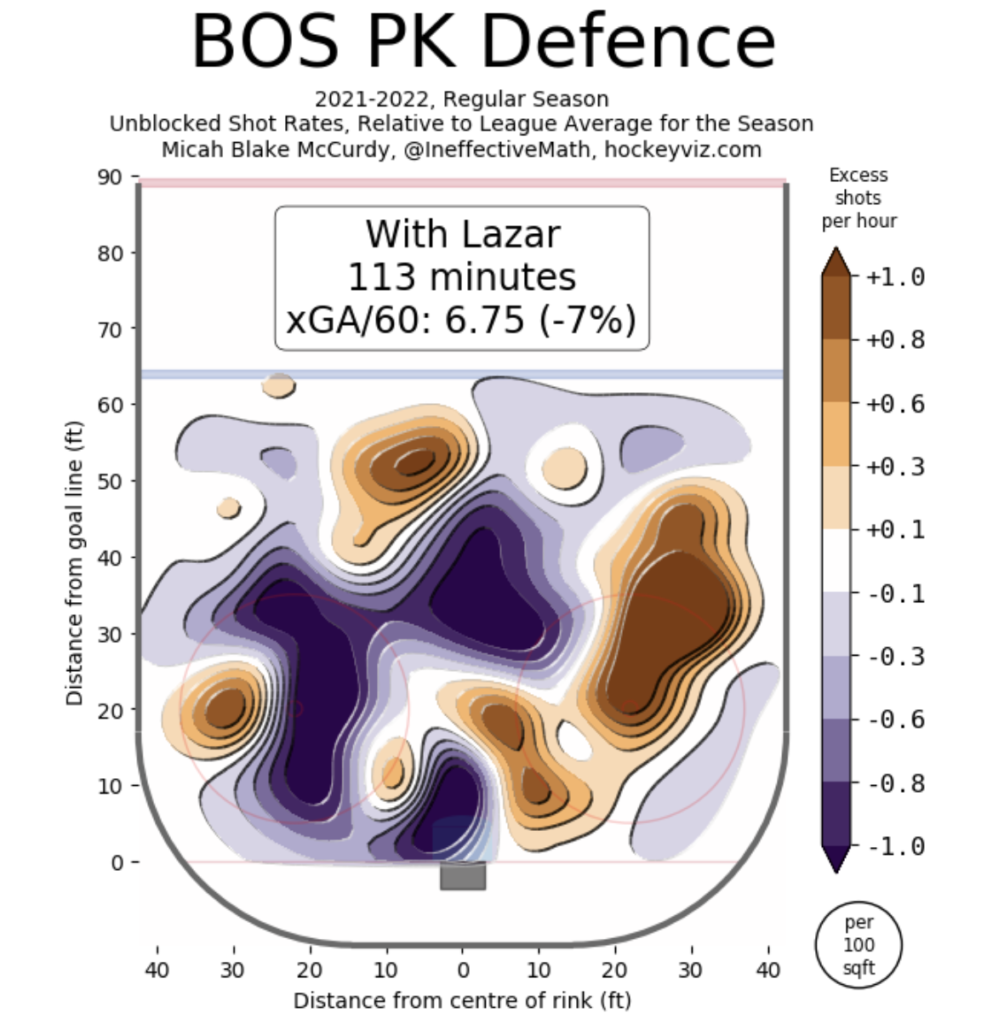 Larsson’s likely to be the most expensive option on this list, but with good reason. He produced at a middle-six rate and faced tougher competition than the other names here, all while holding his own.
With last season being the only time he’s hit the 20-point mark, Larsson might pose a slightly bigger risk if his 2021-22 campaign turns out to be more of a career year rather than a sign of a mini-breakout. That “risk,” though, is still quite muted, since he probably won’t command a deal worth over $2 million.
Furthermore, there’s still a lot to like with Larsson’s production considering the environment he played in. The Swede faced middle-six competition on a putrid Arizona team and put up respectable numbers by posting a 47.62 goals percentage and 48.28 expected goals percentage, and he made a positive impact at both ends of the ice. 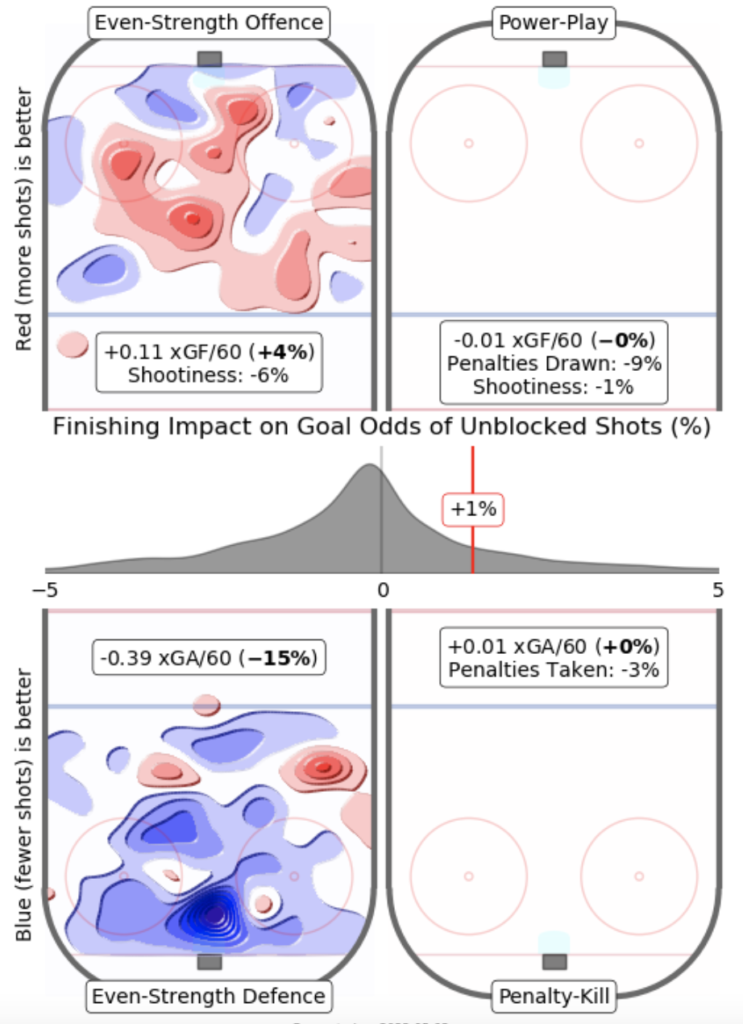 After being traded to Washington, he was relegated to a fourth-line role and had a similar goals percentage, but his expected goals rocketed up to 59.16%. This suggests that Larsson’s able to crush soft minutes at the very least, and has some upside of producing further up in the lineup, especially if he’s surrounded by better players.

At 30, Sheahan’s the oldest player on this list and isn’t capable of producing 30+ points anymore, but he’s still a reliable fourth-line centre. Sheahan performed decently on a horrid Seattle team by playing relatively low-event hockey and posting break-even results, which is better than anything the Canucks have had for the better part of a decade.
On top of that, he is an extremely disciplined player who rarely takes penalties. He only took one minor penalty and drew 10 last year, and according to player cards made by JFresh, Sheahan ranks in the 83rd percentile among forwards in his penalties drawn/taken ratio. 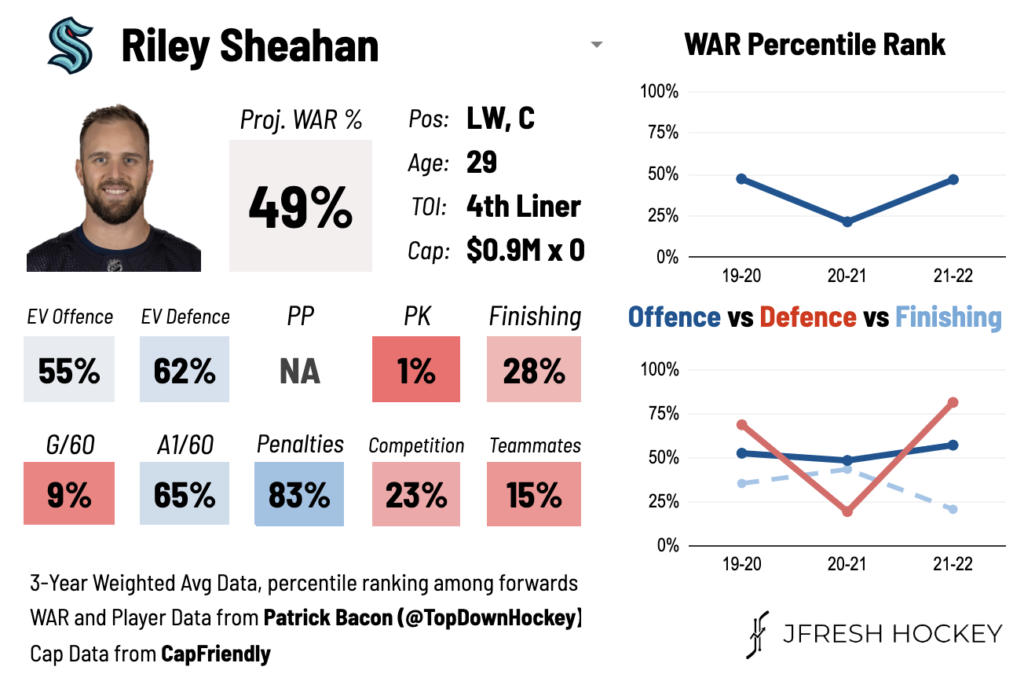 The main downside is that Sheahan is an absolutely putrid penalty killer. Seattle let in almost an entire expected goal more on the PK with him playing per 60 minutes (8.38 xGA/60 with vs 7.42 without), making it all the more bizarre that he was on the ice for over 40% of the Kraken’s total time while shorthanded (the Dave Hakstol Special!).
Still, that one deficiency in Sheahan’s game shouldn’t give the Canucks too much pause, since he could be had at roughly league minimum as well.

Last but not least, we’ve arrived at the wildcard option. Mamin is basically the exact opposite of the other four players given that he’s an offensively-minded player who struggles without the puck. His raw numbers might not be too indicative of that, but Mamin’s underlying defensive metrics are almost worthy of an NSFW tag. 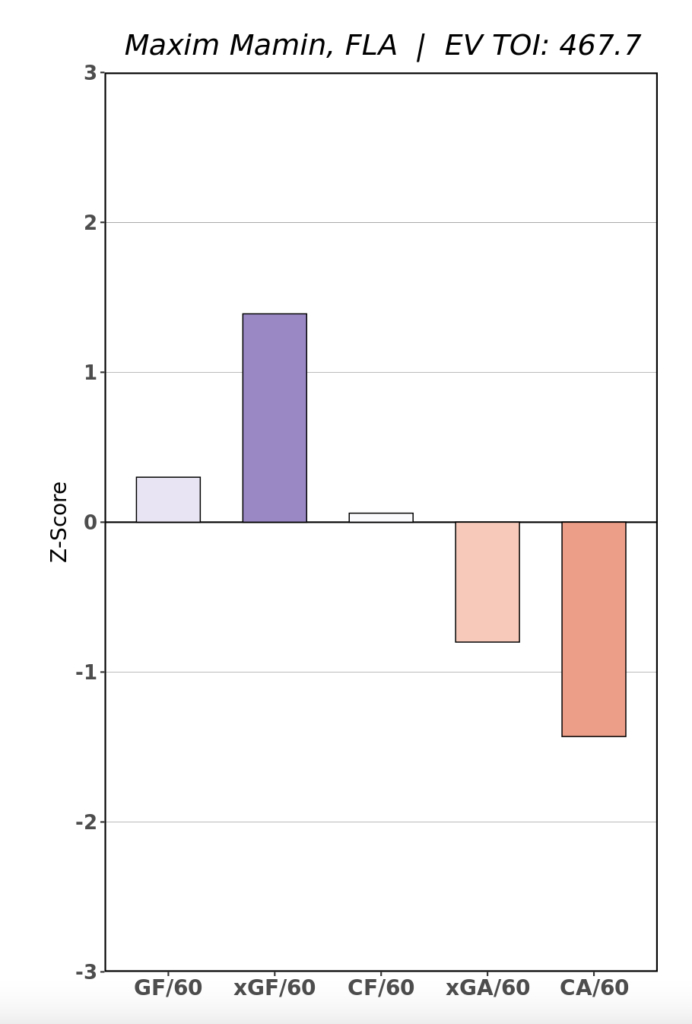 So, why should the Canucks be interested? Well, as you can see on the chart, Mamin’s very good at producing scoring chances, and his 3.50 expected goals per 60 was eighth in the league among all players who logged at least 450 minutes of five-on-five ice-time. That Mamin didn’t even hit the often used 500 time-on-ice cutoff is particularly noteworthy, as it indicates that he didn’t fully earn the trust of his team, but there may also still be some untapped potential waiting to be unearthed.
If the Canucks were to sign Mamin along with some of the other players listed, they could be paired together to help make up for the Russian’s defensive warts. In turn, Mamin’s offence might give the team’s bottom-six some extra juice and tilt the goal differential in their favour. He might even be able to log some minutes higher up in the lineup from time to time and boost his production, and if he really hits, management can even maximize his value by flipping him for assets at the trade deadline.
Either way, the team needs to take some fliers on a few players. They won’t all turn out well, but even one or two would be worth the shot, especially considering how cheap most of these forwards can be signed for.
All stats courtesy of JFresh, Evolving-Hockey, HockeyViz, and Natural Stat Trick.