5 Canucks stats from this season that you should know 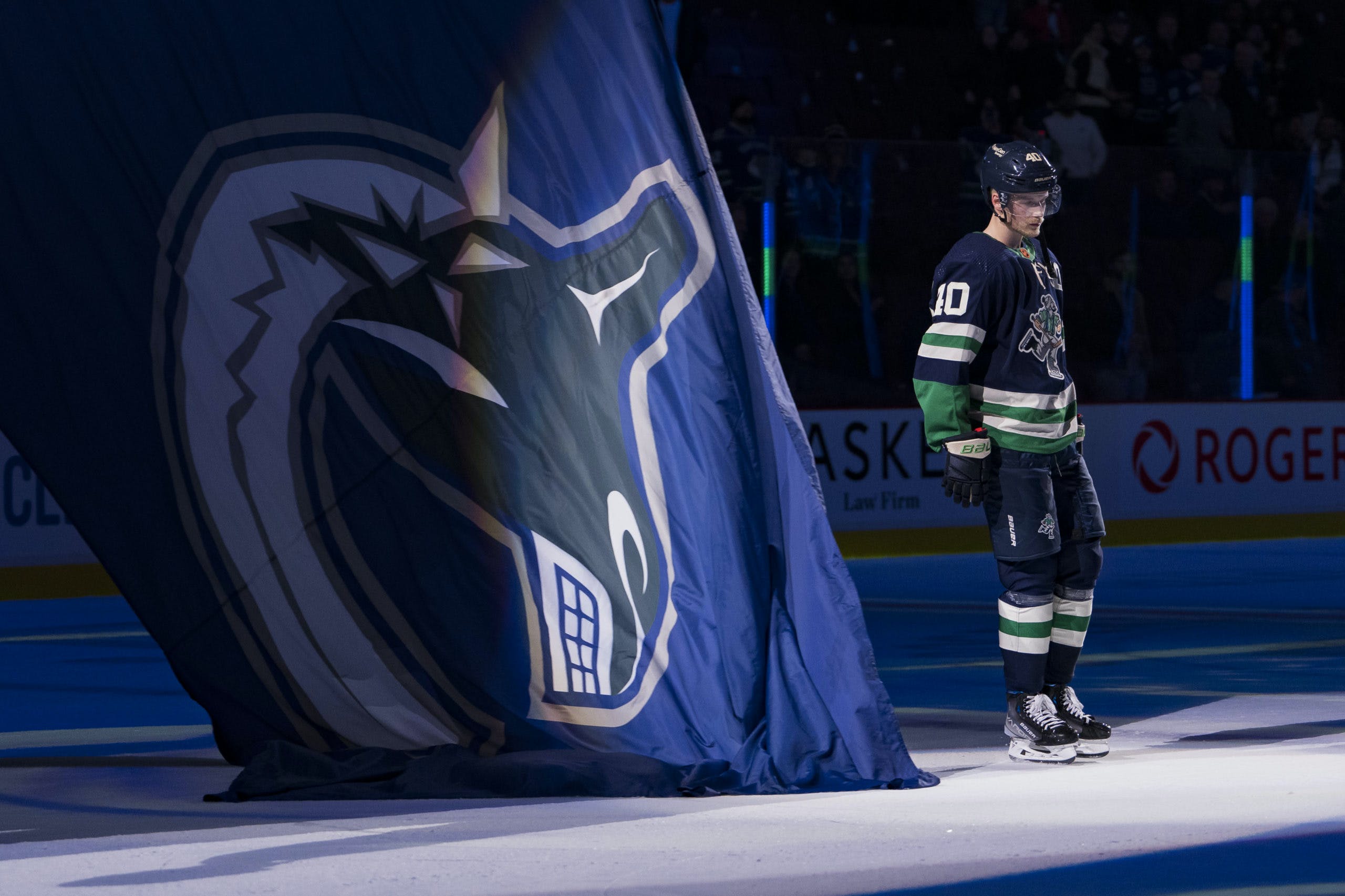 By David Quadrelli
2 months ago
The start of the Vancouver Canucks’ 2022-23 season certainly hasn’t been ideal.
Coming into the year, everyone in and around the organization made it clear that anything short of a playoff berth would be considered a massive failure. The team had even made “unfinished business” their rally cry, before quietly changing it to “our pursuit” across merchandise and on their social media channels.
Like their slogan change would suggest, nobody saw this season starting the way it has for the Canucks.
They’ve struggled to hold leads. They’ve struggled to score when it matters most. Their various defensive issues have had a bright light shone on them due to the team not getting Vezina-calibre goaltending as they did last year when Bruce Boudreau took over behind the bench.
We could go on, but we won’t. Instead, we wanted to point out five stats from the Canucks so far this season. And in the spirit of being as positive as possible, we’ll get the two negative stats out of the way, and then give you the three good news stats after.
First, a stat that may help understand how the Canucks’ have played this year.

Canucks were 31st overall in the NHL standings, but 10th in percentage of time leading at 38.4%

We have to credit Sportsnet Stats for this one, and it’s technically outdated since the Canucks’ 4-1 victory over the LA Kings on Friday night moved them up to 26th overall in the league standings.
This is yet another stat that illustrates just how bad the Canucks have been at holding onto leads. Earlier in the year, they became the first team in NHL history to lose their first three games by blowing multi-goal leads in each.
Then in their fourth game of the season, the Canucks did the same thing. They blew another multi-goal lead and made their record even harder for another team to ever break.

Another thing that’s been pointed out to help explain the Canucks’ struggles is the play of starting goaltender Thatcher Demko.
Demko was a beacon of hope for the Canucks last season. His otherworldly play down the stretch after the Canucks cleaned house had fans — and management, apparently — hoping that he could turn in that level of play over the course of a full season en route to a playoff berth.
That hasn’t happened.
Instead, Demko hasn’t just been un-elite, he’s actually been among the worst in the league according to both advanced stats and traditional save percentage, too.
Before Friday night’s win over the Kings, Demko sat last in victories and second last in save percentage among the 42 goalies with seven or more games played this season. Now, he’s passed Columbus’ Elvis Merzlikins in victories and sits firmly in 41st.
It’s a small step, but it’s something to build off of.
Demko’s struggles are certainly partially due to the fact he’s got a lacklustre defence group in front of him, but some of the blame also has to go on him, for sure. And he would tell you the same thing.

Quinn Hughes is 2nd league-wide in assists and is already tied for 9th in Canucks history for assists by a defenceman.

Quinn Hughes’ season hasn’t been spectacular per se, but the offensive numbers and how much Hughes is creating in the offensive end certainly have been.
In the assists category, Hughes sits just one helper back of Erik Karlsson, who leads all defencemen with 17 assists. Hughes is currently ahead of names like Cale Makar, Adam Fox, and Alex Pietrangelo.
On top of being among the top of the league, Hughes is on pace to shatter the Canucks’ franchise record for assists by a defenceman.
On Friday night, Hughes tallied the 162nd of his career, tying Sami Salo for ninth in Canucks history for all-time assists by a defenceman.
Hughes’ assists per game rate on his career is 0.74, the highest of any defenceman on that list. He’s already halfway to the franchise record held by Alex Edler, and has reached that point in less than a quarter of the number of games it took Edler to set the record.
He’s on pace to break the record by the time he’s played the 420th game of his career.
Expect to see a lot of “Quinn Hughes is the fastest Canucks defenceman to reach ______” a lot over the years ahead.

Bo Horvat is scoring a LOT, but not just this season

There’s a reason we’ve begun calling Bo Horvat “Bogilny” this season.
The Canucks captain is scoring at a ridiculous rate to open the new year, and with 14 goals on the season, he currently sits just two behind Connor McDavid for the league lead.
Horvat’s start in a contract year has been more than impressive, but this goal-scoring touch certainly didn’t just come out of nowhere.
Horvat’s hot streak — if it can even be called a streak at this point — started up on March 9, 2022, with a one goal, one assist performance against the Montreal Canadiens. In the 36 games since — the final 18 last season and the first 18 of this campaign — Horvat has scored an astonishing 28 goals.
We don’t know what Bo Horvat got up to this summer to ensure he picked up right where he left off last season, but we’re going to guess it involved shooting pucks.
Horvat is on pace to score 64 on the season. It’s not Mogilny’s 76 in 77 games back in 1992-93, but it’s certainly closer than anyone would have even imagined Horvat could get close to.
And sure, Horvat is likely to come back down to earth soon and likely won’t finish close to 64, but people have been saying he’d stop scoring at this rate for a while now.
And it still hasn’t happened.

Brock Boeser just had to get one.
After making his 30-goal aspirations well-known right from day one of training camp, the speed bumps began almost immediately.
In fact, they began less than 48 hours after Boeser declared to media that “this was the year” he reached the 30-goal mark in his career. On day three of camp, Boeser suffered a freak hand injury that required surgery to repair.
And just like that, Brock Boeser was once again headed for the injured reserve in a season where all he wanted to do was just get the opportunity to prove who he really is.
On Friday night, Boeser tallied the first two goals of his season. He would later call the performance a huge weight off his shoulders.
It’s true. Boeser returned earlier than originally anticipated from injury and didn’t look like himself in basically every one of the six games he appeared in before heading back to the injured reserve.
In those six games, Boeser tallied just four assists, and didn’t really look like his goal-scoring self.
Since returning, Boeser has tallied two goals and five assists through six games.
The two goals are certainly something to build off of, as is a six-game point streak that seems to have flown under the radar a bit.

Elias Pettersson has been a dominant two-way force, and advanced stats make a good case for him to be in the Hart Trophy conversation

You don’t need advanced stats to tell you that Elias Pettersson has been dominant this season.
On top of scoring nine goals and adding 13 assists through 18 games this season, Pettersson has returned to being a dominant two-way force. He’s been the Canucks’ best penalty-killer by a wide margin, and has been their best defensive forward by those same margins. One CanucksArmy commenter pointed out yesterday that Pettersson may be the Canucks’ best defensive player altogether, and it’s hard to disagree with that statement.
Pettersson’s two-way dominance isn’t just evident with the eye-test. The contextualization of his play using advanced analytics show that Pettersson has been so good that he’s making a case to be in the conversation for the Hart Trophy for league MVP early on this season.
Goals above replacement is a metric that tries to give a total value to represent a player’s contributions to their team.
The model takes into account even-strength offence, even-strength defence, power play offence, shorthanded defence, takeaways, and penalties drawn.
Because of this wide range of stats, the model doesn’t necessarily favour players who don’t defend well or kill penalties. Pettersson is near the top of this list is because he’s rounding out his game and is proving himself as one of the most dominant two-way forces in the league.
“He’s back to playing how he was in the bubble in 2019,” one anonymous league executive — not affiliated with the Canucks — told CanucksArmy. “He’s got to be in consideration for not just the Selke but also the Hart at this point. Consistency has always been the name of the game for him, so let’s see if he can keep this up.”
Let’s see indeed.
Editorials
Recent articles from David Quadrelli