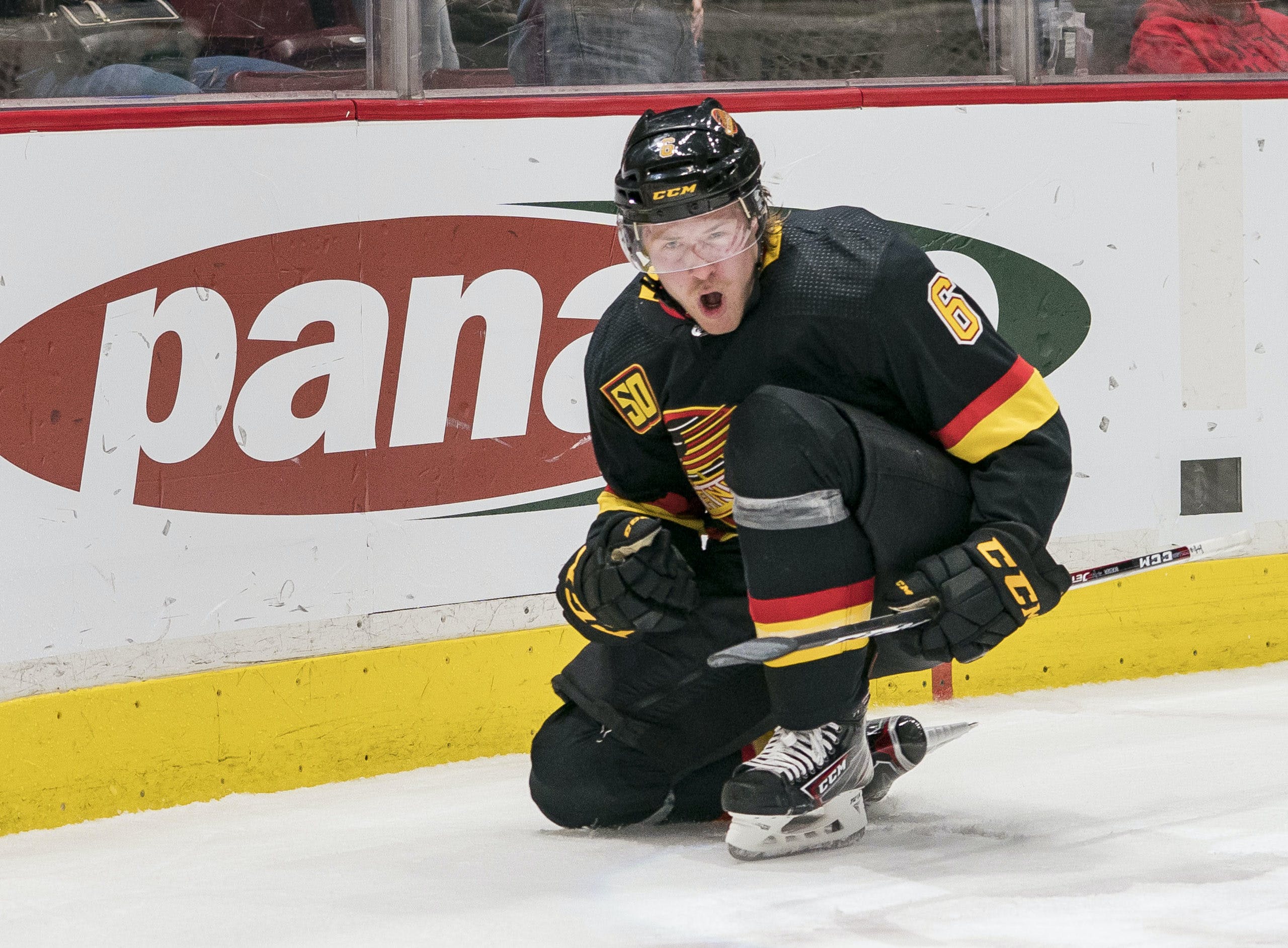 By Cody Severtson
2 months ago
In 2021-22, Brock Boeser churned out a respectable forty-six points over seventy-one games played. Given what we know about the off-ice trauma Boeser and his family endured, is it even fair for anyone to call it a down year? Was his season even that bad? Do fans need to worry?
Now, you’re probably saying to yourself, “Cody, absolutely no Canucks fan blames Brock for last year; they know he will rebound! No one is worrying!” Unfortunately, the internet exists, and there is evidence of folks who live, breathe and believe that Boeser’s 2021-22 performance warrants stern criticism and concern.
Should you encounter such people in the wild, here are a few stats to help you assuage their criticism and concern regarding Boeser’s “down year.”

Boeser finished 6th in team scoring last season after leading the team in 2019-20.

For all of the ink spilled over Boeser’s disappointing season, it’s still worth reminding folks that he still managed to finish sixth in team scoring.
Since joining the Canucks, Boeser has finished first in team scoring twice, in 2017-18 and 2020-21. Until this past season, Boeser had never featured outside of the top-four in 5v5 scoring. Boeser’s other scoring benchmarks include a third-place finish in 2018-19 and another sixth-place finish back in 2019-20.
During the Canucks’ pandemic-shortened season, Boeser was arguably their best skater. He finished the season with 28 points at 5v5, five more than JT miller, six more than Bo Horvat, and double that of Elias Petterson. On the power play, Boeser finished only third in points on but led the team with eight power play goals.
Fans may have forgotten, but Boeser is not far removed from doing everything in his power to buoy one of the worst-performing teams in Canuck history.

Boeser’s production rate was 25th-highest among skaters with 10+ GP over the past five Canuck seasons.

Since Brock’s 2017-18 rookie campaign, 73 Canucks have combined for 135 seasons of more than ten games played. Of those 135 campaigns, Boeser’s down year slots as the 25th-best among them all.

At 0.65 points per game, Boeser tied with Tanner Pearson’s 2018-19 campaign, where he posted 45 points in 69 games played. Boeser has had three of the top ten most productive seasons among Canucks throughout his career. Elias Pettersson figures three times in the top ten, JT Miller three, and Quinn Hughes once. 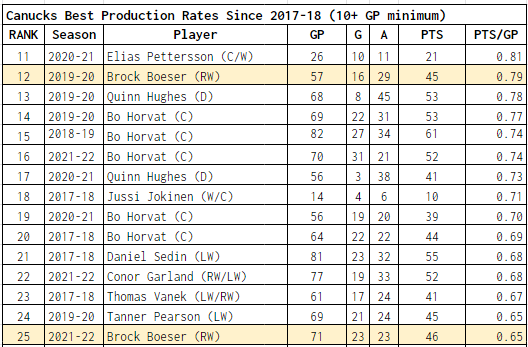 Other than those three, only five other skaters have produced better than Brock’s “down year.”

Boeser generated his highest volume of shots since his rookie season.

Now hang on, how can that be? Do you mean to tell me that despite his dramatically deflated shooting percentages, Boeser had increased the volume of shots taken?
Until last season, not much had changed for Boeser when it came to shooting. For four straight seasons, Boeser’s on-ice shooting percentage at 5v5 stayed relatively the same, while his individual shooting percentage averaged around 13%. Though a significant player for the Canucks’ first power play unit, Boeser frequently earned an average of 57% of his points at 5v5 per season.
Boeser improved his shot rate at 5v5 last season, generating 1.83 shots per game, his highest shot rate since his rookie debut. Despite the increased volume, the puck simply wasn’t going in the net. We know why, now.
So what would Boeser’s season have looked like if his shooting percentage matched his career average of 12.69%? One hundred thirty shots would amount to nearly seventeen goals scored just at 5v5 alone. Eight more than the nine he scored to close out his “down year.”
https://twitter.com/Canucks/status/1569411823350464513?s=20&t=MJEhqzsMECseqwRxrCDfnQ
Brock went through the wringer last year and still put up commendable production in the face of adversity. It would be unwise to write him off. There is a good chance that Boeser returns with a vengeance and returns to the top of the Canucks‘ scoring heap, where he belongs.
Content
Recent articles from Cody Severtson