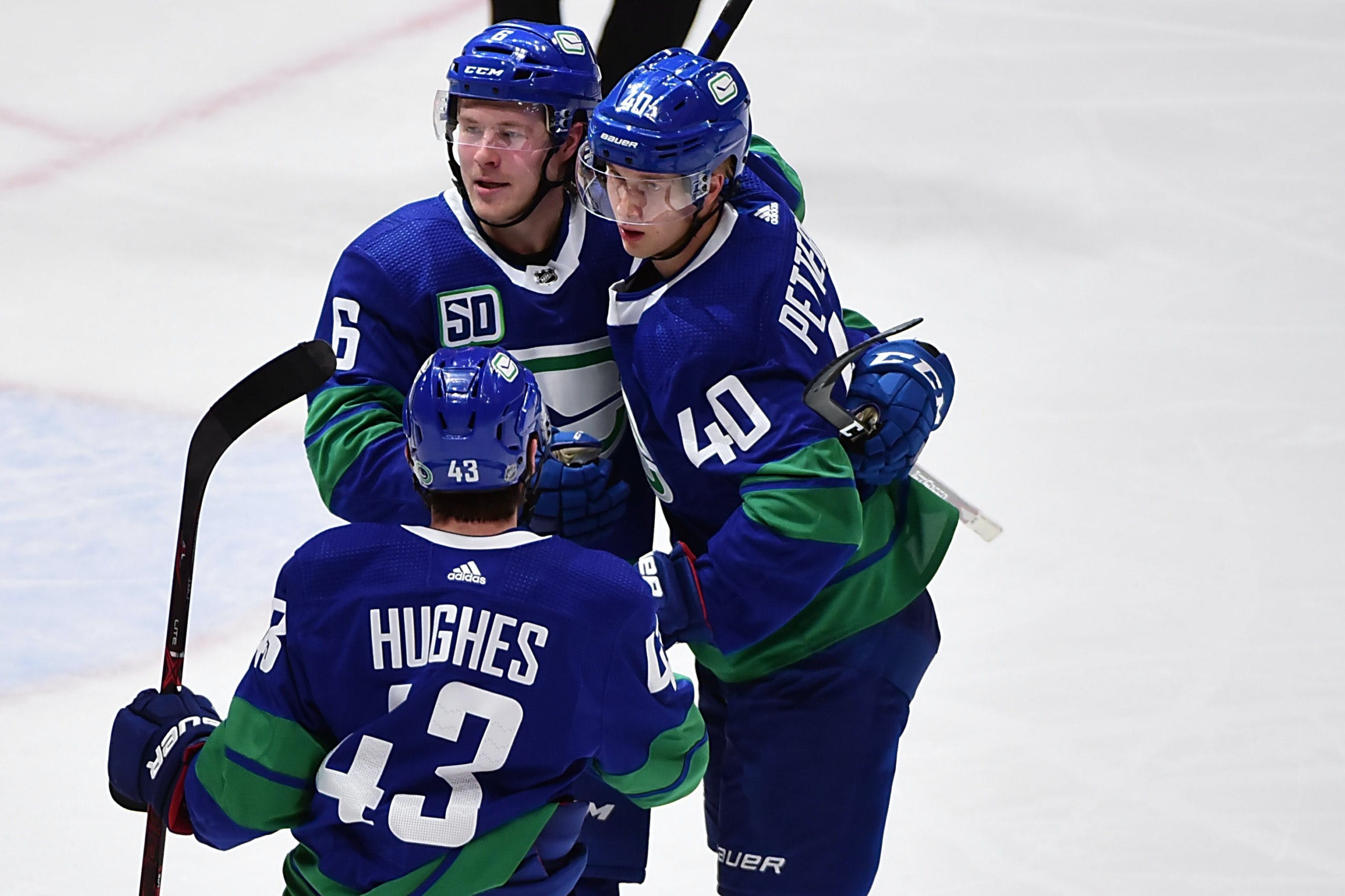 By Faber
1 year ago
The Vancouver Canucks’ power play units will need to improve from last season if they hope to make the playoffs.
Last season, the Canucks finished the year with a 17.42% conversion rate. They scored 27 power play goals on 155 attempts and frankly, that’s just not good enough for the type of talent that they possess.
Since last season, Newell Brown is out and Jason King has been promoted to the bench where he will run the power play. King has experience running the power play in Utica and consistently had it as one of the best units in the AHL.
Not only is there a new power play coach in town but the Canucks have some new names that throw an interesting wrinkle into what we will see on both units. I know I’ve got questions about the Canucks’ power play group and I’m sure you do as well. Save yours for the comments section as I’d love to check out some ideas.
For now, here are a few of my questions about the Canucks’ power play units for the 2021-22 season.

Where does Conor Garland fit? 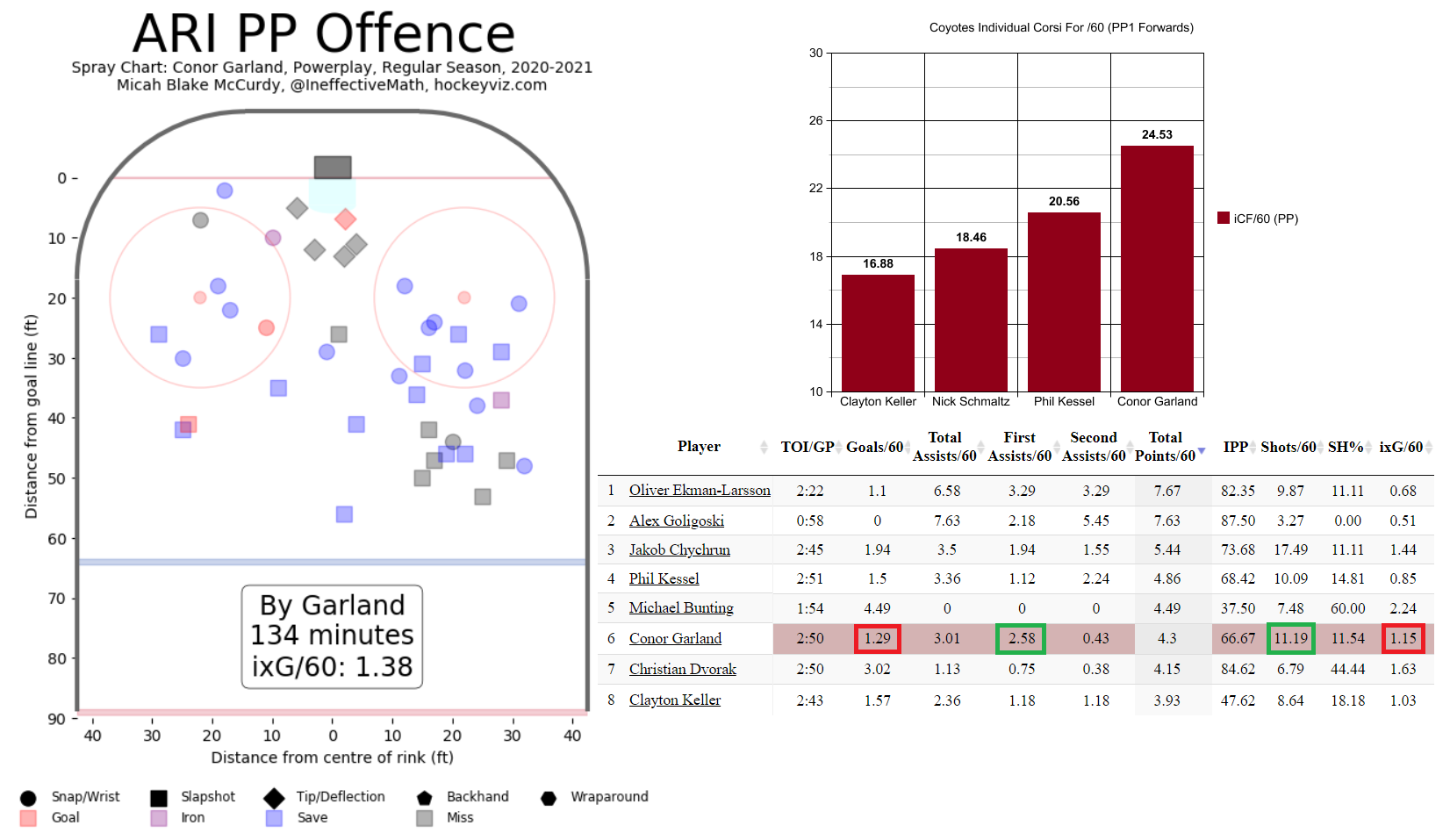 Power play rate stats provided by NaturalStatTrick
This is what the numbers tell us, here’s what the eye test tells us. Garland is a fresh sight for sore eyes on the Coyotes power play. He is constantly moving all around the ice and though he initially sets up on the right side of the ice, you can see in the shot chart above that all three of his power play goals from last season came from when he moved out from that initial starting point on the right side half-wall.
If the Canucks’ projected first unit of J.T. Miller, Elias Pettersson, Brock Boeser, Bo Horvat and Quinn Hughes struggles, Garland’s galvanizing style of attack through movement can provide a jolt to the group. His past numbers don’t make him look like a first unit player but his style of attack and willingness to cut like a UCLA small forward give the Canucks some much-needed movement to a unit that looked stagnant last season.
Here are a few examples of Garland creating offence on the power play from moving his feet or making a great pass.
There will be room for Garland on the second power play unit, and with players like Nils Höglander and Tanner Pearson around him, the second unit will look mighty different with Garland’s presence.
It shouldn’t surprise anyone to see Garland get time on the first unit this season but I’m hoping the Canucks roll with Hughes, Pettersson, Miller, Horvat and Boeser on PP1 out of the gate until they slump a bit.
The Answer (TLDR): Garland likely starts on the second unit but will be the first forward to move up to the first unit.

Which defenceman is best on the second unit and do they need a centre?

With the addition of Oliver Ekman-Larsson and the graduation of Jack Rathbone, the Canucks now have some options on how to work their second power play unit. Last year, Nate Schmidt and Tyler Myers both received time on the unit with Schmidt getting just a bit more time than Myers. The group began the season with one defenceman on PP2 but ended up transitioning to two defencemen after the unit gave up a couple of shorthanded goals.
Next year, it feels like Ekman-Larsson will be the quarterback on the second unit but one of Myers or Rathbone may be added to the group to help defend against shorthanded goals. Rathbone instead of Ekman-Larsson is an interesting option for the Canucks to explore but with the experience that Ekman-Larsson possesses, I’d be shocked to see Rathbone earn the job through training camp.
The unit will likely include Tanner Pearson, Nils Höglander, Conor Garland and then there is a big question mark.
With Miller, Pettersson and Horvat on the first unit, the Canucks are without a centre on the second unit. Neither Brandon Sutter nor Jason Dickinson feels like a good fit as Dickinson and Sutter each played eight minutes of power play time last season. Though the second unit will need a centre, the way I see it playing out is having one of Miller or Horvat take the faceoff and change for Höglander.
In a pinch, if the first unit is tired, you can go with Sutter for the faceoff but I would hope he immediately changes for Höglander. It will be strange to see but the Canucks should value having Höglander on the ice much more than having Sutter.
With that being said, the Canucks have a choice on if they want to use Vasily Podkolzin on the second unit or use a second defenceman in Myers or Rathbone.
This is how I see the second power play unit taking shape. 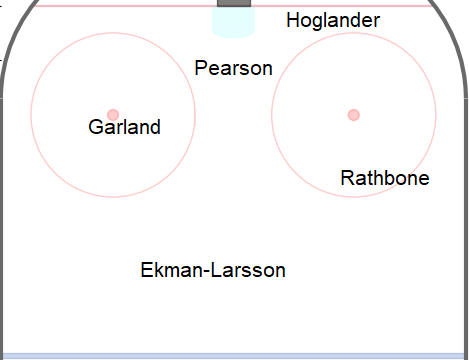 For the best stylistic fit, Rathbone on the right side of the ice makes a ton of sense. He’s got a strong slap shot and can get one-timers off from Ekman-Larsson while also being able to move the puck across the ice to Garland as he shifts around the zone.
Putting Höglander in the corner to use his great hands and playmaking ability while also being quick on to loose pucks gives the unit options for more movement to create passing lanes.
I didn’t expect to see two defencemen on the unit when I came into this part of the article but after trying out a few different scenarios, this one makes the most sense. In the end, Rathbone may end up getting power play time out of camp. Many may want to see Myers as he and Ekman-Larsson can set each other up for one-timers at the point, but Myers is not as effective on the power play as he is in the offensive zone at even strength. 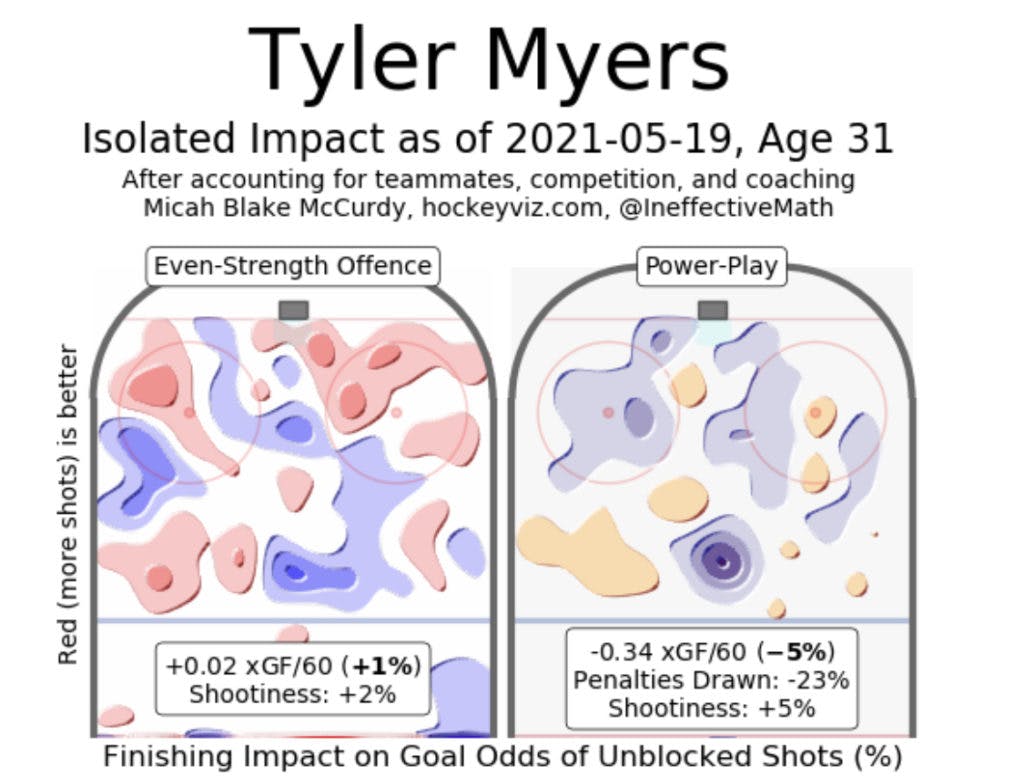 The Answer (TLDR): The Canucks’ second power play unit will likely trot out two defencemen and that’s not a bad thing offensively as Rathbone can play the right half-wall and be effective due to his great one-timer, good vision and high-level playmaking. The Canucks don’t have to use a centre but could have Sutter out if the group needs to take a faceoff.

Will Vasily Podkolzin get any power play time?

There are a ton of questions about Vasily Podkolzin as we head into his rookie season. Many are wondering if he will be a top-six player, a third liner or even start with Brandon Sutter on the fourth line. Another question about Podkolzin is if he will immediately contribute to either of the special teams units.
Podkolzin received limited power play time in the KHL but Podkolzin also received limited time in general during his two-year KHL stint.
He has impressed on the international stage while getting power play time. Even in his limited KHL power play time, his prominent playmaking ability shone through. Podkolzin is at his best when he’s a power play passer. When he is in the corner, he can find passing lanes and instantly create scoring chances. His most consistent place on the power play during his KHL time was as a net-front presence.
He does a pretty good job of screening the goalie but his reaction time to loose pucks in the crease wasn’t excellent. He is better utilized in a spot where he can see the ice and find his teammates for them to have scoring chances. Podkolzin also has experience playing both half-walls and the bumper position. He will see power play time at some point during the season.
With the amount of power play capable forwards that the Canucks have, I’d expect to see Travis Green use Podkolzin as the “next man up” on the power play. I’m more confident that Podkolzin can find time on a shorthanded unit before he can get time on the power play. If the Canucks decide to go with four forwards and one defenceman on each power play unit, there is a chance for Podkolzin to get time with the man-advantage.
A second unit of Pearson, Podkolzin, Höglander, Garland and Ekman-Larsson is possible but I would be very surprised to see Green go with this unit. With Jason King taking over on the power play, it is however, possible. King experimented with a five forward power play unit in Utica and leans towards only having one defenceman on his power play units. The Canucks could start with both units being 4F-1D but if the second unit gets any shorthanded goals against, you know Green is going to be quick to have a conversation with King.
The Answer (TLDR): It’s possible to see Podkolzin on a power play unit to start the season but it’s more likely that he is the next man up when a forward gets injured or struggles offensively.
What’s your biggest question about the Canucks’ power play units? Let me know in the comment section.
Uncategorized
Recent articles from Faber