3 players with something to prove at Vancouver Canucks training camp 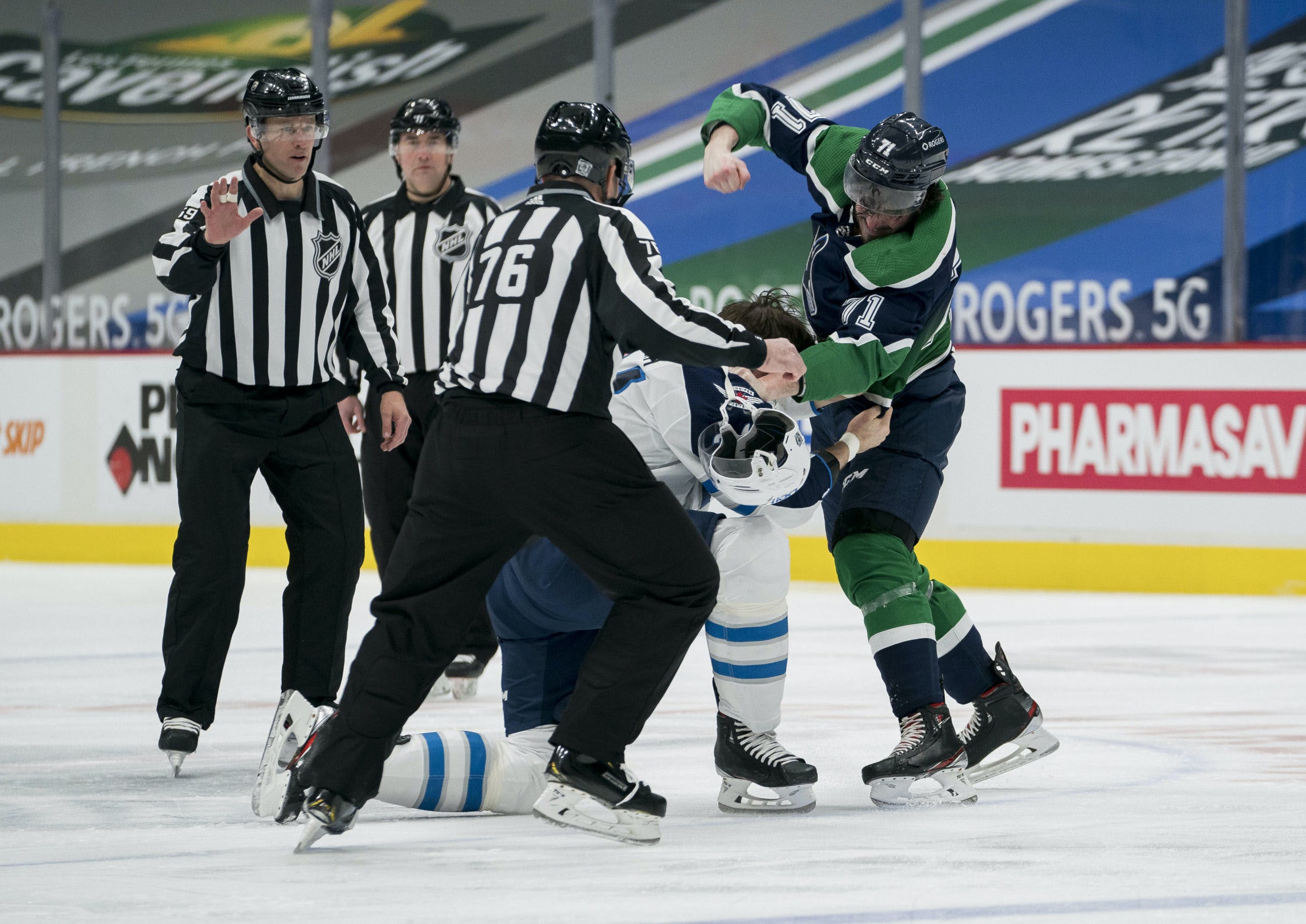 By Faber
1 year ago
Vancouver Canucks training camp kicked off Wednesday with the players facing the media and getting set for the on-ice portion which begins today in Abbotsford.
With Tyler Motte questionable for the beginning of the season due to a surgery for an upper-body injury, the questions surrounding Elias Pettersson and Quinn Hughes’ arrival and a top-six battle, along with it not yet being clear if Brandon Sutter or Bo Horvat will be on the ice today — there are a lot of players who can earn a coveted spot if they have a good training camp.
Today, as training camp is set to begin, we will explore three players who have something to prove at camp.

As camp opens up, all eyes will be on the rookie.
At rookie camp last week, Vasily Podkolzin looked like a man who has two full seasons of KHL hockey under his belt among boys.
“He’s a big boy,” said Brock Boeser with a chuckle when asked about his initial thoughts about Podkolzin. This 20-year-old is build different and will compete to win a spot on Bo Horvat’s wing.
His size and on-ice strengths of being a ferocious forechecker and high-level playmaker will give him a chance to crack the top-six.
I’m confident that Podkolzin is going to shock Canucks fans with his skill.
Honestly, as someone who has watched 90% of his games since he was drafted in 2019, I think he’s even going to shock me.
Nils Höglander took a massive jump when he began playing with NHL calibre linemates.
Podkolzin’s game suggests that he will do the same.
Höglander played on a third line in the SHL with third line calibre players. Podkolzin played with fourth line players in the KHL and though they were probably equal or better than the third line players Höglander played with in the SHL, Podkolzin is in for a similar, massive jump in his linemates’ scoring ability.
Podkolzin’s high-level playmaking skill is finally going to result in goals once he lines up with NHL-calibre players. For that reason, I believe he is going to shock even his closest followers with his NHL offence.
Travis Green has treated rookies differently throughout his time as an NHL coach but you get the feeling that Podkolzin is different. If he shows well enough in camp, there’s a spot for him in the top six.

It’s going to need to be a heck of camp for Jack Rathbone to make the opening night roster. He’s the least experienced out of the three-way race for the final spot on the Canucks’ left defence and that means a lot to how Green selects his defencemen.
Rathbone clearly has the most offensive potential and showed well defensively in his short NHL stint last season.
Tyler Myers had high praise for the rookie in his media availability on Wednesday.
“You could tell pretty quick that Bones is a dynamic player,” said Myers. “The first thing I noticed is that he plays bigger than he is.”
If all goes well for Rathbone at camp, he will likely be starting on a third pairing with Myers when the season begins. We will have to see an adjustment to Myers’ game as Rathbone should be the primary puck-mover on that pairing. This would mean fewer breakouts from Myers and more time spent being the first man back on turnovers. If Myers can’t adjust his game to be more defensively responsible, it opens the door for Olli Juolevi to play a simple stay-at-home role. To no fault of Rathbone, he may lose his spot to a lesser defenceman because of the stylistic fit needed to play with Myers.
This is the tightest battle to follow at camp and should play out through the entire preseason with any of Hunt, Juolevi or Rathbone being able to win the spot in the opening night lineup.

We believe that a fourth line role is Zack MacEwen’s spot to win while also being his spot to lose at this camp.
Does he have the inside track to the opening night lineup?
No, but Green knows that MacEwen can win a spot during a camp. He did it in the playoff bubble and would not be denied a spot in the lineup due to his play.
MacEwen is the toughest player that the Canucks have on their roster. Sorry, Luke Schenn.
To go with his tough hands, MacEwen also has shown soft hands in the past. The big-bodied winger can provide scoring depth to the bottom of a lineup if he fits with the coach’s scheme. That seemed to be a problem last season as he looked to not fully be in sync with Green’s nightly gameplan.
The eye test would suggest that like Jackie Moon in Semi-Pro, there were too many times where MacEwen was going rover. It felt like he dumped the puck in at incorrect times, didn’t do a great job of transitioning from defence to offence, and had some bad giveaways in the neutral zone that led to scoring chances for the opposition.
We’ve seen MacEwen be a very effective fourth line contributor and his physicality cannot be matched on this current Canucks team. He is the type of player that you want on your fourth line if he can buy in to what Green is selling.
From our reports and conversations with MacEwen, he has had a busy offseason preparing to take another step and be faster on the ice. He wasn’t happy with how last season went and once again needs to prove to Green that he is an NHL-caliber player.
Uncategorized
Recent articles from Faber