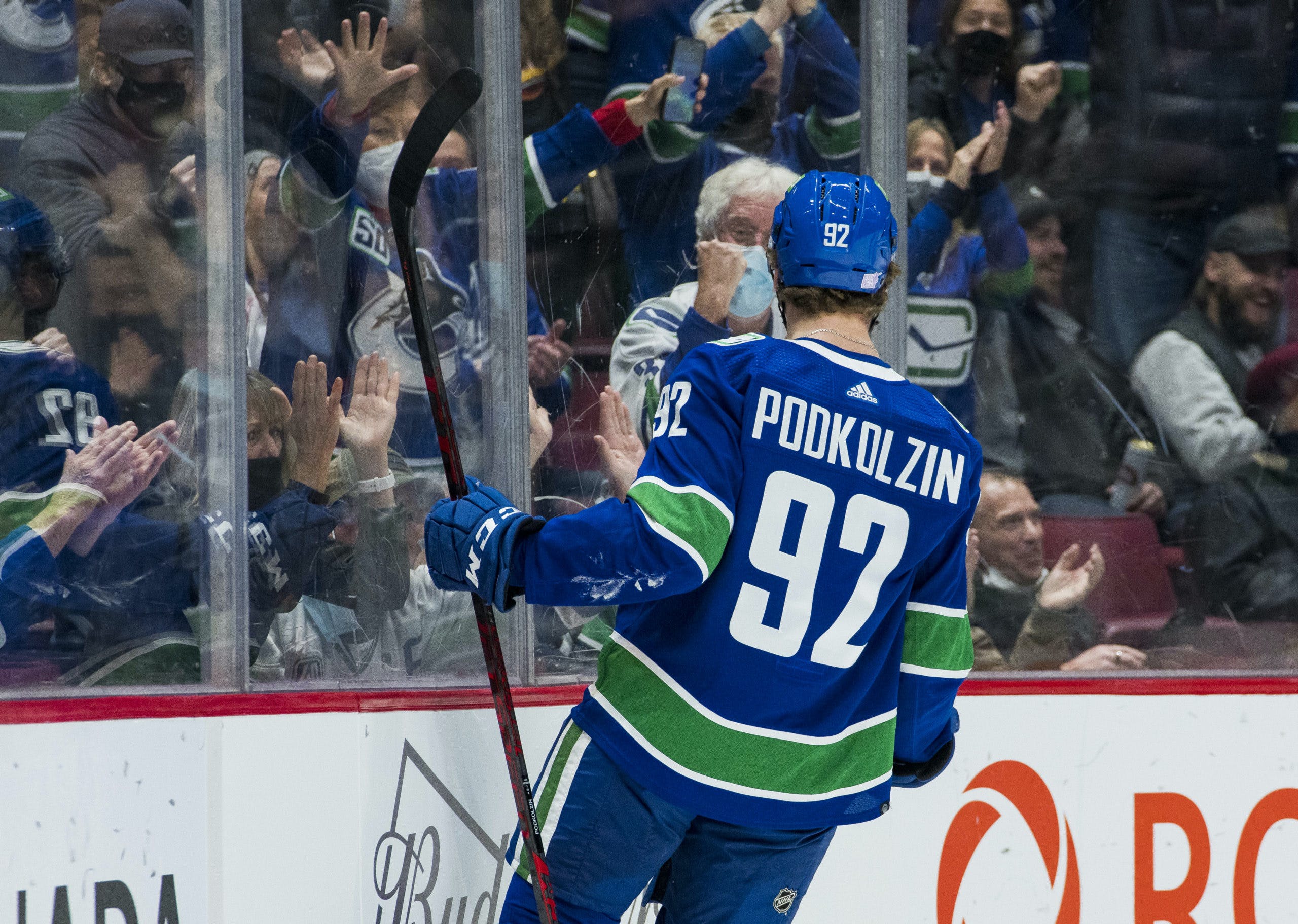 By Bill Huan
1 year ago
It’s not particularly fun to be someone who’s invested in the Canucks right now.
The team has been a train wreck on the ice, but like most things in life, it’s still possible to find bright spots in an otherwise toxic situation.
With the quarter mark of the season fast approaching, there have been a few positive developments indicating that maybe, just maybe, the world isn’t ending — even if it feels like Judgement Day is upon us.

The improvements from Nils Höglander and Vasili Podkolzin

Before the start of the season, I wrote about how Höglander and Podkolzin will be huge X-factors for the team and could greatly alter the construction of the Canucks’ forward group moving forward. Now just 18 games into the season, both youngsters have already impressed and shown that they’re capable of blossoming into legitimate top-six wingers with reliable two-way abilities.
After an eye-opening rookie season, Höglander has continued to develop his all-around game and arguably been the club’s most consistent forward thus far. The 20-year-old is currently the only forward on the Canucks with a positive expected goals percentage at five on five (51.37%) while also generating the most expected goals per 60 (2.6) as well.
Defensively, the Canucks are only allowing 0.81 goals per 60 at five on five with Höglander on the ice, which is the second-best mark on the team. It’s worth noting, however, that the Swede’s expected goals against number is 2.46, and the reason the club’s conceding so few actual goals with him playing is because Thatcher Demko and Jaroslav Halak are saving an unsustainably high 0.975% of shots at even strength with Höglander deployed.
In other words, Höglander’s defensive game isn’t as polished as you might think, and he’s a high-event player who gives up almost as many chances as he creates. Even so, a lot of his defensive breakdowns come from risk-taking and not from recurring in-zone mistakes, as he’s done a good job of defending the crease and is still better than league average in terms of conceding expected goals again. 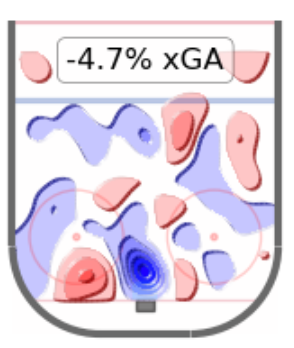 With his hockey IQ and motor, there shouldn’t be any reason why Höglander can’t become a more polished defensive player with added experience, while still a dangerous play-driver on offence.
On the other hand, Podkolzin has proven to be a low-event player, one who doesn’t drive much offence individually but also does a great job of limiting opposing scoring chances. This wasn’t the case at the very beginning of the season, though, when he looked lost on the smaller ice surface and frankly didn’t seem ready for the NHL. A brief glimpse of his numbers since the start of November shows how quickly he has adjusted, especially defensively.
At first glance, it might seem alarming that Podkolzin’s expected goals and expected goals percentage have decreased, but that doesn’t tell the entire story. The young Russian’s game has always been predicated on steady two-way play even if it doesn’t involve tons of offensive dynamism, and it was obvious that the amount of chances he was generating wasn’t going to last.
Over the past two weeks, Podkolzin’s positioning and feel for the game have improved drastically. He’s looking a lot more like the hard-nosed defensively responsible winger that many of us expected, and while the offence isn’t quite there yet, the evolution that the rookie has undergone already is a good sign that he’ll continue to expand his overall game as the season progresses.
Oh, and have I mentioned that neither of them are even old enough to legally drink in the US yet? So yes, Höglander and Podkolzin are well on their way to becoming top-end contributors for the Canucks.

Unsurprisingly, this section needs to explicitly say five on five defence since the penalty kill is so bad that it should be censored from now on.
But if we ignore the team’s horrendous special teams, the Canucks have actually been surprisingly average defensively given the preseason expectations and personnel on the blueline.
So far, the club has conceded 2.49 goals against per 60 at five on five, which ranks 19th in the league. In comparison, the team allowed 2.55 xGA/60 in 2019-20, the most successful season during the Benning regime. Back then, the Canucks still employed reliable defenders like Chris Tanev and Alex Edler alongside a rookie Quinn Hughes who spent most of his time in the offensive zone anyway.
By comparing the defensive heat maps of the two seasons, it’s evident that the Canucks have continued to concede lots of scoring chances, albeit in different ways. 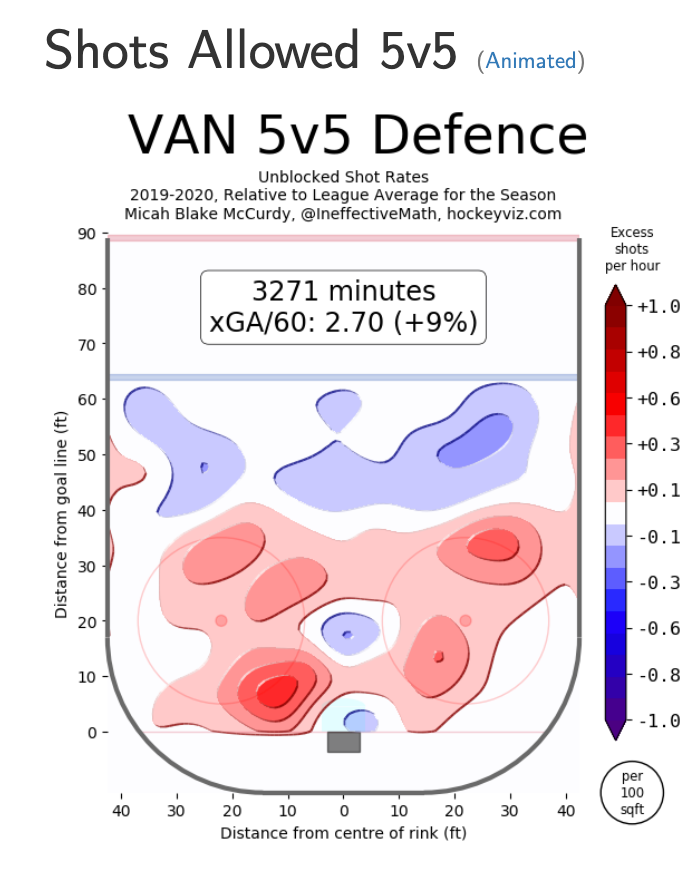 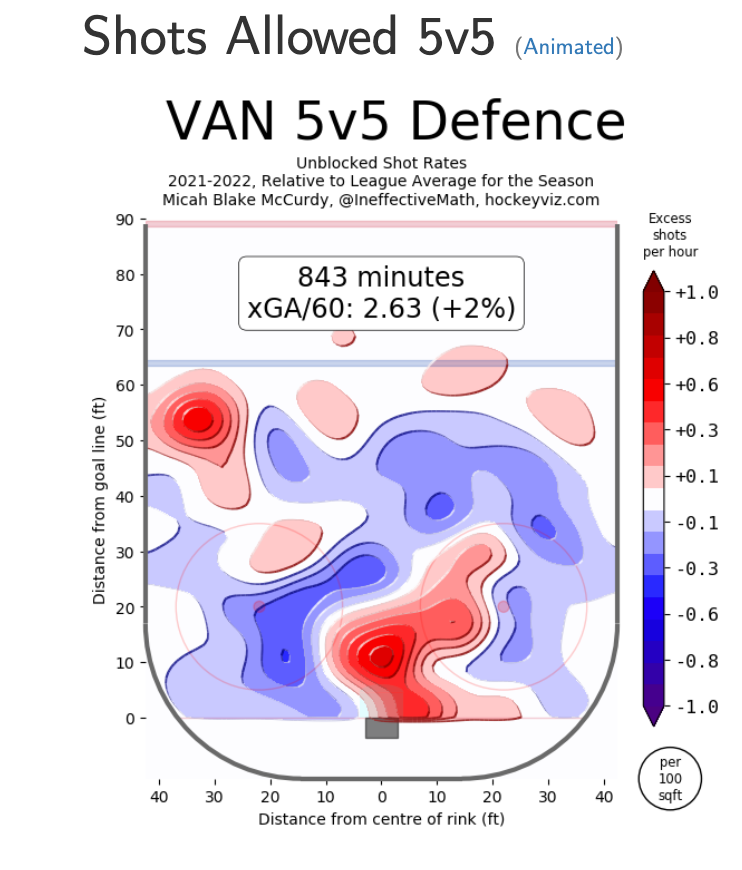 As you can see, the 2019-20 Canucks (first graph) gave up excess shots at the side of the net and around the faceoff dots, while the current team is handing out chances in front of the net like candy. It’s interesting to note that shots coming from the front of the slot are generally the most dangerous and yet the club is still preventing scoring chances better than they were before, which means that the players have done a better job of covering the other portion of their zone.
Returning to this season, the most shocking stat thus far is that the Canucks are actually letting in just 2.03 goals against per 60 at five on five, ranking ninth in the league. Thatcher Demko has unsurprisingly been the main reason for the team overperforming their expected numbers, as the 25-year-old has saved 4.72 goals above expected, good for 11th among all goalies. Jaroslav Halak has been solid as well, saving 1.72 goals above expected in less than 200 minutes played.
Unfortunately, it’s unrealistic to expect the goaltending duo to keep up this level of play. Demko and Halak have helped the Canucks sport a .936 save percentage at five on five this year, which is a higher percentage than any team managed last season.
And that right there is what makes the team’s brutal start so disappointing. The Canucks had a chance to capitalize on a surprisingly competent defence and elite goaltending had their forwards performed up to expectations, but they’ve instead dug a hole so deep that the club will need to play at a 100 point pace just to be within shouting distance of a playoff spot.
But regardless of how the rest of this season plays out, it’s still encouraging to know that the team has two young wingers who are continuing to improve and one of the best goaltending duos in the league.
Stats courtesy of Natural Stat Trick, Evolving-Hockey, and HockeyViz.

BROUGHT TO YOU BY DAILYFACEOFF

Looking to up your fantasy hockey game? DailyFaceoff has the tools you need for both daily and season-long fantasy leagues, including a lineup optimizer, daily projections, and a whole lot more. Sign up for the DailyFaceoff tools here.
Uncategorized
Recent articles from Bill Huan