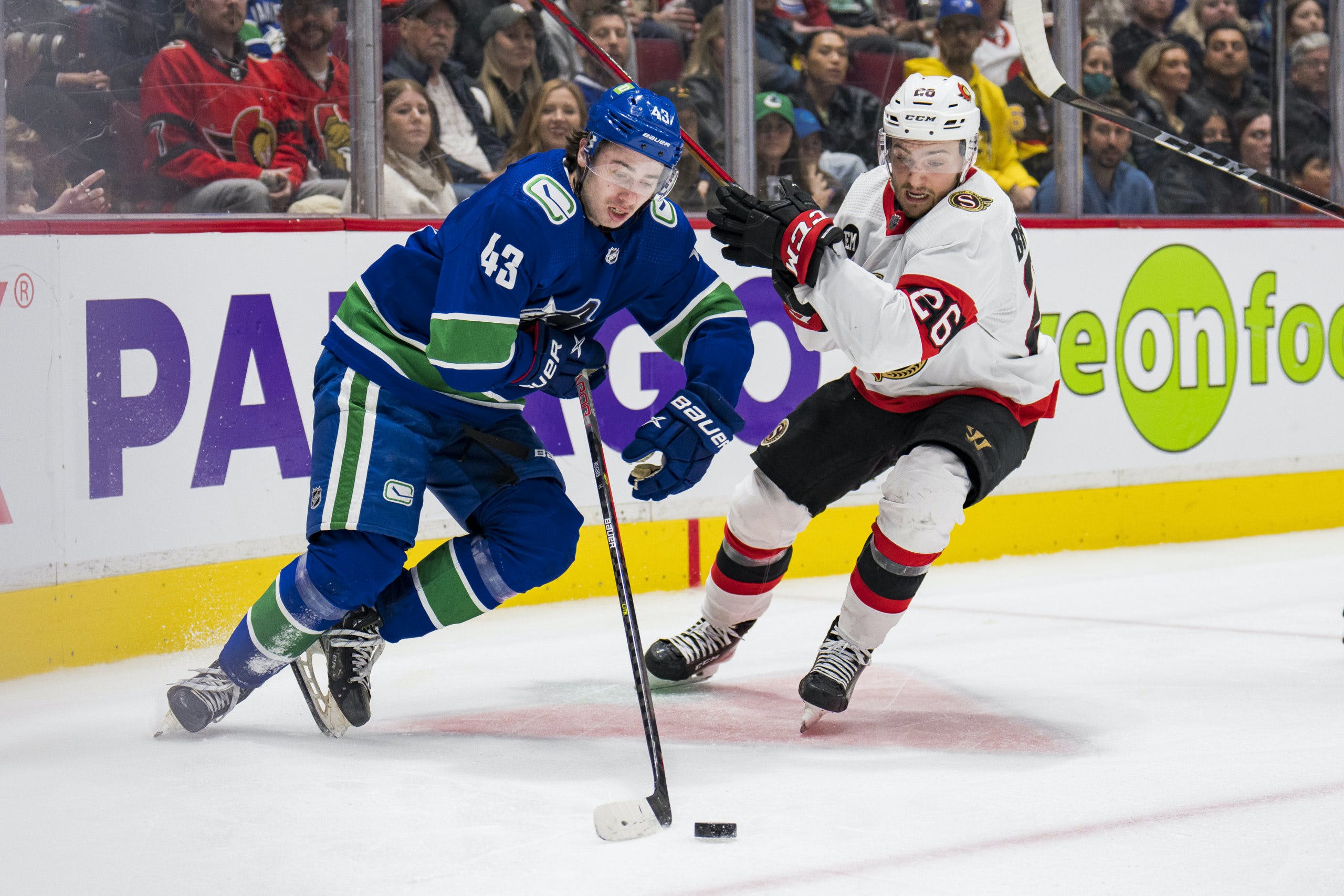 By Faber
6 months ago
With raised expectations, more financial support from their owner, and a clean sheet to win over the fanbase — the Vancouver Canucks’ upper-management group is in a good position to have a productive offseason.
There are roster decisions, personnel decisions, and even real estate decisions as the organization looks to secure a location for a new practice rink. Upper management may be in a bit of a slow period of the year right now but the organization is on the cusp of making massive decisions that will affect the Vancouver Canucks for the next five-to-ten years.
But… in my eyes, there’s one major issue to address this offseason.

Can the Canucks find Quinn Hughes a defence partner?

Quinn Hughes had a great season in 2021-22 and did it while spending 56.3% of his time alongside Luke Schenn. I think I speak for a large majority when I say, ‘I like Luke Schenn’. He was physical, stuck up for his teammates, and fit into the role of Hughes’ partner this past season.
All that being said, the Canucks shouldn’t want to simply look for a defenceman who can play with Hughes. Their goal should be to find a defence partner who actually makes the game easier for Hughes and allows him to reach his full potential sooner than later. Hughes needs a defensively reliable right-shot defenceman who can be trusted to move the puck well as a secondary puck-possessor.
Hughes will always be the primary puck-mover on his pairing. He simply needs a right-shot defenceman who can skate well enough to keep up, play defence at an elite level against top competition, move the puck in a pinch when Hughes is covered, and also should probably be in the age range of 21-26 so that he can play at a high level over the five remaining years on Hughes’ contract.
It’s a tall task to ask of the Canucks’ management team and there are only really a handful or two of defencemen who fit this role.
There’s a reason why John Marino’s name comes up so much in trade rumours. He is the type of defenceman who checks a lot of the boxes to be Hughes’ partner of the future.
Instead of simply making a massive trade for Marino or trying to pry Dante Fabbro out of Nashville — the Canucks may want to target a prospect in a trade or at the draft and trade for a 24 to 30-year-old defenceman who can improve Hughes’ play while also making it easier for the kid to cook.
After crunching the numbers and watching some film, we’ve got a few short-term options who are intriguing due to their defence numbers and how they are sufficient secondary puck-movers.

Connor Clifton is an interesting right-shot defenceman on the Boston Bruins. He didn’t have tough matchups this past season and averaged just over 16 minutes a night of ice time. Though he is only 5’11”, his defensive statistics cause him to have one of the best looking HockeyViz charts in both the defensive zone at 5-on-5 and on the penalty kill. 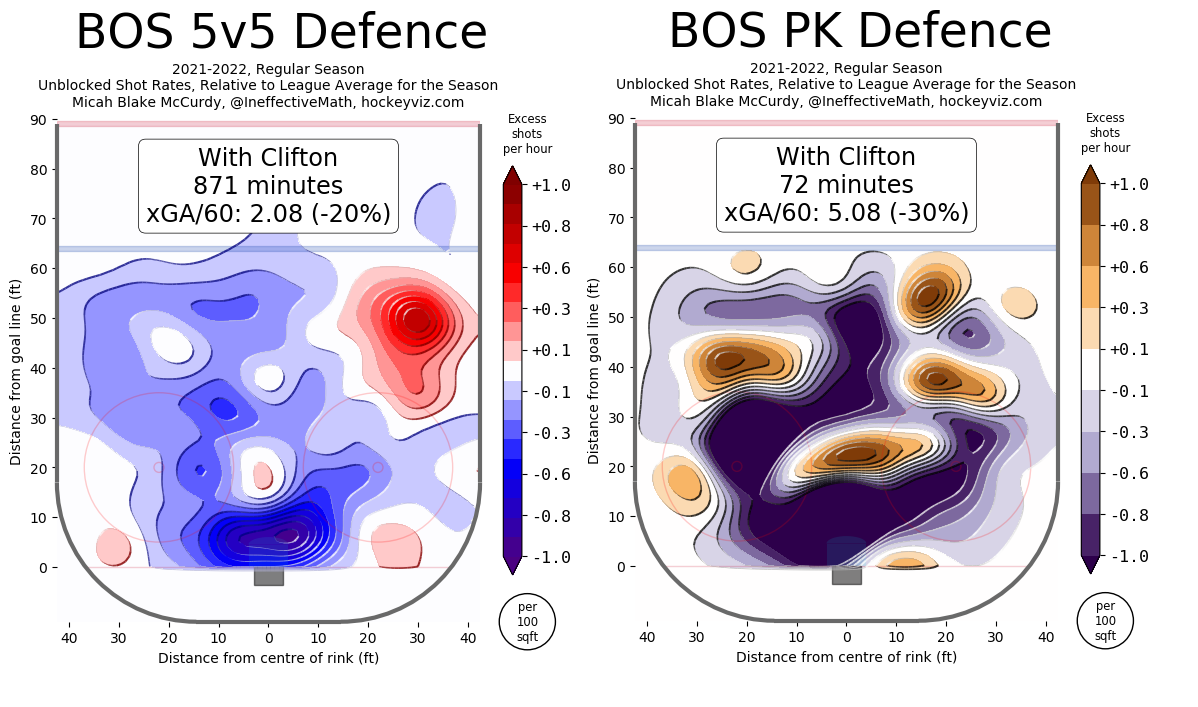 The worry from most will be that Clifton isn’t going to be able to be physical enough at 5’11”. Well, he has proved a lot of people wrong with his aggressiveness in his four NHL seasons.
Clifton turned 27 years old in April, and has one year left with a $1,000,000 cap hit. He was moved down the lineup to the third pairing this season due to the Bruins having other options in their top-four. Clifton is a cheaper option and may not require a massive return to pry from Boston in a trade. He was seventh-best in the NHL last season when it came to expected goals against per 60 minutes.
He may not be the 6’5″ monster that so many want to see paired up with Hughes but he could be a two-to-three-year option that gives the Canucks time to draft for or trade for a prospect that needs some time before getting NHL time.

Though he isn’t the young defenceman who could be Hughes’ long-term partner, Colin Miller would be an upgrade on Schenn and he doesn’t require a trade to acquire. Miller has a strong shot and is trusted in his own zone — even with the Buffalo Sabres.
Miller is coming off a season where he only played 38 games and after some horrid years in Buffalo, will likely be getting as far away from the chicken wings and destroyed tailgate tables as possible in free agency.
Vancouver can definitely offer him a great partner and playing with Hughes would really open up Miller’s biggest strength, which is his shot. Miller earned a lot of hype after firing a 105.5 mph shot at the 2015 AHL All-Star Game. 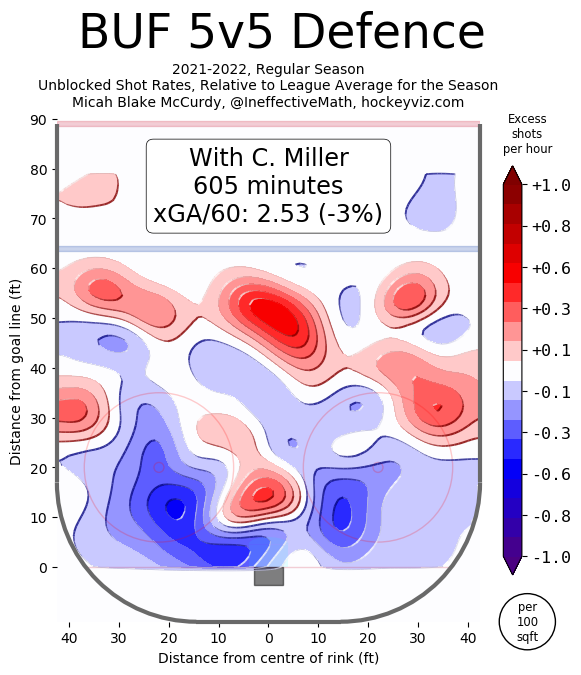 It was a down season for Miller but the chance to play with Hughes and raise his value may be enough to get him to Vancouver on a two-year deal in the realm of $2,750,000 to $4,000,000. If his tremendous shot can open up ice for Hughes it would be great to see the pairing work in the offensive zone. The presence of his shot may also open up even more room for Hughes and that’s also a good thing.
Miller is a free agent option for the Canucks but I’d imagine that there will be a few teams who want to give the 29-year-old a shot to bounce back and be an impact defenceman in their top-four.

One of the sneaky great defensive defencemen last season was Nick Jensen. He’s a bit older than you’d like but could be a strong option for the Canucks to have play with Hughes as they work to develop a right-shot prospect for the role.
Jensen was fourth-best in the NHL when it comes to goals against. He benefited from a .937 save percentage in that time but he was also 33rd best in the NHL when it came to expected goals against at five-on-five last season. Jensen has one year remaining on his contract with a cap hit of $2,500,000.
The Washington Capitals likely feel pretty confident in their right-side of the defence with John Carlson and Trevor van Riemsdyk locked down for next season. Trading for Jensen might be a little boost to the Canucks and perhaps a player like Travis Dermott is a piece that goes back to them.
The ultimate goal should be to get a prospect who can be Hughes’ partner for the final four or five years of his contract. There are many prospects who could be exciting for the Canucks to target after finding a short-term answer to give Hughes a partner who can enhance his game to get to an all-star level.
Some of the right-shot defence prospects we like include Jack Thompson (TBL), Brock Faber (LAK), Helge Grans (LAK) Braden Schneider (NYR), Ethan Samson (PHI), and Scotty Morrow (CAR).
The Canucks also have their first-round pick to play with at this year’s draft and trading down to be able to draft a right-shot defenceman makes a lot of sense while also adding depth to the prospect pool. Honestly, it would make my offseason vibe so much better if the Canucks traded down a handful of spots and then spent their late first-round pick as well as the second-round pick on defencemen — that’s how bad this team needs defence prospects.
This offseason, the goal shouldn’t just be to find one defenceman who can play with Hughes.
An all-out approach to giving your most dynamic player a chance to take his game to the next level and build a pairing that scares the rest of the league for years to come is a lofty goal but is accomplishable because of how good Hughes already is.
The Canucks need to invest assets into surrounding their best players with the best supporting cast. They can start doing that this offseason by bringing in a two-prong setup for Hughes to have a partner now and down the road.
More from CanucksArmy:
Uncategorized
Recent articles from Faber