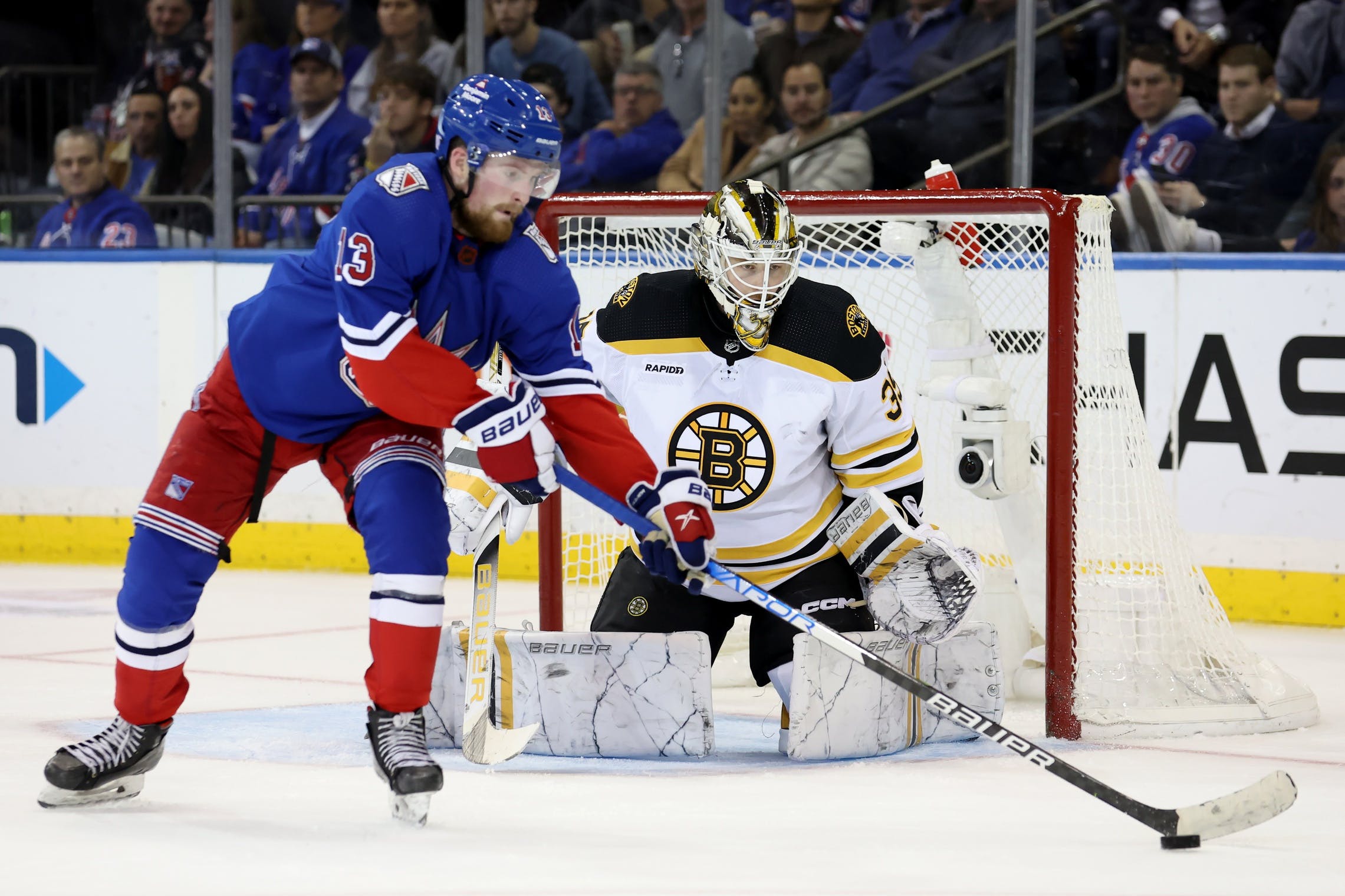 LA Kings, C, 23, 5’11”, 188lb
With decent size, strong defensive awareness, and excellent skating ability, Anderson-Dolan has long had the makings of a 3C at the NHL level. Unfortunately, he’ll probably never get the chance with the Kings, who are absolutely loaded up front. “JAD” looks like the classic case of a quality player squeezed out a rebuilding lineup by younger and more exciting talent, which makes him a prime candidate for a second chance — especially if the Canucks trade one or more centers and find themselves in need of stability down the middle.

Carolina Hurricanes, RHD, 24, 6’2”, 208lb
A throw-in from the Max Pacioretty trade, Coghlan has thus far failed to break into bluelines in Vegas and Carolina — but those are two very difficult bluelines to break into! The BC-born right-hander has size, range, puck-moving ability, and a booming shot, which are all qualities that the current Vancouver blueline lacks. He doesn’t do anything exceptionally well, but does have potential to be an everyday, all-around RHD outside of Carolina, which should be of plenty interest.

Anaheim Ducks, LW, 24, 6’2”, 210lb
Comtois is perhaps best known as the former captain of Team Canada at the WJC, but he’s also been able to make a considerable impact at the NHL level in prior years. The fiery and scrappy winger put up 33 points in 55 games for a middling Ducks team just two seasons ago, and all of that potential must still be in there somewhere. Comtois has quick feet and has shown a willingness to adapt his game to whatever his team needs it to be, which should keep him around in the league as a middle-six winger for years to come. He’s just being forced down the Anaheim depth chart by younger and more talented forwards as their rebuild continues.

LA Kings, RHD, 24, 6’0”, 195lb
Durzi is an interesting one for this list, in that he’s definitely found success in LA post-ELC, and doesn’t really qualify as needing a second “chance.” Following a great rookie campaign, Durzi is both playing and scoring more as a sophomore. He’s an all-around talent, but his game still needs work in a couple of areas, and that’s a problem with so many other high-potential RHDs working their way up the Kings’ depth chart. At some point, they’ll probably have to move Durzi to make room for Brandt Clarke and others of his ilk, and that’s an opportunity for another team to step in.

Nashville Predators, RHD, 24, 6’0”, 189lb
Canucks fans have long had their eye on this mobile RHD from Coquitlam, who at first looked well on his way to becoming yet another properly-developed Nashville D prospect. This year, however, Fabbro has seemed to experience a bit of a developmental setback, and he’s seen both his ice-time and his general responsibility decrease for the Predators. There’s still a lot of upside in Fabbro as a defender who does everything pretty well, and Vancouver might just be the place for him to realize it.

Tampa Bay Lightning, RHD, 24, 6’4”, 227lb
Now, if a young Adam Foote were available, he’d be exactly what the Canucks are looking for. They might have to settle for one of his sons instead. Foote has finally worked his way onto the Tampa Bay roster full-time, but at the same time has also been surpassed by another RHD of the same age in Nicklaus Perbix. That leaves Foote as a likely trade chip when the Lightning make another run at the Cup this season, and they’ve already expressed some interest in Vancouver players. With good speed, enormous size, defensive responsibility, and a developing mean streak, Foote offers a lot that the Canucks don’t have, and could staff their blueline for the foreseeable future.

Seattle Kraken, C, 24, 6’3”, 192lb
We’ve written a bit about Geekie already as a potential target in a Bo Horvat trade, and there’s a lot to like from a player who has bounced around a bit in recent years. Geekie has size, strength, and is a right-handed center, which automatically makes him valuable. He’s been crowded out of a dense Seattle forward corps, and mostly been relegated to fourth line duty this season, but continues to put up decent counting stats and extremely-good underlying analytics. If there’s a Tage Thompson-style breakout candidate out there waiting to be acquired, it might be Geekie.

Nashville Predators, C, 23, 6’3”, 206lb
Canucks fans probably best remember Glass as the guy they’re really glad the team didn’t draft instead of Elias Pettersson. It’s been admittedly a difficult journey to full-time NHL work for Glass, but he’s there now, and the results have been mildly encouraging. With size, skating ability, and two-way talent, Glass is the sort of player who has potential to play a wide range of roles in the big leagues, but injury and lack of opportunity have held him back from putting it all together. A retooling roster might give him that chance.

Pittsburgh Penguins, LHD, 23, 6’2”, 185lb
The smooth-skating Joseph has been linked to the Canucks frequently over the past year, mostly on the merits of being one of the few quality young players in Rutherford and Patrik Allvin’s old system. After years of trying to break onto the Pittsburgh roster, Joseph finally did so this season and is showing well…but he’s also been cleanly surpassed by the newly-acquired Ty Smith, and might find himself back on the outside-looking-in by playoff time. If the Penguins try to make a run this year, he’s one of the few chips worth cashing in, so expect him to be on the move.

Carolina Hurricanes, C, 22, 6’2”, 201lb
Kotkaniemi is an odd duck on this list. After that whole offer sheet debacle, the Hurricanes were practically obligated to sign him long-term, but the former 3OA pick definitely hasn’t earned a $4.82 million cap hit until 2030, and this year has been his worst yet. But that doesn’t mean that Kotkaniemi isn’t still loaded with potential, and his size, skating ability, and playmaking vision haven’t evaporated. He’d be quite the commitment, but he might also have among the highest upside of any player on this list, save the next one.

New York Rangers, LW, 21, 6’2”, 193lb
Okay, we’re cheating a little bit by including Lafrenière here, because he’s technically still on his entry-level contract. That being said, we can all pretty safely say that he already counts as a player who “didn’t work out” on their ELC. We’ve already written plenty about Lafrenière’s situation in New York and what he might add to another franchise via a second chance, and there are few out there who wouldn’t want to see the Canucks at least take a crack at the former 1OA power wing — provided the price was anywhere approaching reasonable.

San Jose Sharks, RHD, 22, 5’11”, 186lb
Merkley is also still on his ELC, but he’s already requested a trade, so he makes the list all the same. There are plenty of things that might scare a team away from Merkley, explaining his inability to crack even a weak San Jose roster, but his talent is undeniable. Right-handed, supremely good at skating, and an exceptional playmaker, Merkley certainly offers plenty that the Canucks don’t have on hand, but he’s a classic “high-risk, high-reward” sort of prospect, probably only worth a flyer if the asking price is quite low.

Calgary Flames, C/RW, 24, 5’7”, 140lb
There are no doubt some of you who scrolled past this entry the second you saw “5’7,” and we get it. Darryl Sutter definitely gets it. Phillips may be small, but he’s developed into one of the top scorers in the AHL and a true driver of player. He’s just never got a real shot in Calgary, and never will so long as Sutter is the coach. Phillips remains a longshot at the NHL level, but you never know, he might just be the next Johnny Gaudreau or Martin St. Louis. And wouldn’t it feel just fantastic to steal such a player from the Flames?

Edmonton Oilers, RW, 24, 6’4”, 201lb
Speaking of youthful talent coming off their ELCs, the lovely Lachlan Irvine has already expounded on the virtues of Puljujarvi, so we won’t belabour any points here. Suffice it to say that Puljujarvi still possesses an intriguing blend of strength, skating ability, and true shutdown capabilities, but hasn’t been able to bring his scoring talent to the NHL level, despite ample time alongside Connor McDavid and Leon Draisaitl. That has many around the league skeptical about his long-term future, but the kind of player that Puljujarvi might still turn into is one that any team, including the Canucks, could use.
Editorials
Recent articles from Stephan Roget