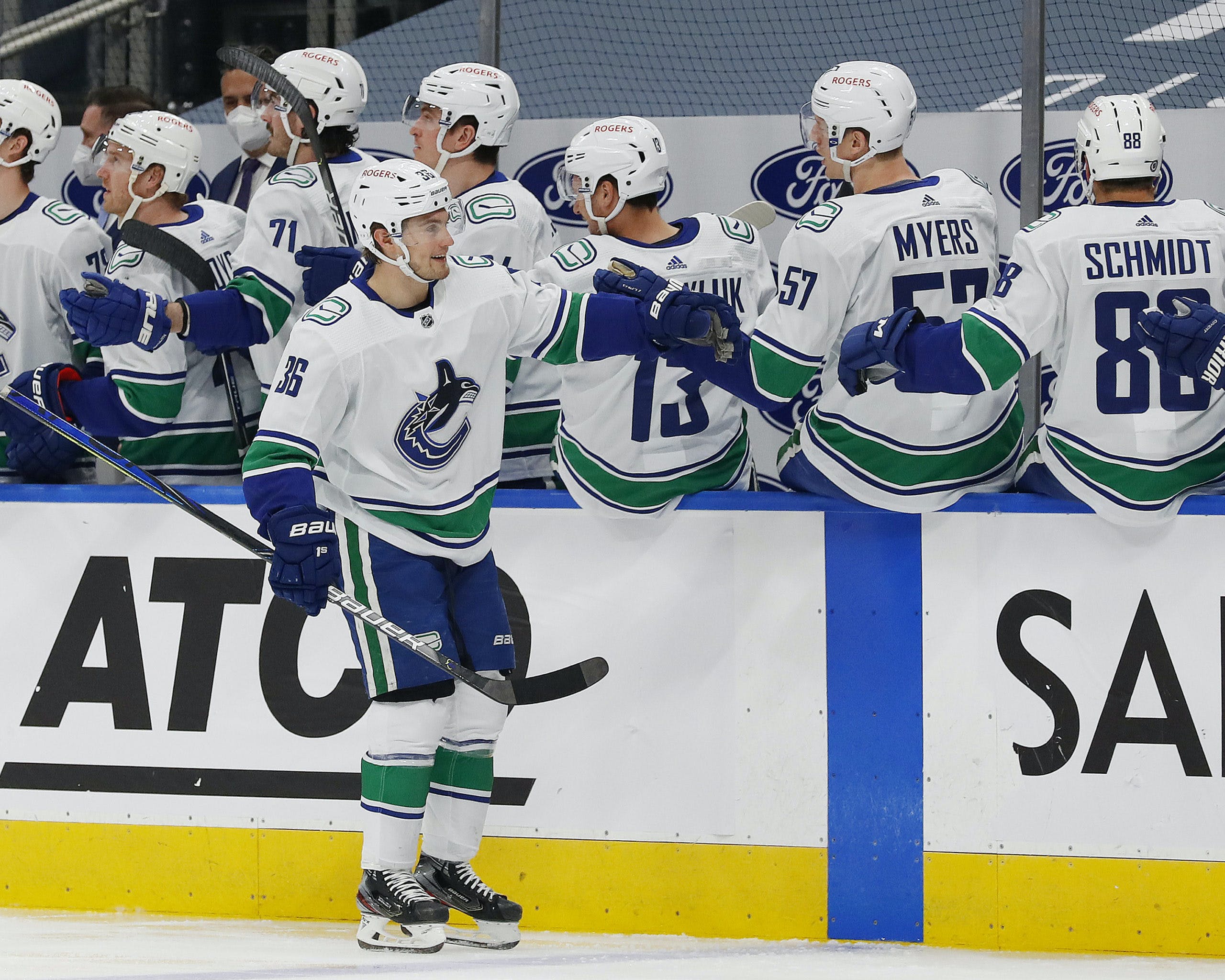 By Faber
1 year ago
With a new season, comes new numbers. So far this offseason, we have seen 12 number changes or additions to the Vancouver Canucks.
Let’s check out those number changes so that you know who’s who with training camp and preseason just around the corner.

These will be players who played for the Canucks last year and will be wearing a different number for the 2021-22 season.

After wearing number 41 in his one and only game during the 2020-21 season, Jonah Gadjovich will be jumping up a digit and wearing number 42 this year.
The reason for the change will be talked about later in this article as a veteran will be wearing number 41 for the Canucks next year.
Two notable Canucks who have worn #42: Kyle Wellwood and Alexander Burmistrov.

It’s a bold choice to follow in Loui Eriksson’s footsteps, but no matter the case, Nils Höglander has decided to wear his favourite number for the 2021-22 season.
Höglander wore number 36 last season and was second on the team in even-strength points. Let’s hope that the number 21 is not cursed as we hope for a strong sophomore season from the 20-year-old Swede.
Two notable Canucks who have worn #21: Jyrki Lumme and Cam Neely.

Here are the players joining the organization for the 2021-22 season who did not play for the Canucks last year.

The veteran who took 41 away from Gadjovich is going to be backing up Thatcher Demko all year long. Jaroslav Halak has worn the number 41 for all 15 of his NHL seasons.
When he takes to the ice for the first time in a Canucks jersey, it will be the sixth NHL team where he has worn number 41.
Two notable Canucks who have worn #41: Andrew Alberts and Curtis Sanford.

There’s a new number 23 in town and it may look weird at first sight. Alex Edler is no longer the Swedish defenceman wearing number 23 for the Canucks, this year it will be Oliver Ekman-Larsson.
OEL has worn the number 23 for all of his 11 NHL seasons and will continue to do the same when he suits up for the Canucks.
Two notable Canucks who have worn #23: Alex Edler and Garry Valk.

As Phil Di Giuseppe battles to make the NHL roster, he will be wearing number 34. He will be in the mix for the 13th forward role or potentially a fourth line winger spot if he has a good camp.
When I think of the number 34, I think of David Ortiz AKA Big Papi. We will have to see if Di Giuseppe can hit a home run at camp and crack the NHL roster or run through the competition like Walter Payton.
Two notable Canucks who have worn #34: Jason Strudwick and (all-name team) Byron Bitz.

After leaving for Tampa Bay to go and win two Stanley Cups, Luke Schenn is back to claim what is rightfully his. He will be wearing number two for the Canucks this season as he looks to work his way up the depth chart.
Schenn has worn number two on five different teams throughout his 13 year NHL career, including when he joined the Canucks for 18 games during the 2018-19 season.
Two notable Canucks who have worn #2: Mattias Ohlund and Dan Hamhuis.

The Canucks have been cranking out strong rookies for a handful of years now and Vasily Podkolzin is next in line. He will be wearing number 92 for the Canucks as he looks to battle for a top-six spot on the team.
Podkolzin will become only the fifth player in Canucks history to wear a number in the 90’s and the first Canuck to ever wear number 92!

I like him already!
As Brad Hunt battles with Olli Juolevi and Jack Rathbone for NHL time, he will be wearing the flashy number 77.
Hunt has worn number 77 for three other NHL teams over his eight years in the NHL.
Two notable Canucks who have worn #77: Nikolay Goldobin and Anson Carter.

The Canucks will have three players wearing single-digit numbers in their top-six this season. Conor Garland will join Brock Boeser (#6) and J.T. Miller (#9) in the nice single digit club as he will dawn the vertical infinity symbol this year.
The last notable player to wear number eight in a Canucks jersey — sorry Jordie Benn — did an excellent job of keeping the puck out of the net. Hopefully, the new number eight can do a splendid job of putting the puck in the net. Garland is expected to play alongside Bo Horvat on the second line and will be a big boost to the Canucks’ scoring this season.
Two notable Canucks who have worn #8: Chris Tanev and Donald Brashear.

Number 18 is going to have a fresh feeling on it this year when newcomer Jason Dickinson slaps it on his back.
Dickinson is expected to be the third line centre but could see time in the top-six as a winger when the lines get a shake-up. Dickinson has worn the number 18 for the past two seasons after breaking into the league with the number 16.
Two notable Canucks who have worn #18: Igor Larionov and Darcy Rota.

A new name that will be in the mix for the Canucks roster is Justin Dowling. He is among Zack MacEwen, Matthew Highmore and Phil Di Giuseppe for rounding out the Canucks’ forward group.
Dowling has played 76 NHL games over the past five seasons and wore number 37 each year. Perhaps he hopes that a number flip will get him consistent NHL time this year with the Canucks.
One notable Canuck who has worn #73: Tyler Toffoli is the only other Canuck to ever wear number 73.

After signing a four-year, 10 million dollar contract, there is now pressure on the Canucks’ new number five to perform.
Poolman could get top-four minutes if he is used alongside OEL or Quinn Hughes and will be relied upon to kill penalties for the Canucks.
Two notable Canucks who have worn #5: Garth Butcher and Dana Murzyn.
Well, that wraps up 12 new jersey numbers that you should know for the 2021-22 season. Training camp and preseason are just around the corner so hopefully this helps you get caught up on all the recent changes to the backs of jerseys!
Uncategorized
Recent articles from Faber