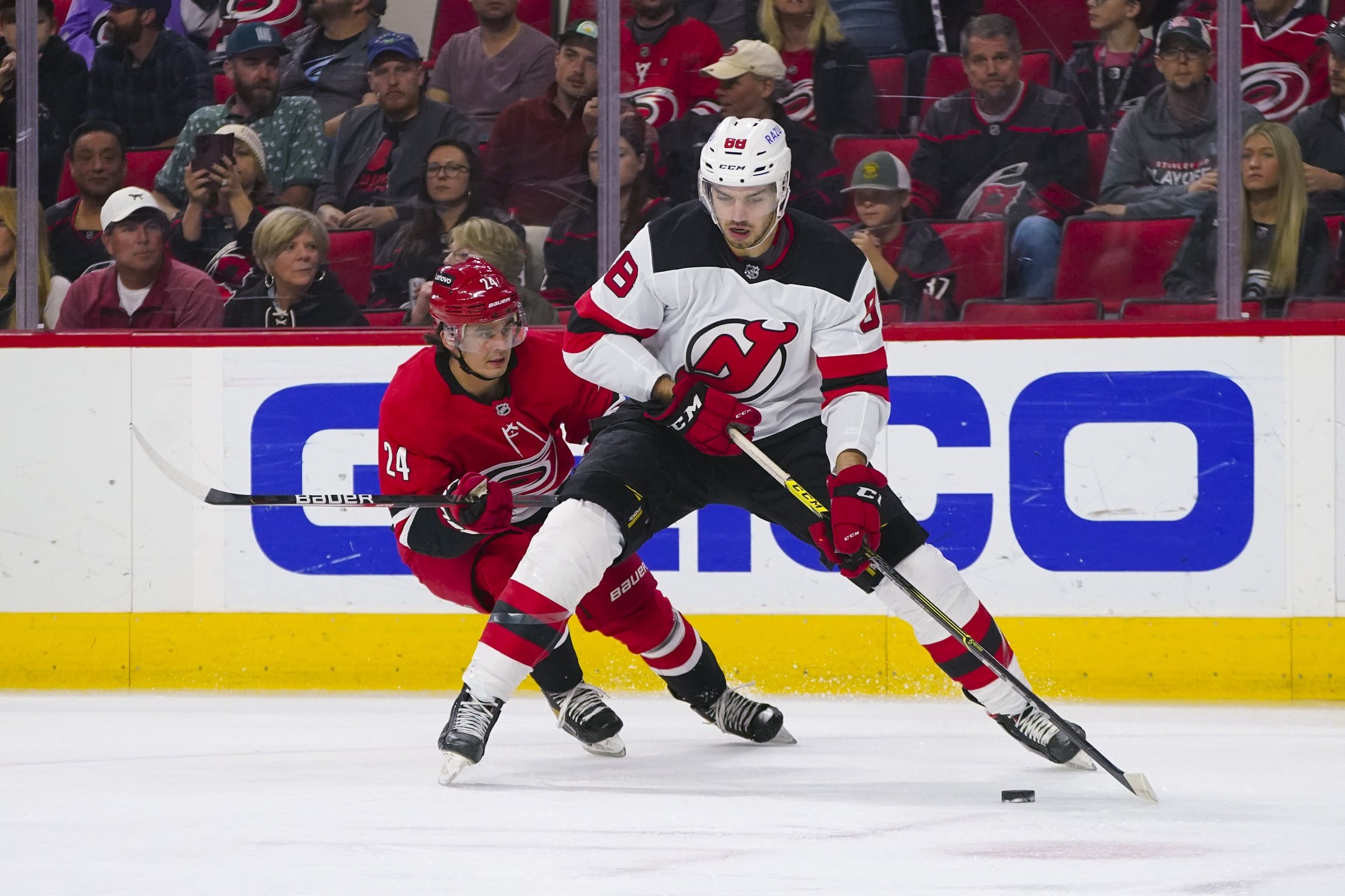 By Stephan Roget
1 month ago
Throughout the late stages of 2022, the city of Vancouver has been under a trade alert almost as frequently, if not more, than they’ve been under a precipitation warning.
We’ve been told all season long that, should the hometown Canucks continue to struggle, trades would be coming. And, well…
The Vancouver front office, now officially into their second calendar year, have also made clear their specific desire to focus on acquiring players 26-and-under. It doesn’t take a genius to understand that the main aim of any retooling will be the much-criticized blueline, especially with the forward corps already looking a little overstuffed as of Tanner Pearson’s impending return to the lineup.
Put all that together, and it stands to reason that the Canucks are already on the lookout for 26-and-under defenders on the trade block around the league, and specifically those defenders who might be available in a swap for a forward.
We at CanucksArmy have been on the lookout, too, and we’ve got a list for you.

RHD, 26, 6’5”, 212lb
$4.1 mil AAV until 2027 (UFA)
Carlo’s name is one that has been attached to the Canucks before, speculated to be part of a rumoured return for players as varied as Bo Horvat, JT Miller, and Conor Garland. Though Carlo has slipped down the Boston depth chart a bit of late, he still fits the profile of pretty much everything the Canucks are looking for in a defender; size, snarl, and a defensive focus on the right side.
For those reasons and others, not the least of which is his very reasonable contract, Carlo will probably be the single most expensive defender on our (alphabetized by team) list. Unless an established top-six forward is part of the deal, don’t expect him to become available to the Canucks anytime soon.

LHD, 22, 6’6”, 230lb
$795K AAV until 2023 (RFA)
Bahl is from BC, he’s enormous, and he may be available for cheap. That’s because, through no real fault of his own, Bahl is already being surpassed by better D prospects before he’s even had a chance to fully break onto the Devils roster.
Bahl has performed well in sheltered minutes thus far, but he’s still mostly an unknown quantity with a lot of untapped potential. It makes plenty of sense for New Jersey to swap him out for a forward or draft pick while he still has value, but finding the right fit on the Vancouver roster is difficult. Maybe Jack Studnicka, or a retained Pearson, makes some sense.

RHD, 24, 6’3”, 198lb
$788K AAV until 2023, $2.75 mil AAV until 2026 (UFA)
Peeke’s name has come up in trade talks a few times this year, as the Blue Jackets desperately try to supplement an offence that is currently being carried by Johnny Gaudreau and Patrik Laine. With a ton of young talent incoming to the blueline, someone will eventually have to go, and that could very well be Peeke.
Like Carlo, Peeke fits the profile of what the Canucks are looking for to a “T.” He’s big, he’s youngish, and he plays shutdown hockey from the right side of the blueline. For those exact same reasons, he’d be expensive to acquire, and would probably have to be made part of a bigger package. The Blue Jackets are on the lookout for centers, so Peeke could be part of the return for a Bo Horvat or a JT Miller, if not the primary piece.

RHD, 24, 5’9”, 175lb
$825K AAV until 2024 (RFA)
Vancouver fans probably remember the diminutive Blankenburg blasting a few of their larger players to the ice earlier this season. That’s pretty much the book on him, but that’s more than enough to at least pique the Canucks’ interest.
At this point, it looks as though Blankenburg will top out as an ultra-physical, bottom-pairing defender, but that’s still something that the Canucks could use. With all that depth on the Columbus blueline, he could be available in a swap for a similarly-aged forward, like Studnicka or perhaps Will Lockwood.

RHD, 24, 5’9”, 170lb
$750K AAV until 2023 (RFA)
It’s always good to try to squeeze talented players out of overloaded situations, and that’s the case when it comes to Hollowell and the Toronto Maple Leafs. It took a bunch of injuries for Hollowell to even get a shot this season, and it’s still not much of a shot.
Hollowell, though undersized, is an excellent skater who can move the puck in transition, which is something that the Canucks lack. No longer waiver-exempt, he could be available for fairly cheap if and when the Leafs’ blueline gets somewhat healthy again, perhaps even in exchange for a depth forward as lowly as a Sheldon Dries. Even then, however, he’d be a “try and see” sort of prospect for the Canucks.

LHD, 25, 6’2”, 176lb
$763K AAV until 2024 (RFA)
A BC local and the brother of Nashville center Ryan, Johansen has been attempting to break onto the Washington blueline for years now, and seems to have largely missed his window. An all-around defender who earns top marks for skating and puck movement, the left-handed Johansen would seem to bring a lot to the table that the Canucks lack, but he’s very much unproven at the NHL level.
The Canucks could take a flyer on him for a reasonable price, but he would still be competing for ice-time in Vancouver.

RHD, 24, 6’0”, 195lb
$1.7 mil AAV until 2024 (RFA)
Earlier this year, it was made fairly clear that Durzi would not be available, despite the Kings’ veritable bevy of incoming RHD prospects. A few months into the season, some of the shine has come off Durzi, and LA may be warming up to the prospect of a deal. Durzi is still plenty capable of eating big minutes at the NHL level, so there’s no rush to trade him, and he won’t come cheap.
Sooner or later, though, Durzi is going to lose his job to the likes of Brandt Clarke, Jordan Spence, Helge Grans, and others. It’s up to the Kings to cash in on him before it gets to that point, and exchanging in part for a scoring forward like Garland or Boeser might just be their best bet. It’s hard to find a one-for-one swap that makes any sense here, so a larger package would have to do.

RHD, 24, 6’0”, 189lb
$2.4 mil AAV until 2023 (RFA)
Fabbro, yet another BC-born RHD, was once vaunted as yet another top-four D in waiting for the Predators, but he’s struggled to make a consistent impact at the NHL level and is beginning to slide down their depth chart. A trade now seems significantly more possible than it did a year ago, and Nashville is always on the lookout for more offence.
The Predators have plenty of cap space to play with, and so dealing the all-around Fabbro becomes an even easier prospect. A deal involving Fabbro-for-Garland could make sense for both sides, and maybe even as a one-for-one. There’s still plenty of time for Fabbro to grow into greater responsibility on a different blueline.

LHD, 23, 6’2”, 185lb
$825K mil AAV until 2024 (RFA)
Joseph has finally been getting into games at the NHL level for the Penguins, but he remains on the outside of their long-term plans looking in. The Rutherford and Allvin connections with Pittsburgh remain strong, and so there’s a strong likelihood that, were he to be given another chance elsewhere, Vancouver would be high on the list of destinations.
He’s no longer exempt from waivers, so that could drive down the price for him, too. A Studnicka-for-Joseph swap could make some sense for everyone.

RHD, 25, 6’5”, 210lb
$2.55 mil AAV until 2023, $1.4 mil AAV until 2024 (UFA)
Myers has already cleared waivers once this season, but don’t hold that against him. Part of that was due to the weirdness of him already being signed for an additional contract beyond this one, and part of it was him naturally being squeezed out of an overly-talented Tampa Bay blueline.
Myers remains gigantic and loaded with potential, even if that’s starting to dwindle as he approaches his mid-20s.
We know, we know, the last thing the Canucks need is another Myers. But this one has the potential to be a low-risk, high-reward acquisition, and could be available at the cost of a cost-effective forward and little more than that.

RHD, 26, 6’2”, 208lb
$2.75 mil AAV until 2028 (UFA)
The Golden Knights made a big commitment to Whitecloud, signing him until the year 2028, but we know how much loyalty counts for in Vegas. Their blueline is still in flux, but with cap an ongoing concern and Alex Pietrangelo already locked into place on the right side, Whitecloud could easily become available, especially given his lackluster play thus far in 2022/23.
Whitecloud’s AAV makes him attractive, but that term might scare off plenty of teams. The Knights wouldn’t be able to take in any extra salary, so a trade would have to be cap-neutral at worst. Maybe a retained Pearson makes sense as a piece to put the Knights over the top.

LHD, 24, 6’7”, 228lb
$900K AAV until 2023 (RFA)
The Jets have too many blueliners, and Stanley finds himself firmly in the “extra” category this season, and not without good reason. Aside from being a big, physical body, Stanley just hasn’t progressed into full-time NHL duty quite yet, and he’s running out of time.
Still, players of his size will always get second and third chances, and someone will undoubtedly take another look at Stanley eventually. The Canucks could make a low-ball offer for him now, or wait and hope that he hits waivers sooner, rather than later. He might not add much, but he could soften the blow of losing Luke Schenn if the latter is traded this season.
Editorials
Recent articles from Stephan Roget