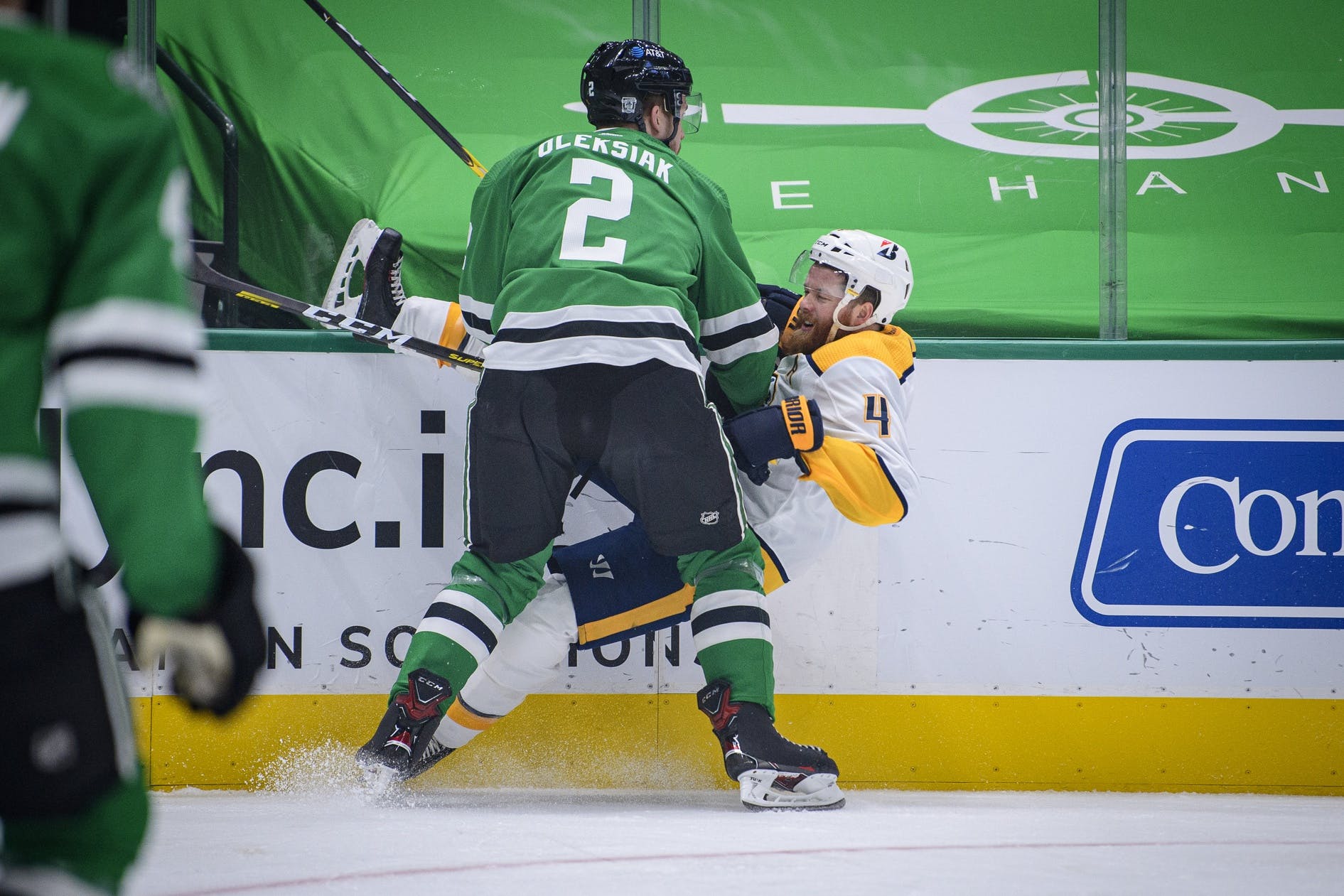 By Stephan Roget
1 year ago
It’s summer in British Columbia, and with it have come the usual rounds of offseason interviews featuring the province’s most reliable and renewable resource: controversial Jim Benning quotes.
Just last week, the Vancouver Canucks’ GM declared that the team had “enough guys that skate well and move the puck out” like “Hughes, Schmidt, and Rathbone” and would instead be seeking defenders with “size and strength” during the 2021 offseason.
We won’t get into the wrongheadedness or anti-trendiness of that take, because it probably wouldn’t do anyone any good. Regardless of one’s opinion of what Benning said, he’s obviously a general manager who wears his heart on his sleeve, and so his words have to be taken at face value.
The Canucks, with all of Alex Edler, Travis Hamonic, and Jordie Benn gone to trades and free agency, are virtually guaranteed to sign or re-sign at least one UFA defender, and probably multiple.
And, from the sounds of it, they’re going to be big and strong.
So, we took a look at the list of upcoming UFA D to see if we could figure out which of them Benning and Co. were likely to target in the coming months.
Our stipulations were pretty simple: the defenders had to be 6’2” and 200lbs or bigger. They had to be defence-first types, or at the very least somewhat defence-oriented. A heavy preference was given to right-handed defenders, or those able to play the right side, because that’s where the Canucks are thinnest. And physicality and truculence were considered major pluses, because we’re pretty sure that’s something Benning means when he says “big and strong.”
Let’s meet our giant-sized potential D-Men.
All salary courtesy of PuckPedia, all stats courtesy of NaturalStatTrick (advanced stats are for even-strength play).

From NaturalStatTrick.com
If size is what you’re looking for, Oleksiak has to be number one on your list. He’s the heaviest and third-tallest player in the NHL, he’s a UFA, and he’s coming off perhaps his best season yet. Oleksiak, a natural lefty, has played much of his career on the right side, and this year he partnered with Miro Heiskanen to form a top-pairing that delivered in big minutes.
Oleksiak played strict matchups, held down sparkling possession metrics, and killed more penalties than ever before. His offence is middling, but not insignificant, and he’s heavily physical.
Oleksiak will be looking to cash in as a UFA, but that doesn’t mean he isn’t worth it. Whether the Canucks can fit him in under the salary cap is another matter entirely.
Expected contract: Four-five years at $4.5-5.5 million

From NaturalStatTrick.com
After a lengthy career in Columbus, Savard rightly garnered a ton of attention as a rental at the 2021 Trade Deadline. He’s earned a reputation as a defensive stalwart, and although his numbers dipped as did the fortunes of the Blue Jackets, Savard immediately rebounded for the Lightning, and has continued to rebound all the way to the Stanley Cup Finals.
Savard is big and mobile enough to match up with the league’s best, and he’s even more suited for postseason play. He’s a penalty killer supreme and an expert shot-blocker. His offence is pretty much a nonfactor, but that’s not what you’d be paying him for. Either way, you’re probably paying him a lot more than the Canucks can afford.
Expected contract: Four-five years at $5-6 million

From NaturalStatTrick.com
It wasn’t all that long ago that Larsson was a punchline, after having been dealt “one-for-one” for Taylor Hall, but Edmonton fans have finally learned to appreciate the stalwart defender — just in time for him to hit unrestricted free agency.
Larsson didn’t play quite as dedicated a shutdown role as usual in 2021, but he still laid hits, killed penalties, and blocked shots with his usual aplomb. He defended well enough against opposing top lines that Edmonton fans were more than willing to extend him if they could afford it.
With few prime RHDs on the market, they may not be able to, but then that doesn’t bode well for the Canucks’ chances, either.
Expected contract: Four-five years at $4.5 to 5.5 million

From NaturalStatTrick.com
Ceci, like anyone who struggles in a Canadian market, had become a bit of a meme in hockey circles, but he’s since been on a redemption tour. He escaped Ottawa to perform surprisingly well in Toronto last season, and he’s been an absolute revelation in Pittsburgh, where he was perhaps the best overall defender on a playoff roster.
Ceci has always been a solid offensive contributor, but his defensive game finally rounded out nicely in 2021. He’s no shutdown master, but he does kill a buttload of penalties and gets by without the most talented of linemates. He’s not overly physical, but doesn’t shrink away, either.
Ceci won’t break the bank as a UFA, but if the Canucks can only afford one single free agent, they’d probably want someone more strictly defensive and less “two-way.”
Expected contract: Two-three years at $3-4 million

From NaturalStatTrick.com
Hakanpaa came out of relatively nowhere as a 29-year-old NHL rookie, but by the Trade Deadline he was being targeted by a playoff team in the Hurricanes. He’s nothing flashy, but he definitely qualifies as “big and strong” — in fact, that’s his whole MO.
Hakanpaa will probably never progress beyond a bottom pairing, penalty killing defender with bite, but that’s alright. His size and tenaciousness make him frustrating and difficult for opponents, and getting harder to play against is always an offseason goal for any franchise.
Expected contract: Two-three years at $1.5-2.5 million

From NaturalStatTrick.com
Talk about “been there, done that.” The Canucks could have kept Schenn around after his acquisition and subsequent success alongside Quinn Hughes in 2019, but they let him go — and have since watched him play a bottom-pairing role on two successive Stanley Cup Finalists.
He remains a sheltered fringe defender on any contending roster, but he excels in that role, and if he’s good enough for the Lightning, he’s good enough for the Canucks. Size, snarl, and a willingness to scrap with anyone: Schenn has everything Vancouver is looking for. Unfortunately, he may end up overpaid based on his recent playoff pedigree.
Expected contract: Two-three years at $1-2 million

From NaturalStatTrick.com
When he was dealt from Detroit to New York, Smith was considered a cap dump and played as frequently on the wing as he was in his natural position. Since then, he’s worked his way back into the picture as an NHL defender — albeit one who will never again earn a high salary.
Smith needs sheltered matchups, but he can kill penalties regularly and brings a punishing physical game that always keeps opponents on their toes. Last season, he famously made Tom Wilson answer for his ridiculous actions, and that no doubt earned him a bunch of fans around the league.
Expected contract: One-two years at $1-2 million

From NaturalStatTrick.com
Look, Chara is only here because if we didn’t include him, everyone would be all like “Where’s the biggest d-man in the league?”
At age 44, Chara played a more important role for the Capitals than most would have expected him to, and his numbers were downright phenomenal for what they were paying him. But we all know he’s never leaving the East Coast, and he’s certainly not doing it to come to Vancouver.
Expected contract: One year at $800K

From NaturalStatTrick.com
On the one hand, Nemeth has a lot of what the Canucks are looking for. He’s enormous, defence-first, kills penalties, and takes on moderately difficult matchups. He looked atrocious in Detroit, and then phenomenal in Colorado right into the playoffs.
But while Nemeth is big and strong, he’s also far from an intimidating presence. This is a guy, after all, who once got beaten up by Tyler Seguin — shortly after being Seguin’s teammate, no less. Nemeth could be a valuable addition to any roster, but he’s not the fit they are looking for.
Expected contract: Two-three years at $2.5-3.5 million

From NaturalStatTrick.com
Miller is a rough-and-tumble defence-only defender who has been holding down top-four minutes on a contender for some years now. He kills penalties proficiently, beats up on opponents, and can take on all comers. What’s not to like?
Age and injury history. Miller has essentially never been healthy through his seven years in the league, and his 2021 season ended early yet again after an injury knocked him out of the playoffs.
As an extra defender and replacement for Jordie Benn, Miller is an excellent fit — but he may have his heart set on a loftier contract.
Expected contract: One-two years at $2-3 million

From NaturalStatTrick.com
Morin is another player who makes this list on a technicality. He’s tall and mean, and don’t let his spindliness fool you — Morin can throw ‘em. But he’s also only barely an NHL-quality player. As a defender this past season, Morin received butter-soft deployment and still came away with a brutal statline. By the end, Philadelphia was regularly icing him as a winger.
Sign Morin for enforcing and depth if you’d like, but don’t expect him to play an everyday role.
Expected contract: One year at $800K

From NaturalStatTrick.com
Tinordi was the guy the Bruins brought in to deal with the likes of Tom Wilson, and at that he was relatively successful. As a defender, Tinordi picked up some playoff minutes, and was moderately effective in heavily-sheltered minutes, but nothing more than that.
Like Morin, Tinordi is the sort of player one signs to serve as a number eight on the depth chart and draw in against especially physical opponents. He’s not THE answer the Canucks are looking for, but he could be AN answer — and he’s definitely both big and strong.
Expected contract: One-two years at $800K
Uncategorized
Recent articles from Stephan Roget