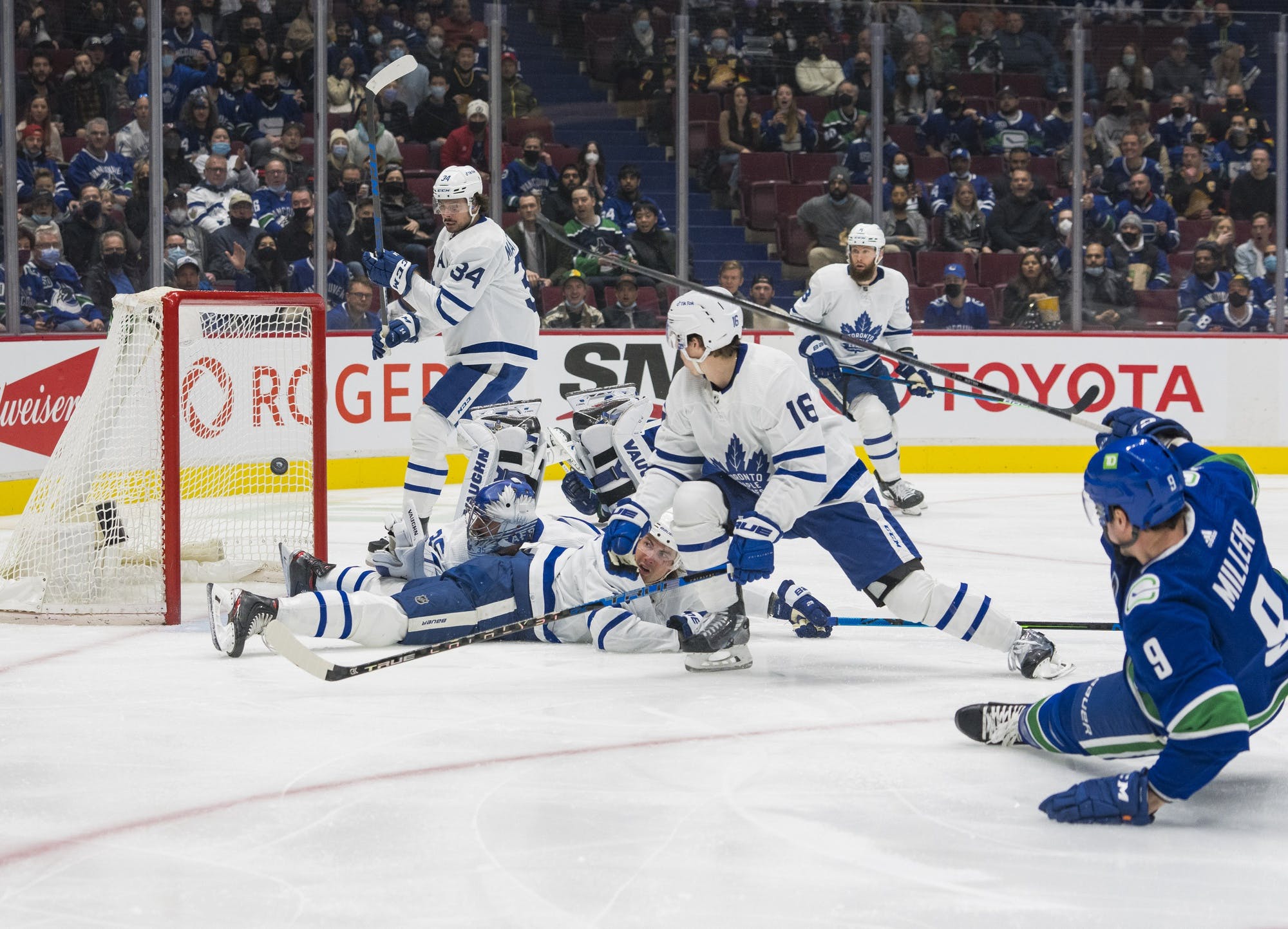 By Stephan Roget
9 months ago
General Manager Patrik Allvin and his newly-assembled Vancouver Canucks front office have yet to make their first official transaction, but with a scant three weeks to go until the 2022 NHL Trade Deadline, the wait is almost over.
Between now and then, someone is going to move. Probably multiple someones. And although there’s now some debate to be had about the team’s long-term intentions with him, the one player at the top of the Vancouver trade board is still JT Miller.
Reportedly, he’s at the top of some other teams’ trade boards, too, and one of those teams is apparently the Toronto Maple Leafs.
Whether it’s in the form of an actual rumour or more theoretical speculation, everyone seems to be talking about Miller and the Maple Leafs this week. Coming off three PPG seasons, loaded up with intangibles, and potentially available for a cap hit as low as $2.625 million, it’s easy to see why Toronto would be interested in adding Miller to their Stanley Cup hopeful roster.
But there are always two sides to a trade, and so we decided to take a gander at what the Maple Leafs might be able to offer up in return, and whether a fair deal can truly be struck between the nation’s most important franchises.

The Canucks’ search for a long-term solution on the right side of their blueline continues, and so it’s no surprise that Liljegren’s name has popped up in discussions of a potential Miller trade.
The formerly much-ballyhooed prospect has taken his time making the NHL after being drafted 17th overall in 2017, but he’s here now and he’s already finding success. Smooth-skating to the extreme, Liljegren is a two-way talent whose game will probably trend in a more offensive direction as he develops, but whose defensive deficiencies also seem highly-fixable, suggesting a top-four future for him down the road.
At the moment, Liljegren is playing an active role on the Maple Leafs roster. But the recent addition of Ilya Lyubushkin pushes him down the depth chart, and that might be enough for the Leafs to consider making him a part of this trade.

If there’s a young player in the Toronto system that will be deemed untouchable, it’s probably Sandin. Though he’s currently assigned to the AHL for cap-related reasons, Sandin is already more-or-less a full-time NHLer, and a pretty versatile one, at that. Capable of playing both sides, Sandin is an intelligent player with the sort of vision that allows him to affect the game greatly from the backend.
Sandin can skate, he can score, and he can make an effective first pass. He’s fine in his own zone already and, despite being a little undersized, should only get better in that regard. Nothing — not even playing in Toronto — seems to rattle Sandin.
For these reasons and more, the Leafs would be loath to move him, but that shouldn’t stop the Canucks from asking.

Niemelä’s is a name that has only really made the rounds in the hockey world as of this year, but what a year it’s been. Coming off top defender honours at the 2021 WJC and still a teenager for another month, he’s been dominating the top Finnish pro league all season long, and currently sits second in blueline scoring in the entire Liiga.  Said to be an excellent decision-maker, Niemelä doesn’t just star at the offensive end of the ice. His speciality is skating with the puck, carrying it from his zone all the way down the ice — and then, more often than not, into the opposing net.
Niemelä may be incredibly slight right now, but it hasn’t stopped him from succeeding against the best adults Finland has to offer, and he has the sort of frame that can be grown into. Defensively, his game has some holes, but that’s probably to be expected for a teenage rookie pro. His positioning and stickwork are all exceptional, he just needs more muscle and experience.
By the end of the year, expect Niemelä to challenge for recognition as Toronto’s best prospect, period — unless, of course, he’s traded elsewhere.

Most would currently label Robertson as the Leafs’ singular best prospect, and he’s a talented player, to be sure. But injuries and bad luck have hampered Robertson’s entry into the NHL, and have conspired to keep him out of all but a handful of games this season after only playing 27 last year.
But that hasn’t seemed to slow down Robertson’s development. He has all the attributes one might expect from a diminutive scorer; he’s shifty, dynamic, and at his best with the puck on his stick. But he’s also an agitator, a supreme forechecker, and a high-octane puck pursuer. Robertson looks like an all-around talent that is all-but-destined to play a long-term top-six role in the NHL — just as soon as he can stay healthy.
If the Canucks are looking to replace Miller’s offence sooner rather than later, Robertson is their best bet by far.

Another prospect rapidly climbing the cupboard shelves in Toronto in 2021/22 is Knies, an enormous power forward currently tearing up college hockey. Drafted in the second round last year, Knies is at a PPG as an NCAA rookie and made enough noise to be selected for the American Olympic team, a huge honour for a teenager.
Speaking of huge, it’s size that is at the center of Knies’ success. Knies uses his big body to protect the puck, skates well enough with soft enough hands to bring it to the net, and has a knack for getting into scoring position when he doesn’t have possession. With the holy trinity of size, skating ability, and a powerful shot, Knies is a good bet to keep on producing at the professional level, and he’ll probably wind up the sort of player who makes a larger impact than even his stats might suggest.
In terms of replacing Miller on the Vancouver roster, Knies is a longer-term solution than a Robertson, but he might wind up being a more valuable one.

Way further down the prospect depth chart, we find Menell, an undrafted RHD they acquired this past summer from the Minnesota Wild. A natural power play quarterback, Menell has put up big numbers at every level, including 38 points in 47 KHL games last season, but he’s yet to receive much of a chance in the NHL.
There’s a reason for that outside of Toronto’s depth, and it’s definitely Menell’s occasionally-spotty defensive coverage. Already undersized, Menell sometimes struggles in his own end, and can easily be overwhelmed by opposition pressure. That’s something he’ll need to change if he ever wants to crack the big leagues as something other than a special teams specialist.

Vancouver’s own Kerfoot has had his name bandied about in Miller trade discussions already, and it’s easy to see why. Aside from the local connection, Kerfoot’s $3.5 million salary would make plenty of space to accommodate the addition of Miller, and he’s currently occupying the top-six LW spot that many in Toronto envision Miller eventually taking. For the Canucks, Kerfoot has some obvious middle-six value now and, if they can convince him to sign at a literal hometown discount after next season, in the long-term.
With all that said, trading Kerfoot now doesn’t make as much sense for the Maple Leafs as some seem to think. The Leafs are definitely loading up for a Cup run, and that’s doubly true if they go after Miller. Kerfoot, meanwhile, is in the midst of a career season, and has demonstrated the versatility in the past to play multiple positions all over the lineup. In a long postseason run, he represents invaluable depth and perfect coverage for injuries higher up the depth chart. Expect them to keep him around if it’s at all possible.

As an NHL-quality throw-in to any Miller trade, Dermott makes a lot of sense. He’s fallen way down the Toronto blueline depth chart, but is still young enough to have some upward potential left in him. Capable of playing either side of the ice, Dermott is your prototypical all-around two-way defender.
He doesn’t have any one skill that he excels at in particular, but he’s not terrible at anything, either. Dermott looks like he’d be an upgrade on a large portion of the Canucks’ blueline corps already, and perhaps into the future, as well.

Just a year ago, Holl was thought to be a rock-solid top-four RHD for the Maple Leafs. They thought enough of him to bend over backward to keep him (and lose Jared McCann) in the Seattle Expansion Draft. But the wheels have fallen off for the 30-year-old Holl, and he’s now a regular healthy scratch with little hope of working his way back into the lineup, unless there are injuries.
Taking Holl in a Miller trade is all about managing the cap. If the Canucks were to accept Holl as a cap dump and retain 50% on Miller’s contract, they could make this deal nearly-cap-neutral for the Leafs — and that means that the Canucks can ask for a lot more in return. Sure, having Holl around for an extra year is less than ideal. But the Canucks could honestly use the help on RHD, and if it means an extra pick or prospect thrown into the trade, it’s more than worth it.

Mikheyev makes this list as a short-term replacement for Miller, and because he requested a trade from Toronto earlier in the year. Fighting through tough injuries, Mikheyev continues to produce at a respectable middle-six rate for the Maple Leafs, but isn’t someone they would miss much, especially with Miller around.
That said, he doesn’t really add anything that the Canucks don’t already have on their roster, so don’t expect him to add much value to any offer. He’s a talented throw-in, but a throw-in all the same.

GM Kyle Dubas and the Maple Leafs hold all of their first and second round picks for the next three years. They have traded away their third, fourth, fifth, and sixth round picks in 2022, but that’s not a major factor in this discussion.
The Leafs’ first round pick this year is going to be in the 20s at best, and could definitely drop much lower than that with Miller on the team.

The Canucks really, really need to add more talent at the RHD position, so it’s got to be either Liljegren or Niemelä at the center of the trade. We’ll take the younger option with the higher upside. For Miller and retention on his contract, the Canucks should ask for an additional pick and prospect on top of the RHD. Knies has appeal for his unique attributes, and a first rounder is always nice. To cinch it, the Canucks take back Holl — a player they can actually use — making the trade nearly-cap-neutral for the Maple Leafs and allowing them to rent someone else at the Trade Deadline.
JT Miller (50% retention) for Topi Niemelä, Matthew Knies, Justin Holl, and a first round pick
Is that a deal you’d want the Canucks to take? Or do you have a better offer? Let it be known in the comment section below.
Uncategorized
Recent articles from Stephan Roget