This is the fourth time Will Lockwood has been included in these annual prospect rankings and his #16 ranking is the lowest it’s been since his draft year. Previous years had him ranked #8 and #9.

The road as a Canuck prospect has been less than smooth for Lockwood, to say the least, but he’s battled through numerous injuries and surgeries to improve his play and inch closer to an NHL lineup each year. However, he still has a long road ahead and will need to have his best hockey ahead of him if he hopes to make the jump to pro hockey.

This time last yea,r Lockwood was progressing on the long road to recovery following his second shoulder surgery and hoping for a bounce-back junior season. In an interview before the start of his junior season, Lockwood mentioned that he was feeling healthy and more fulfilled in life after admitting that his injury trouble had made him feel like he had lost something.

That fresh perspective may have been what helped Lockwood put together a productive season coming off the injury. Moving forward, Lockwood will return to Michigan to serve as the program’s 100th captain, obtain his degree, and look to sign an NHL contract after wrapping up his NCAA career.

In keeping with past lists, we’re considering a prospect to be any player who is 25 years of age or younger and who has played less than 25 regular season games at the NHL level. This is a slightly modified and simplified version of the qualifications for the Calder Trophy.

As of the 2018/19 season, both Elias Pettersson and Adam Gaudette have graduated from prospect status.

Jeremy Davis’ prospect Graduation Probabilities System—or pGPS for short— shows us that the latest season saw Lockwood’s Expected Likelihood of Success (XLS%) rise a bit from his D+2 season to 12.6%, but still not reach the heights of his freshman year. The likelihood of becoming a top six player also remains very low as the Canucks at this point hope for him to develop into a tenacious bottom-six forward built for tomorrow’s NHL.

Davis also brings us Lockwood’s cohort map, which features the prospect within a large sample size. While Lockwood’s aforementioned XLS% is 12.6%, his XLS% of being a top six player is underwhelming at 2.3%. The most similar NHLers are Sheary, Brown, Caggiula, Copp and Rust. That’s a feisty group of bottom sixers to be compared to, but let’s not ignore the number of busts and fringe players that surround him on this map. 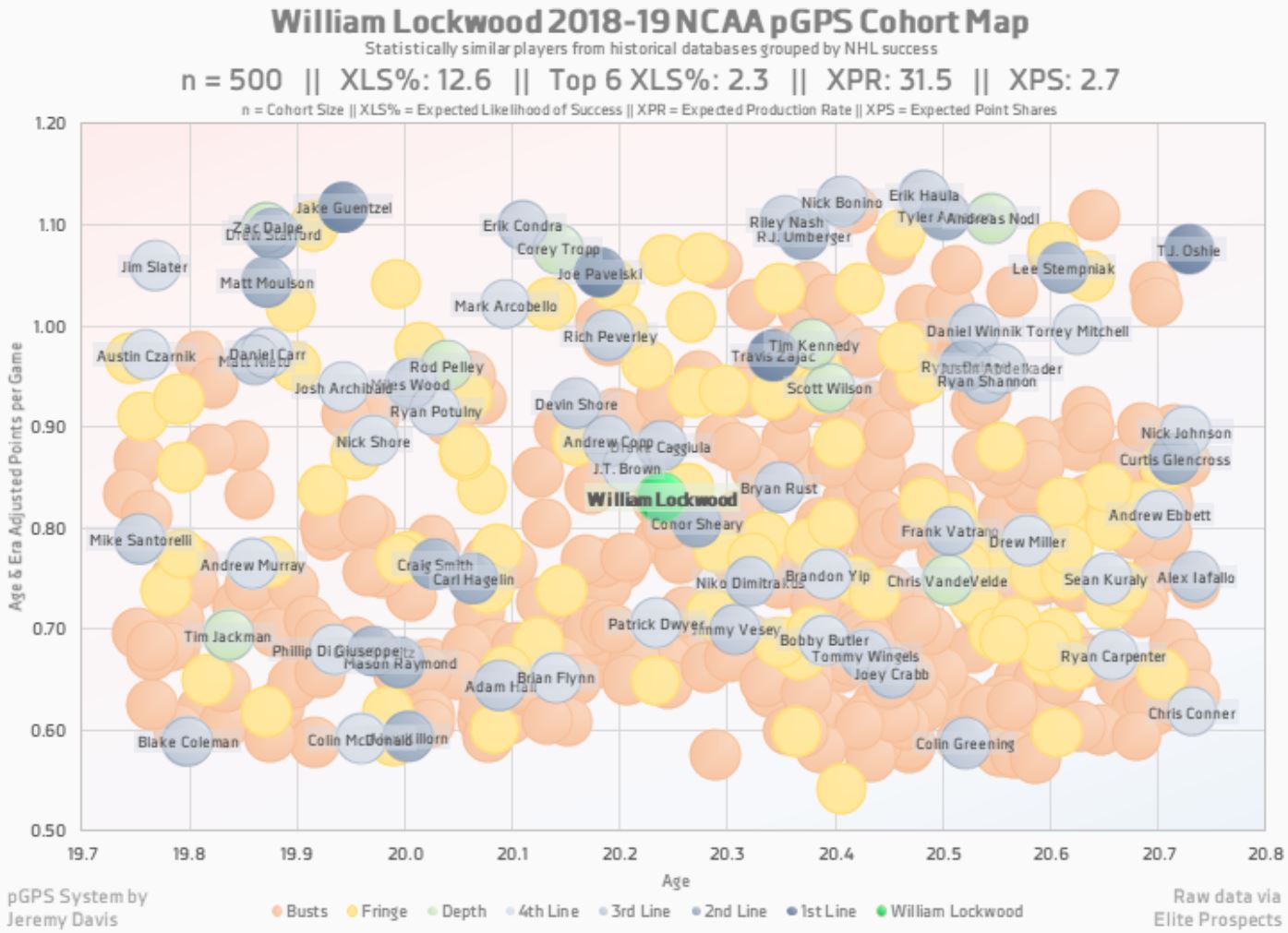 A quick glance at Lockwood’s Tier Chart based on Davis’ analysis, shows the likelihoods of him reaching specific deployment levels. It’s most likely that he will be a bust or a fringe player, but his 13% success rate isn’t bad when you consider the developmental time Lockwood has lost to injuries.

Lockwood’s 0.86 points per game rate saw him finish 71st league-wide in that category and 2nd on Michigan, only behind Quinn Hughes. With the man advantage, Lockwood’s 11 points were also 2nd to Hughes who sat at 13. Below are some of the other notable numbers from last season.

It’s a good stat line for a D+3 season in the NCAA, but what really jumps out is the number of shots. Lockwood led the team in shots and the next highest shot total was 110.

Also of note, Michigan’s star forward and Lockwood’s regular center, Josh Norris missed the remaining two months of the season and Lockwood raised his game and put the offense on his back. In that time his play picked up and he remained productive despite assumptions that it would hurt his totals.

Lockwood plays a determined game, which made possible mostly by his compete level and skating. His lines and edgework have been some of the best among the Canucks’ prospects and over the years he has been able to improve his reads with and without the puck, allowing him to forecheck and control possession efficiently. Lockwood has a noticeable ability to create space with his skating and close in on the puck-carrying opposition because of these strengths.

With his fifth goal of the season, @lockwood_will nets the first goal of the game with assists from @joshnorris10 and Hughes!#GoBlue pic.twitter.com/5G06s3xWyl

“He’s a 180-pound guy trying to play like a 220-pound guy. It’s just the way he’s wired. He plays full-out, he plays hard and he plays with an edge. He’s just got to learn to back off a little bit, but it’s hard to do that at times.”

Lockwood has shown flashes of the tools that could make him successful in the NHL, but he has also shown how his desire to do too much can result in plays moving the other way, which is partially what Pearson may be referring to. His shot has improved but but it still has a lot of room to improve. While he isn’t shy to shoot, he doesn’t often beat goalies clean when they can see it coming. It’s not the fastest or most accurate shot, but he has shown the ability to get it off quickly.

There’s been a bit of speculation about his future as he begins his senior year without an NHL contract, but there’s no reason to believe that he and the Canucks don’t want to get a deal done after this season. Up to this point, both sides have shown a desire to reach an agreement when the time comes.

Coming off a sophomore season cut short by injury, Lockwood played himself back onto the Canucks’ radar with his junior season. However, he will need to build on that in his senior year and dominate against younger competition. If all goes well in his senior year and he inks a deal with the Canucks, expect Lockwood to report to Utica for at least one or two years. While his production has never been breathtaking at any level, he may be able to scratch and claw his way onto an NHL roster at some point in the future. A spot in the Canucks top six is highly unlikely, but he could slot in as a third or fourth-line winger one day.