Advertisement
Ad
Why the missed high-stick on Quinn Hughes wasn’t reviewable, and why it should be 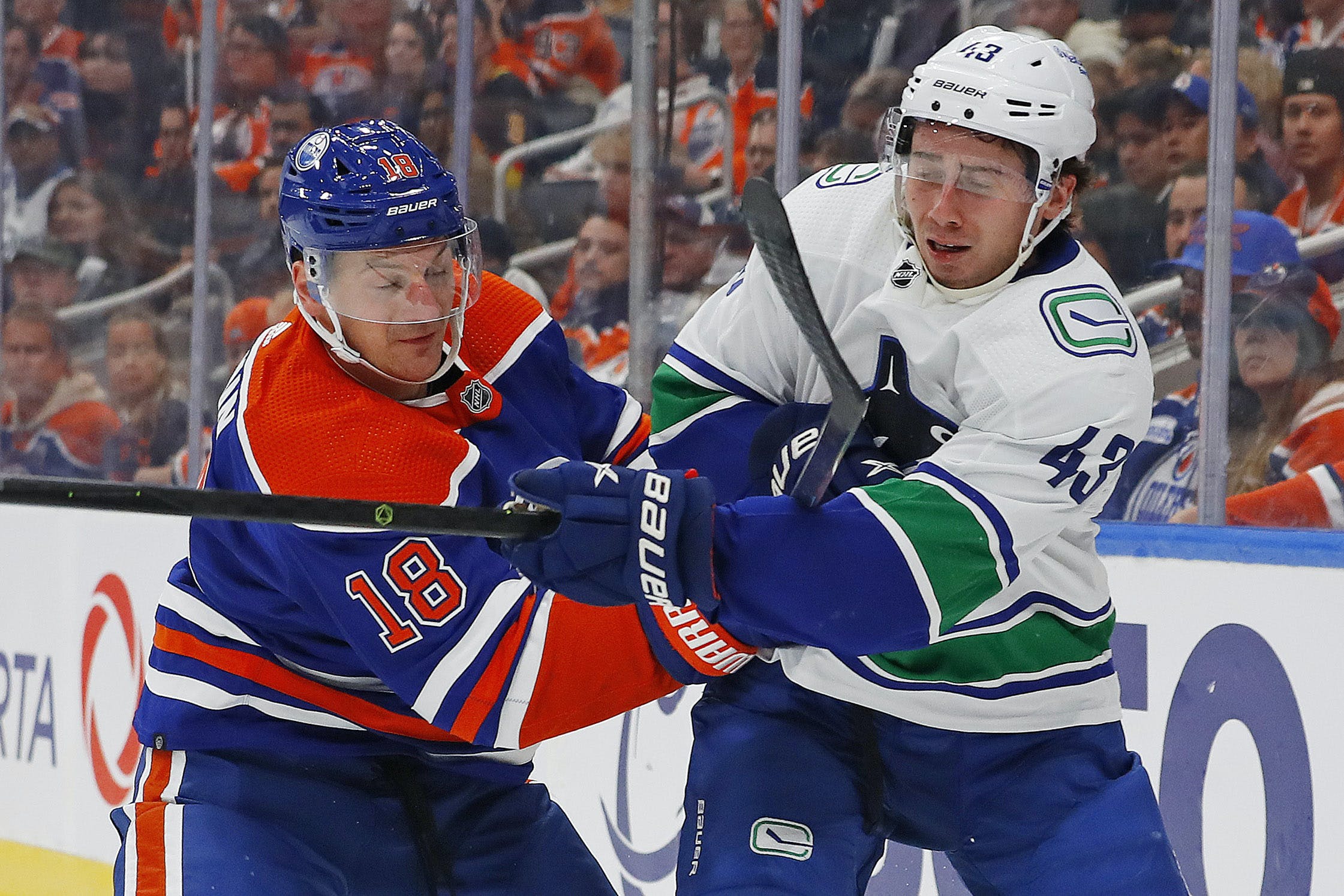 Photo credit: © Perry Nelson-USA TODAY Sports
By Lachlan Irvine
3 months ago
Comments
We’re only a few days into the new season, but the NHL’s referees already have a small controversy on their hands. And no, I’m not referring to Chris Rooney’s way too rehearsed speech during the Rangers-Lightning game.
In the Canucks 5-3 loss to the Edmonton Oilers on Wednesday evening, the contest’s turning point came during an Oilers power play when Evander Kane high-sticked Quinn Hughes by the Canucks’ net, sending Hughes to the ice with a cut on his face. Despite an obviously prone player on the ice covering his face, no referee blew their whistle, and the Oilers scored a few moments later in the ensuing chaos.

Refs miss an obvious high stick on Quinn Hughes and the Oilers score on the ensuing scramble. #Canucks lead 3-1. pic.twitter.com/6uCywBzLH4

Hughes immediately went down the tunnel for repairs after the goal and didn’t return until the late stages of the second period. The Oilers would go on to score five unanswered goals en route to their season-opening victory.
There’s no debate that the refs missed this call, but to err is human. The nature of sports means that now and then referees are going to miss obvious calls, and they’re sometimes going to call penalties that arguably shouldn’t be. And the refs gave Vancouver plenty of opportunities to make up the goal; the Canucks went 1-for-8 on the man advantage and gave up a shorthanded goal late in the second period that tied the game.
Advertisement
Ad
Advertisement
Ad
But for specific situations like the one Hughes and the Canucks faced, there definitely should be failsafes in place to prevent clear missed penalties from affecting the final score. And good news, the NHL already has the proper equipment in place: video review.
The NHL’s use of video review has massively expanded in recent years, and while it’s still got a few bugs to iron out – the length of time verdicts can take, for one thing – there’s no doubt that the league could use its existing infrastructure to review penalties. And while reviewing every potential infraction would probably bring games to a screeching halt, an argument can easily be made for reviewing missed calls that directly lead to a goal, like what happened to Hughes last night.
The league allowing for reviews on specific penalties isn’t a new concept. Just before this season, the NHL altered their existing rule that gives refs the ability to review major penalties by allowing them to wipe out calls entirely if they see fit. What does have to change is a coach’s ability to challenge missed calls.
Advertisement
Ad
Advertisement
Ad
Under the current NHL rulebook, coaches are allowed to challenge three types of missed plays: offsides, goalie interference and missed game stoppages. A missed high-sticking penalty would likely be added under a new fourth type of challenge, but could also be applied to the existing missed game stoppage category as well.
But the rules as written specifically don’t allow for it. Rule 38.10, which outlines applicable reasons for missed stoppage challenges, includes this excerpt:

Potential infractions that would require a play stoppage in the offensive zone include, but may not be limited to: Hand Pass (Rule 79); High-Sticking the Puck (Rule 80); and Puck Out of Bounds (Rule 85). Such infractions will only serve as a basis for overturning a GOAL call on the ice if video review can conclusively establish that a game stoppage event had occurred in the offensive zone and was missed by the On-Ice Official(s). Where the infraction at issue was a missed penalty call subject to the judgment or discretion of the On-Ice Official(s), such infraction cannot result in the “GOAL” call on the ice being overturned, even if upon review, the On-Ice Official(s) would have made a different call.

In other words, referees can’t call back goals because a penalty wasn’t called. But they absolutely should be able to.
Other sports leagues have changed their review systems to allow for fixing missed calls. In soccer, the Video Assistant Referee (VAR) can alert the on-field ref to a potential missed booking during scoring plays. In the NBA, officials can retroactively call fouls if they notice any while reviewing an existing personal call. And rugby has a Television Match Official (TMO) who can review any potential missed call.
Advertisement
Ad
Advertisement
Ad

The VAR is soccer is allowed to flag moments of "serious foul play" to the referee.

Rugby referees can ask the TMO to review anything they suspect might be foul play.

If the point of having a video review system is to guarantee that the final results of games are fair and accurate, then the NHL shouldn’t have an issue with reviewing missed penalties on scoring plays. After all, if a player’s skate being a millimetre offside can wipe out a goal, then the impact of an injured defender should be worth a lot more.