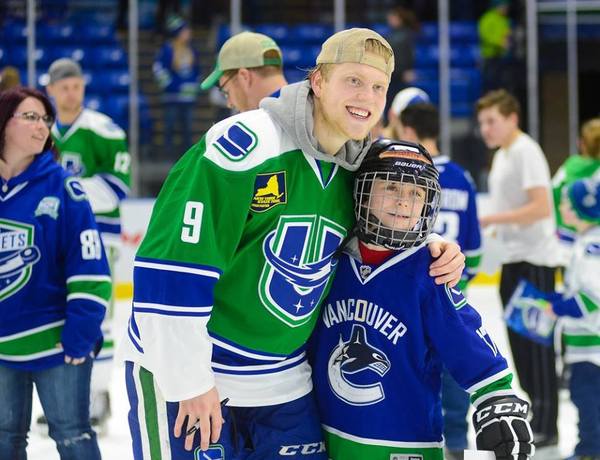 Photo Credit: Lindsay A. Mogle / Utica Comets
After a little Christmas break, the Comets got back at it last weekend for a pair of games against a couple of fierce divisional rivals. The Comets were severely short-handed as the injuries woes continue for both the Comets and the parent Canucks club.
Despite missing most of their defence core, the Comets just seem to keep getting better. They added two more wins this week and did so in sound fashion.

Riding a 32-save performance from Richard Bachman, the Utica Comets ran their franchise-high road winning streak to eight games with a 3-1 win over the Rochester Americans at the Blue Cross Arena Saturday night.
Cole Cassels (1-0-1), Blair Jones (1-0-1), and Jordan Subban (1-0-1) each found the back of the net. The Comets were outshot by the Amerks 33 to 31 in the victory.
The Comets improved their record to 15-10-2-2, and now sit just one point back of the third place St. John’s IceCaps in the Western Conference’s North Division, with 34 points.

For the second straight night the Utica Comets surrendered the game’s first goal early on in the first period, and for the second straight night the Comets rallied to take home the victory. Supported by goals scored by four of the Comets newest defensemen, the Comets defeated the Syracuse Crunch 4-2 Sunday afternoon at the Utica Memorial Auditorium. With the win, the Comets improved their record in the Galaxy Cup series to 3-1-0-0 this year.
The new kids on the Comets block, David Shields (1-1-2), John Kurtz (1-0-1), and Jon Landry (1-0-1) all recorded their first goals as members of the Comets. Danny Syvret (1-0-1) scored his second goal, and fourth point, since joining the team just nine days ago, while Bachman picked up his sixth win of the season, and lowered his season goals against average to 2.19 with a 29 save performance. Brendan Gaunce (0-1-1) extended his point streak to five games with an assist on Landry’s second period goal.
With the win the Comets improved their record to 16-15-2-2, and created a six point buffer between them and the fifth place Rochester Americans for the fourth and final playoff spot in the North Division. The loss dropped the Crunch to .500 with a 12-12-4-1 record.

From the Utica Comets post-game report. 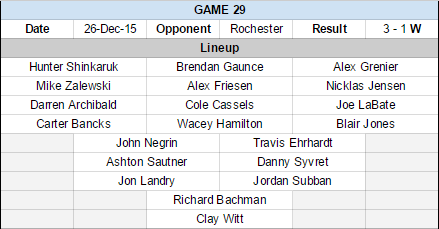 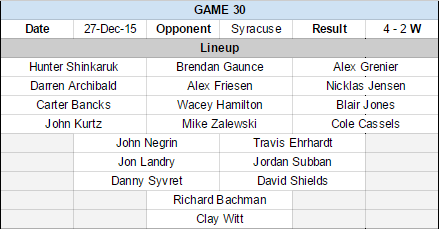 The Comets roster is thin and getting thinner by the day. As Canucks fans are certainly aware, defencemen Alex Biega and Andrey Pedan are already in Vancouver (and playing very well), as well as forwards Linden Vey and Ronalds Kenins. Rookie defenceman Ashton Sautner is the latest call-up, leaving the Comets stretched thinner than ever.
Advertisement
Ad
Advertisement
Ad

With the Sautner call up, Jordan Subban is the last remaining healthy Comets defenceman on an NHL contract https://t.co/Jq7IlXUtnc

You do wonder how Subban feels about being the last remaining NHL contract. It’s kind of liked being picked dead last in gym class. Literally everyone else who is allowed to go to the NHL is in the NHL. Credit to Subban, he doesn’t mope around about it. Instead, he had a two-point week, scoring a goal on Saturday and adding an assist on Sunday.
Cole Cassels managed to stay in the lineup for both games. He finally scored his first professional goal, so maybe that will buy him some time in the lineup (injuries are helping that as well). Rookie Joe LaBate was a healthy scratch on Sunday.
Taylor Fedun remains out with a hand injury sustained on December 9th, and Curtis Valk is technically on Kalamazoo’s injury reserve, still awaiting his season debut.
Advertisement
Ad
Advertisement
Ad
Brendan Gaunce has remained in the top line centre spot for four games now, and though they have put a ton of goals in the net, the Comets’ first line was on the ice for four of the Comets’ seven goals last week and wasn’t scored on once. It’s safe to say they’ll probably stick together for a bit and it looks like Travis Green is liking what he’s seeing.

“(Gaunce) is playing well; he’s back at center.I like how his game is progressing” – Travis Green

Points were pretty spread out this week though the +/- numbers show who was on the ice for the bulk of the goals. Pluses all around last week, as if there was any other possibility: the Comets were not scored on at even strength in either game.
They did, however, allow three power play goals against, as their penalty kill continues to give them a bit of trouble. It currently sits at 14th in the AHL, killing penalties at a rate of 84.1 per cent. On the positive side, they’ve scored seven short-handed goals this season, which in the second most in the league.
Advertisement
Ad
Advertisement
Ad
Their power play is even worse, converting at 14.5 percent, good for 20th in the AHL. They have no man-advantage goals in their last three games and only three power play tallies in their last seven – and all three of those goals came in the same game. The absence of Taylor Fedun is still playing a large role in their flagging power play though Danny Syvret is filling in nicely so far. 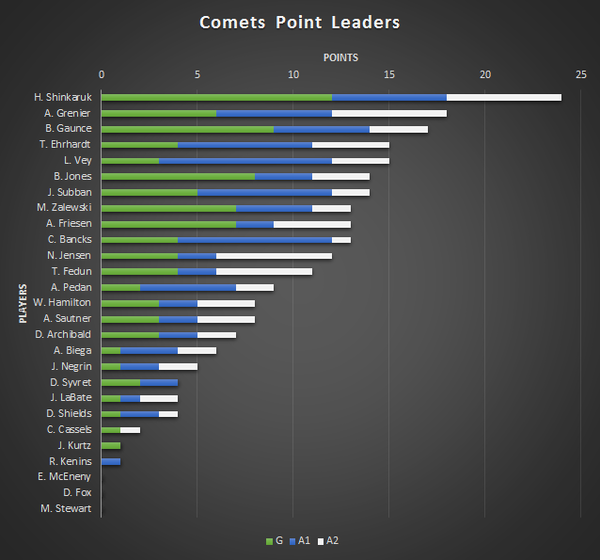 Player of the Week

Player of the week was a bit of a challenge this time. The Comets played only two games and no player had more than one goal or more than two points.
I’m gonna give this one to Jordan Subban, who technically had the most productive week among prospects, I guess, with two primary points. Subban scored the 3-1 goal that put Rochester away, and had the primary assist on Jon Landry’s go-ahead goal in the Syracuse game.
Advertisement
Ad
Advertisement
Ad
As mentioned, Subban is the last remaining Comets defenceman on an NHL contract, but he’s having a nice season offensively. His 14 points (5 goals, 7 assists) trails only Travis Ehrhardt (15 points) among defencemen. His struggle has been on the defensive side of the puck, though not where you might expect.
The 5-foot-9, 178-pound rearguard hasn’t been overwhelmed physically, which isn’t overly surprising – his strength and conditioning are well documented. His decision making while under pressure has been his challenge this year. When given time, Subban has the ability to rush the puck, or make great long passes to set up offensive situations. When pressured, though, he’s been guilty of giving the puck away much more often than the coaching staff is probably comfortable with.
Advertisement
Ad
Advertisement
Ad
“He certainly has the offensive flash that everybody thought he did, but defensively he’s struggling just a little bit right now, a few too many turnovers, a lot of mistakes,” Brendan Burke, Comets play-by-play commentator, told TSN1040 last week. “I don’t see anything that says ‘No, there’s no chance that he’s gonna play in the NHL’, but I think he’s still got a lot of things that he’s gotta improve on before we get to that point. I think it’s just a matter of the game moving a little bit faster at the American Hockey League level and the guys being a little bit smarter around him and kinda making him get into some uncomfortable situations and cough the puck up a little bit too often.”
That being said, his offensive abilities are hard to overlook, and he may well still get his NHL chance – hell, the Canucks are one injury away from being forced to call him up as it is. With the production already there, Subban needs time to work on his all-around game, and he’s getting plenty of that now with all of the injuries.
Advertisement
Ad
Advertisement
Ad

This week the Comets hit the ice for three games, including a midweek home-and-home against the Albany Devils, and a Saturday visit from the St. John’s IceCaps.
The Devils (New Jersey’s affiliate) are another divisional rival and sit one point above the Comets in the standings, with a record of 17-8-3-0. They have a goal differential of +18 though they scored just 77 goals compared the Comets’ 94. That wasn’t a problem the last time these teams met, however, as Albany spanked Utica 6-1. The first game will go at 4:00 pm on Wednesday while the second starts at 2:00 pm on Thursday (both times in PST).
On the week, the Comets will host the IceCaps (Montreal’s affiliate). This was where I was expecting the Comets to face off against Zack Kassian, which would have been fantastic, up until he was told not to report and subsequently traded to the Oilers. Instead, Kassian will play in Bakersfield, a team the Comets will not play against this season.
Advertisement
Ad
Advertisement
Ad
At this point, the IceCaps sit 1 point above the Comets in the standings, with a record of 15-8-5-2. Both the Comets and IceCaps have scored 94 goals this season, although St. John’s has allowed 96 while Utica has allowed just 79. These two teams have met once already this season, with the IceCaps taking the game 2-1 in overtime. Saturday’s tilt starts at 4:00 pm Pacific Time.