Advertisement
Ad
The Statsies: Poor defence and goaltending bury the Canucks against the Jets 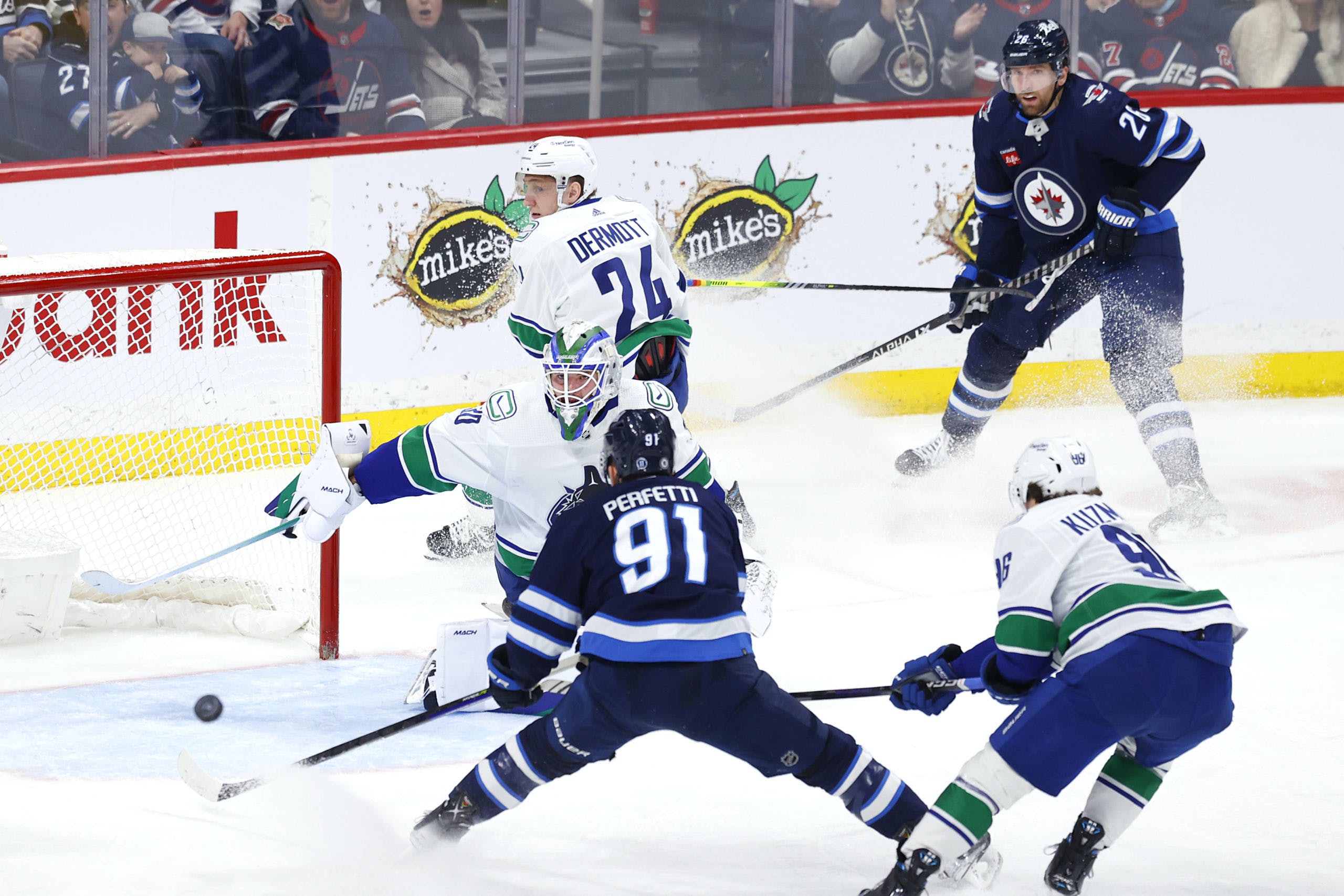 Photo credit: © James Carey Lauder-USA TODAY Sports
By Michael Liu
25 days ago
Comments
Be sure to check out NHL betting odds site Betway for the latest Canucks game day odds!
There wasn’t a shortage of goals in this one. Unfortunately, the Canucks come out on the wrong end of the result again.

Vancouver turned up in Winnipeg with a chance to avenge their loss from two weeks ago. Instead, they had another defeat handed to them by the Jets, this time losing in 7-4 fashion. While the goals were good, and the offence showed promising signs, the defence and goaltending proved to be the flaw that did the Canucks in. When you concede seven goals in a game, it’s not very often that you end up on the winning end of that result.
Here’s the loss, by the numbers.
As always, you can find our glossary guide of advanced stats here.

This game flow might be a surprise to most fans. The Canucks, across all situations, actually controlled the puck and generated good chances throughout the entire game. Besides the first period, where they were all squared up, the second and third finished with a Vancouver lead in CF% share and xGF%. They also had a narrow edge in HDCF (14-13), which helped them to a 3.74-2.63 xGF advantage across all 60 minutes. Normally, when a team is leading by a full expected goal, that gives them a very good chance at winning hockey games.
Advertisement
Ad
Advertisement
Ad
Of course, this is where the other shoe drops. Obviously the Canucks didn’t come out in front during this game, and much of that can be chalked up to poor 5v5 play. Though the power play gave them chances, they weren’t able to generate much momentum that carried over to even strength. Taking a look at the game flow at 5v5, it shows a clear picture of a Winnipeg Jets team that knew exactly how to handle this Canucks team, getting into the lead and holding their chances to a minimum at even strength. It’s yet another example of Vancouver getting outplayed with five skaters, in yet another loss they haven’t adjusted to. 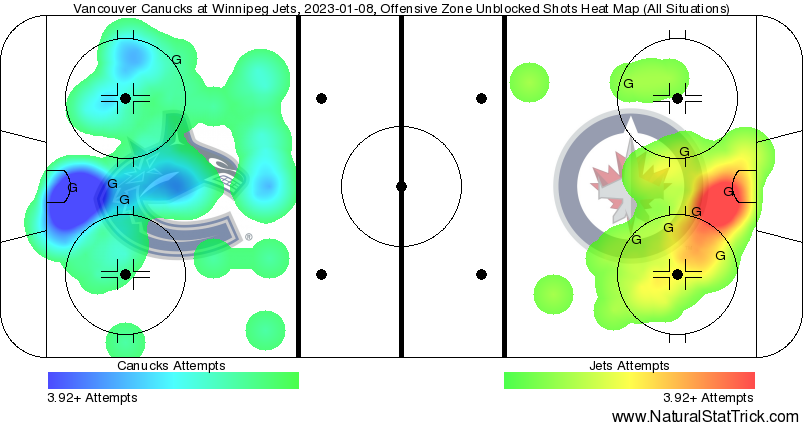 Again, across all situations, the Canucks looked like they did decent for themselves, the goals against notwithstanding. A good cluster of their opportunities came in tight, a total of 14 HDCF in last afternoon’s matchup. They actually did a solid job at a comeback effort in the third, as out of 9 scoring chances 6 of them were considered high-danger, leading to a 1.47-0.56 xGF tilt in Vancouver’s favour. Defensively, the patch the Jets generated was smaller than the Canucks’, though it was of similar density, suggesting that a lot of attempts came from a small area.
Advertisement
Ad
Advertisement
Ad
But yet, the 5v5 heat map shows a team that struggles to play at even strength. As soon as the filter is applied, Vancouver’s hot patch is reduced by half. Meanwhile, Winnipeg’s hot spot remains untouched, showing that the Jets’ opportunities were concentrated and more sustainable. This isn’t mentioning how some of their goals come from low percentage areas, suggesting shaky netminding between the pipes. The majority of the game is played at even strength, and if you’re getting outplayed for the majority of the game, then unfortunately it’s not likely you’ll win the game. 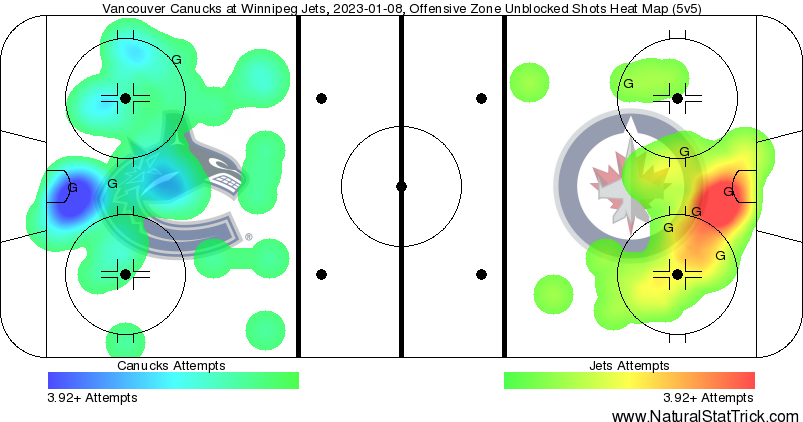 Corsi Champ: Quinn Hughes takes this edition of the Corsi champ, putting together a team-leading 71.43 CF%, a 33.69 CF% rel to his teammates in 26:04 TOI. Funnily enough, he was tied with Sheldon Dries who also recorded 71.43 CF%, but played less than half the TOI (11:12) and had a relatively lower CF% rel (22.05). A worthy shoutout, nonetheless.
Advertisement
Ad
Advertisement
Ad
Hughes was excellent against the Jets, on ice for two goals for while leading the Canucks in Corsi for (35), with JT Miller in second at a 29 CF. The defenceman also posted a 1.97 xGF, which was second on the team to Miller. While the offence and puck possession was promising, the defensive side could use a little work. Out of the 7 scoring chances that Hughes was on ice for, 6 of them were high-danger, something that will give sooner rather than later, especially at even strength.
Advertisement
Ad
Advertisement
Ad
Corsi Chump: After a surprising shutdown outing against the Colorado Avalanche, Curtis Lazar earns another Corsi chump title. This time, he ended the game with a 23.81 CF%, nearly 10% lower than second-last and putting him at a -37.92 CF% rel to the team average. Lazar’s numbers don’t get much better either, as his xGA was the highest on the team (1.51), and his xGF was the lowest (0.38). Essentially, the numbers show that Lazar was an offensive black hole and a defensive liability in this game. Out of 9 scoring opportunities, the Jets put 8 high-danger chances on goal with Lazar on the ice. To be entirely fair, the large majority of Lazar’s minutes came against the top 6 of Winnipeg. The question is why was he put into that situation in the first place when the results clearly weren’t there?

xGF: This one goes to Sheldon Dries, who has been quietly putting together some solid performances. He put a nasty tip past David Rittich, a well-earned goal with a team-leading 89.23 xGF% to his name. Dries’ raw xGF of 1.42 was only 5th on the team, but what stands out is the sparkling 0.17 xGA, the second lowest out of all Canucks. He was out on ice for two goals against, but the numbers suggest that Dries wasn’t entirely to blame for it. He kept them to low percentage opportunities while creating high percentage plays for himself. Dries had 8 scoring chances, 5 of which were HDCF. All around, a solid performance from the AHL callup.
Advertisement
Ad
Advertisement
Ad

GSAx: To be entirely fair, neither goaltender had much help in front of them defensively. But, they also didn’t do themselves any favours. Starting with Collin Delia, the magic ran out halfway through the second. In his time against the Jets, Delia faced an xGF of only 1.84. Since he gave up 4 goals on that, the GSAx works out to a -2.12 last afternoon. Three of the four goals were high-danger conversions, but the low danger goal is one he probably wants back. It just wasn’t the best outing, where Delia looked to be overplaying and out of position to compensate for breakdowns in front of him.

As for Spencer Martin, he wasn’t too much better, either. On three goals against, the Jets recorded 0.79 xGF. That means Martin also finished with a negative GSAx at -2.21. In total, the Canucks’ netminders cost them 4.43 goals, which definitely isn’t ideal considering that they lost this game by three tallies. Martin conceded one middle-danger goal and two low-danger ones, about par for what his performances have been in this stretch. The magic is wearing off of these netminders, and one wonders where this team would be if they had average goaltending and a defence that could play in front of them.
Advertisement
Ad
Advertisement
Ad

hard to imagine the goal-scoring is done for the afternoon. If you're the #Canucks, just keep shooting. If you're Spencer Martin, not sure he has the luxury of allowing another

Breaking up Hughes-Bear: Not because they’re bad, but because the rest of the defence is floundering. Quinn Hughes and Ethan Bear were the only two Canuck defencemen to finish the game above a 50 CF% share, in a game where they out-possessed the Jets nearly from start to finish.
Luke Schenn and Travis Dermott weren’t awful, actually managing to put up positive xGF% shares showing some good defensive metrics. They did struggle against tougher competition like the Jets’ first forward line and d-pairing, which is to be expected. However, the Tyler Myers and Oliver Ekman-Larsson pairing is rapidly disintegrating into a $13.25 million tire fire that bleeds chances. They might’ve posted better CF% numbers than Dermott-Schenn, but Myers-OEL also yielded three goals against, with higher xGA, in more minutes. Essentially, they’re controlling the puck a little more, but in more ice time, concede more chances and more goals than any other pairing. Spreading out Hughes and Bear would probably tank their numbers a little, but would go a long way in helping spread out the defensive depth.
Advertisement
Ad
Advertisement
Ad

I'm starting to think OEL and Myers aren't a core piece of the Canucks future.

Shutdown outing gone wrong: Andrei Kuzmenko, Elias Pettersson, and JT Miller were matched against Colorado’s top line last game, and they did a pretty good job. Bruce Boudreau tried the same thing against the Jets, but this time, it didn’t exactly take off. Kuzmenko-Pettersson-Miller was put up against Connor-Dubois-Ehlers, with Studnicka-Lazar-Joshua eating the rest of the minutes up (albeit not very well). Unfortunately, this Canucks unit got lit up when facing their matchup. The Jets were ruthless, making efficient use of their CF% advantage (52.00 CF%) to rack up three goals in the approximately 10 minutes of ice time against Kuzmenko-Pettersson-Miller. They weren’t able to prevent the high-danger chances from being created, and on top of that, low-danger opportunities were sneaking by Delia and Martin.
That being said, Kuzmenko-Pettersson-Miller was also the only line to make a negative net impact on Connor-Dubois-Ehlers. Without Pettersson matching up against him, Kyle Connor’s CF% jumped to 85.71, with similar increases observed amongst his linemates. It suggests that even in a game where they didn’t prevent goals from going in, a noticeable impact was made by their play. Unfortunately, the scoreboard tells the final story. Meanwhile, Studnicka-Lazar-Joshua finished with 0.00 CF%, getting completely outplayed and dominated in their 5 minutes of time against the same line.
Advertisement
Ad
Advertisement
Ad

CF% – 58.02% HDCF% – 54.35% xGF% – 51.58%
In a game where neither team’s netminding lived up to their expectations, the Vancouver Canucks came out worse, losing a dogfight to the Winnipeg Jets not because of the offence, but because of their lack of ability to stop things coming their way. It’s certainly an exciting way to lose hockey games, but a loss is a loss at the end of the day. With glaring warts becoming more and more obvious by the day, and a lack of adjustments being made, perhaps losing more wouldn’t be the worst outcome of all of this. After all, it might just force this team to look at itself in the mirror from time to time.
The Canucks will head to Pittsburgh on Tuesday as they face off against the Penguins.
Advertisement
Ad
Advertisement
Ad
Stats provided by naturalstattrick.com