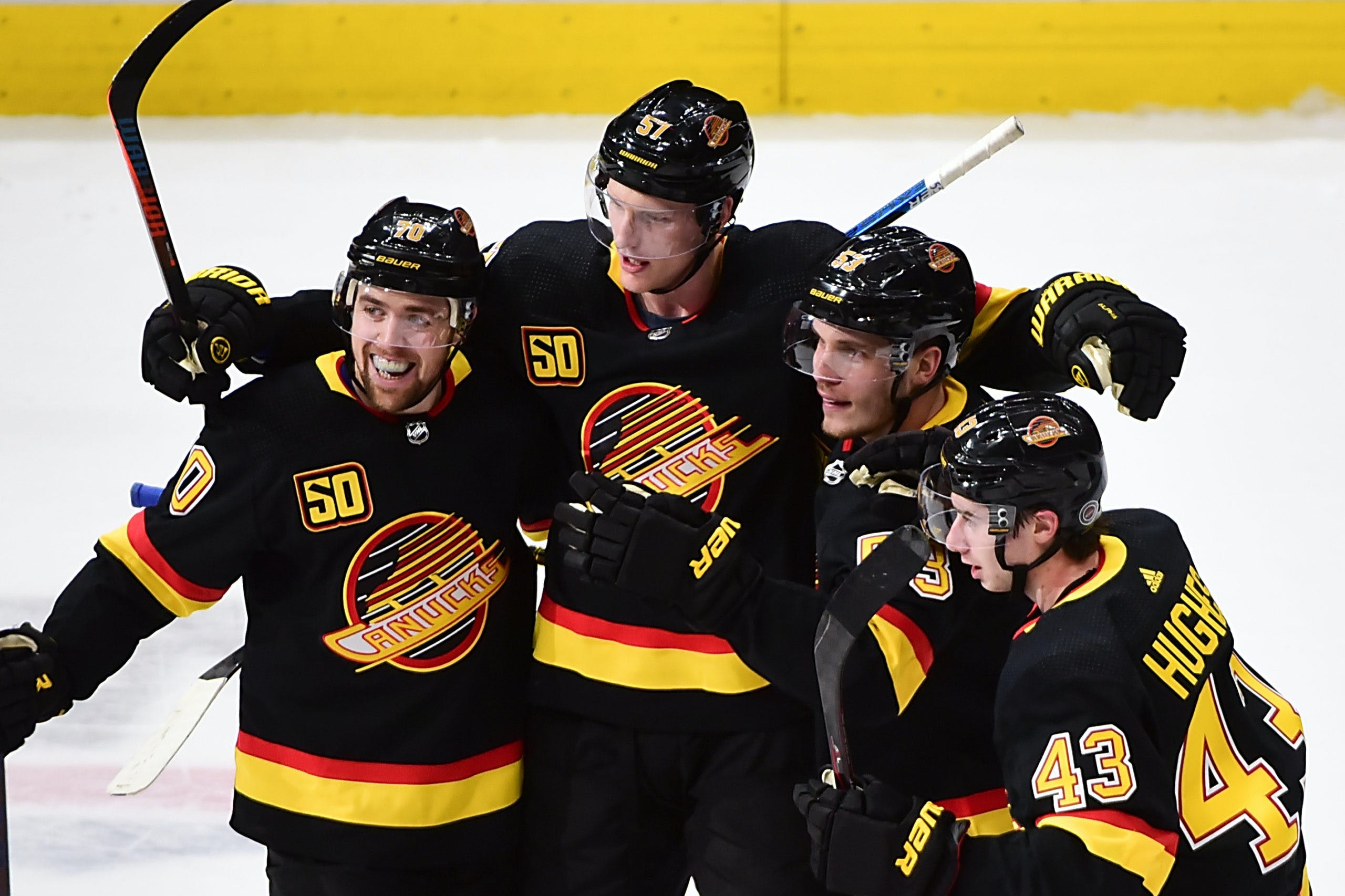 Photo credit: © Anne-Marie Sorvin-USA TODAY Sports
By Michael Wagar
2 years ago
Comments
It wasn’t exactly a 7-5 barnburner, but the Canucks will take the 2-1 win while looking oh-so-fly on Hockey Night.
Before puck drop in the last scheduled matchup between the two teams, the Canucks took the time honour some of the greats who represented the organization throughout the ’90s. Among the special guests were Gino Odjick, Kirk McLean, Jyrki Lumme, Dave Babych, Cliff Ronning and Greg Adams. The nostalgic ceremony also served as a great opportunity to see McLean whip out the old gear once again.
Meanwhile, the Canucks entered the night at in search of their 7th consecutive win against a Rangers squad who haven’t exactly enjoyed western Canada. The Rangers, losers of their previous two in Alberta, looked to right the ship before heading home. Tonight also served as the Canucks’ final home game before their five game road trip.
Advertisement
Ad
Advertisement
Ad
Both goalies had terrific games and set the tone for what would be a tight contest. Perhaps it was because we were coming off the heels of arguably the most thrilling game of the season, but this one felt uneventful until Tyler Myer’s go ahead tally with 1:29 remaining. What immediately followed was David Quinn’s timeout call and a lot of Rangers zone time, capped with a Pavel Buchnevich goal post to close out the remainder of the game.
The Canucks will no head down the Tampa Bay in search for their 8th straight win, while the Bolts gun for their 7th straight.
Lines
Travis Green understandably opted to run with the same lineup in this one. If it ain’t broke, right? The lineup decision also meant Jordie Benn missed his 5th straight game.
Advertisement
Ad
Advertisement
Ad

looking sharp in their black Flying Skate jerseys, #Canucks will go like this tonight vs NY Rangers in a 1994 rematch pic.twitter.com/LV2D2i8Wm8

Highlights
Antoine Roussel got the scoring started 1:46 into this one after Alexandar Georgiev wasn’t able to control the rebound. The goal ended the winger’s streak of five games without a goal.

"It's all about the little things"- Loui E #Canucks pic.twitter.com/qQuZH4mV1Y

With 1:29 remaining in the game, Tyler Meyers takes a feed from Horvat to wire it past Georgiev.

Tyler Myers with the late winner for the @Canucks!#HockeyNight pic.twitter.com/vQHHsx1L2J

Markstrom has been so good it's becoming comical.

Don't underrate the degree of difficulty on this save either. Hard to stack the pads when you're carrying the team on your shoulders. pic.twitter.com/7z9IYK1Gs9