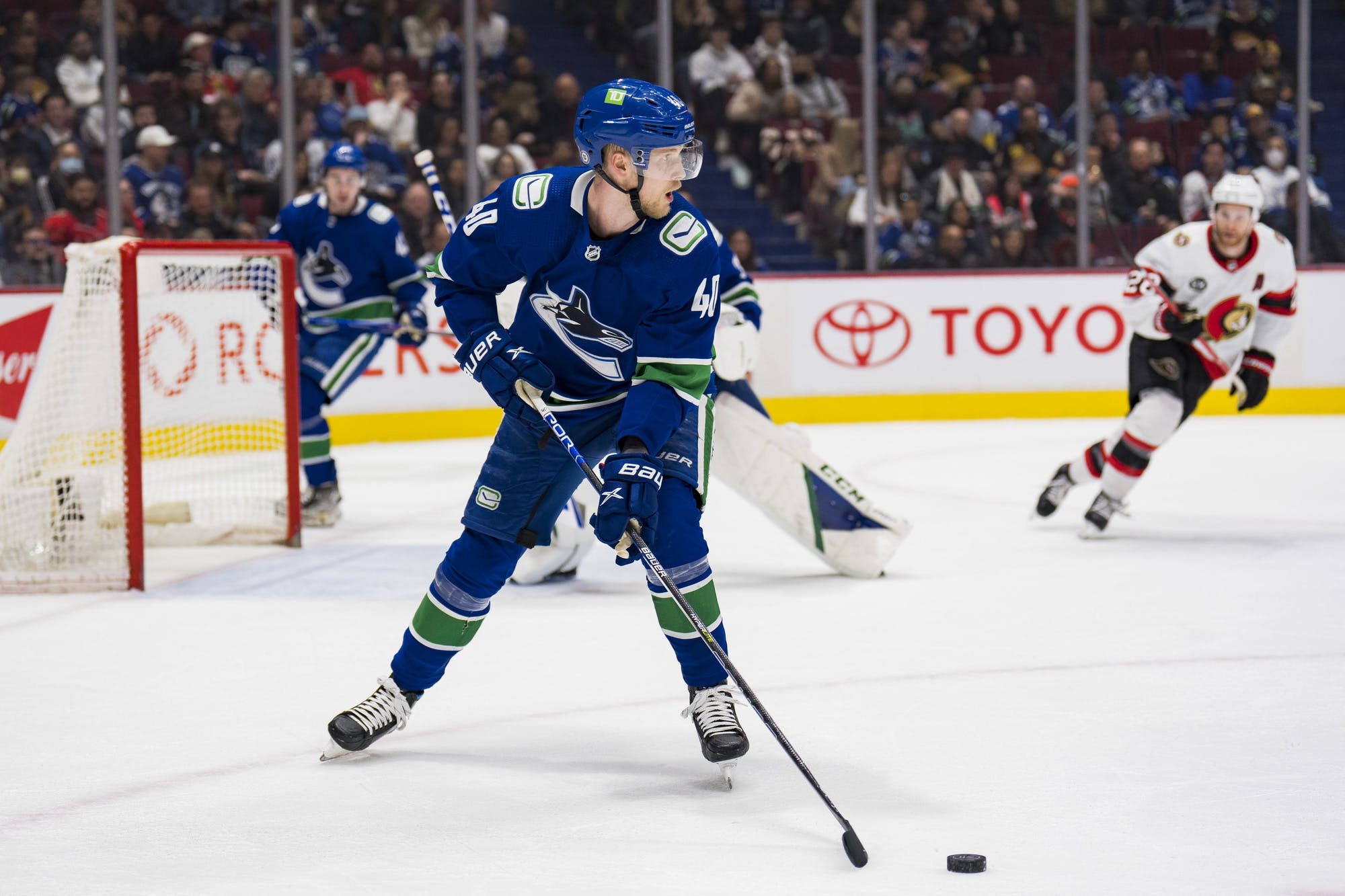 Photo credit: © Bob Frid-USA TODAY Sports
By Stephan Roget
9 months ago
Comments
A few weeks back, GM Patrik Allvin sat down for an interview with Patrick Johnston of The Province, and dropped a quote that raised its fair share of eyebrows in the Vancouver Canucks market.

Once more, my conversation with Canucks GM Patrik Allvin

"We don’t have the superstar. We’re not a contending team right now. So every single player has something to prove to us. And that’s going to be the mindset moving forward.”https://t.co/BvHKLVnCQv

“We don’t have the superstar. We’re not a contending team right now,” explained Allvin, “So every single player has something to prove to us. And that’s going to be the mindset moving forward.”
Now, it bears mentioning right off the bat that Allvin’s words were not meant to create controversy, nor to dig at any one player in particular. It was a general commentary about the Canucks’ current stage of development, and in specific reference to their salary cap structure, under which no player is yet making “superstar” dollars.
Regardless of Allvin’s intention, however, it’s fair to assume that Elias Pettersson took that quote at least a little personally. Not because of anything Pettersson has said or implied since, but because of what he’s done on the ice.
Pettersson’s remarkable mid-season rebound is not exactly news to anyone paying even casual attention to the Canucks in 2021/22.
Advertisement
Ad
Advertisement
Ad
He started out the season with a scant 17 points in 33 games through October, November, and December. Since then, he’s bounced back enough to get that statline, as of this writing, back up to a respectable 65 points in 76 games. That’s one off his previous two-time best of 66 points, meaning Pettersson needs just a couple more points to set a new career standard.
That’s impressive after such a slow start, but they’re still not superstar numbers. In order to see those, we have to apply a little extra context. Because it’s not just that Pettersson has turned his season around that is noteworthy, it’s how drastic that turnaround has been.
Let’s start with a few stats that some of our industry favourites pointed out in the wake of Pettersson’s two-goal performance against Minnesota on Thursday.
Advertisement
Ad
Advertisement
Ad

Elias Pettersson has 19 goals and 40 points in the last 30 games.

Just a tidy little 52-goal, 109-point pace for nearly half the season.

Cam Robinson noticed that, over the past 30 games, Pettersson has scored at a 52-goal, 109-point pace. Obviously, prorated stats only count for so much, but 30 games is a fairly large sample size, and 109 points would have Pettersson ranked somewhere in the top-five of NHL scoring if he kept it up for an entire season.
Daniel Wagner started the count at the moment that Allvin dropped his “no superstars” track, and the results were even more startling.

Elias Pettersson now has 9 goals and 16 points in 8 games since Patrik Allvin said the #Canucks don't have a superstar.

Nine goals and 16 points in eight games. Here, the sample size is smaller, but the numbers are undeniably strong. And we’re only half-serious in tying this recent hot streak to Allvin’s comments. A more direct motivating factor is probably the fact that the Canucks’ playoff hopes have been on the line all month long. But then again, that only serves to make Pettersson look like even more of a superstar.
Advertisement
Ad
Advertisement
Ad
Under the most pressure and the direst of circumstances, Pettersson is playing the best hockey of his career. Superstars step up in big-game situations, and that’s been true for Pettersson, even though the last dozen games in a row have been big-game situations.
Those nine goals in eight games are tied for the NHL lead over that same period. But Pettersson has been leading the league in goal-scoring for even longer than that. SportsnetStats noticed that Pettersson has scored more than any other NHL player since March 26, with 13 goals in that span.

Again, say what you will about sample sizes and proration. Those 13 goals in 12 games covers the entire stretch run of the 2021/22 season. It might not be extrapolatable over a full 82-game season, but it’s not just a “hot streak” either. We can look back at the entire latter half of Pettersson’s season and see that his turnaround has been complete, consistent, and seemingly permanent.
Advertisement
Ad
Advertisement
Ad
And, of course, stats are not the only measure by which we can assess Pettersson’s improved play. There’s always the good ol’ eye-test, and it speaks volumes about Pettersson as a genuine superstar.
He’s not just scoring like a star. He’s generating chances like a star, dominating the opposition for wide stretches of any given game like a star; he’s elevating teammates like a star, he’s impacting his team’s fortunes like a star.
Heck, Pettersson has even been providing what is arguably superstar-quality defence on top of all that scoring. Even his physical play has seen a noticeable uptick over the past couple of months. When we say that Pettersson is doing it all for the Canucks in their time of greatest need, we really do mean all.
It’s also worth pointing out that we, and other media-types, are not the only ones to have noticed.
Advertisement
Ad
Advertisement
Ad
Head coach Bruce Boudreau has, too.
Speaking to the press after the Minnesota game, Boudreau gushed about Pettersson’s perfectly-timed ascension.
“He’s a big game player,” enthused Boudreau, “He loves those games that are important and you can go back and look at all those games that are necessary to win, and he’s the leader of the pack as far as scoring. I mean, he comes to play and it doesn’t surprise me that he’s got 13 goals in the last 12 games and [it wouldn’t surprise] me if he didn’t have more. I mean, he’s played that well. So you know, hats off to him. He’s gonna prove to the world very shortly how good this guy really is.”
Goals, assists, points. Ice-time, plus/minus, cap hit. Corsi, Fenwick, xGA, QualComp.
Really, there are a wide variety of numbers that can be looked at when assessing whether a certain player is a true superstar. But the real measure, and perhaps the only one that should count, is whether or not that player makes a direct and consistent impact on their team’s ability to win games.
Advertisement
Ad
Advertisement
Ad
Isn’t that what it’s all about, in the end?
If so, Allvin may need to take another look at that “no superstars” comment in the wake of Pettersson’s late-season dominance.
Fortunately, the salary cap-related context of the quote still applies, and Allvin has two more seasons to go before he actually has to start paying Pettersson like the superstar that he so clearly is.
But that paycheque is coming — Pettersson has personally seen to that.