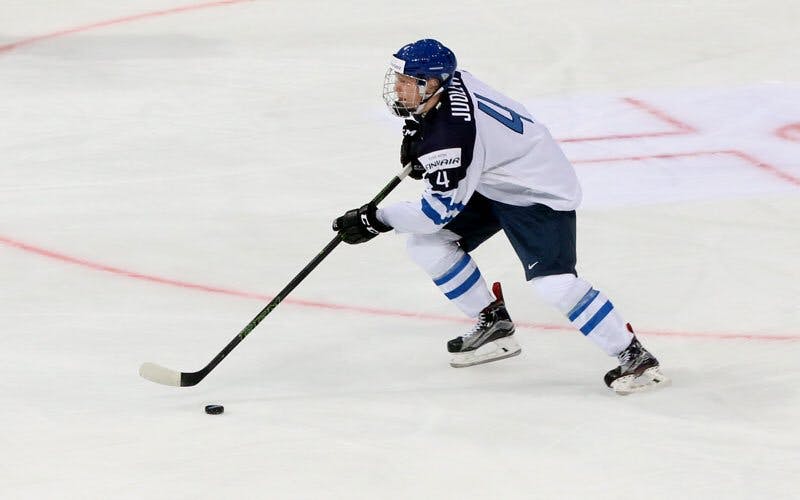 By Darryl Keeping
4 years ago
The third game of day five of the World Junior Championship matched up Finland Vs. Slovakia. It’s been well documented that Finland has been struggling to score goals with only six scored early in the tournament, did that change today? Lets take a look.
First period
The first period was uneventful. Slovakia was trapping and Finland was happy to dump the puck in and engage in battles for the puck down low.

Finland is more than happy to dump the puck in and work down low to get it to the point.

Might be why they only have 6 goals so far this tournament.

For all the talent Finland has they've looked pretty bland skill-wise so far.

If you’re here, you’re likely a Canucks fan and just wondering how Olli Juolevi did so I’ll jump into that. Boring games are Juolevi’s time to shine, and he did. Again, he was steady in the neutral zone, breaking up plays and forcing the opposition to dump the puck in. He was smart with the puck, effectively drawing in forecheckers and utilizing his speedy defensive partner to maximize controlled zone exits, a trait of fan favourite, Chris Tanev.
Advertisement
Ad
Advertisement
Ad
In the chart below, notice that Juolevi had the second highest controlled zone exit rate, trailing only his partner, Chicago 2017, first round pick, Henri Jokiharju. Furthermore, note that fail rate, one fail on 19  touches, not too shabby.  The lower total exit rate is because the rate is based off defensive zone touches. If you see a lower total zone exit rate paired with a low fail rate, it means that the defencemen are passing multiple times prior to the exit. To put it simply, more touches per exit equals a lower exit rate.

Second Period
With the game tied 1-1, Olli Juolevi did his part to help the struggling Finnish powerplay. I’d say this is the type of offensive play you’d expect Juolevi to contribute, nothing flashy, just a smart heads up pass leading to an easy tap in for Aapeli Rasanen to put Finland up 2-1 late in the second.

What a perfect pass. #Canucks pic.twitter.com/sq94ACA81E

Third Period
Advertisement
Ad
Advertisement
Ad
Florida Panthers draft pick, Aleksi Heponiemi scored to make it 3-1 at the 6:23 mark of the third period. It was his second goal and point in three games which is acceptable on most players standards, but from Heponiemi, I was expecting more production. Keep in mind this is a player who has put up an incredible 71 points in 29 games with the Swift Current Broncos this year. Watch for an increase in production from the 2017, second round pick soon.

Slovakia would score one to cut the lead to one, and then this happened, yikes! 4-2 Finland.

#CofRed prospect Adam Ruzicka scores off the faceoff… On his own net. 4-2 Finland. pic.twitter.com/AHvhOHLQ6K

Finland’s Markus Nurmi would add another one to make it 5-2 with a slick backhand shot for the final goal of the game.

Lots of shots from that loaded blueline. pic.twitter.com/Rb9LYqKcci