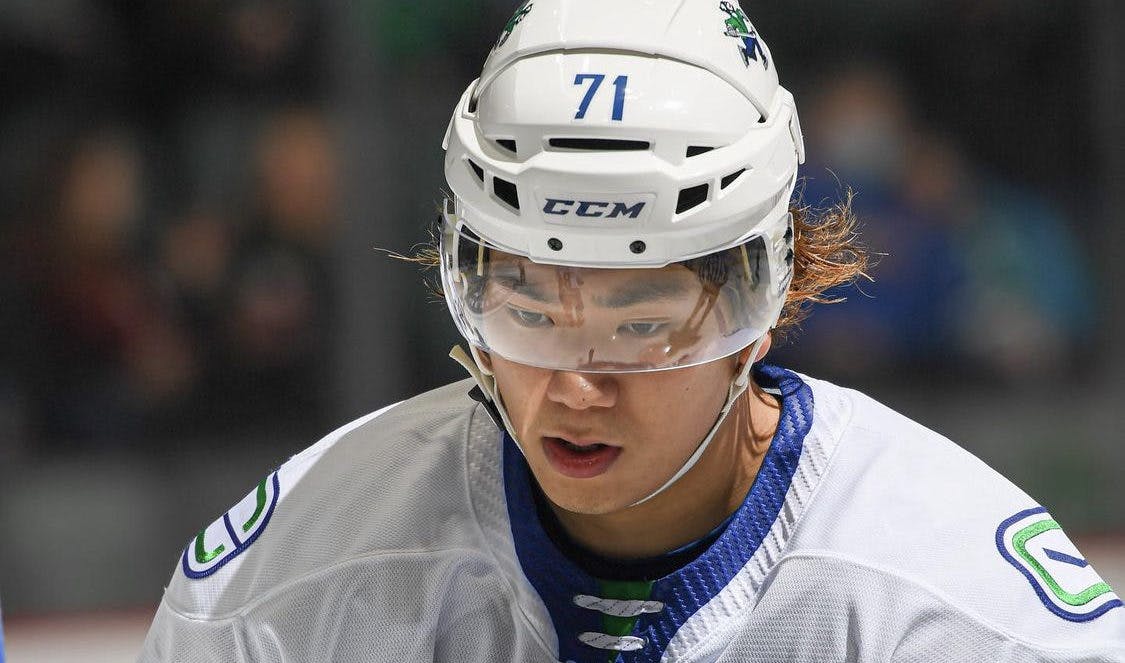 By Faber
10 months ago
Born and raised in Tomakomi, Japan, it’s been quite the ride for Yushiroh Hirano, who now finds himself playing for the Abbotsford Canucks in the American Hockey League.
Hirano signed a professional try-out agreement with the Abbotsford Canucks on January 5th and has found some early success at the highest level of hockey he has ever played in. It took four games and 10 seconds to score his first AHL goal.
Just 10 seconds into Abbotsford’s January 22nd game against the San Diego Gulls, Hirano made history as the first Japanese-born player to score a goal in the AHL. The crowd was electric as Hirano skated down the left wing and received a pass from one of the Canucks’ top-scorers, Nic Petan.
Petan is a veteran in this league and he had nothing but good things to say about Hirano when asked about him after the game where Hirano made hockey history.
“To get to this level is impressive,” said Petan. “I’m sure it’s not an easy path. It’s an interesting story and he’s a great kid with a heck of a shot. I tip my hat to him.”
Though you may have expected to hear that Hirano was a standout player in his younger days, that isn’t exactly the case. He was a good player in Japan but the trait that continues to help him move to the next level is his work ethic. He used that work ethic to get him to Sweden where he really began to see his game blossom.
“I was never the best but the thing that separated me from the others was my work ethic,” said the 26-year-old Hirano. “I worked harder than the other kids. Playing in Sweden’s Top Junior was a great experience. That made me mentally strong, especially when I couldn’t speak the language at all.”
Hirano’s play in the Swedish J20 league led him to land a spot in the USHL, where he truly began to put up big numbers. Hirano scored 24 goals and added 22 assists in 54 games during his one and only season with the Youngstown Phantoms. From there, he went back to Japan and played in the Asia League for a year and a half and then bounced back to Sweden to play in the Divison 2 league.
Through his travels, Hirano’s game continued to improve. It improved so much that he earned a spot on the Wheeling Nailers for the 2018-19 season. He finished the year as the second-leading scorer on the Nailers and even made his debut in the AHL. The move to North American pro-hockey made a world of difference in Hirano’s development as he found confidence in his own game.
“I was very excited,” said Hirano. “I could finally play in an environment where I could be seen to get up to a higher league and take my game to the next level. I took big strides this offseason. I focused on what could take my game to the next level. Things like stick handling, reaction speed, and shot release.”
This past offseason saw another huge jump in Hirano’s game as he showed up for his ECHL season this year and was the best player on his Cincinnati Cyclones team. He had 29 points in 25 games before getting signed by the Canucks on January 5th. Hirano earned the title of ECHL player of the week for the second week of December where he had six goals and five assists in four games.
Hirano now has two goals in his last four AHL games and is getting an opportunity to play with some of the Abbotsford Canucks’ best forwards in a top-six role.
When asked which player he strives to play like, Hirano said that Jamie Benn is a player he wants to play like and said that the skill that he is most confident in is his shot.
Hirano wants to make hockey more of a sport of relevance in Japan and says that the sport’s hype has been dying down lately.
“Hockey has been less popular in the last 10 years,” said Hirano. “There are many things that are lacking in the current Japanese ice hockey world but hope one day we can excite the people of Japan again. When I was young, there weren’t many club teams.  The teams were divided into elementary schools, and there were only about six teams in each area.”
His recent highlight-reel goals have found their way into the Japanese hockey fans’ social media feeds and Hirano has quite the following in his home country. No Japanese-born player is playing at as high of a level as Hirano and his goal is to one day get to the NHL on the back of his strong work ethic.
As for his time in Abbotsford, Hirano has loved it so far and enjoyed the company of a few specific players.
We have had a lot of games recently,” said Hirano. “I haven’t been able to get out and see the city yet but love the fans who have welcomed me with open arms. One thing I have noticed [about Abbotsford] is its beautiful view of the mountains. Everyone is nice to me. Tristen Nielsen drives me from the hotel to the rink. Nic Petan and Jack Rathbone talk to me and help me a lot.”
Hirano is still just on a professional try-out but he has impressed the most out of all of Abbotsford’s PTO signings through their battle with COVID. The Japanese sensation is scoring goals for the team and is gaining experience with every passing day. It will be interesting to see if he sticks with the team for the remainder of the season as he looks to earn the coach’s trust and play out the remainder of the year in the AHL with Abbotsford.
Uncategorized
Recent articles from Faber