WWYDW: What Canucks storyline isn’t getting enough attention heading into 2021/22? 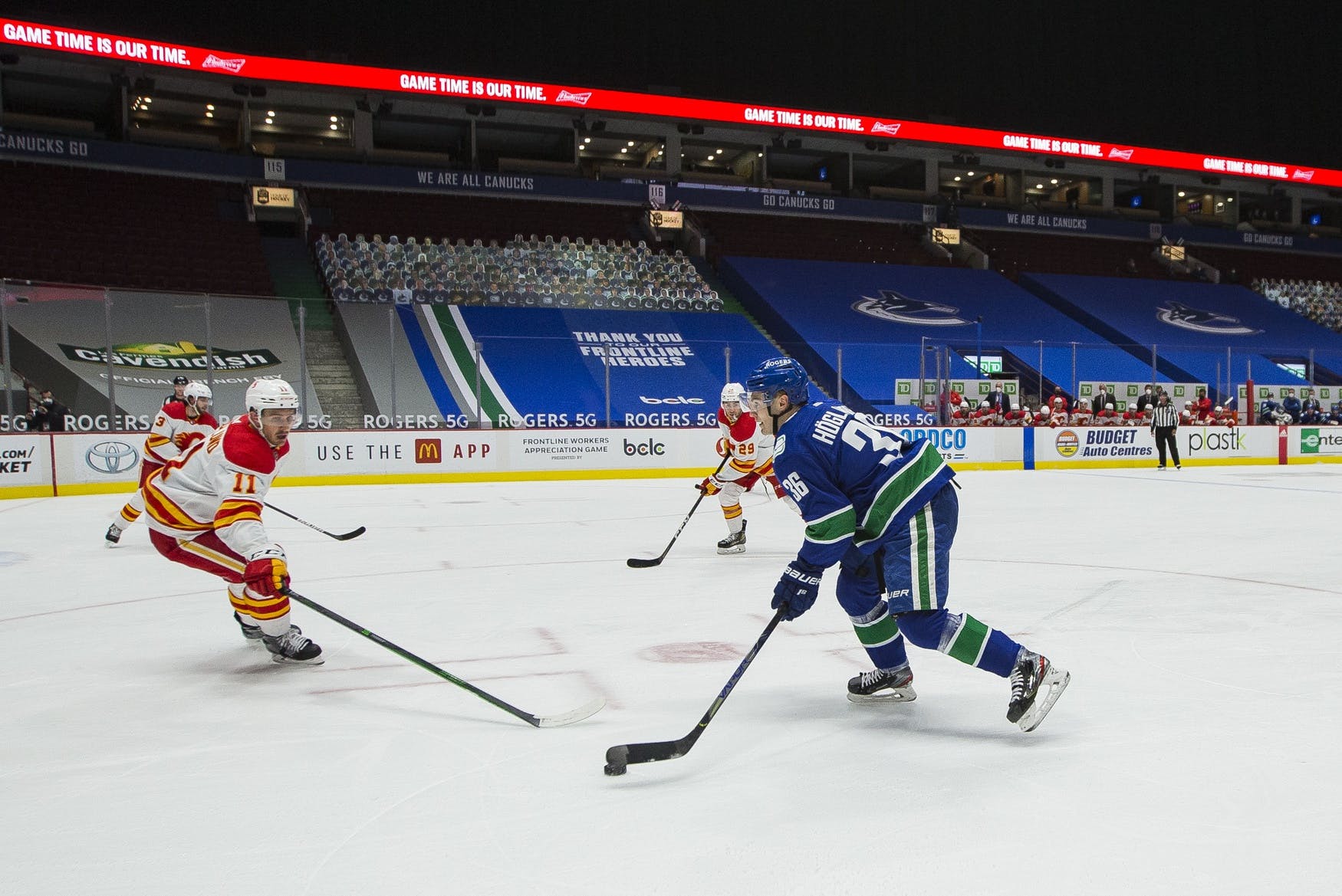 By Stephan Roget
1 year ago
Welcome back to WDYTT, the only hockey column on the internet that’s perpetually on a professional try-out.
Speaking of try-outs, the 2021 training camp season is upon us, and we at CanucksArmy are hard at work delivering daily Canucks-related content right to your web browser of choice. After perhaps the most dramatic season in franchise history, there’s no shortage of new and continuing storylines to track heading into 2021/22, and we’ve done our best to cover them all — whether that be the arrival of super-rookies like Vasily Podkolzin and Jack Rathbone, the reconfiguration of the team’s blueline, or the ongoing contract negotiations of Elias Pettersson and Quinn Hughes.
But, like this past offseason itself, we’re not perfect, nor are we incapable of oversight. Chances are pretty good that we haven’t quite covered everything that you think has been worthy of coverage. Chances are pretty good that there are at least one or two storylines out there that we haven’t paid quite enough attention to.
Well, let’s do something about that.
This week, we’re asking you:

What Canucks storyline isn’t getting enough attention heading into the 2021/22 season?

Your boldest predictions are below!
Hockey Bunker:
First in their division. I’ll leave the individual predictions to everyone else.
Beer Can Boyd:
Top end: they finish 2nd in the division and win a playoff round.
Bottom end: Demko gets hurt, they miss the playoffs by a wide margin, and the GM and coach both get fired at the end of the season. That ought to cover all the bases!
Burnabybob:
Here’s my bold prediction: The Canucks will win the division and make it to the Conference Final, where they will lose to Colorado. They still don’t have the defence to be considered a truly elite team, but their offence and goaltending will take them pretty far.
Killer Marmot:
(Winner of the author’s weekly award for eloquence)
The defence will seem greatly improved.
It seems counterintuitive, as little occurred to the defense in the off-season that warrants this. But hockey teams are, well, teams. Everything’s connected. Improvements in one area often produce improvements in others. The biggest problem the Canucks had last season was that the bottom fell out of their bottom-six forwards, and the defence got beat up trying to deal with this. If the bottom-six improves, the defence will suddenly seem a lot better.
This prediction is worth everything you paid for it.
Obiweskenobi:
It is revealed at the end of the season, when the Canucks have hoisted the Cup, that JB has Dr. Strange level abilities to look into the future and see all possible futures. The path he took on day one of his tenure is the one of 14,000,605 possible futures, that would lead us to the Cup. But if he told us it wouldn’t happen. 👆
Bing Qiu:
Petterson and Hughes sit out the season as agent Brisson is demanding too much in the flat cap. One would think it’s game over, but Rathbone, Podkolzin, and Gadjovich step up to lead the team and Miller becomes the number one center we all knew he could be.
Killer Marmot:
After putting on weight during the COVID epidemic, Fin is placed on a strict no-child diet. This makes him grouchier than usual, and he starts wearing opposition sweaters and taunting Green from behind the bench. Green eventually loses patience and stuffs a puck up Fin’s blow hole. A bench-clearing brawl ensues. This causes Bettman to bar cetaceans as mascots, a rule that he imposes retroactively starting from 2001, resulting in a massive cap penalty for the Canucks over the next decade. The resulting hockey riot on Granville Street causes the franchise to be moved to Midland Texas. Oddly, they continue to call themselves the “Canucks”, although the locals mispronounce it as “Canukes.” They also keep the Orca logo but insist it depicts a large-mouth bass, an explanation Bettman accepts. Fin, now called “Bassy”, eventually drops some pounds thanks to his “Buns Of Steel” workout videos and the poor flavour of Texas kids.
El Kabong:
Boldest Canucks Predictions 2021/2022:
Bo Horvat : 35 Goals
EP: 40 goals
Demko: Vezina
Hughes: 28 Games played, injured
Pod: Second in Calder votes
steviewire:
Podkolzin scores his first goal during my annual outing to see the Canucks taking on the Oilers. During the celebration, I spill a beer on the lady in front of me. Much embarrassment ensues.
Bartholomew Gimble:
Here’s bold. OEL and Rathbone have solid camps. Canucks trade Quinn to Devils for Ty Smith and Dev’s 1st and 3rd round 2022 pick.
tomsawyer:
My pre-season prediction:
EP40 signs at 3×8
Hughes signs at 8×8
At some point during the season during a boring game, John Garrett starts talking about Kraft Dinner and melting Cheeze Whiz on Ritz crackers as one of his favourite snacks.
Craig Gowan:
The Canucks will finish 2nd place in the Pacific division, edging out Edmonton, and defeat Edmonton in Round 1 of the playoffs. Vegas will stop them in the 2nd round.
Defenceman Factory:
I can see both good and bad extremes as possibilities this season. We hear enough doom and gloom. So, I’ll predict on the positive side.
The offence thrives and the Canucks are one of the top-ten in goals for. They actually adopt a bit of a cycle game, puck possession, and o-zone time improve dramatically. Podkolzin takes 15 or 20 games to get his feet under him, but by January is a tour de force on the 3rd line. That line takes many top line match-ups and still holds a goal differential of even.
Improved defensive systems allow the D-corps to hold their own. Controlled zone exits go way up contributing to strong possession stats. PK is above average. OEL adopts a more defensively responsible role under Shaw’s direction. Poolman, Hamonic, and Schenn look fine and even Myers buys in and earns some redemption. Hughes shows improvement and more defensive responsibility. Juolevi reports to camp and he is jacked from being to train intensively for several months. Rathbone blows up the AHL and gets 20 games with the big club filling in for injuries.
The Canucks finish 2nd or 3rd in the division and win two lengthy playoff series. Attrition of the D costs them the Conference Final. Benning finishes 3rd in GM of the year voting.
Kanuckhotep:
All kidding aside, the Canucks will finagle a wildcard spot in the Western Conference and most likely have to face Nate Mac, Makar, and the boys from COL. Not a pleasant prospect, but everyone significant has to stay healthy to even get to this point. McOliers will remain the eternal mystery and much hinges on what these guys do in this division. VGK may be on the verge of what happened to the Hindenburg in May of 1937, as they’re on their last legs. I mean, where is Cody Glass now?
james:
Van wins the Cup.
Duncan Stewart:
Sedins play again!
Uncategorized
Recent articles from Stephan Roget