Will Lockwood just had the game we’ve all been waiting for, but can he do it consistently? 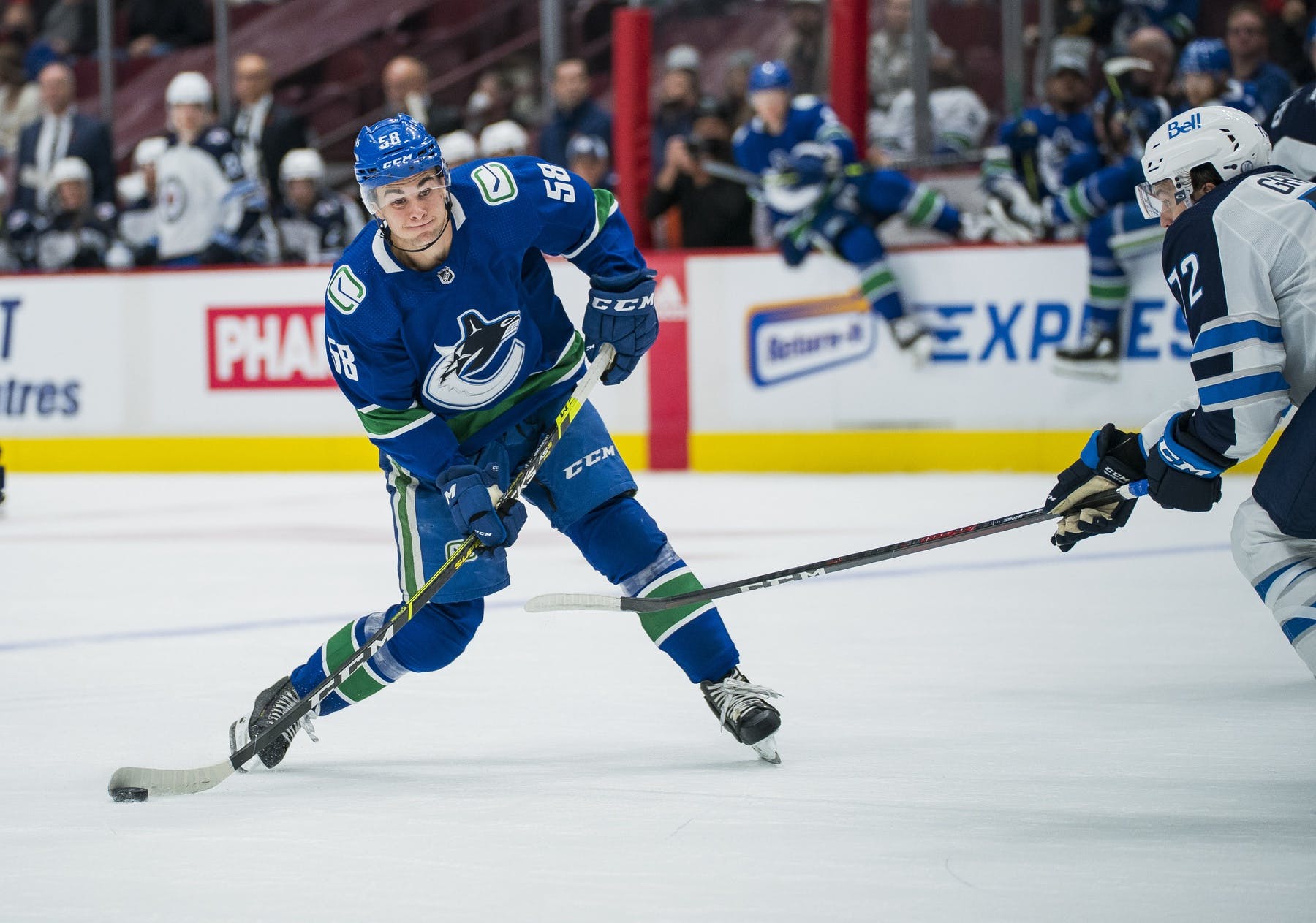 By Noah Strang
21 days ago
Drafted in the third round of the 2016 NHL Entry Draft, Will Lockwood has taken a long road to the NHL. The speedy winger spent four seasons at the University of Michigan before making the transition to professional hockey, debuting with the Utica Comets during the 2020-21 season.
In recent seasons, Lockwood has been a player inside the organization that has attracted a lot of attention, both from management as well as the fanbase. His great skating ability and willingness to take the body make him an effective forechecker despite being listed at under six feet. He was seen as having desirable characteristics that the Canucks’ bottom-six has been short on in recent years.
However, Lockwood has struggled to make that final jump to become a consistent NHL player. To give him credit, it’s an extremely tough transition. But during the 15 NHL games he played between the 2020-21 and 2021-22 NHL seasons, he didn’t show a whole lot to get excited about. There was certainly some concern that he could max out as a “tweener”, fitting in between the AHL and NHL levels.
However, during his first NHL game this season against the Buffalo Sabres, Lockwood showed that he has the ability to be a great bottom-six player. He was all over the ice and was very noticeable. He even managed to pick up his first NHL assist during the process. This has led to some rekindled excitement around his future with the team.

Prior to this season, Lockwood had appeared in 15 NHL games. During those games, he recorded just over 170 minutes of 5-on-5 ice time, giving us a small sample size to look at. He finished those games with a grand total of zero points as he didn’t even manage to grab a lucky secondary assist.
On a team level, his impact wasn’t any better. The Canucks controlled just 38.46% of the scoring chances with him on the ice during that time. They were also outscored 8-3 by their opponents.
It was obvious that Lockwood had the speed required for the NHL, but he seemingly couldn’t put it together to be impactful. With the Canucks adding bottom-six options like Dakota Joshua and Nils Aman during the offseason, it felt as if chances might be running out for Lockwood.

This season, Lockwood has had the best start to any professional campaign across his young career. Playing under new head coach Jeremy Colliton in Abbotsford, Lockwood started out the season on fire. It’s clear, both from his play in the AHL and the NHL, that he has more confidence in his game.
Over 10 games in Abbotsford, he managed to score five goals and add two assists. This is a level of offensive production that he’s never shown in the past, rivalling even some of his college numbers. Those five goals came in a stretch of three games where he looked particularly unstoppable.
Lockwood’s improved performance this season in the AHL obviously caught the attention of the big club. When forwards kept falling to injury, it was only a matter of time before he would get another chance to prove himself in the NHL.

His performance against the Sabres and rest of season outlook

Lockwood’s season debut against the Sabres went as well as anyone could have hoped for. He managed to get his first NHL point, an assist on a beautiful passing play that was finished off by Dakota Joshua. That line — Joshua, Lockwood, and Aman — was one of the Canucks’ best in the 6-5 victory.
“Lockwood played really good for us for his first game of the year,” Bruce Boudreau commented following the win.
If Lockwood can put together more performances like this one, he’s well on his way to carving out a role as a bottom-six contributor. If he continues to grow and evolve, the Canucks could have the next Jannik Hansen or Tyler Motte on their hands — a speedy winger in the bottom six that can change the momentum of a game at any second.
Editorials
Recent articles from Noah Strang