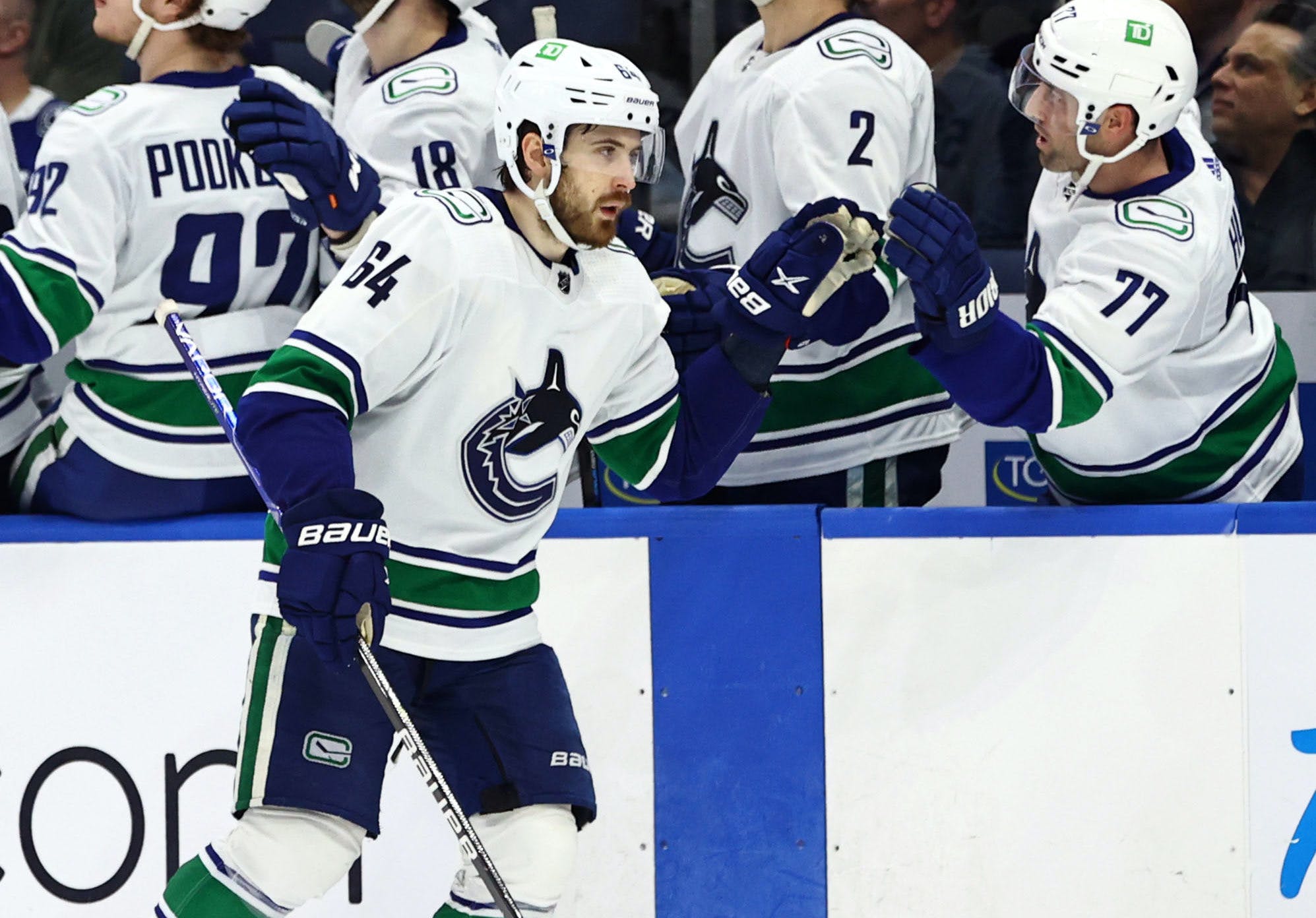 By Colton Davies
11 months ago
Port Huron, Michigan product Tyler Motte has become a locker room staple for the Vancouver Canucks since being acquired in 2017-18. The 26-year-old’s name has recently popped up in the rumour mill as we approach the NHL trade deadline on March 21st.
Motte was originally drafted in round four of the 2013 NHL Draft by the Chicago Blackhawks. Prior to making his NHL debut, Motte spent 3 years at the University of Michigan, winning one B1G Championship and in his final season, he registered 56 points in 38 games with fellow linemates and future NHLers Kyle Connor and J.T. Compher.
While Motte’s numbers in the NHL haven’t been exceptional by any means, he’s dug deeper into his toolkit and changed his style of play to better fit his current role. A Swiss Army knife, Motte does it all for his team, he blocks shots, throws big hits, and is ruthless on the forecheck. He’s one of the better all-around grinders in today’s NHL. He led the Canucks in hits last season and currently sits at 60 on the season so far.
At 5’10 and 192 pounds, Motte is not your typical guy to lead a team in hits, but he’s a wrecking ball on skates.
“Some people might be surprised because of my size, but that’s been my game. And it’s pretty clear my role on a lot of nights is to make the other team’s night hard — whether hard on the body or hard in the D-zone or finishing checks,” Motte told Postmedia News. “It’s not where I go out every night and say I want four or five hits, but if the opportunity is there I’m going to take it.”
Not only does he display raw skill as a grinder, he still has untapped offensive-potential waiting to be unleashed. Remember, he scored 32 goals in the NCAA during his final year, that’s a testament to his goal-scoring ability, something that Boudreau could potentially unlock if given the time to do so.
This season, Motte has 13 points (six goals, seven assists) in 36 games.  Elite Prospects has Motte projected to hit 24 points ( 11 goals, 13 assists) if he reaches that benchmark he would set a new career-high in point totals surpassing his 16 points in 74 games that he achieved in 2018-19. The other great thing about Motte is he is a cheap and affordable player, his cap hit is $1,225,000 — something the Canucks can continue to work with in the future.
Motte has also played a huge role in the community, especially being a mental health advocate. Last year, Motte opened up about being diagnosed with anxiety and depression, something that he knew he could trust the Canucks with. Now, he is an ambassador for Hockey Talks’ which is a mental health program that is dedicated to former Canuck Rick Rypien who passed away in 2011.
Motte described going through highs and lows, especially after transitioning from the NCAA to the NHL where he had been a prolific goal scorer and was ranked 2nd in the country during his final year. It all changed when he got to Chicago and was given little playing time. Unfortunately, his time with Chicago was short, he was then traded to the Columbus Blue Jackets where he once again struggled and was ultimately sent down to the AHL before being traded to the Canucks in exchange for Thomas Vanek.
Motte was faced with an increasing amount of pressure and adversity, especially after being traded three times in one season. It’s a lot of change for an individual to take on and he knew he needed to make a change. After landing in Vancouver, he changed up his game and has since become a fan-favourite and top locker room guy.
The relationship between the Canucks, the fans, and Motte is something that doesn’t happen too often in the sports world. His pure dedication to his craft and drive to get better every day should be enough to prove his worth to the Canucks. Tyler Motte needs to stay with the Canucks as this is just the stepping stone for what he can contribute to the team.
Uncategorized
Recent articles from Colton Davies